As the Tucson summer sets in, we continue backpacking as long as we can by aiming for the high country in northern Arizona and southern New Mexico. This spring we had scheduled a trip to Whitewater Baldy in the Gila Wilderness, but meanwhile the Whitewater Baldy Fire mushroomed into the largest wildfire in New Mexico history.

On our way to Albuquerque to view the Annular Solar Eclipse, we took a short hike in Railroad Canyon and discovered the Aldo Leopold Wilderness. A-L is a relatively new wilderness area, designated in 1980 and occupying about 200,000 acres directly east of the much larger Gila Wilderness.

The area appears to receive very little traffic, and online research yielded limited results. We pieced together an itinerary as best we could, targeting a loop that would begin at Emory Pass, lead us up and over Hillsboro Peak, and then back to NM 152 via West Railroad Canyon. 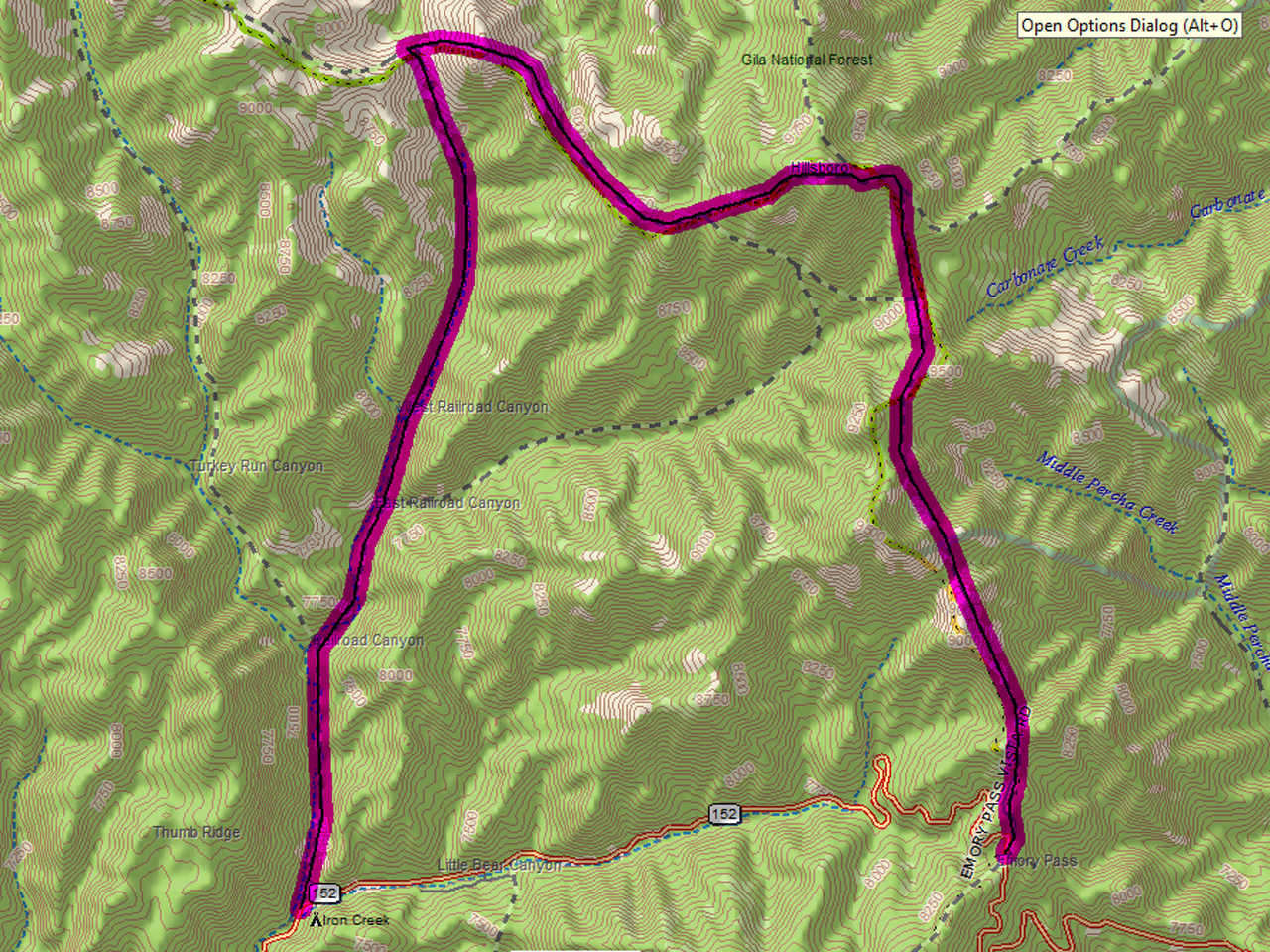 We camped at the very scenic Lower Galinas campground, and were astonished that we were the only campers on a lovely summer evening! The next morning we completed a complex car shuttle and began our hike. Almost immediately we found ourselves in a lush Ponderosa pine forest virtually untouched by the fires that have raged through much of the Southwest in the last decade. The trail winds along a ridge most of the way to the summit, yielding fabulous views west toward Silver City and east all the way to Elephant Butte Lake. Although the weather was warm, abundant shade and winds gusting to 40 mph made for comfortable hiking.

We ate lunch on a shady knoll, and Ann and Rosa turned back, having very successfully completed their first big hike together.

The last mile was relentlessly steep, and our pace slowed to a crawl and the older folks among us (me and Dennis) struggled to catch our breath. We arrived at the open summit about 4:00 pm and received a warm welcome from Don, the fire lookout on duty. Although the Hillsboro Peak trail is the most popular in the Black Range, Don said he hadn't seen another person in three days! We were all offered tours of the tower, a simple affair with a single 7' x 7' room. There's no road to Hillsboro Peak, so Don hikes in for his eight-day shift, although a helicopter delivers staples such as propane and water.

We settled in on the porch of the former lookout cabin, a 1925 log structure built by the CCC with a view so vast it's almost surreal. As evening approached, we could see the twinkly lights of the tiny mountain villages of Kingston and Hillsboro, and beyond that, the soft glow of the Chihuahuan Desert.

Patty and Gloria each opted for a porch, while Jeff, Julia and John set up their tents near the corral. Dennis and I decided to stay in the cabin just for the experience, but the wind picked up during the night to the point where we fully expected it to tear off sections of the roof any minute. A determined packrat added to the commotion, and just about the time we dozed off, a bright orange moon popped into view and lit up the cabin like daylight.

We set out the next morning with some trepidation, since Don warned us a bear was frequenting the trail just west of the tower. We know the trail hadn't been maintained in over a year, but found it to be in quite good shape, clearly marked and with very little deadfall.

This section of the Black Range Crest Trail is a steady downhill under a dense forest cover almost all the way to Holden Prong Saddle. We stopped at the Saddle for lunch in a open field in a forest of blooming locust trees. Here, as elsewhere along the trail, we saw many varieties of butterflies, and one of them adopted John and accompanied him for part of the hike into Railroad Canyon.

West Railroad Canyon was the only disappointment of the trip. Although the lower section is lovely, the upper section is steep, exposed and stony, perhaps because so many cattle are pastured there.

Our fellow hikers were a delight, as always, and can't wait to plan another trip to this area!