This year I ended up with an unexpected 12-day break from work at the end of the year. What to do with this incredible windfall? The answer was not obvious. We have a long, long list of tantalizing destinations, but most of them have either too much — or else not quite enough — snow at this time of year. For three weeks, we talked about it over coffee, made notes on our iPads, e-mailed each other links to various websites. A sudden winter storm blew away some of our plans, and in the end we didn't decide where we were going until the morning of our departure.

It was 45 degrees and spitting rain and sleet as we headed out of town on the shortest day of the year. Not exactly an auspicious beginning for a multi-day camping trip.

Our goal was simply to explore some of the less-known backroads of southeastern Arizona and southwestern New Mexico — those intriguing dotted lines on topo maps that we pass by on our way to better-known destinations, but never have time to follow.

Our first target was the confluence of Bonita Creek and the Gila River. The Gila and its tributaries are the Southwest's circulatory system, drawing down water from the Mogollon Rim and making life possible in southern Arizona and New Mexico. Yet much of the Gila is maddeningly inaccessible.

"Don't bother asking for directions," quip the authors of "Arizona Journey Guide." "Local residents know nothing about this gem in their backyard."

We arrived at the Gila Box overlook just as a band of golden sunlight shot out from below the troubled sky and lit up the cottonwoods on either side of the stream. We wandered the backroads, rolling across mesa tops and dipping in and out of side canyons, until we ran out of daylight on a cliff above Bonita Creek. We parked the TacoMa on the flattest spot we could find, in the shadow of crenelated cliffs that resemble ancient stone silos.

Pinaleno Mountains from Gila Box after a sudden winter storm. Note the above image is scrollable.

It was a very long night, and we waited until the first rays of sun lit up the thick coating of frost on all the windows to roll out of the truck. Then we were off to New Mexico to rendezvous with friends from Silver City. We'd heard reports of some nice petroglyphs atop a non-descript mound overlooking the Gila River. Access is via a long and nasty 4WD road that passes through several well-closed gates and a small feedlot before deteriorating to a two-rut track studded with bayonets of basalt. But once we inched our way to a saddle, there were dazzling views of the shimmering Gila River below us, and in the distance, the Big Burro and Mimbres Mountains, snow-capped after a recent winter storm. We parked the trucks where the road disappeared completely, and hiked the last mile or so to the summit.

Even at a distance, we could see that the summit was a tumble of jagged rocks, many of which were etched with petroglyphs. And they were petroglyphs unlike any we had ever seen — dramatic zig-zags, grids, chevrons and spirals that reminded us of the geometric patterns typical of Mimbres pottery. There is speculation that these cliffs were pecked and carved by the Hohokam who occupied this area between 200 and 500 AD.

We camped that night near the base of the mountain, and set out after a leisurely breakfast in search of additional petroglyphs on cliffs above the GIla. Although we did not locate the mother lode, we had a great time tromping around the southern slope all the way down to the river.

To top off the day, we made our way north via an equally toothy 4WD trail to an intriguing rock formation with more pockmarks and voids than our morning's oatmeal, and watched the sun set over the mountain through an intriguing rock window.

What if all the roads I never had time for lead to places of such breathtaking beauty? 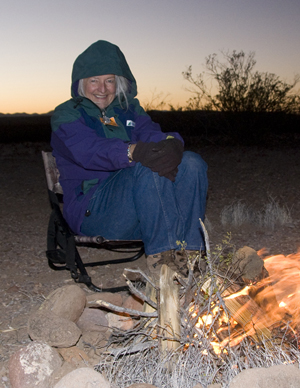 After a couple of days of errand-running and cat-petting, we were back on the road, with clean clothes and a fresh bag of ice, to continue our exploration of the Gila River in southwestern New Mexico. Having apparently not suffered enough during the first part of the trip, our friends from Silver City elected to tag along for the second part as well.

Our plan was to rendezvous in Duncan, AZ. But since we were running late, we took a "shortcut" via a backroad that heads north out of Steins. It started out well and quickly deteriorated to a two-rut track, but offered a nice preview of the Peloncillo Mountains, another area on our hit list.

Meanwhile our friends scouted various routes to the river from the south side, and found locked gates across most of them. A friendly rancher gave them directions via a roundabout route, and we met them at the junction.

As usual, we tracked our progress with the aid of a GPS hooked up to the Mini, and CalTopo showed a 4WD track all the way to the river. For the second time in one day, I would be reminded that topo maps lie. Our road essentially dead-ended on a small knoll, but we continued across the desert where the road was supposed to be, the route distinguished only by a slight decrease in the amount of creosote.

After passing through a fence, we began crossing swale after swale, each one sharper than the one before. While piling up stones to bridge a particularly deep chasm, it became obvious that we should make some choices about where we got stuck, since that's where we would be spending the night. Fortunately that place turned out to be a level clearing on the edge of a side canyon.

Once the campsite was set up, we discovered that the last swale we crossed was a tributary that provided easy hiking down to the river. It's always a delight to hike a canyon from its origins as a minor drainage, and to watch the walls rise up and the layers of rock emerge. This side canyon began as crunchy granola conglomerate that, once we entered the main drainage, gave way to a band of shocking mint green. And below that, there was layer of smooth bone-white rock carved into a maze of slots and whorls.

In the morning we set off cross-country, aiming to intersect the main canyon a bit farther downstream. But we were frequently distracted by the astonishing variety of rocks beneath our feet — lots of basalt and quartz of course, but also buttery bubbly brain-like clumps of chalcedony, and chunks of agate in colors ranging from chocolate brown to bottle green. Why is it that the bleakest, most featureless deserts are so often decorated with the most colorful stones and wildflowers?

We dropped into the canyon near where a spring watered a nice collection of cottonwoods and willows. By now, we were sandwiched between sandstone cliffs about 200 feet high, and the way forward required clambering up the side of a slot canyon around a deep green pool. Our friends made it through, but Dennis and I scrambled to the top of the mesa in search of an alternative route. We were well a quarter mile past the confluence before we finally found a side canyon that eased down to the Gila via a series of rock slides and dry waterfalls. But when we reached the shore, we found it choked with debris from the big flood of September, 2013. Deadfall mixed with catclaw and saplings was piled over our heads in every direction, and rained clouds of caked mud as we hacked our way down to the river. Meanwhile our friends had reached the mouth of the canyon and were reporting lots of petroglyphs on the opposite bank, so we rolled up our pants and waded across a shallow section of stream water a few clicks short of freezing.

On the opposite shore, we found another miserable tangle of brush. We continued hacking our way toward the cliffs, busting branches, pushing logs aside and even crawling on all fours to avoid the worst of the catclaw. Ravens circled overhead, seemingly bemused by our labored progress, and probably wondering why we didn't "grow a pair" (of wings) and see things from their point of view.

Jaguar Petroglyph Panorama. Note the above image is scrollable.

It was mid-afternoon and we had almost given up hope when we suddenly began seeing petroglyphs etched into the cliffs above us. So we hauled ourselves up to a narrow ledge at the base of the cliffs and began inching our way around them, and a few minutes later we met our buddies making their way upstream. Together we worked our way around the cliffs, encountering panel after panel of the most incredible petroglyphs. Some featured geometric patterns like the glyphs at the summit, but they appeared alongside possibly more recent glyphs depicting many more human and animal figures. The most dramatic panel featured an apparent encounter between a jaguar and a dog against a backdrop of ragged mesas.

Our fatigue now totally evaporated, we took pictures to our hearts' content, ate a long overdue lunch, and slogged back across the Gila with the sun already disappearing behind the canyon walls.

It was another frosty night under the stars, extended a few hours thanks to a fragrant fire of hearty Ponderosa pine. In the morning we peeled the winter bag away from the frozen wall, and it was off to our next destination, the old Carlisle Mine, where it's rumored that rockhounds like us might find jasper, chert, agate, amethyst and pyrite. The temptation is too great to resist, given that our respective hobbies of jewelry-making and electronics tinkering are somehow converging in a desire to cut and polish the stones we collect while hiking. 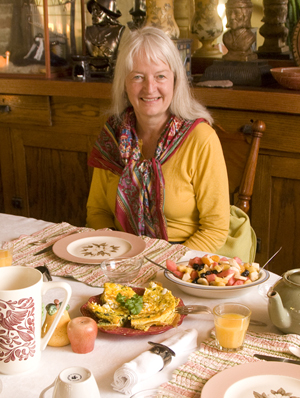 Breakfast at the Simpson Hotel

We poked around some of the prospecting sites and enjoyed the dramatic scenery without finding any really interesting deposits. As we wandered back down the mountain, it occurred to us that we would be passing through Duncan, home of the Simpson Hotel, and it turned out they had a free room that night. So we bid farewell to our buddies from Silver City and prepared for a night of luxury in their "Sweetheart Suite". And, my friends, as much as I love camping in the desert, a hot soak in a clawfoot tub and a night in a warm, dry bed was a most welcome change of pace.

The Simpson is a 1914 architectural gem owned and managed by Deborah Mendelsohn, who has spent the last seven years restoring it with grace and loving attention to detail. No mere monument to Victoriana, the Simpson has many worthy updates, including a serious water harvesting operation, a native plant garden and a backyard menagerie that includes a pet goat, half a dozen semi-feral cats and four orphaned roosters.

Monday morning it was another romp through the catclaw and the prickly pear in search of geodes along Pipeline Road. We found a few small nodules, but nothing to warrant the write-up in "Gem Trails of Arizona".

That afternoon, there was one more backroad to explore, winding through high open ranch land to the upper end of Eagle Creek. Then, sadly, it was time to pack up and head home. But we are coming home with a whole new list of backroads to explore, and confirmation that the roads less traveled are always the most interesting.