If we move to Silver City, you can put up whatever ham radio tower you like.

That was the deal. Shortly after relocating to Silver City, in the Spring of 2021, Dennis placed an order for a 60-foot telescoping tilt-over tower from Tashjian Towers, but supply line issues delayed delivery for nearly a year. 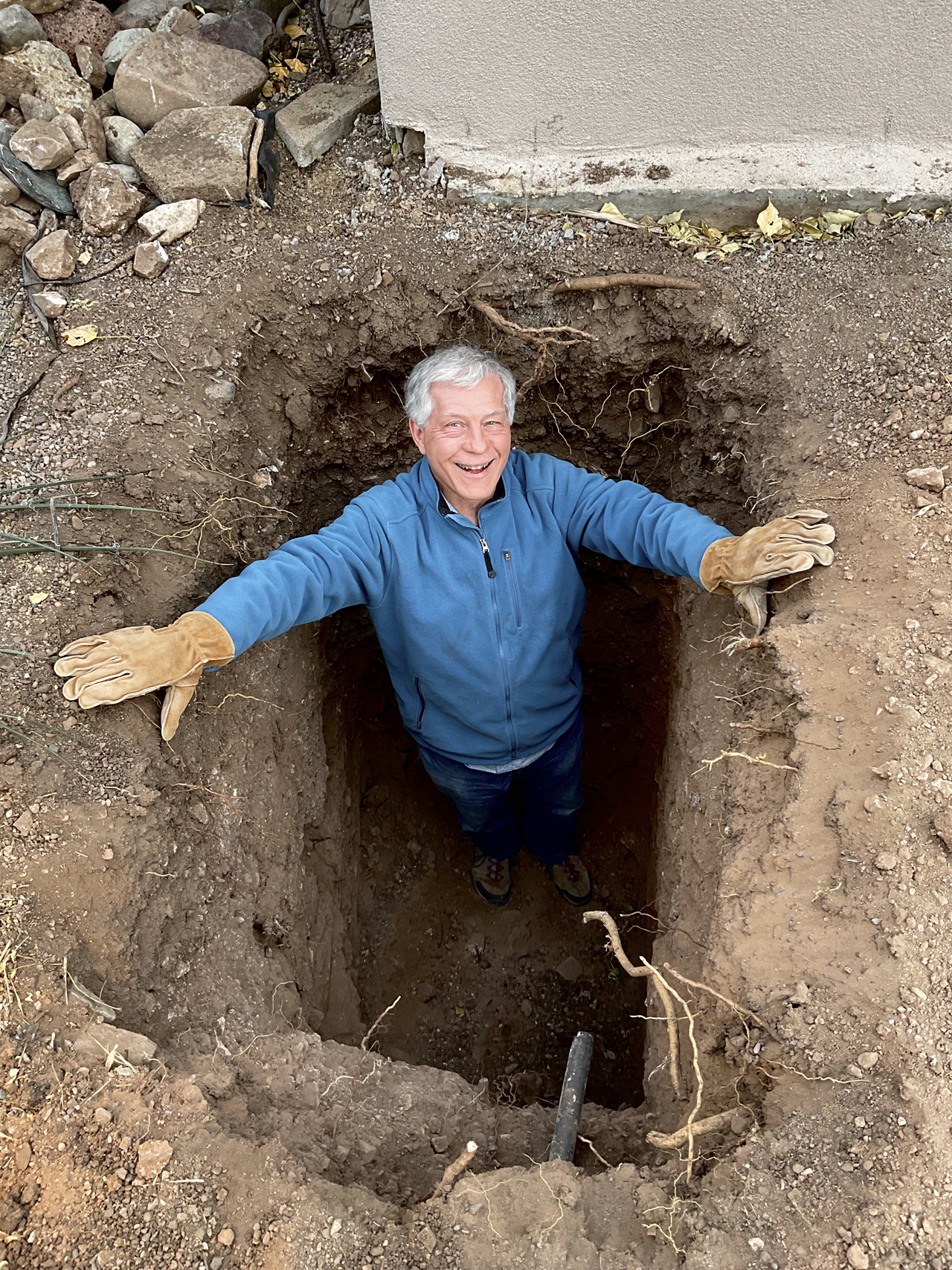 Meanwhile, we prepared the yard as best we could, including digging a hole 3' x 3' by 6-foot deep for the tower base. 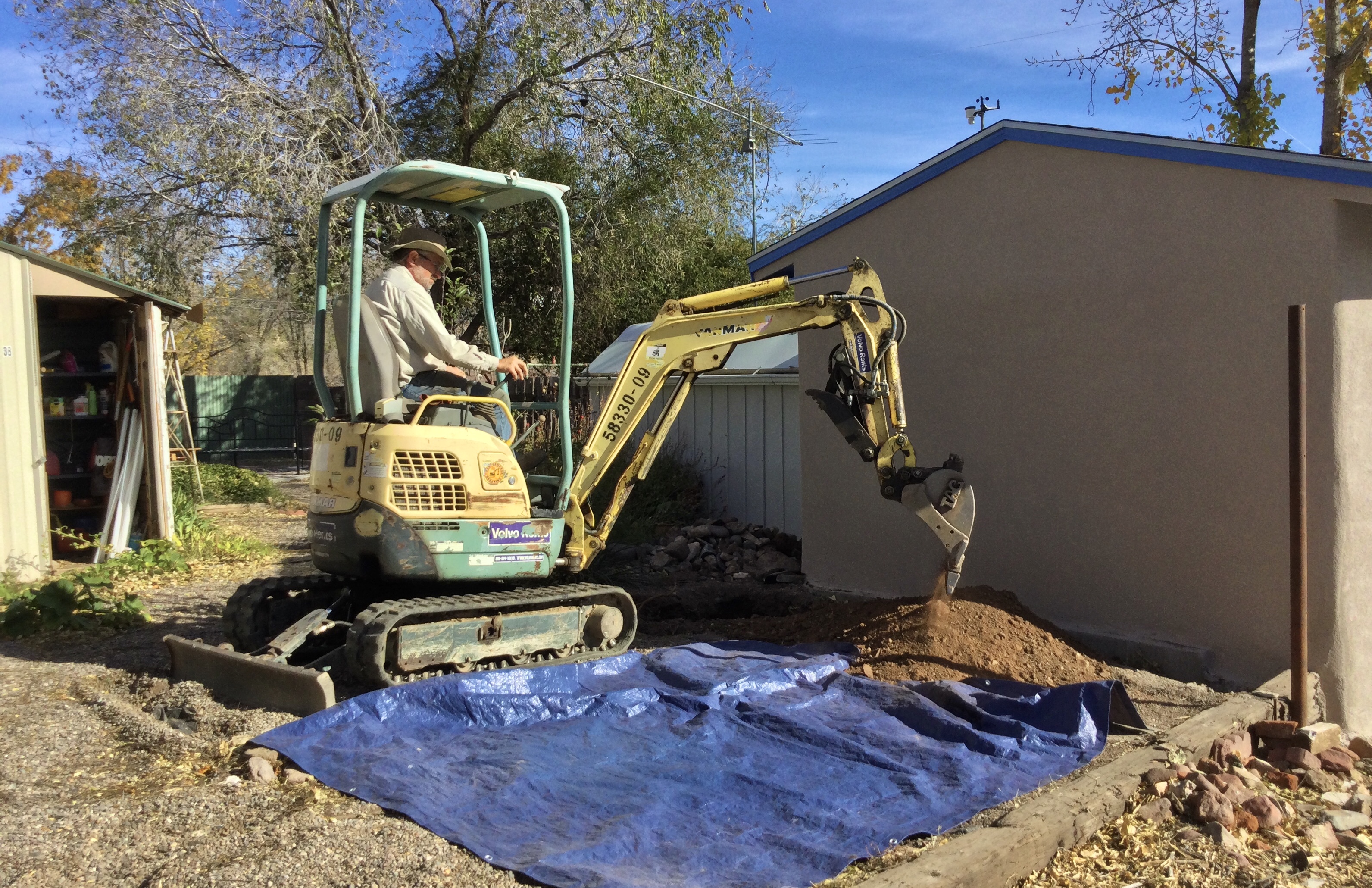 We dug as deep as we could by hand, but ultimately had to hire a mini-excavator to finish the job. 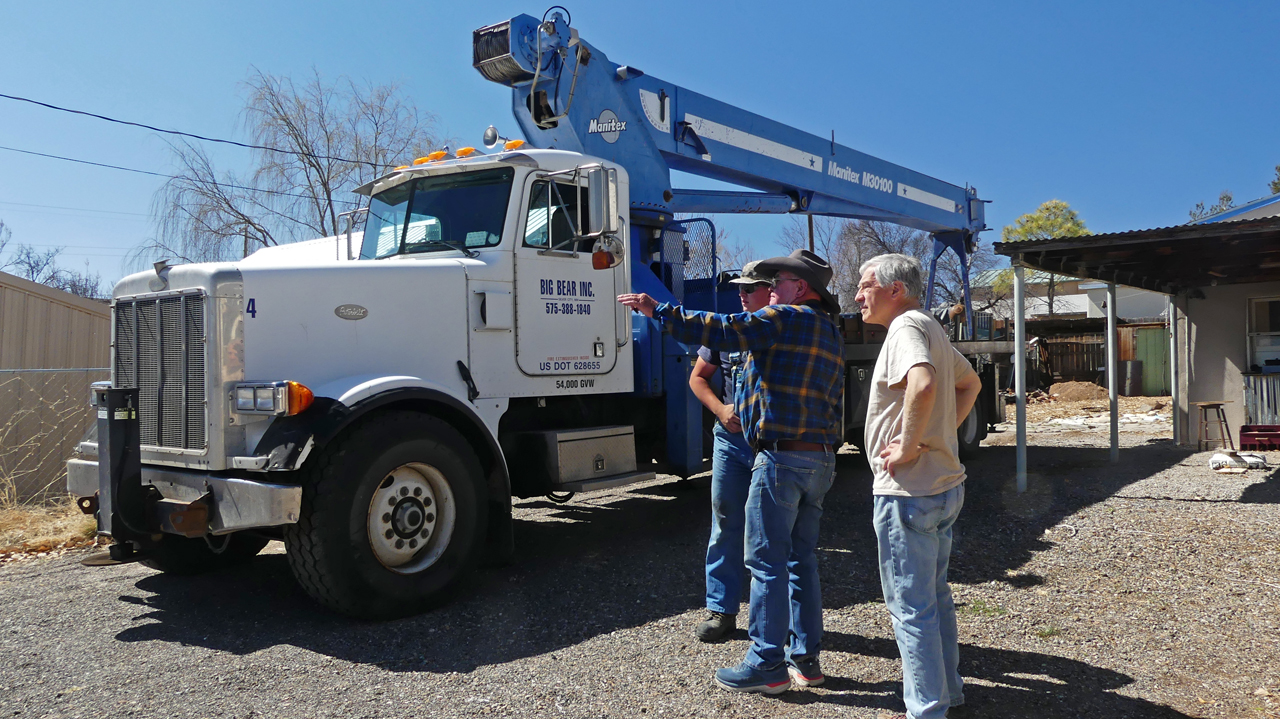 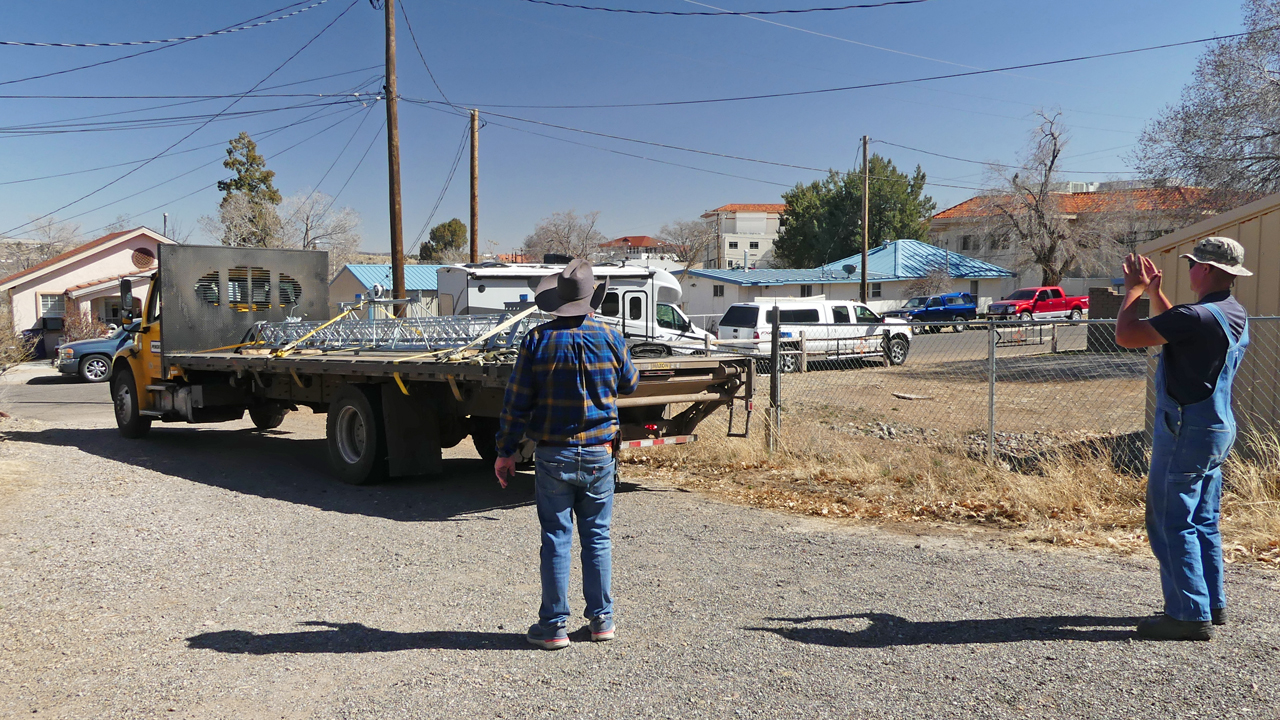 The biggest challenge was coordinating delivery of the tower with availability of a crane to unload the truck, since the tower components weighed more than 600 pounds. 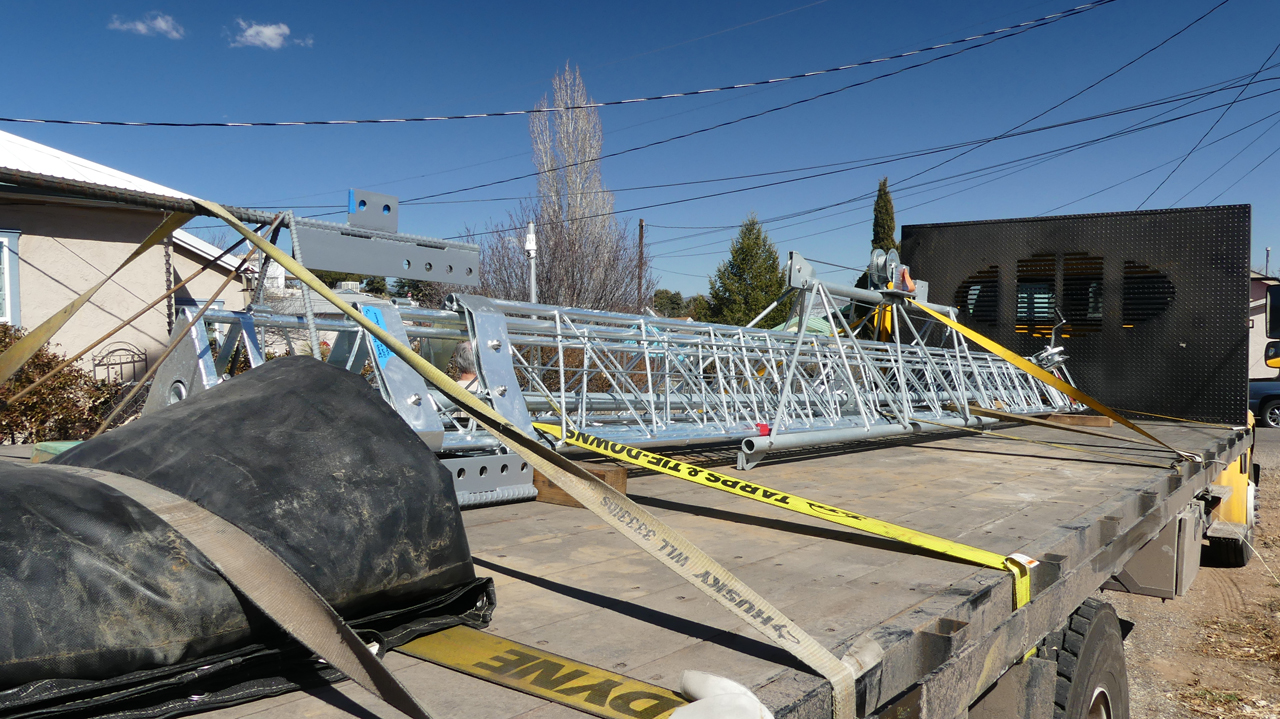 The truck was nearly two hours late, but the driver and the crew from Big Bear Crane made quick work of it once the truck arrived. 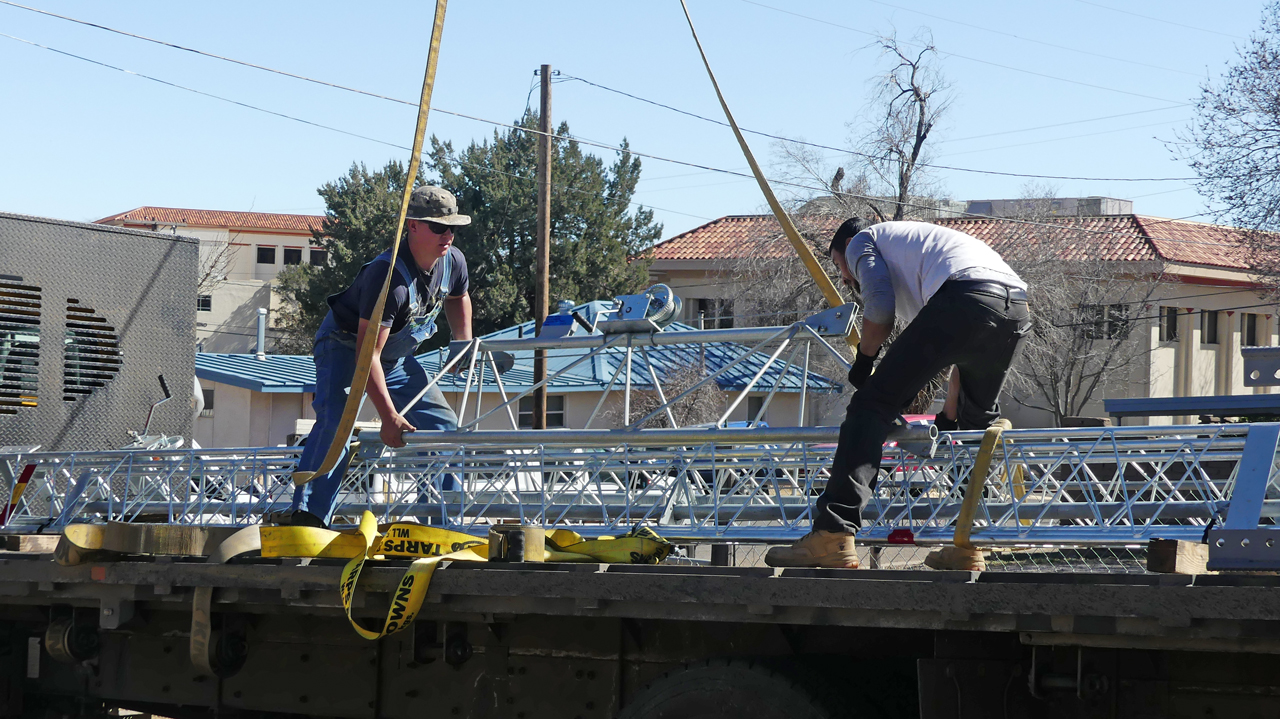 Attaching a sling to the tower.

And then up, up and away it went, over the fence and behind the shop! Definitely the best show in town! 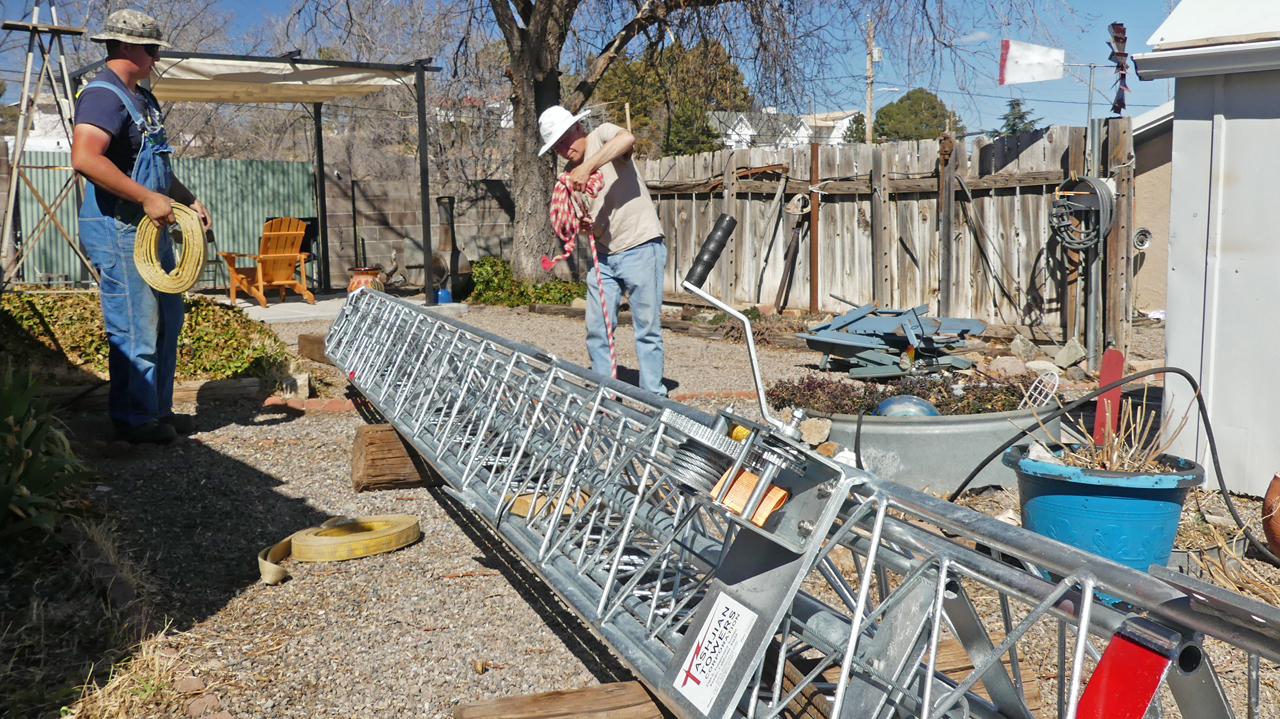 They set it down perfectly on some old telephone poles that we hope we can use to roll the tower into position. But there's lots more prep work ahead of us before that can happen. 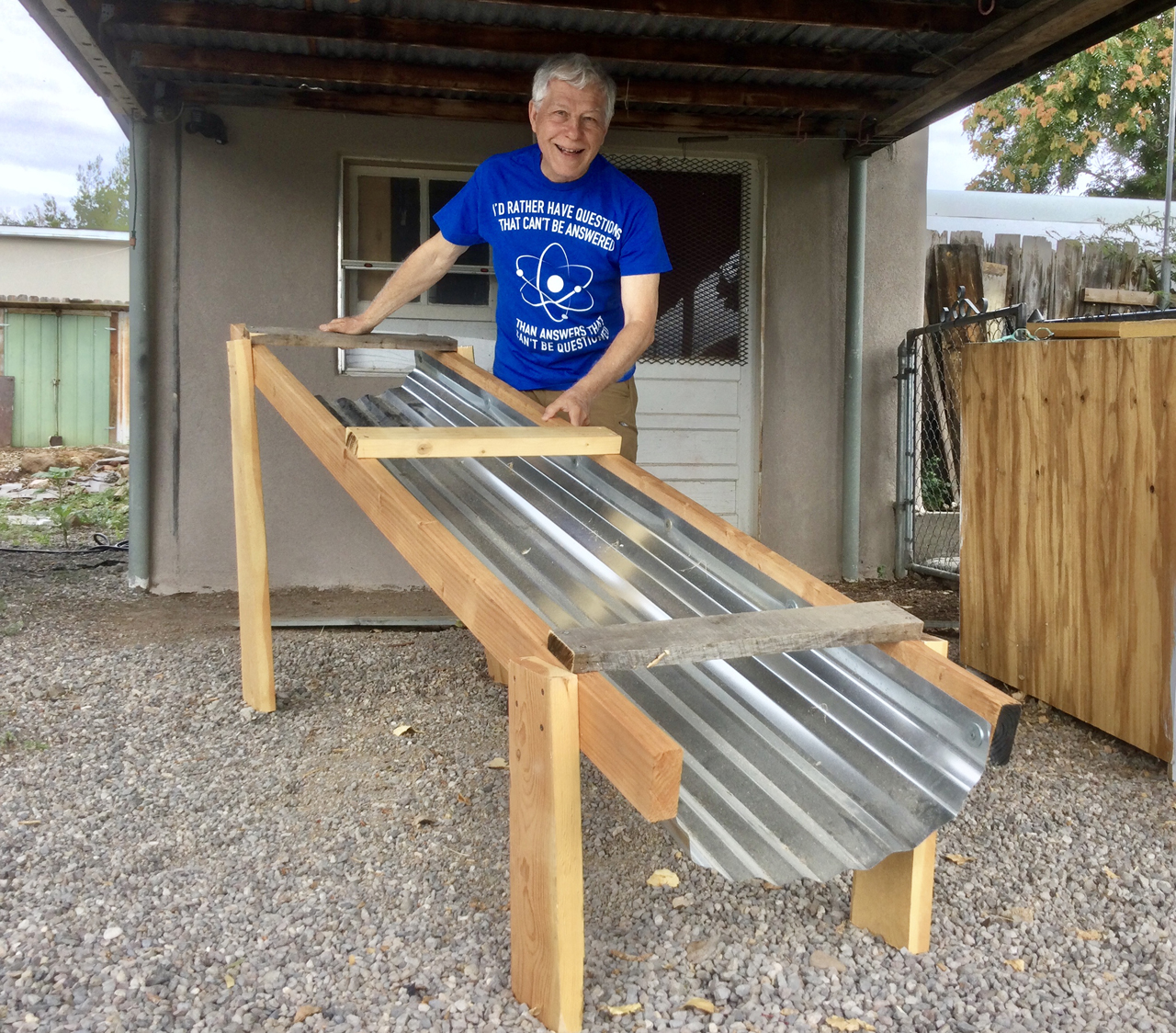 Dennis plighting his trough and getting ready to cement our relationship. 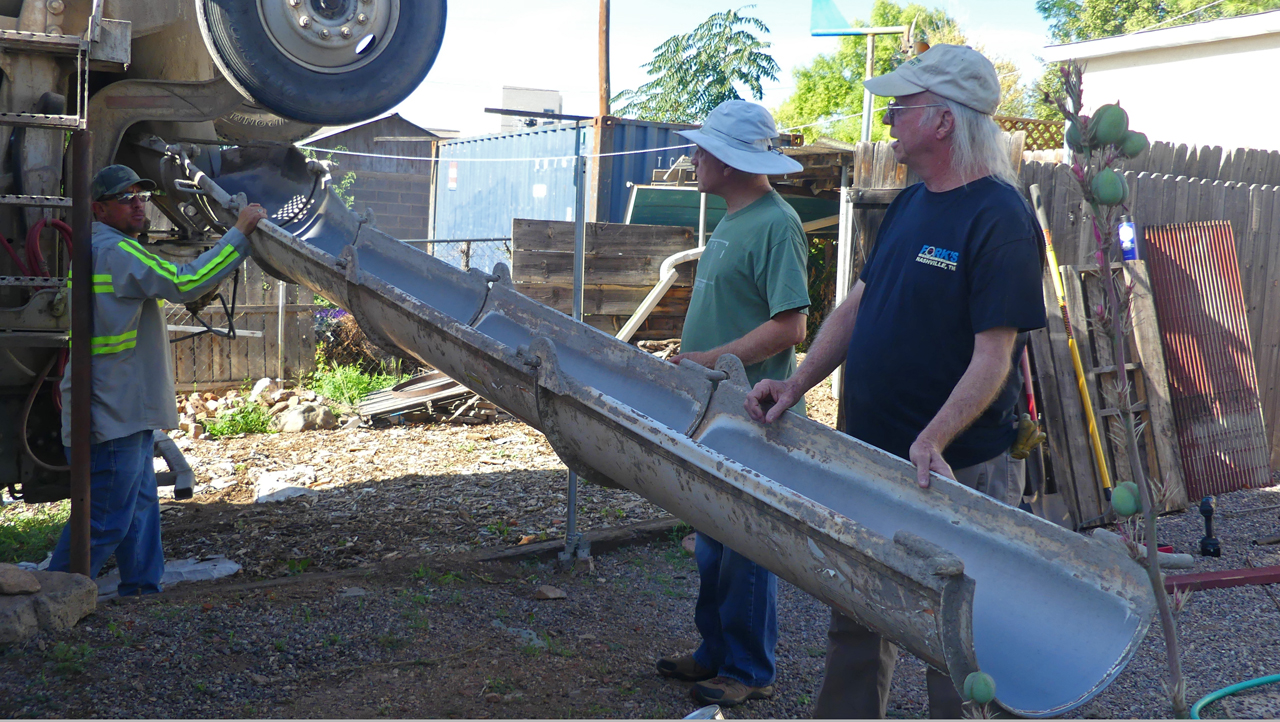 We are profoundly grateful to Bill, Kim, J, Val and Jeff for showing up and pitching in to help. We had no idea how badly we needed you! Once the concrete began to flow, it was all hands on deck, to smooth it out and keep the tower base in place before it began to set. 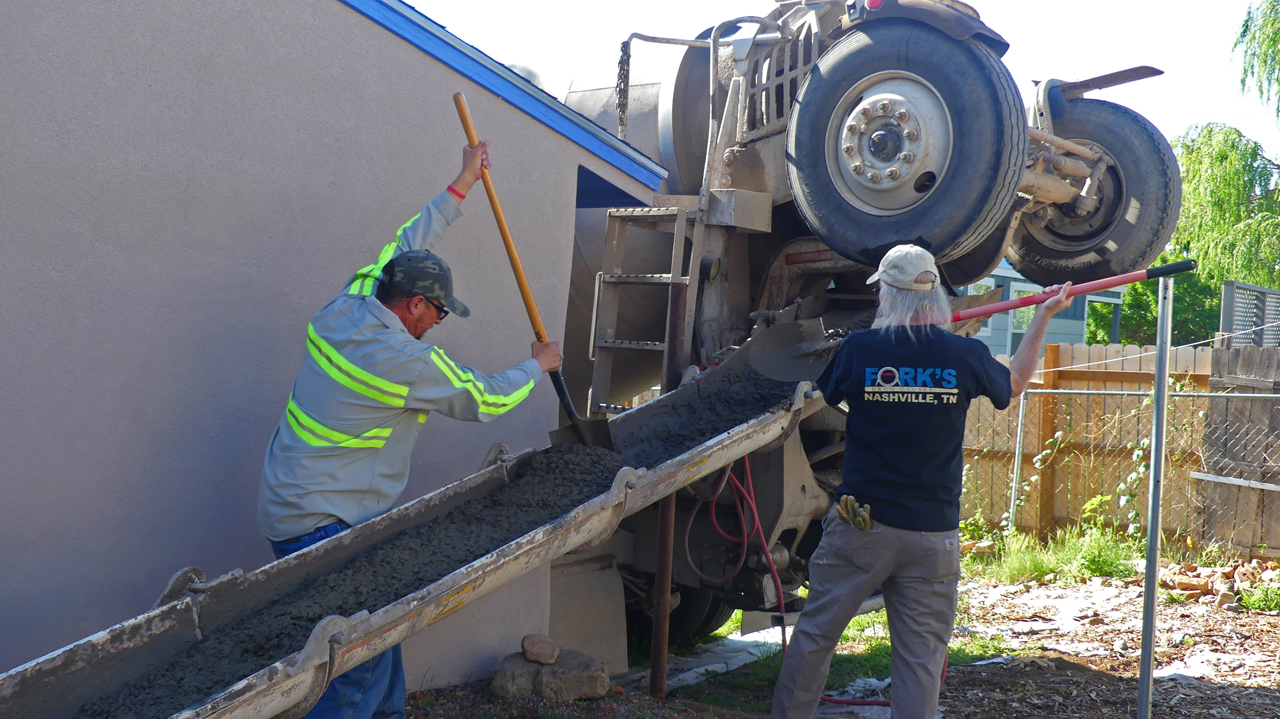 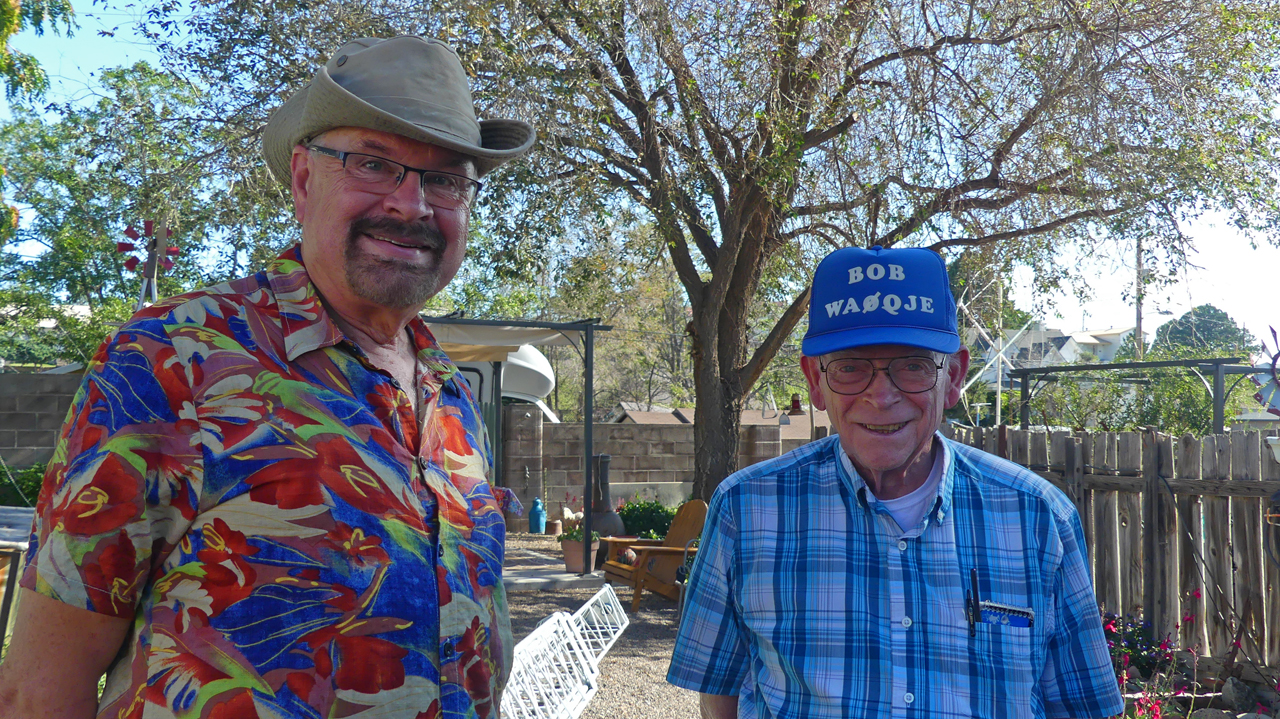 Meeting Silver City ham radio buddies Jeff and Bob in person for the first time. Bob has already talked us to and from many an adventure in the Gila Wilderness. 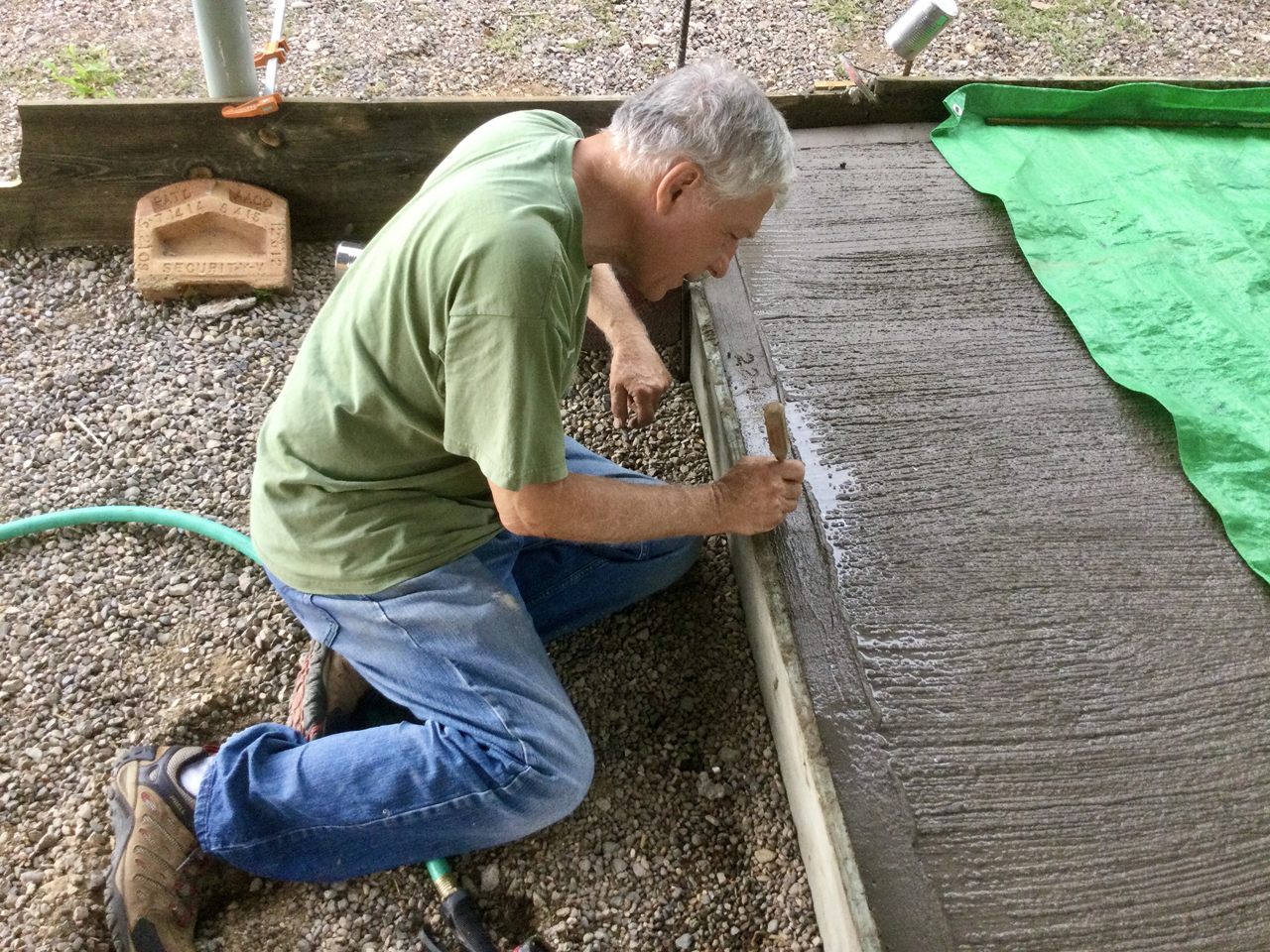 We tried to persuade Elio to leave his pawprints in the fresh concrete, but he wasn't having it. 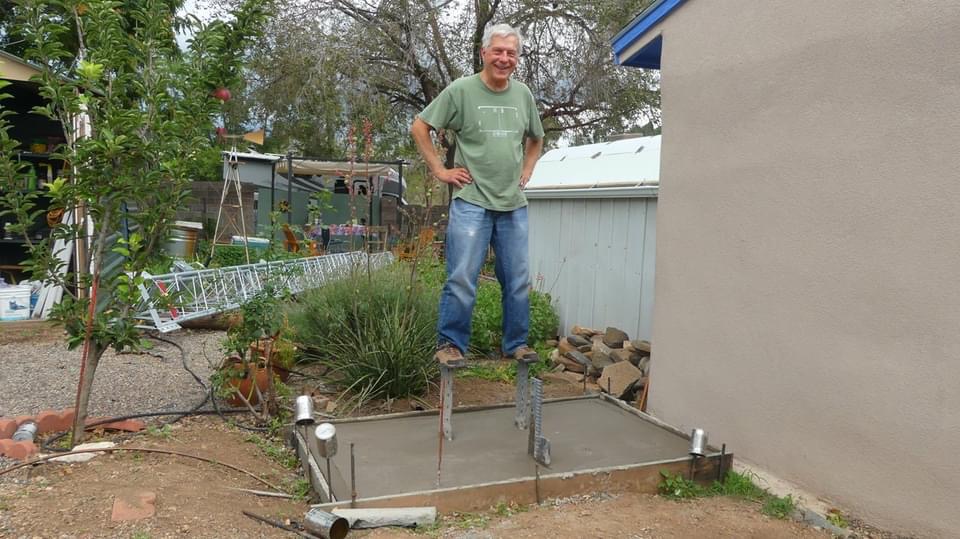 All done. Not 100% vertical, but Dennis is happy. Of course this is only the beginning. The concrete must cure for a month before Dennis can begin installing the telescoping tower and antennas. 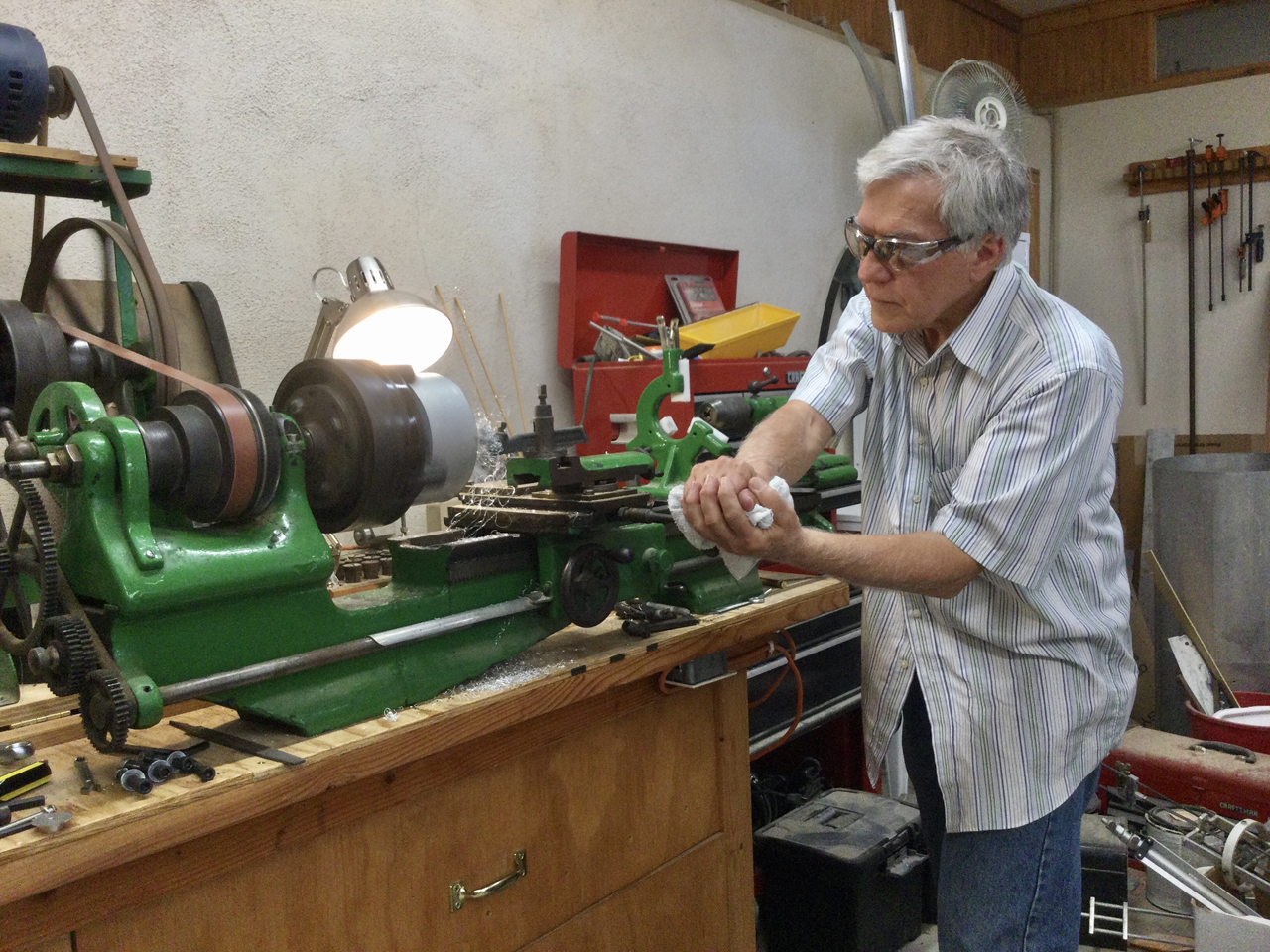 The last (best) part of our trip to Chama was visiting Tom and Ann in Edgewood. The antique lathe in Tom's shop was perfect for machining an aluminum spacing disk that will be an essential part of the tower. 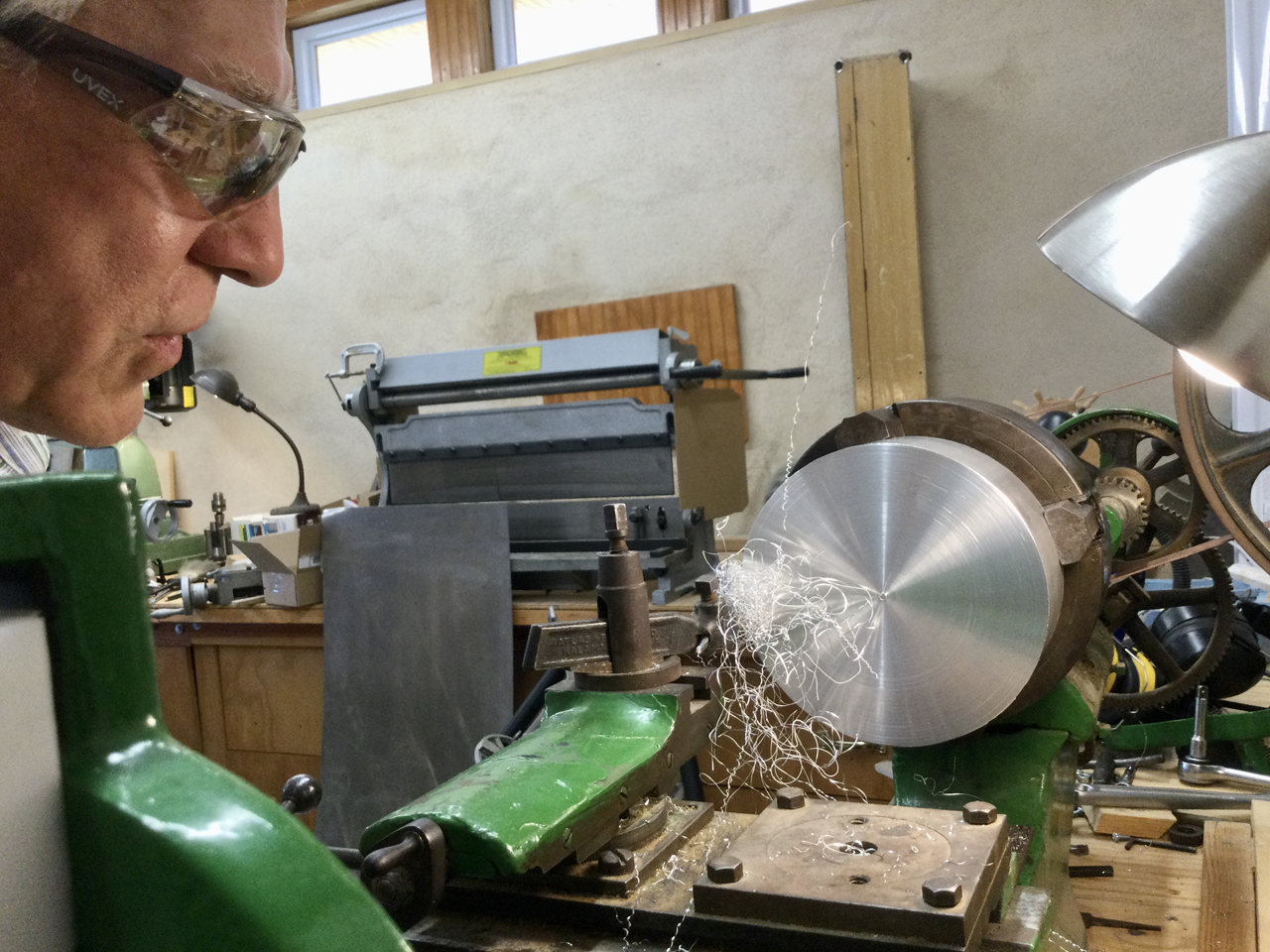 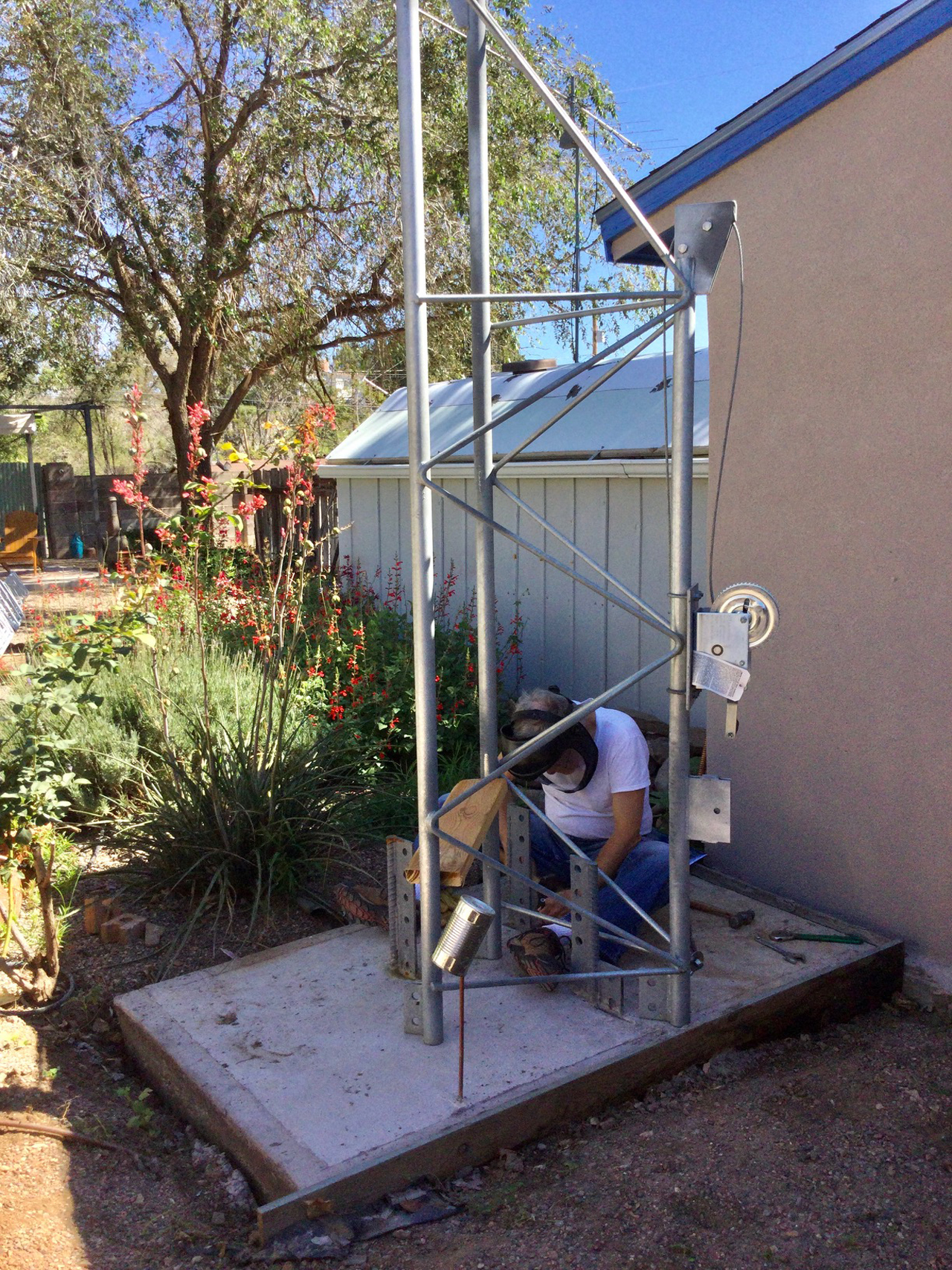 Now the concrete is cured and the spacer is machined and drilled, so we're ready to attach the base. But the concrete is a bit too high, and the base dimensions are off by a half inch, so he's having to chisel away some concrete and then stretch it to fit.

After several weeks of trying the level the tower base by chipping away excess concrete and enlarging some bolt holes, we were ready to try positioning the tower. But by then we had Covid, so we couldn't ask anyone for help. We were on our own to try to erect a 300-pound tower, with nothing but our wits and the most primitive tools. 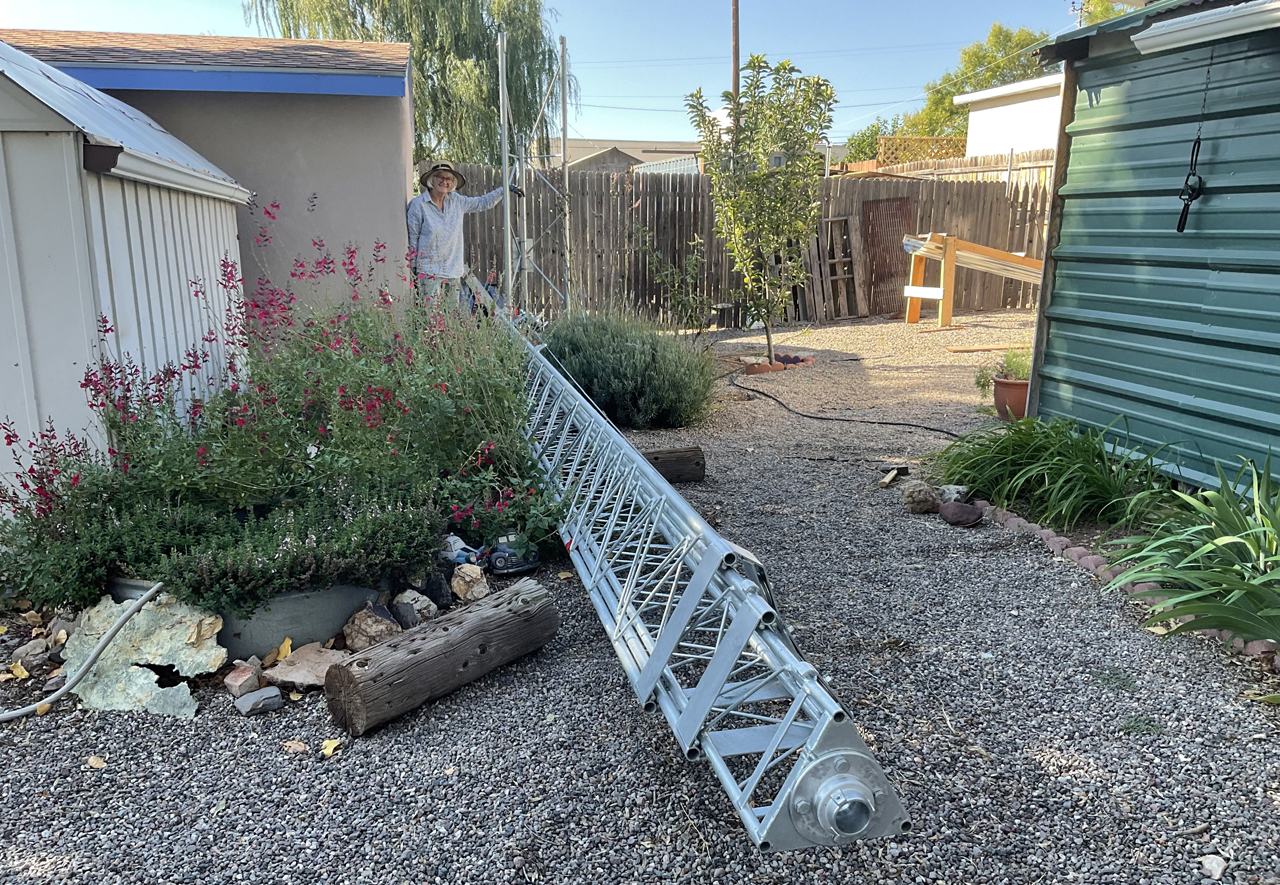 They say the ancient pyramids were built with inclined planes and levers.

So we inched the tower forward by rolling it on sawed-off telephone poles. Then we used big wooden levers to flip it over, taking care to protect the winch drum. 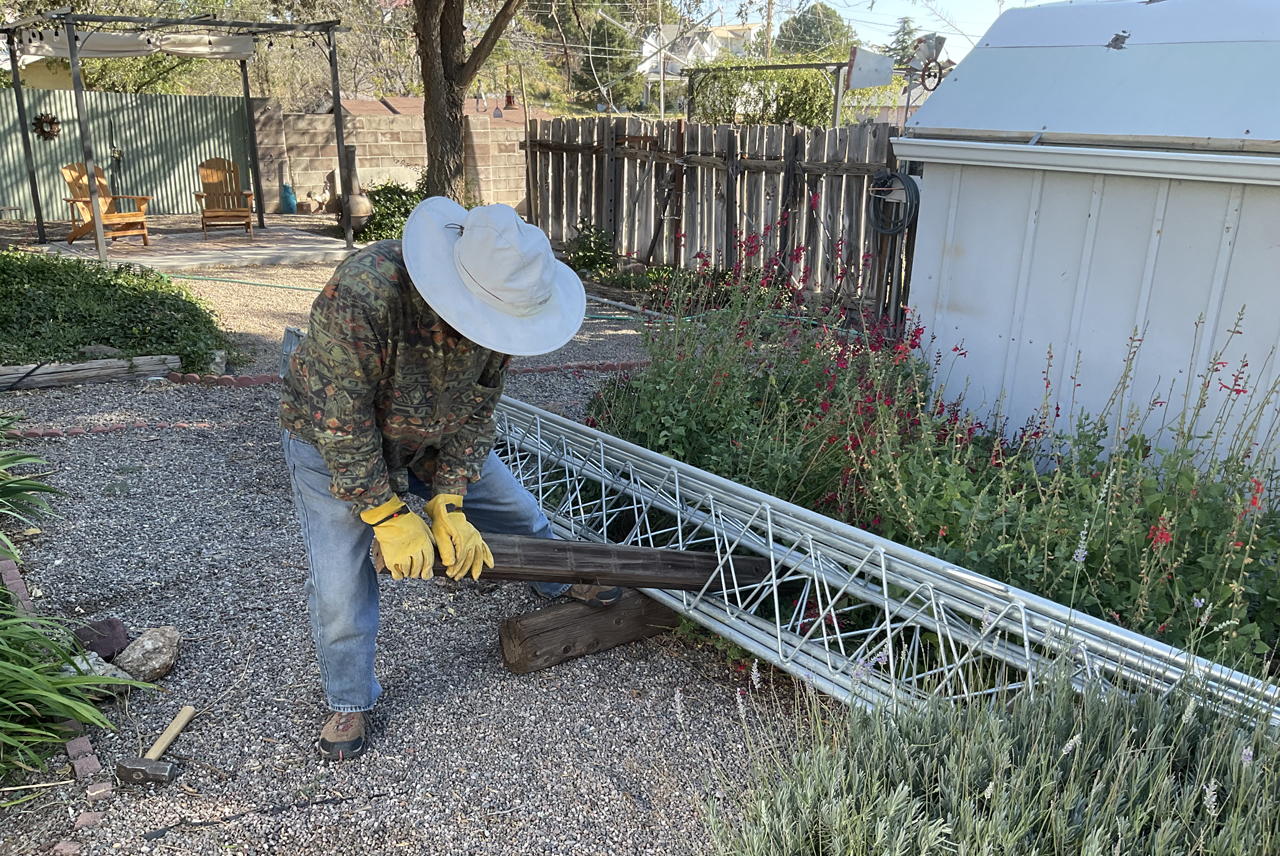 Then, we finessed the tower into place using cement blocks, boards and the heavy-duty jack from old Dodge van.

The hardest part was aligning the bolts at the bottom of the tower. But once he did that, Dennis used one of the built-in winches to erect the tower, attach the upper bolts, and then raise it to its full magnificence.