In mid-February, Nick and Ruth and Hobbs and Jack and David and I set out from Phoenix to visit the Cabeza Prieta National Wildlife Refuge. We left Route 8 in Tacna and headed south along a red dirt road that crosses an endless creosote flat.

All these places are creosote, bare ground, dry washes, stunted trees. This earth is too dry for the deer, too dry for the javelina. This is the furnace room of the Sonoran Desert."
Charles Bowden, "Blue Desert" 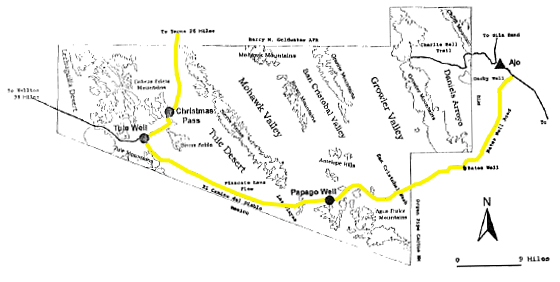 After a sweet night under the stars, we decide to investigate the dunes to the east at the foot of the Mohawk Mountains. Not surprisingly, they were much taller than they looked from a distance. 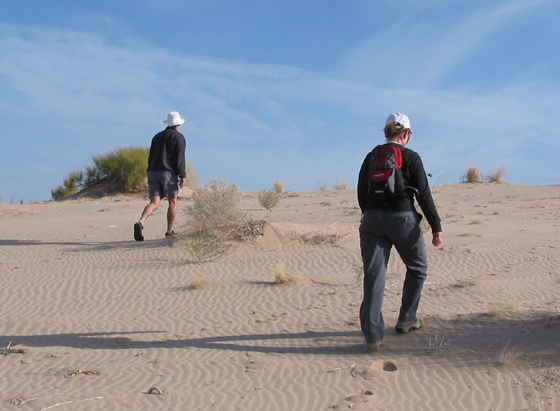 Ruth, David, Hobbs and Jack take a break to enjoy the view. 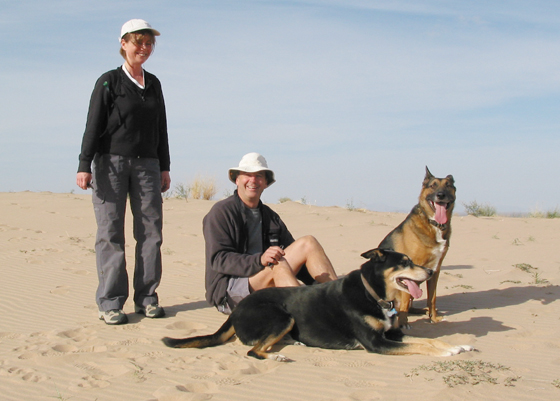 At the very top of the highest dune was a single desert primrose. 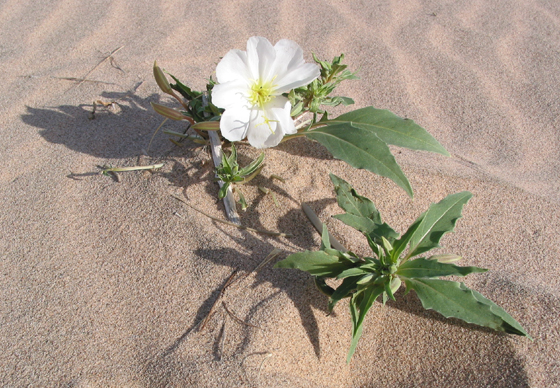 We continued south past the Sierra Pinta to Christmas Pass, where we scrambled up cliffs of friable gray granite shot with veins of quartz. 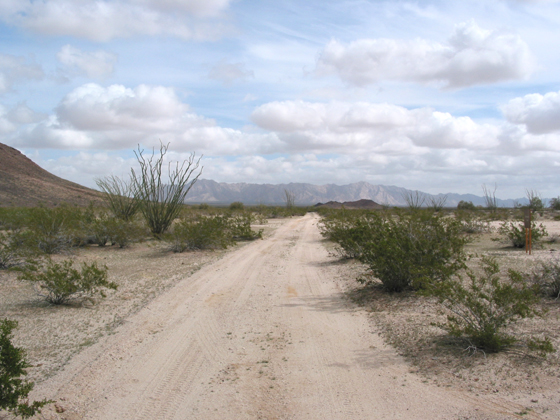 This is one of the few approved campsites in the refuge, and it's a good one. 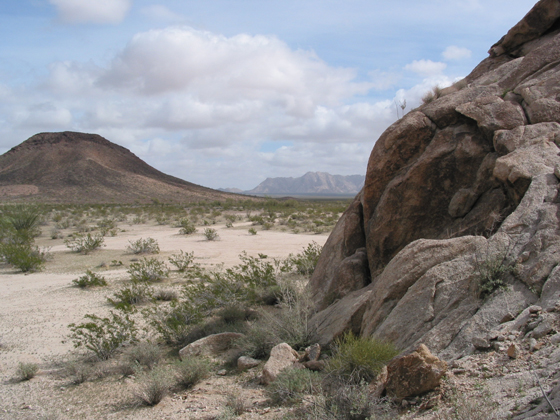 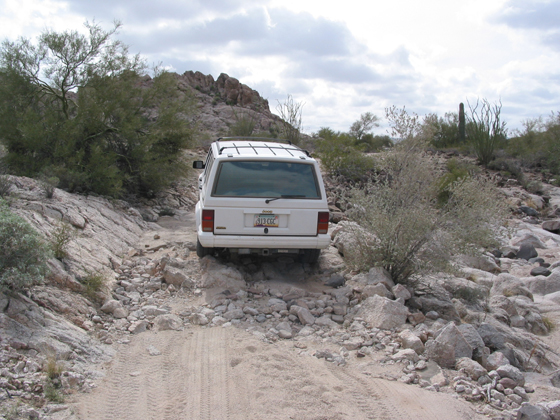 A few miles south of Christmas Pass, we arrived at Tule Well, an old ranch site where a handsome windmill still pumps water for a large storage tank.

There are no springs or streams and no one lives here, no one. A few rock holes hold puddles for desert bighorns for weeks or months at a time and the rains average three inches a year and sometimes forget to come for years at a time... This is the basic desert of folklore, one uncluttered with annoying twentieth-century rest areas, water fountains, trail signs, and short-cuts.Charles Bowden, "Blue Desert" 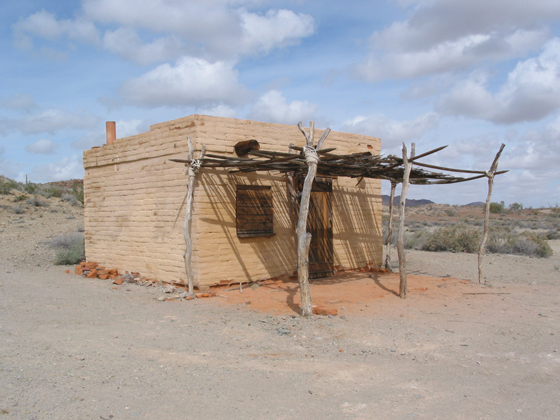 Here we joined the infamous Camino del Diablo, where so many early explorers and fortune-seekers lost their lives. The Devil's Highway is the only route around the fierce Gran Desierto that stretches over 100 miles from the Pinacate Volcano Field to the Sea of Cortez. 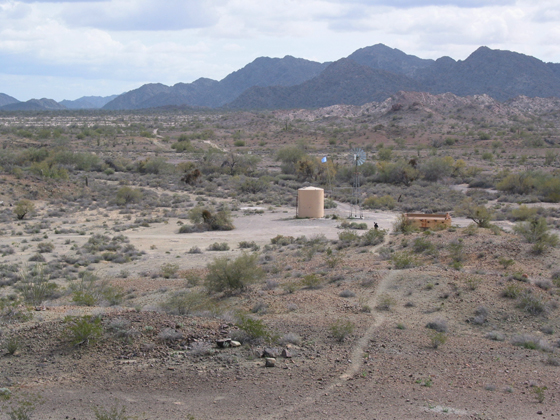 Our route took us just north of the Pinacate lava flow, and the flour-fine sand of the Pinta Playa made for extremely difficult driving. 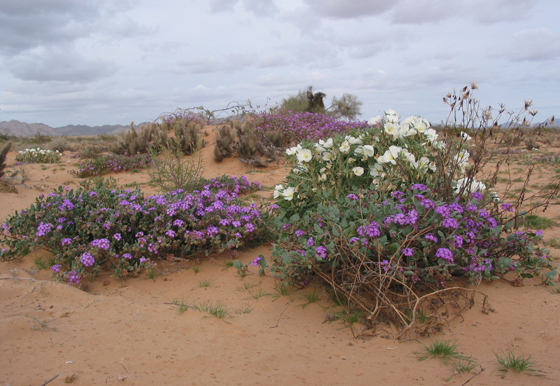 In the middle of this harsh environment, we suddenly came upon a field of wildflowers – a lush garden of verbena, desert primrose and desert sunflowers. 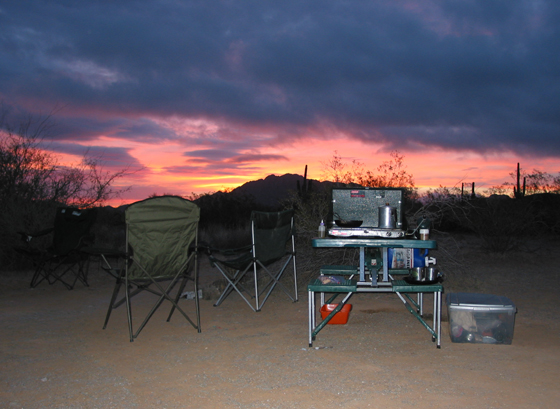 We camped that night near Papago Well, huddling around a fragrant mesquite fire while the wind howled across the Agua Dulce Mountains. 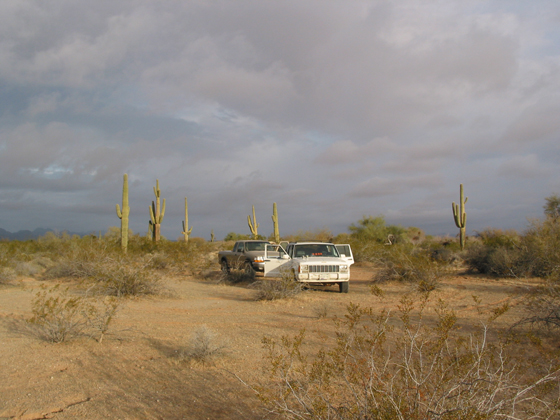 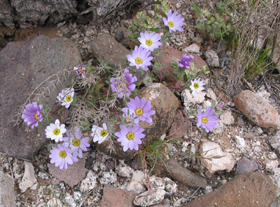 The unusually overcast sky made for a very spectacular sunrise.

The hike up Kino Mountain will have to wait for better conditions, but we were thrilled by the tiny flowers we found in Growler Pass.

We saw a grand total of four other cars (one of which was the border patrol) in two days.

Most of the Southwest is beyond my belief and strikes me as an outpost of American civilization with the exiled desert merely a faint, scenic mural stretching behind the powerlines and skyscrapers. But the Lechugilla, the Tule, the Mohawk dunes, these places have a weight with me that makes the cities of my people seem light and insubstantial... When I touch the steel towers of the Sunbelt, they feel like cobwebs soon to be dispersed by an angry wind. When I touch the earth I feel the rock hard face of eternity. Charles Bowden, "Blue Desert"