Summer Solstice and the North Rim

Each year at Summer Solstice, ancestral spirits, or "kachinas" come down from their cloud homes in the San Francisco Peaks to live among the people and restore rain and fertility to the desert.

It has become an annual tradition for us to travel north to Hopi Land to witness the Summer Solstice dances, and restore our spirits with the beauty of northern Arizona and the companionship of good friends old and new.

We gathered once again at La Posada in Winslow, an eclectic refurb of a historic Fred Harvey hotel that has apparently become the place to stay for European visitors to the Southwest. After a few blissful hours wandering around the hotel and photographing the freight trains that thunder through town more than 100 times a day, we met up with Jackie and Lionel for an exquisite dinner in the Turquoise Room.

After a week of +100° temperatures in Tucson, the cool northern air was intoxicating, and by 5:30 am I was up and wandering the sleepy streets of Winslow, hoping the coffee shop would open on time (it never does). Kit and Ann rolled into town in time for breakfast Saturday morning, after a delay of several hours to repair a fuel pump destroyed by a packrat with a taste for automotive wiring.

Each time I witness the Hopi dances, I am awed that such ancient traditions are still honored, and that these ceremonies are open to the public. We witnessed the Comanche dances at Shungopavi on First Mesa, Tasaf at Hotevilla on Saturday, and Chakwaina dances at Moenkopi. The dazzling colors of the kachina costumes and the fresh fruits and vegetables overflowing the plaza are a feast for the senses, but no filming is allowed on the Hopi Reservation. The clowns at Shungopavi coaxed Kit to join them for lunch, but he escaped with his beard intact while the clowns amused themselves with some unsuspecting German tourists.

We camped at Coal Mine Mesa, one of the most eerily beautiful canyons in all of Arizona. In addition to the colorful layer-cake canyon, the mesa top is also remarkable for its mix of fossilized shells and blades of transparent gypsum. We circled the wagons for protection from the wind, and enjoyed a late-night potluck serenaded by Kit.

Panorama of Coal Mine Mesa

Sunday morning we wandered slowly west, stopping in "Tubacity", eating lunch in a sandstorm, and warily skirting the Shultz fire burning out of control in the San Francisco Peaks. No wonder the kachinas are coming down from their cloud homes!

The heat, the wind and a cloud of gnats that left my head and shoulders covered with grape-sized welts indicated a stop at Lee's Ferry Lodge in Vermillion Cliffs, where Dennis and I spent a memorable Christmas Eve in 2005. Shade and a couple of cold beers gave me a few hours of welcome relief from the gnatty dread. 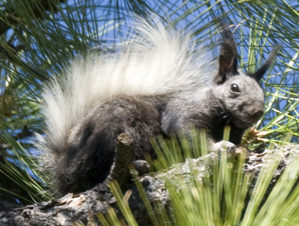 Despite 10 years in Arizona, this was my very first trip to the North Rim of the Grand Canyon, and I was very surprised that the approach began by crossing the vast green-but-dry House Rock Valley and then scrambling +2000 feet to the top of the Kaibab Plateau. Past Jacob Lake, broad green alpine valleys unrolled before us. Just north of the Park, we followed a side road to a primo camping spot under the pines on a ridge overlooking Dog Canyon. At 8500 feet, the evening was deliciously chilly, and we wrapped in blankets after feasting on grape leaves, hummus, baba ghanouj and Turkish coffee!

We reluctantly bid farewell to our camp mates in the morning, and repacked our bags for an overnight hike. At the park entrance, Dennis flashed his freshly-minted "Golden Geezer" pass, a gift for his 62nd birthday. We plan on wearing it out!

Our destination was the Widforss Trail, which the latest issue of Arizona Highways designated as "the best hike in Arizona". The 10-mile round trip takes off just north of Grand Canyon Lodge and wraps around The Transept, a steep-walled side canyon that is nearly as deep as the Grand Canyon itself. Accustomed to the access limitations of the South Rim, I was astonished to find a trail that hugs the Rim for most of its length, and offers unlimited opportunities for camping with a few feet of the Big Ditch. But not one of the other 40+ hikers we met on the trail was toting a backpack!

It was easy hiking with little elevation gain, so after lunch at Widforss Point, we backtracked to a primo camping spot with killer views of the Transept, where we inaugurated our brand new super lightweight Rainshadow 2 tarptent. So many "firsts" on this trip!

We were back at the trailhead by 9:30 Tuesday morning, leaving plenty of time for a hot shower (pure bliss!) and even a brief rendezvous with Kit and Ann at Late for the Train to break up the long drive back to Tucson.

Now back home at the Brick Tent, we watch the sky for signs that the dances were successful, and that rain and life will soon return to the desert.