We keep looking for ways to experience the Grand Canyon without extreme elevation gain/ loss. On a tour of the Grand Canyon earlier this year, we picked up a pamphlet about the North Bass Trail, which described a comparatively easy hike to Powell Plateau, an eight-mile-square forested island off the North Rim of the Grand Canyon. Best of all, the trail appeared to have a reliable water source at Muav Saddle, about 1-1/2 miles from the trailhead. We determined to backpack to Powell Plateau after the monsoon, while the weather was still warm and the water plentiful, and derived a complex plan to minimize our pack weight by spending one night on the plateau and resupplying at Muav Spring going and coming.

With a group of five, we made the long, long drive to the North Rim from Tucson on a Thursday afternoon in late August. Despite the distance, the final few hours passed quickly, as we wound our way alongside a spectacular flame-red ridge that funnels travelers to a bridge over the Colorado River at Lee's Ferry, and the swings south and climbs steeply into the lush alpine meadows of the Kaibab Plateau.

We had arranged to rendezvous at the Kaibab Lodge, where we lingered over dinner in an airy wood-paneled dining room that harkened back to an earlier era in northern Arizona travel.

By then the sun was setting and the air was already deliciously cool. We began threading our way along a web of gravel roads that became progressively rougher and narrower as we approached the trailhead at Swamp Point. Along the way we passed several deer and at least one elk. Well after dark, when we hadn't seen another vehicle in hours, we suddenly drove into a cloud of dust. And then the headlines picked up the round-backed silhouettes of several ... buffalo? At first we couldn't believe our eyes, but vaguely recalled reports of a herd of buffalo on the North Rim.

At last we emerged from the dense forest onto an open promontory where we could just discern the outline of Powell Plateau, and beyond that, a handful of twinkly lights on the South Rim.

I could hardly wait for the morning light, and the stupefying views down White Creek and out to the main canyon. With an early start we set off down a series of switchbacks toward Muav Saddle, with dramatic views unfolding in all directions. I was particularly taken with a wide glowing red basin to the north that might be Tapeats Amphitheater.

At the saddle, we took a slight detour to visit a charming Forest Service cabin known as "Teddy's Cabin", so named in the mistaken belief that former President Theodore Roosevelt stayed here while hunting mountain lions on Powell Plateau.

We hiked all around the cabin, including a quarter mile down North Bass in search of Muav Spring but found no sign of any seeps. We pressed on, now following the middle fork heading for Powell Plateau. Here a recent fire had burned away the taller trees, leaving the track choked with manzanita and catclaw.

It was a relief to finally scramble to the lip of the plateau where once again we enjoyed some shelter from the sharp midday sun. We set up camp at the first flat spot, and after a break and some lunch, we set off to explore the plateau. It is a truly remarkable environment, mostly flat and covered in a ponderosa pine so dense that there is almost no underbrush. There is a faint trail, but we delighted in the luxury of being able to hike almost anywhere, occasionally making our way to the plateau's edge, where there were astonishing views down canyon and across to the South Rim. Where the trail petered out near a small promontory we sat down to drink in the view and some red wine, until lowering light sent us back to camp.

By then we knew we had too little water to spend another day on the plateau, so in the morning we packed up and headed out, hoping to put the big climb behind us while the slope was still on shade.

As a consolation prize, we decided we would see if we could make our way to Point Sublime, an intriguing peninsula across the canyon that caught our attention during the previous evening's sunset session.

It was a long drive on a rough and narrow road, but this part of the canyon was far more lush and less damaged by recent fires.

Finally, we rolled onto a finger of rock no more than 20 feet wide at times but that extends south a quarter-mile into the canyon. On either side, sheer red rock walls fell away 3000 feet. For Grace, one of our fellow backpackers, it was her first full frontal view of the Grand Canyon. What a way to experience it for the first time!

Taking a break from the unfathomable views to go for a short walk alone, I passed by my totem raven on a dead juniper. As I stood transfixed, she launched into a series of clicks followed by five loud throaty caws. Of course I returned with a handful of unsalted peanuts.

The map shows a camping area at Point Sublime, but judging from the number of yahoos we met speeding toward the point on our way out, we did well to make camp just outside the park in an aspen grove. We were surprised to see that the altimeter read nearly 9000 feet, and that night we broke out the warm sleeping bags.

Our small group parted company the next morning. Dennis and I would spend one more day playing tourist at the North Rim Lodge, making the drive to Cape Royal and finally returning to spend the night beneath the rust red cliffs at Lee's Ferry Lodge. But it's the wonders to be seen on back roads of the Kaibab Plateau that will bring us back to this area again next year. 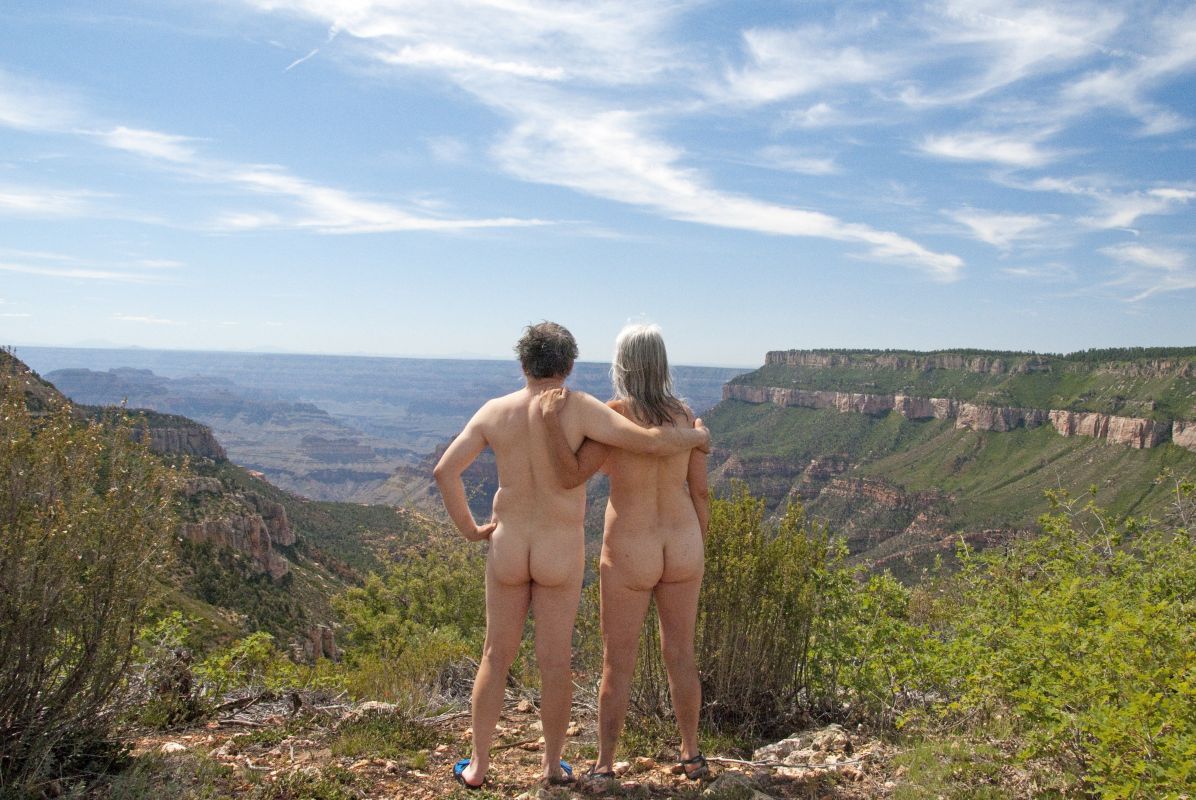