By mid-June, the Bighorn fire had morphed into a monster of over 100,000 acres, and seemed hell-bent on consuming the entire Santa Catalina range. We watched in horror as places where we have camped, hiked and refreshed ourselves in mountain streams turned red on the dreaded daily fire progression map. Meanwhile friends in the foothills endured many a sleepless night, as the fire crawled perilously close to their homes. The day we returned from New Mexico, I began feeling ill — a persistent cough, tightness in the chest, a low-grade fever, enormous fatigue. I got the very uncomfortable COVID-19 test, just to be sure. When it came back negative, we concluded that we should go ahead with our plans to head up to the Mogollon Rim for Ham Radio Field Day, if for no other reason than to get me out of the smoke. 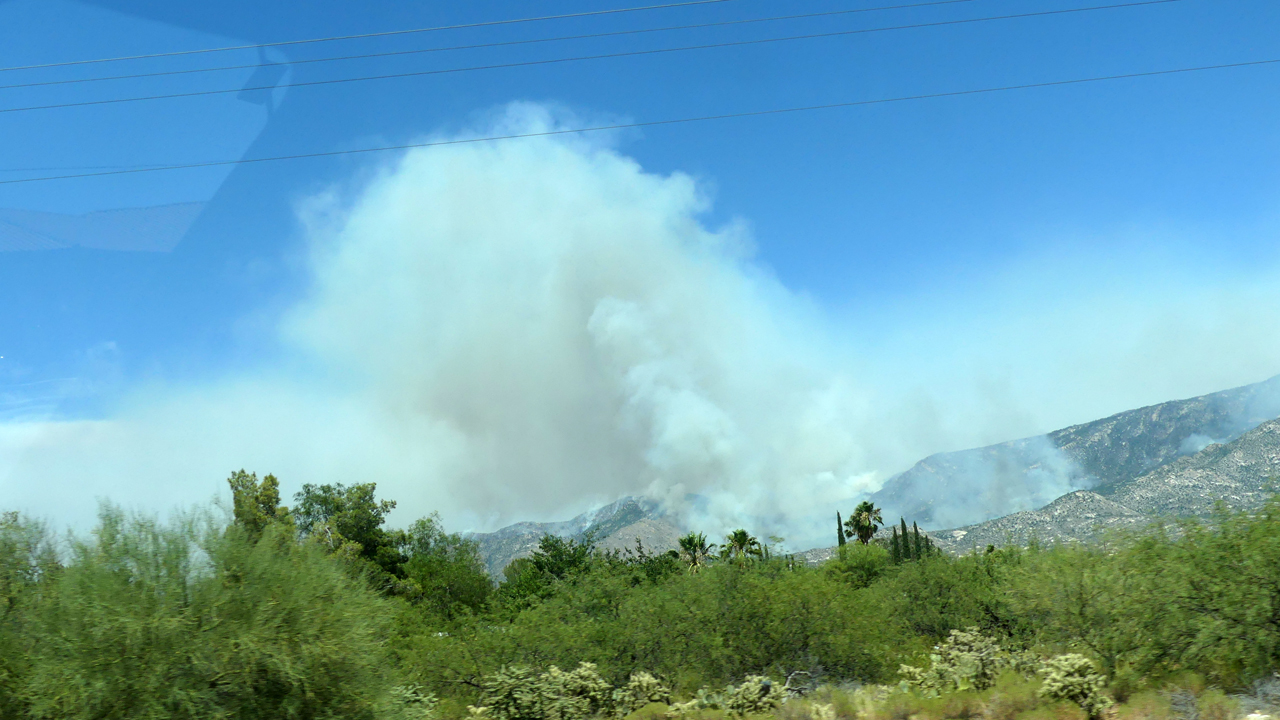 As we drove north around the Catalinas, there was no escaping the impossible size of the fire. It wrapped all the way around the range, from Pusch Ridge, east to Ventana Canyon and north to the outskirts of Reddington. And please don't tell me that wildfire is "natural", and this fire was the result of "years of suppression"! I have lived in Tucson for 20 years. No wildfire ever flowed this far down the mountain. And there was never any history of fire suppression at that elevation, because there was no need for it. 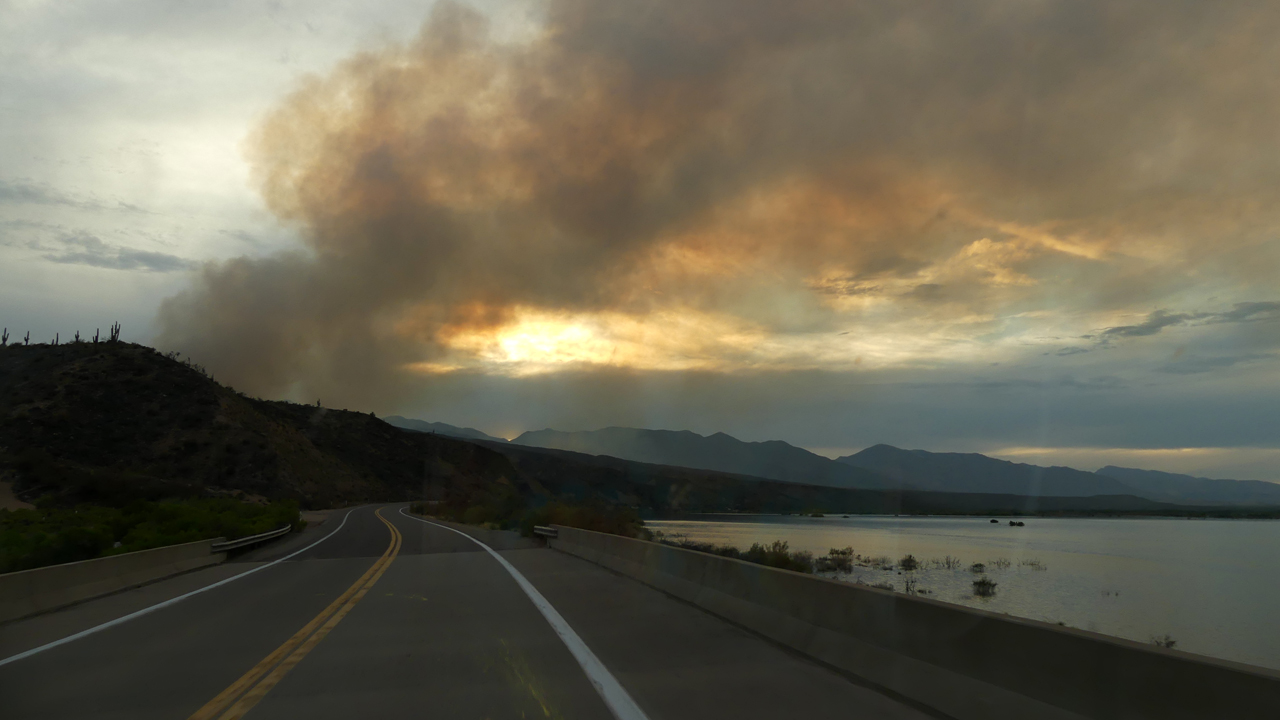 We had quite an exciting ride north on AZ 188, which just recently reopened after the Bush Fire, the largest in the nation, burned nearly 200,000 acres. We were shocked to see every blade of grass charred right to the edge of the road, as if Roosevelt Lake was the only thing that prevented this fire from sweeping north into the Sierra Ancha. 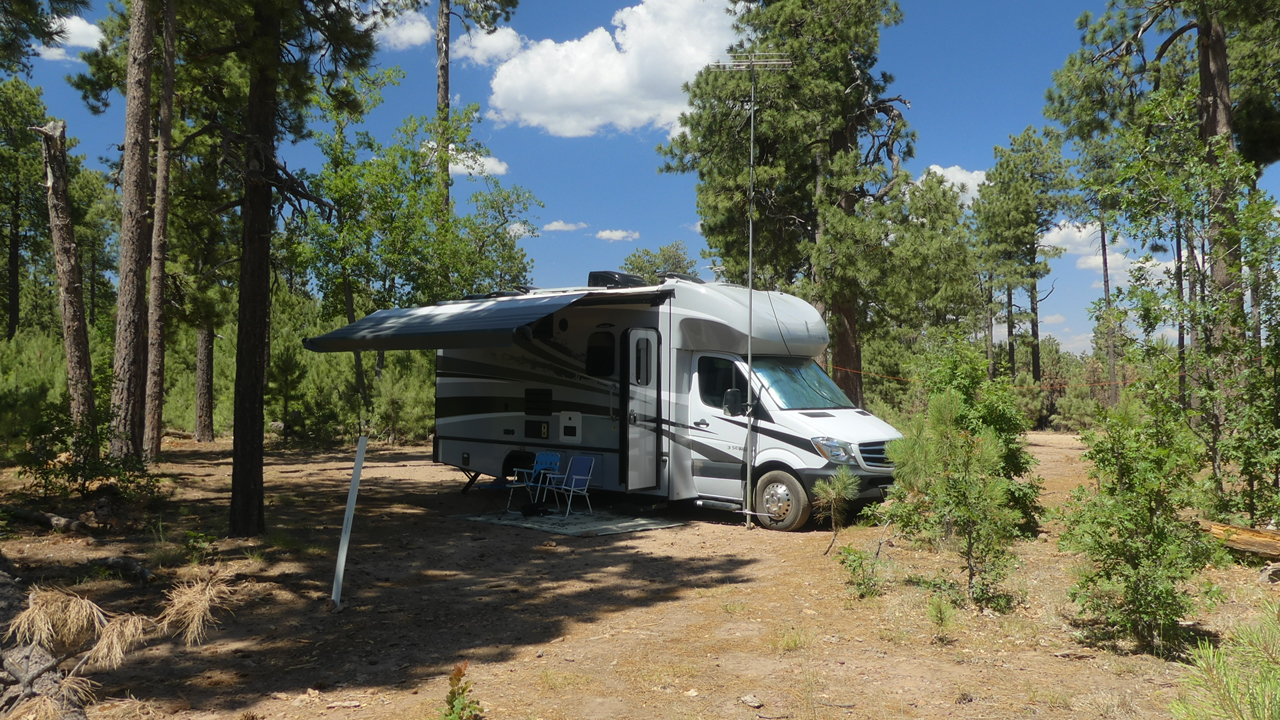 After pulling over for an ice cream break, we realized our refrigerator wasn't working. Dennis struggled mightily in the heat to troubleshoot the problem, but eventually we realized it was time to just cook dinner where we were and then head into Payson for as much dry ice as we could carry. We reached the edge of the Rim very late and pulled into the first available pullout. Next morning, we continued east on FR 300, finding a spot to our liking on the edge of a vast meadow near the junction with FR 308. 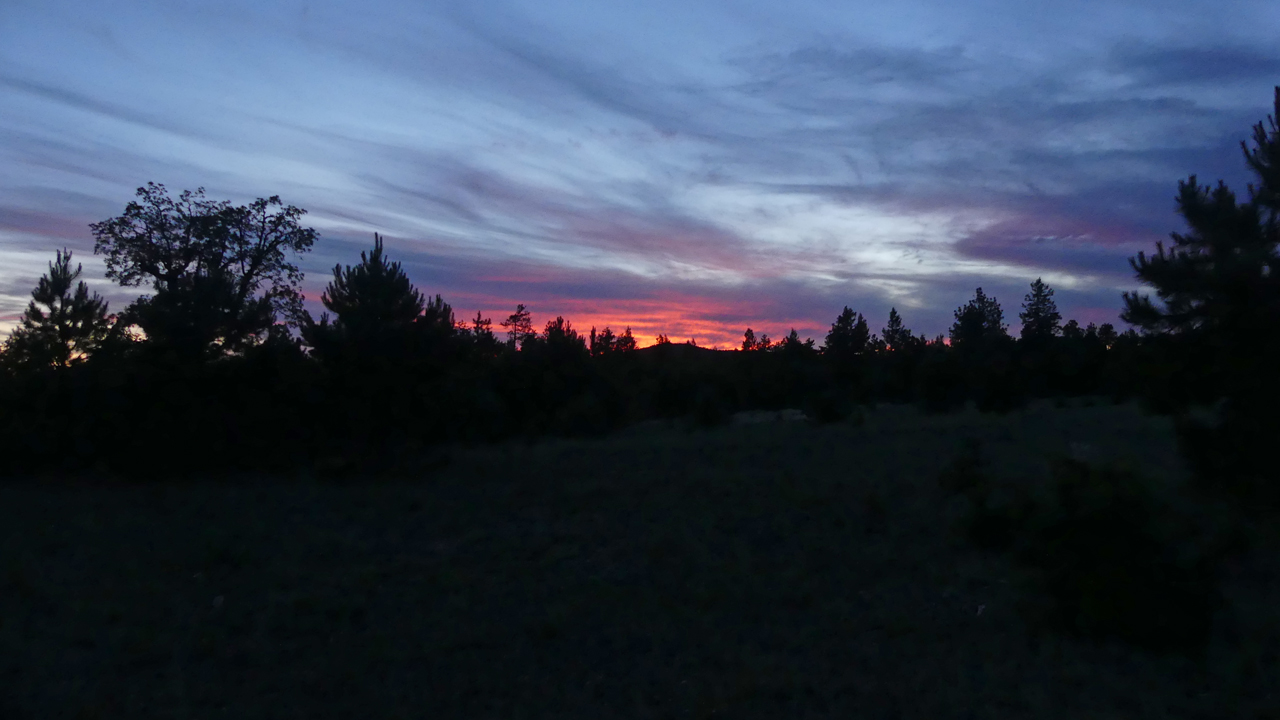 With a whiff of internet and a bit more time, Dennis was able to trace the problem to a thermal cutoff fuse that shuts down the unit when it registers excessive heat. Unfortunately, what it considers "excessive heat" is pretty much just an average summer day in Tucson. Dennis bypassed the thermocouple and we were back in business. 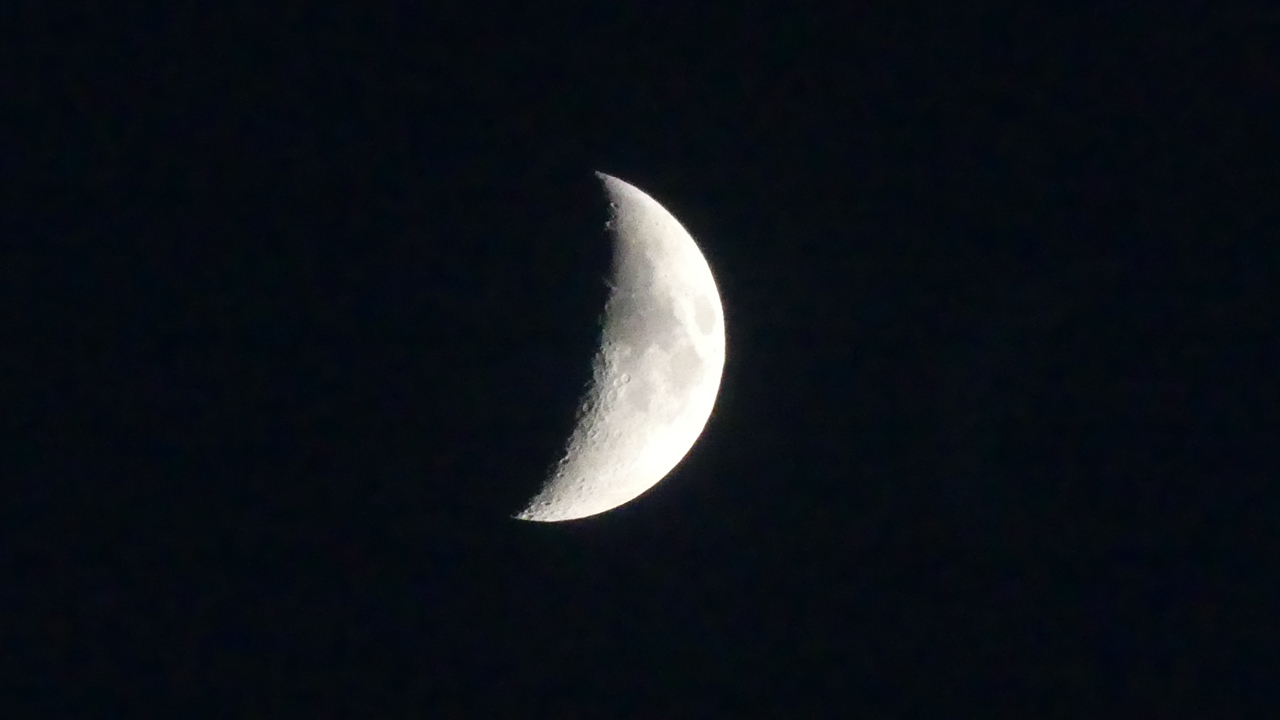 I should add that earlier last week we found the mirror in pieces on the bathroom floor, the glue that held it in place having succumbed to the heat. Dyna is not fond of hot weather! 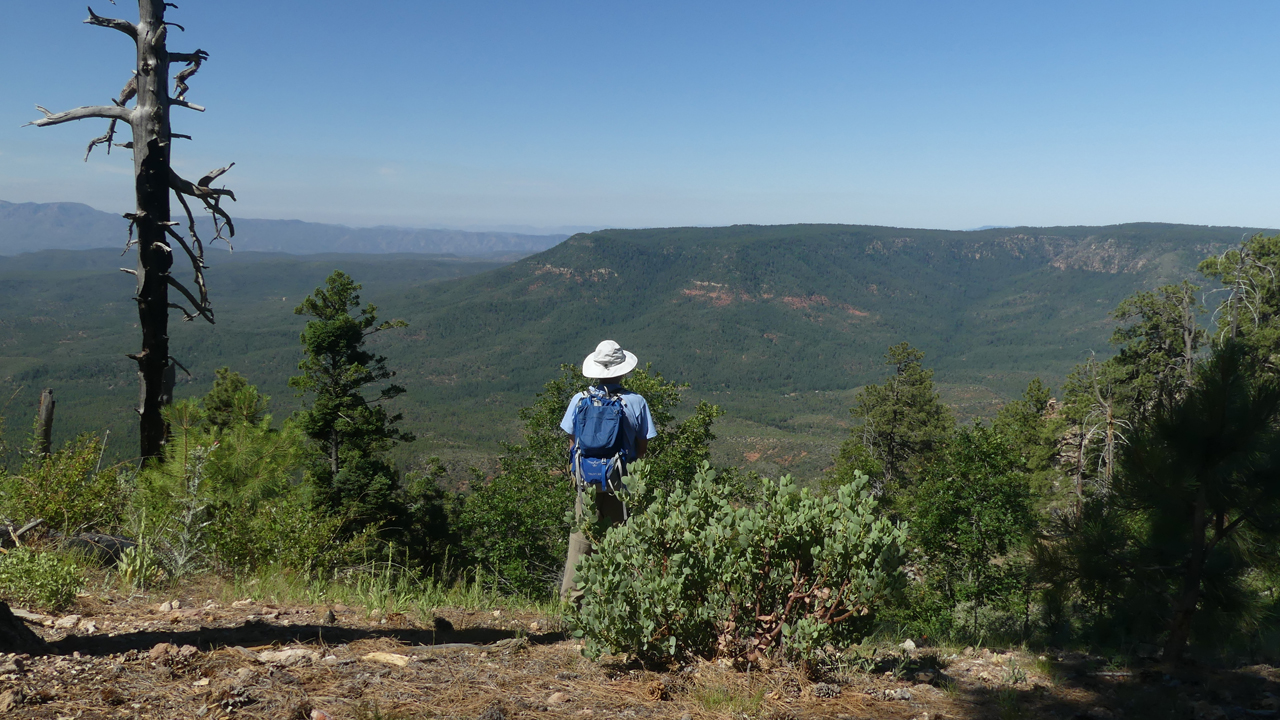 Most days we did one hike in the morning and another in the evening, not just to appreciate the sunset but also to enjoy a stronger internet signal. We were fortunate that our campsite was close to two prominent peninsulas with non-stop views.

Most of our hikes were like this. We just chose a destination and bushwhacked through the forest, under a towering canopy of Ponderosa pines. Since there is almost no underbrush, you can walk anywhere, and the Rim rewards you with constantly changing views. 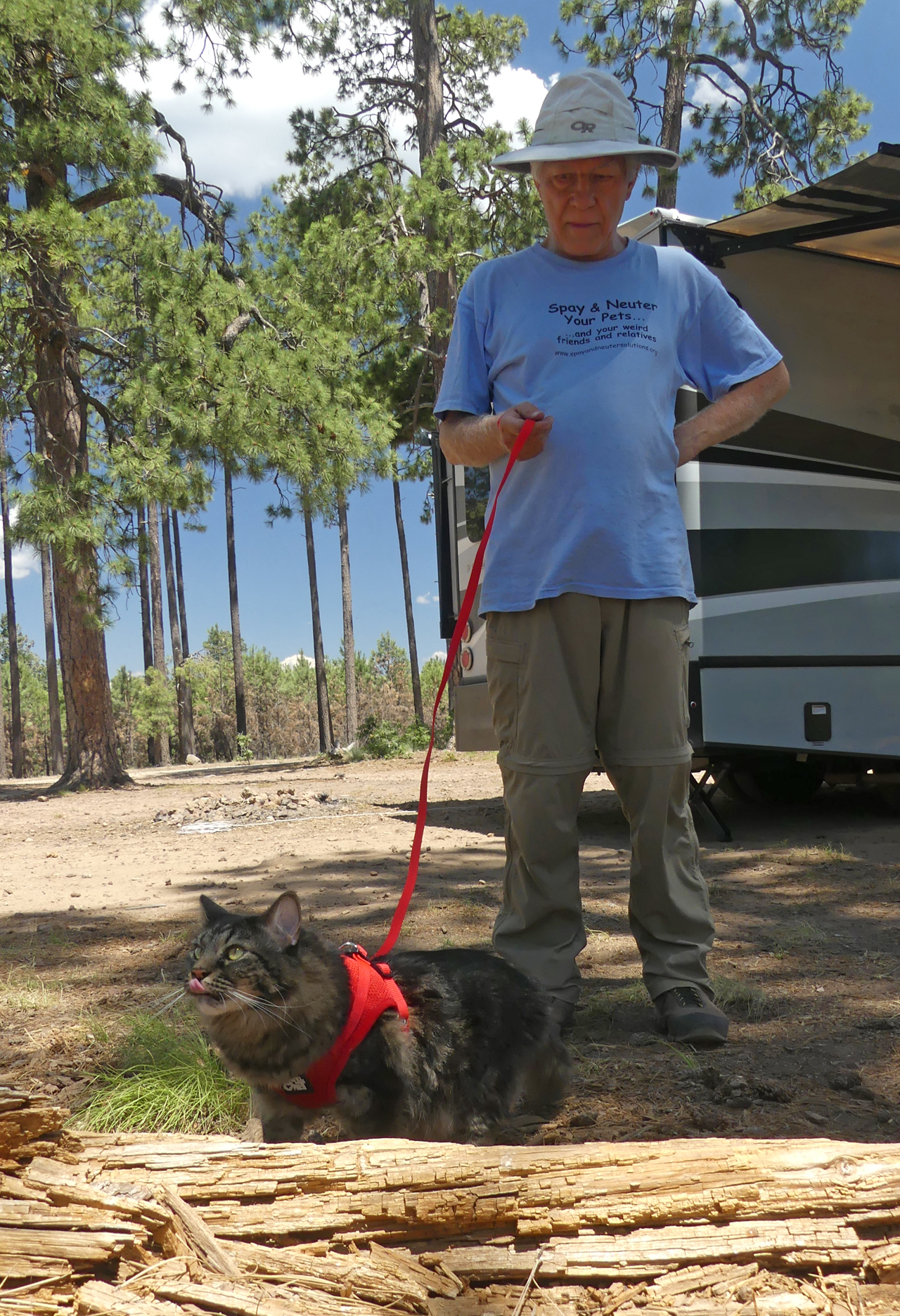 We got a new harness for Elio. He tolerates this one quite well, and went for longer and longer walks with Dennis. 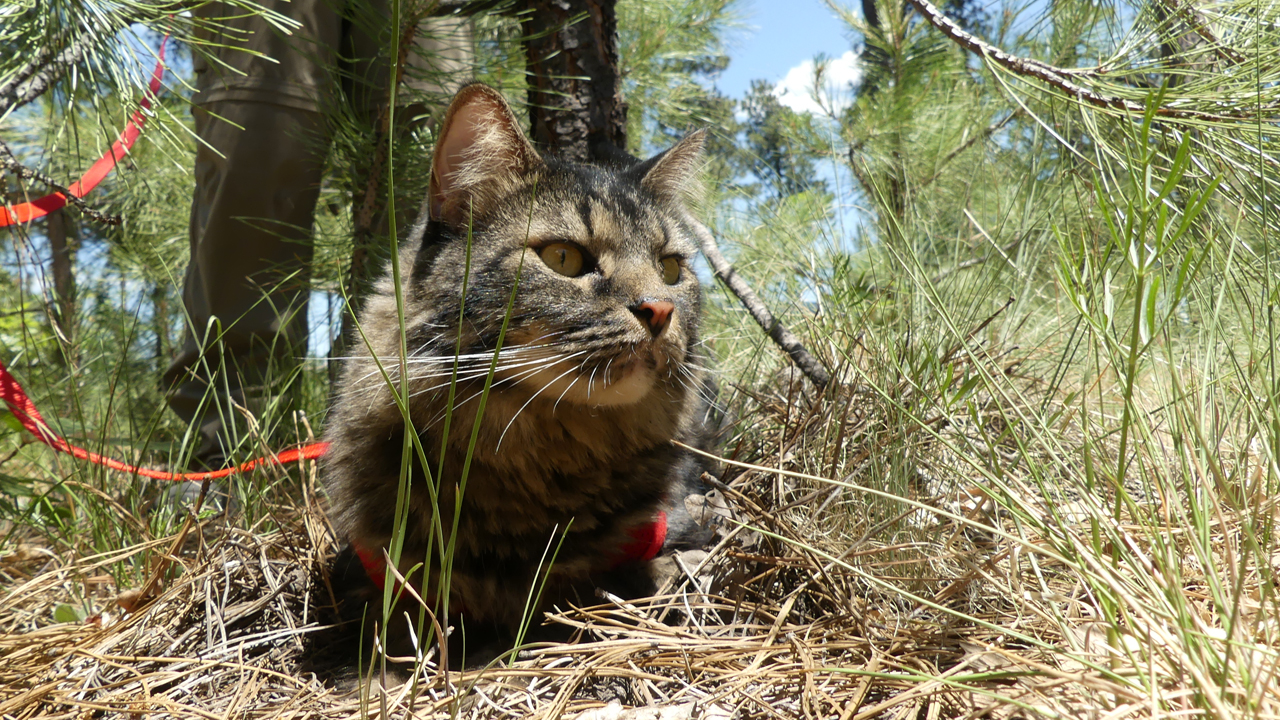 Afterwards he sleeps for hours, too tired to even paw at the screen door. 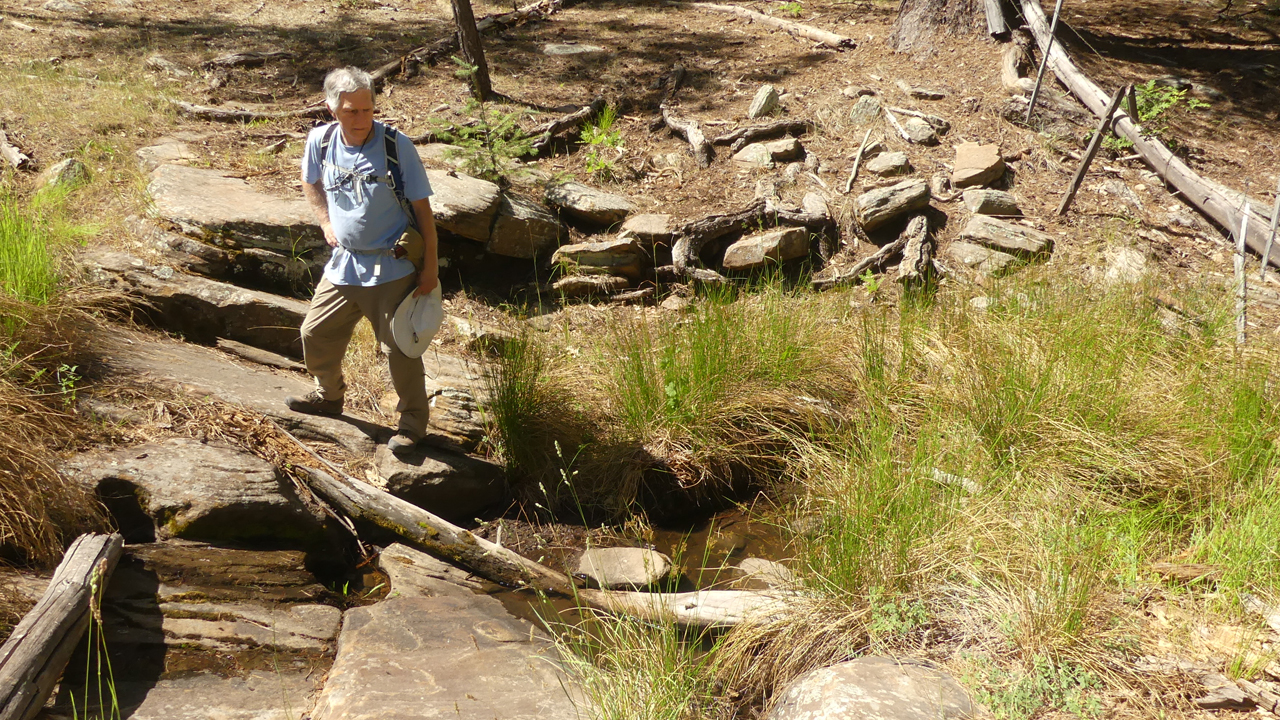 One of our hikes took cross-country to Lee Johnson Spring, a trickle of water flowing over an ancient stone dam. Part of the route followed a closed road, where we were startled by three dirt bikes, barreling down on us at very high speed, gunning their engines and kicking up as much dirt as possible. Without a word, Dennis and I began dragging as many logs as we could manage across the road, then raced up the hill, hearts pounding. We may be old and slow, but we're still kind of badass. 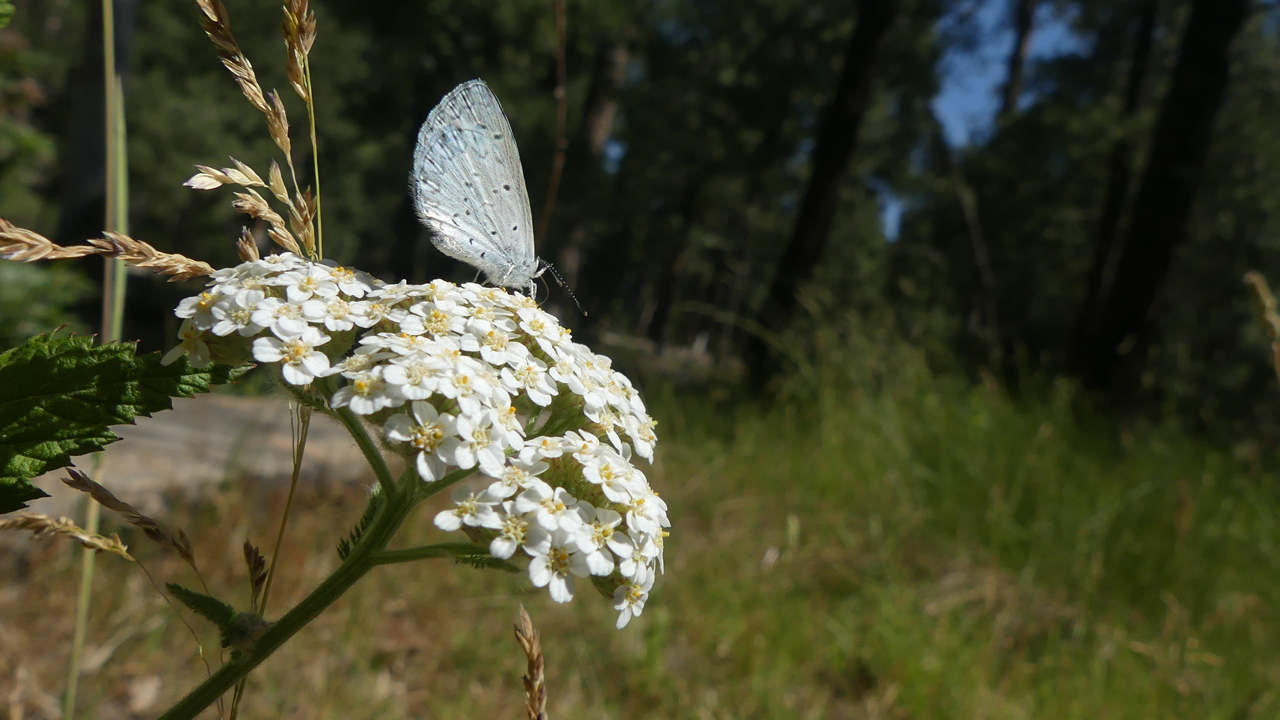 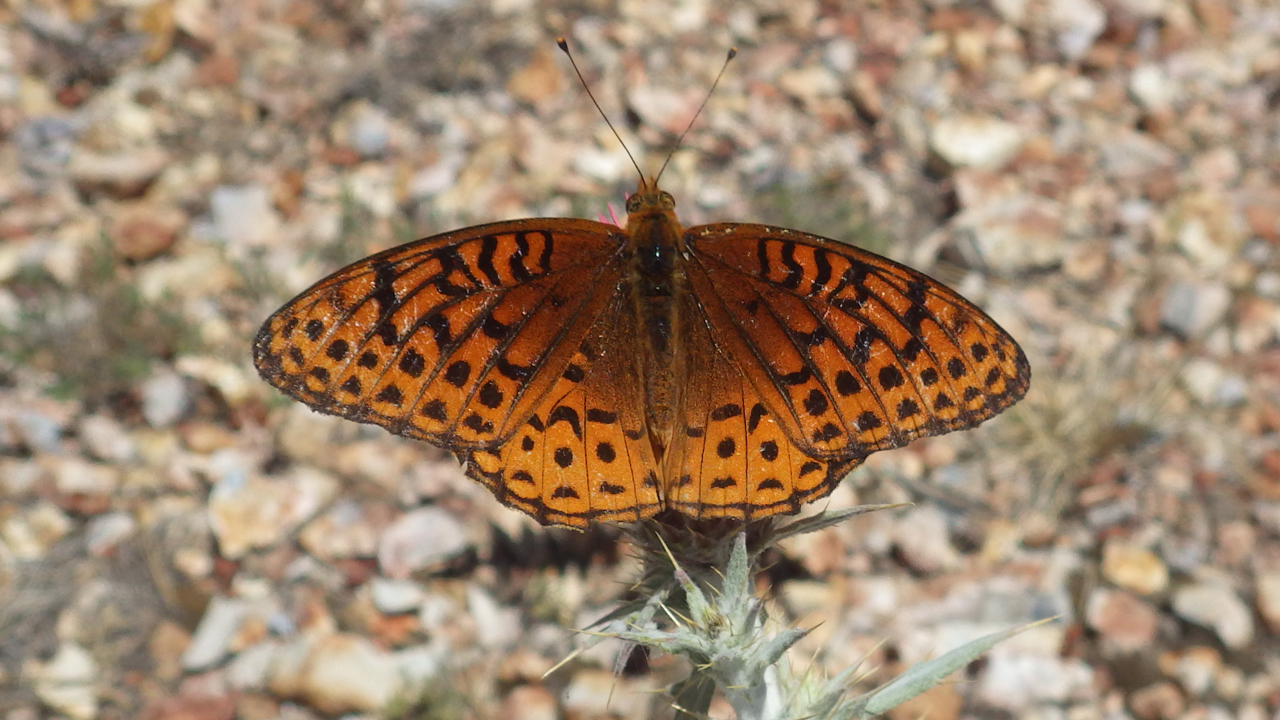 For a change of scenery and better internet, we moved about three miles east to a prominent burn scar with sweeping views in all directions.

Winds gusting to 50 mph tossed our rig to and fro like a skiff on the open ocean. When the wind blows this way, well, it reminds me of a song by Eb Eberlein. 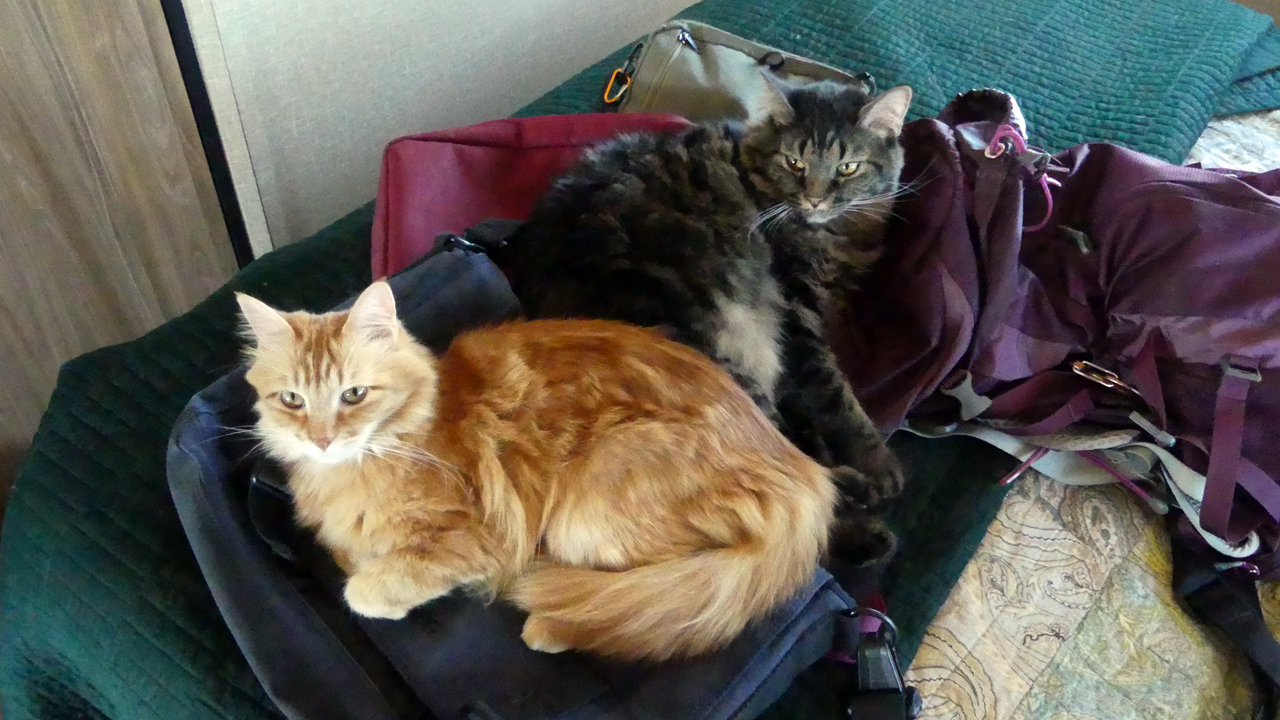 The rocking made our cats so nervous that they actually sat next to each other. Any port in a storm! 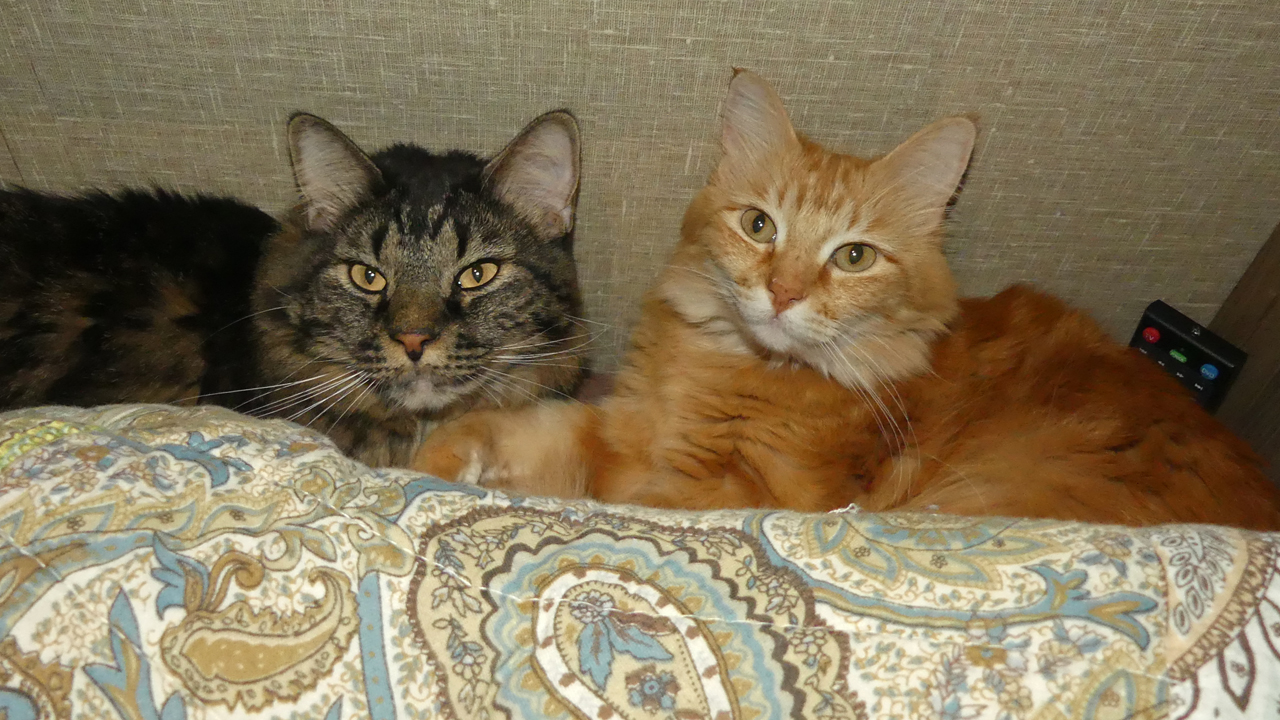 We finally reoriented Dyna to point directly into the wind. Much better! 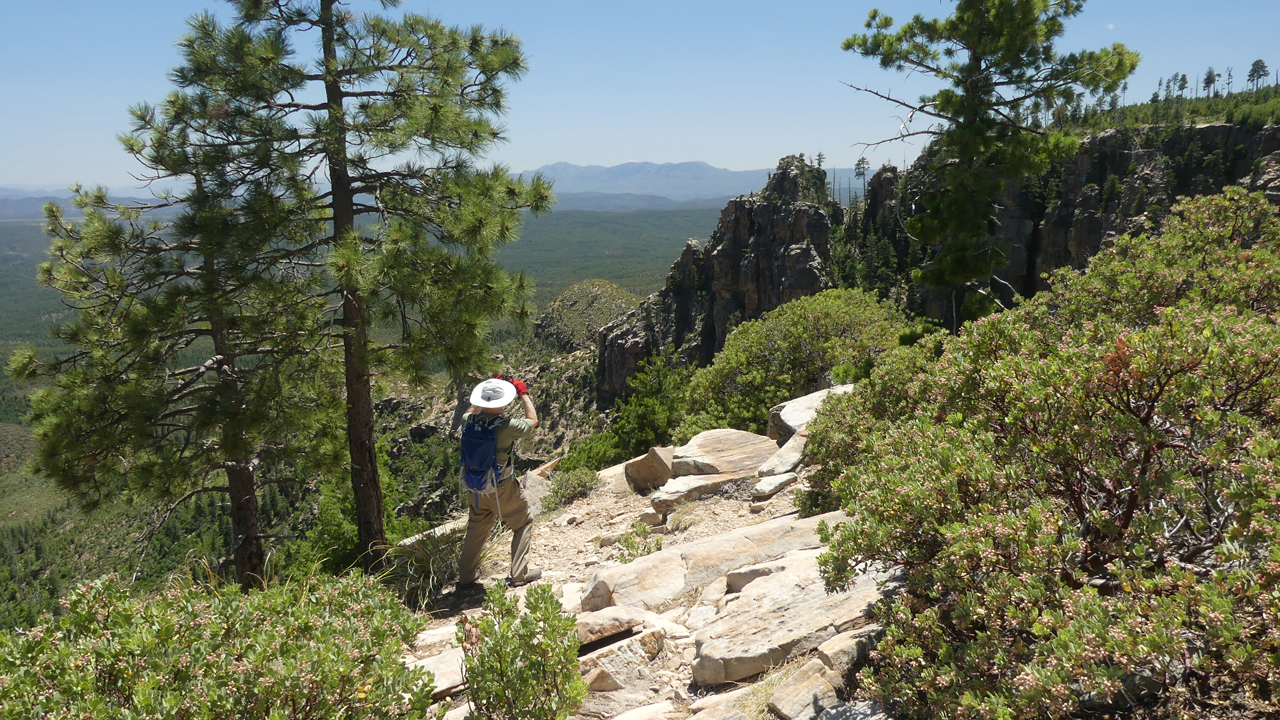 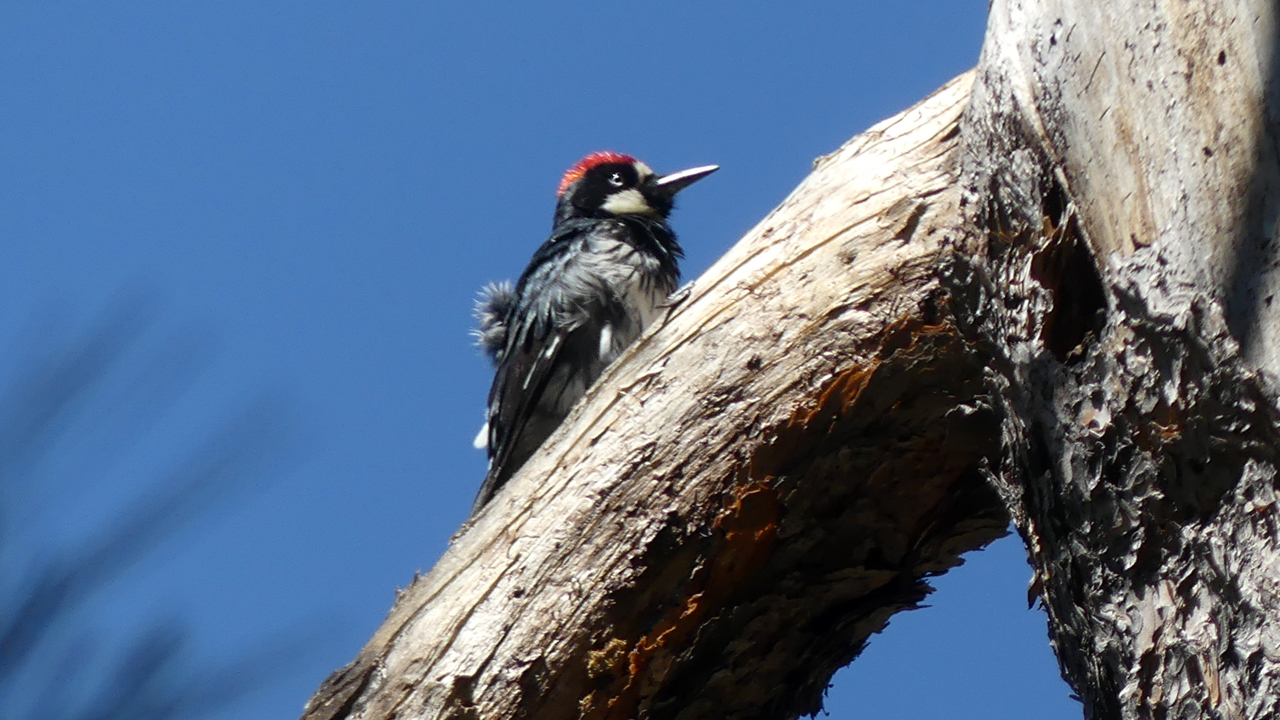 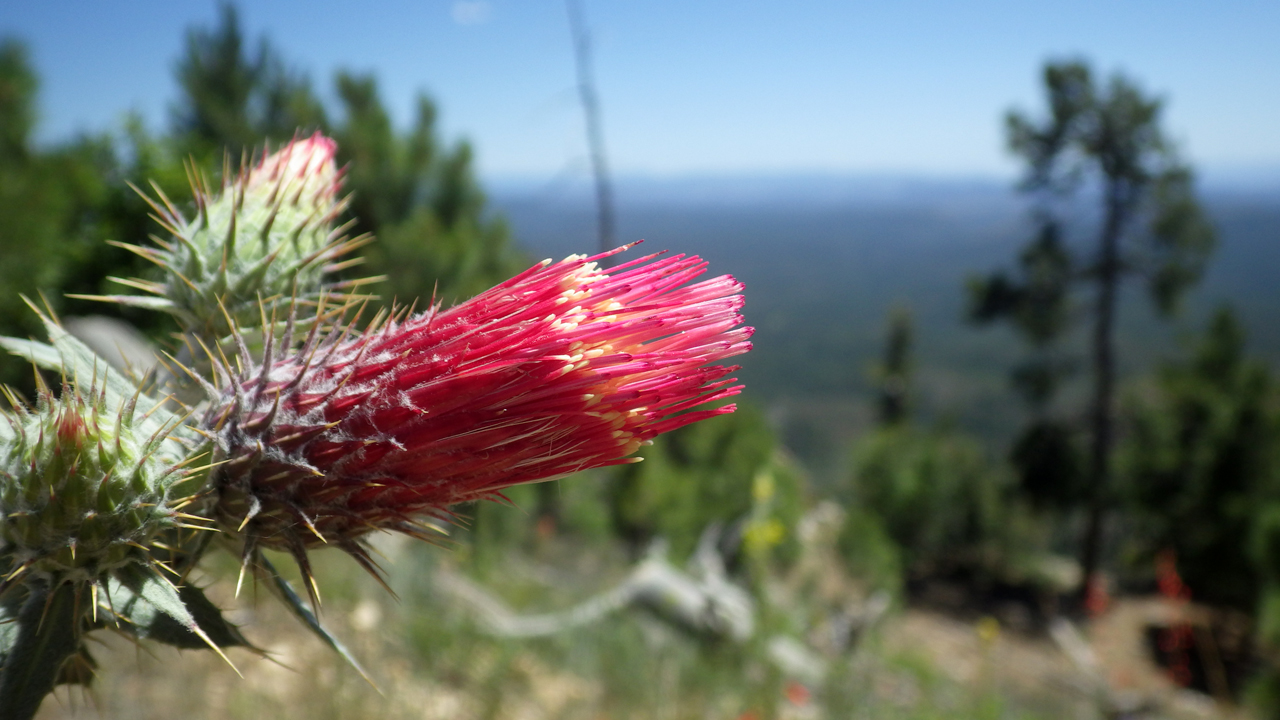 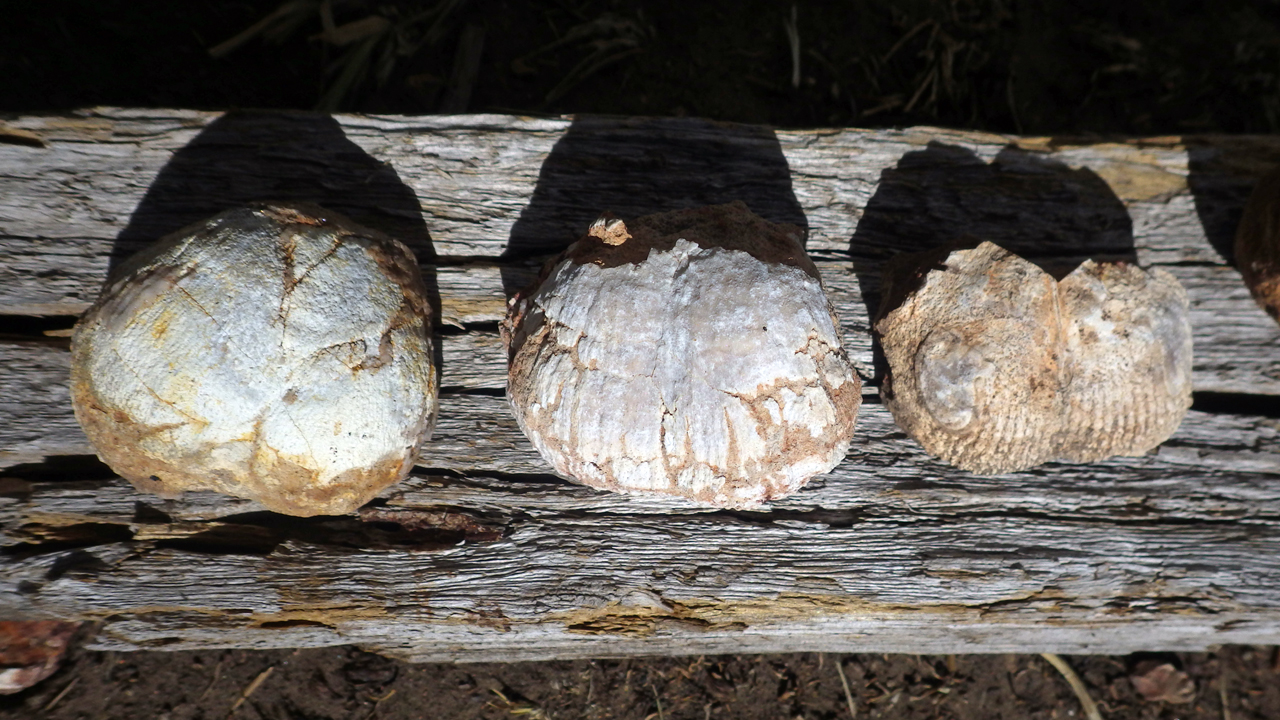 We have been walking the shallows of the Thalassian Sea and collecting old seashells. On our daily hikes there have been many shells available for the picking. 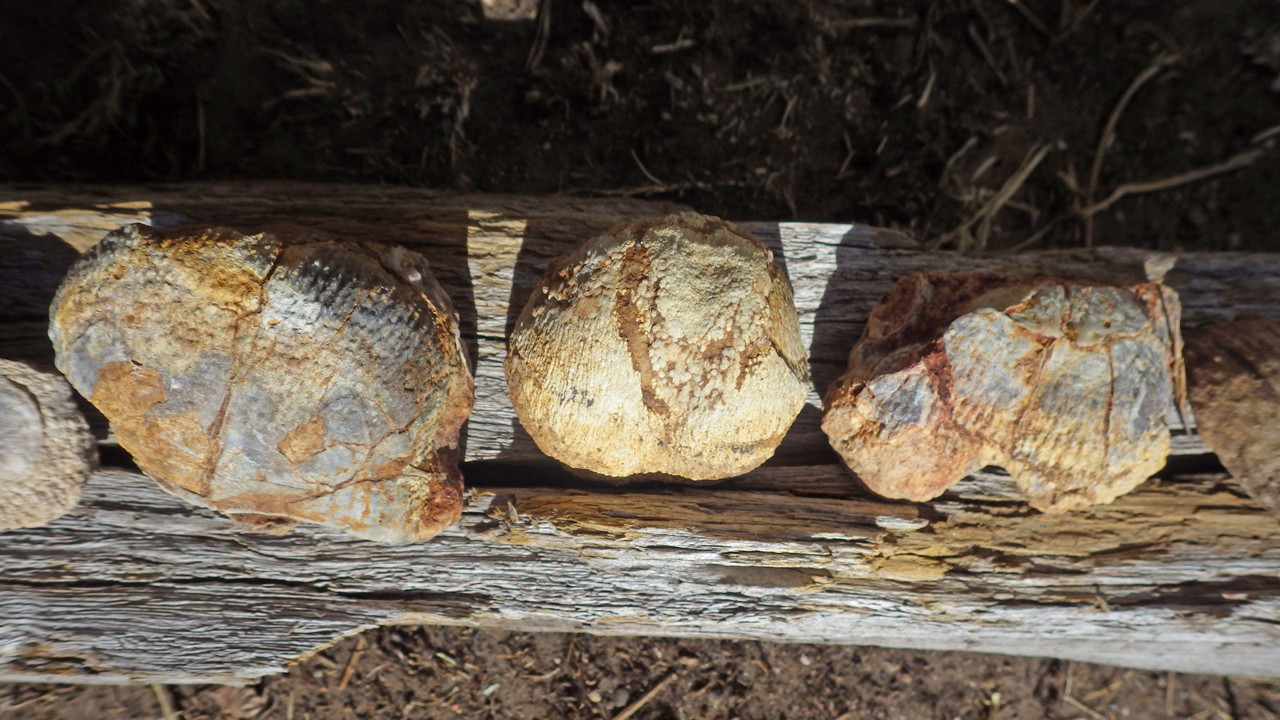 The elevation of the Thalassian Sea is about 7500 feet these days here on the Mogollon Rim. I think these shells have been sitting here awhile. 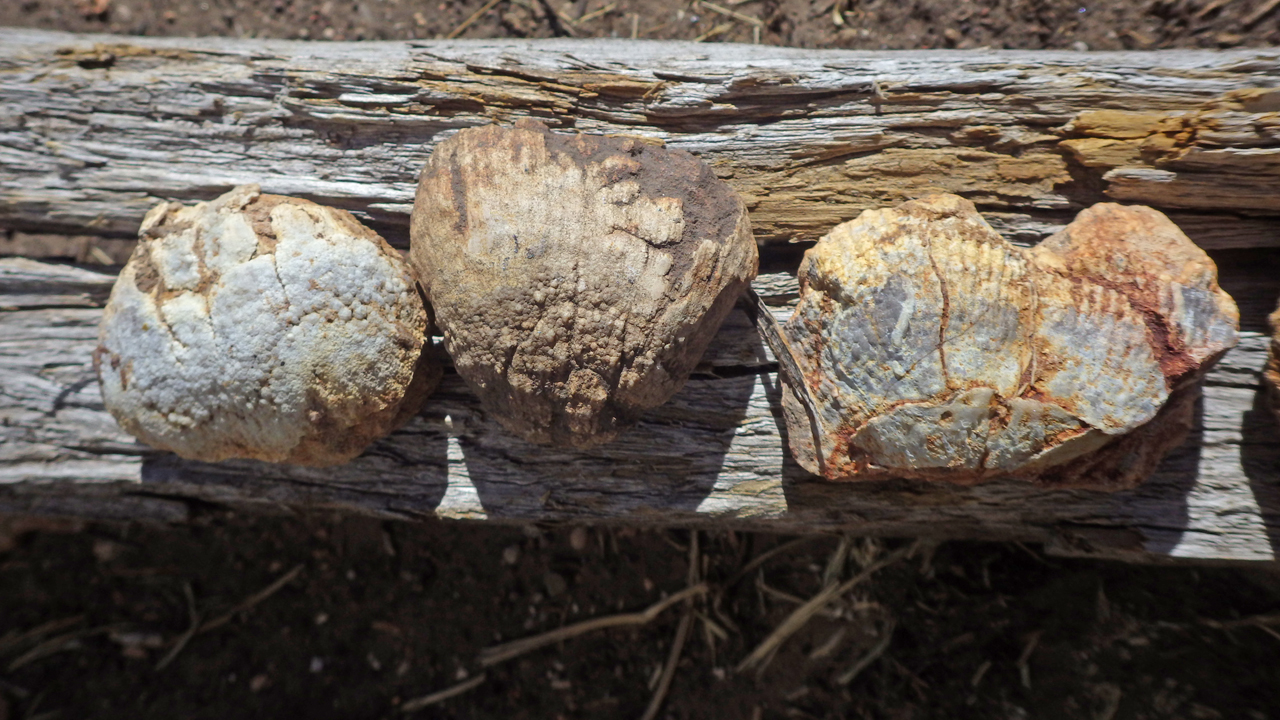 It turns out that these were likely alive in the geologic Permian period about 270 million years ago. They are known as Productid Brachioipods and there are many places along the western Mogollon Rim where they can be found.