It happens every year about this time. The heat and drought become unbearable as we wait anxiously for the monsoon rains. This year was particularly bad, as we witnessed the two largest wildfires in New Mexico history, including one in our beloved Gila Wilderness. As of this writing, the Black Fire has burned more than 325,000 acres — areas I never got a chance to explore, and areas I loved but will never see again. I became obsessed with this fire, listening to every daily briefing and feverishly checking the Goes Image Viewer for smoke plumes and fire temperature.

There's only one cure for those mean, low-down waiting-for-the-monsoon blues. But where to run when all New Mexico national forests — except, oddly, the Gila — were closed due to fire and extreme fire danger? 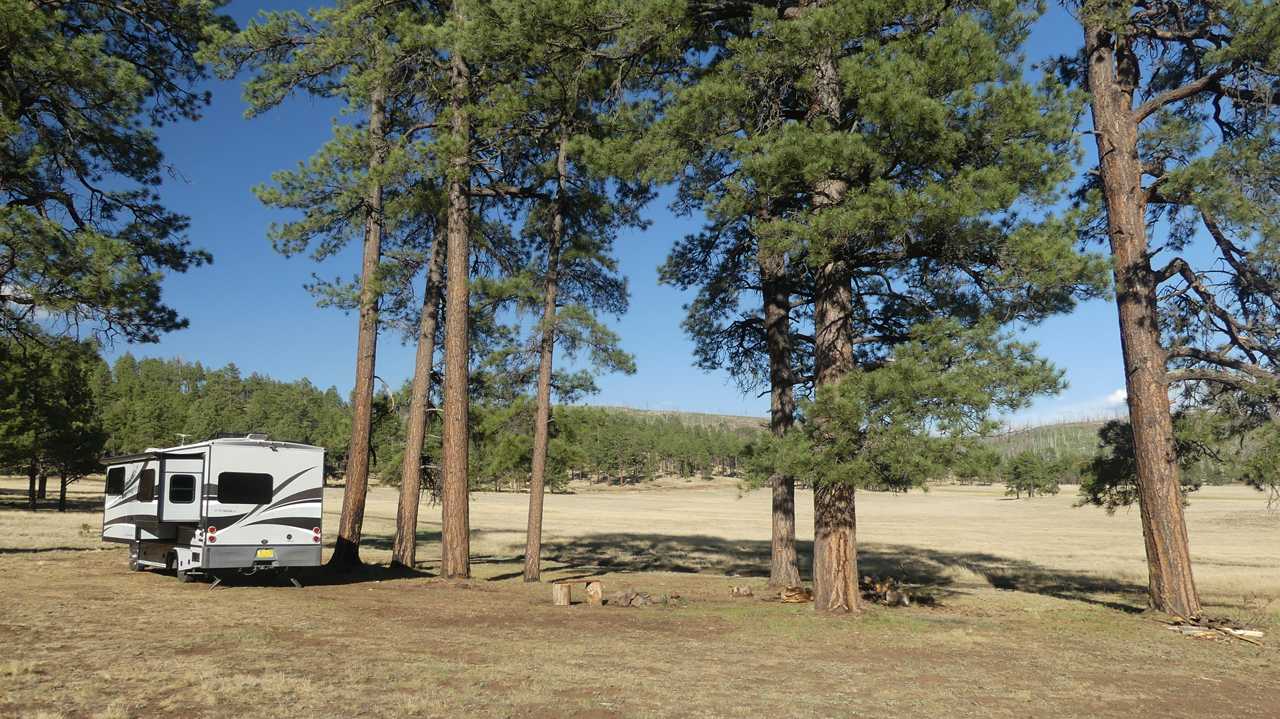 We concluded that the closest high country was across the border in Arizona's White Mountains. Like New Mexico's Sacramento Mountains, the White Mountains are a very high (+9000') undulating plain with numerous local prominences. We found a fine campsite at the end of a rough gravel road on the edge of a broad alpine meadow. 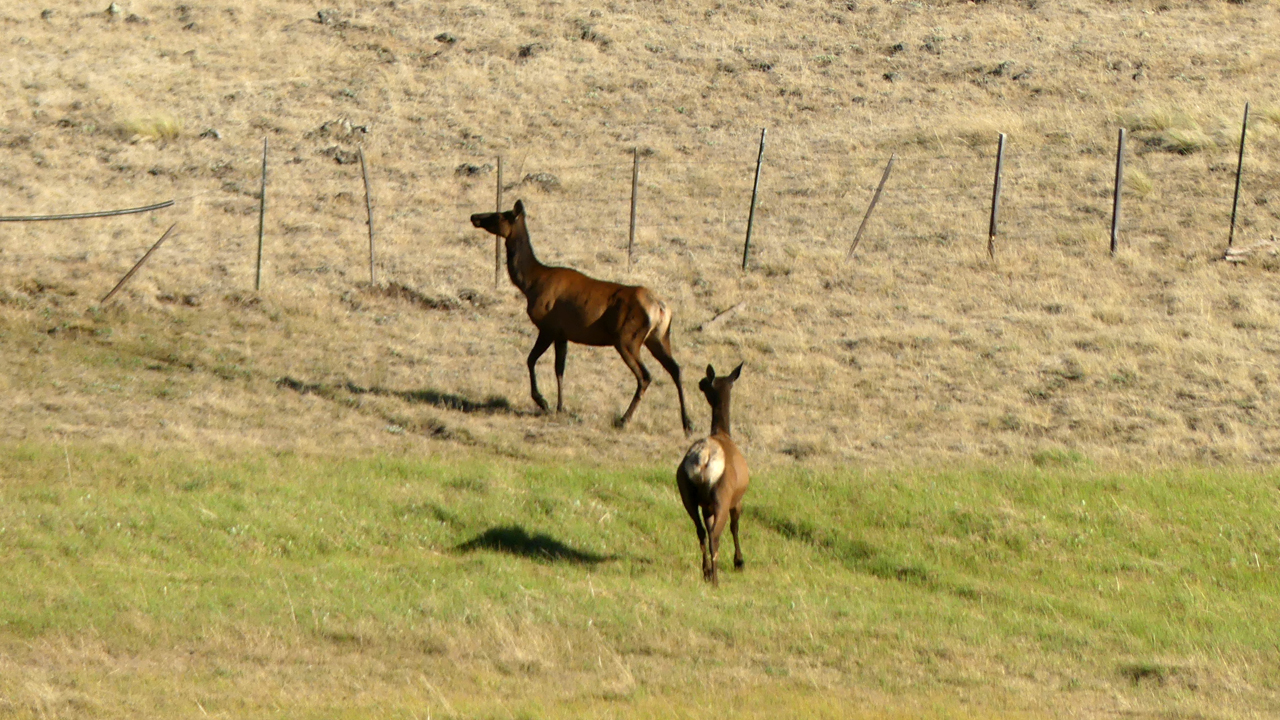 This is paradise for elk, with a tiny stream and special "elk crossings" ‐ lower fence sections where the top strand of barbed wire is encase in a plastic pipe so the elk can leap over unscathed. 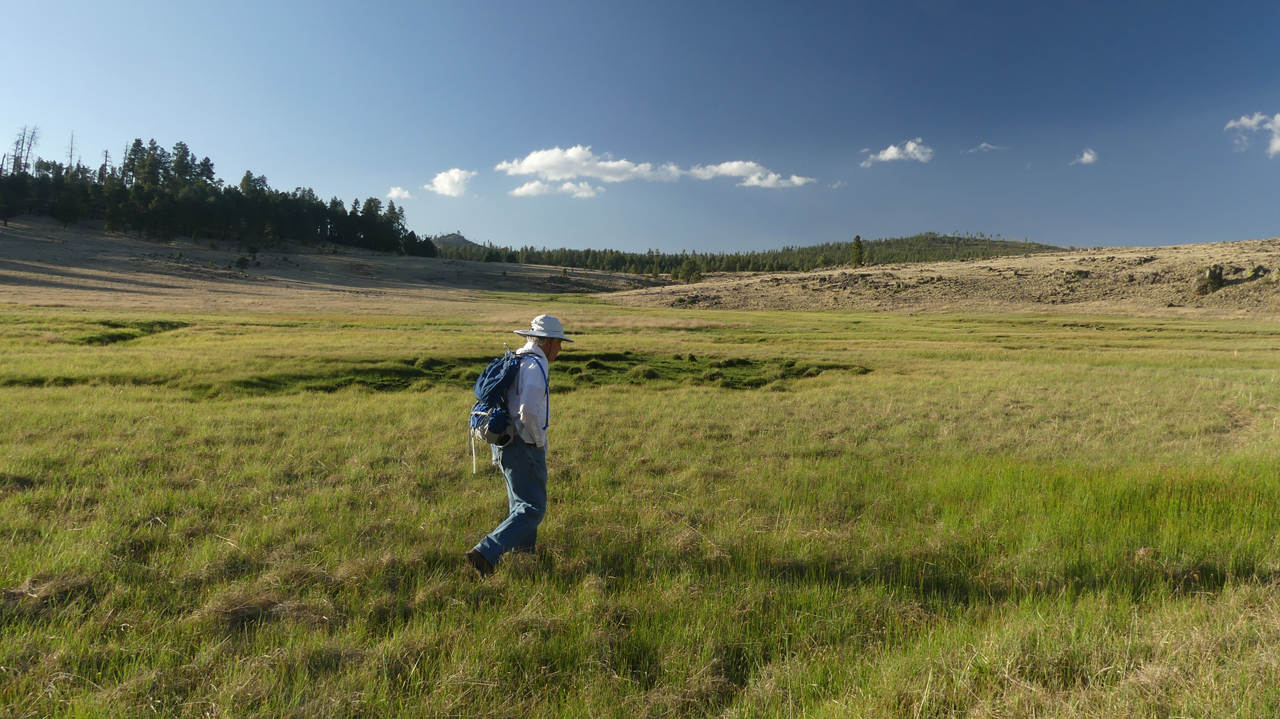 We took a sunset hike across the meadow and into a small drainage that evolved into a sparkling stream that feeds a lush cienega.

We sat out until well after dark, admiring a dramatic full moon-rise.

The next morning, we continued west along AZ 249, stopping at the Three Forks area that I had noted on a previous trip. 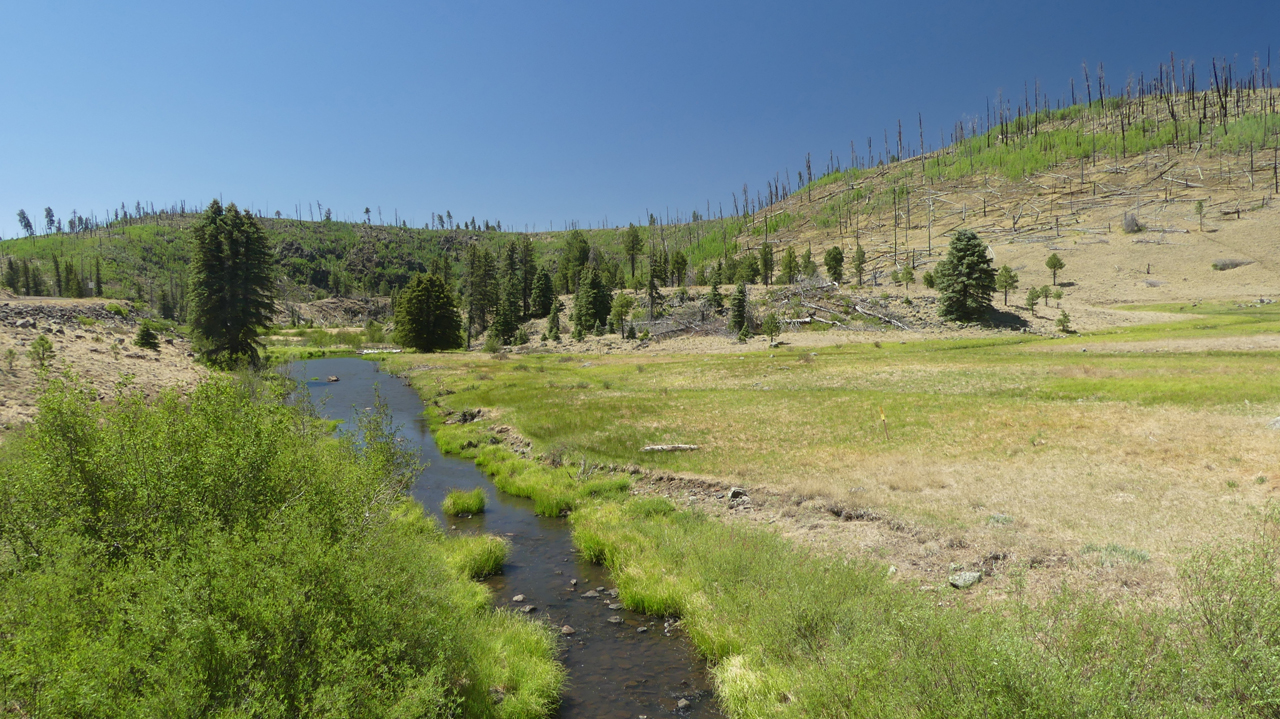 The North Fork Black River, Boneyard Creek and Coyote Creek come together here to form a large cienega that is protected habitat for the endangered Three Forks springsnail. 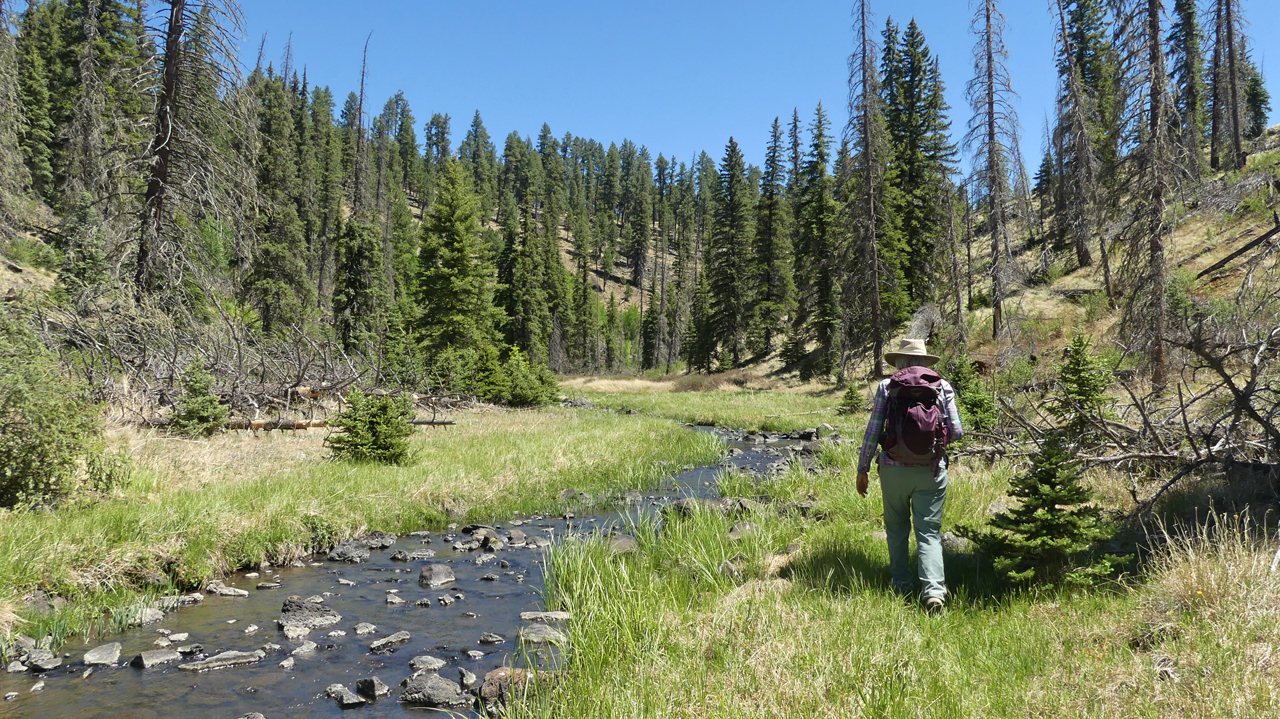 We bushwhacked along Boneyard Creek, which flows out of the tiny cienega in the meadow near the previous night's campsite in Williams Valley. 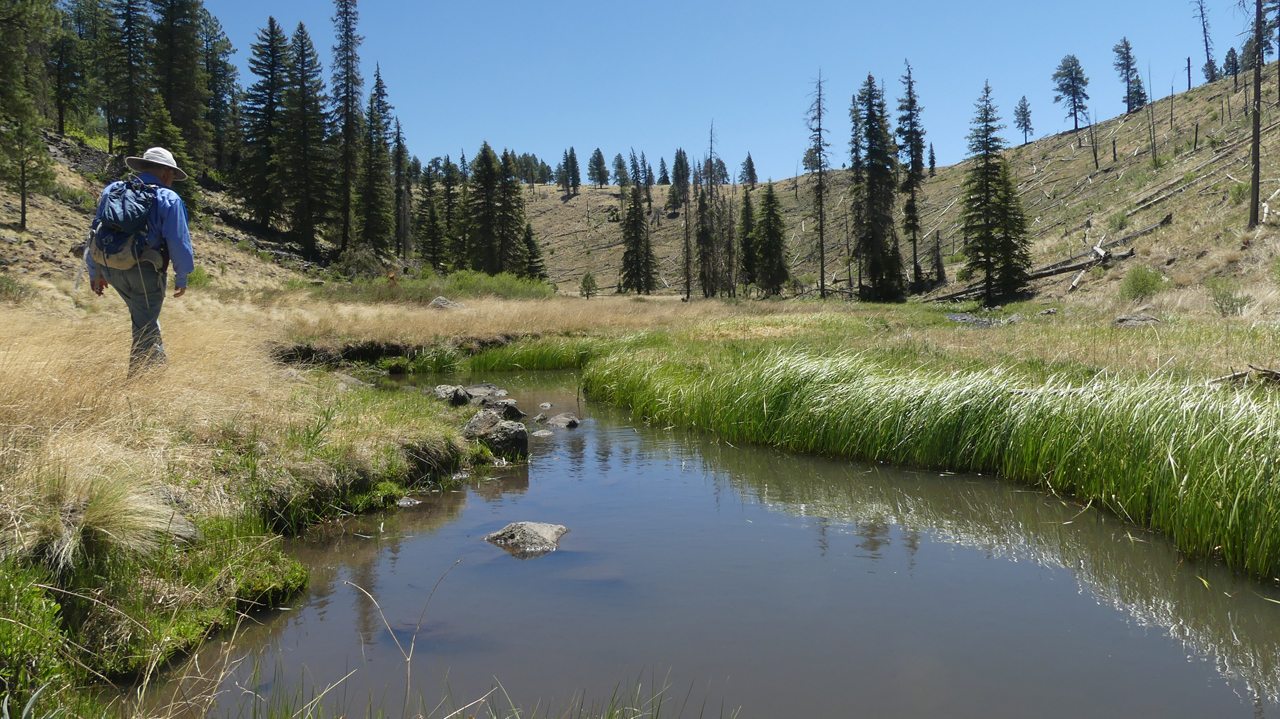 The first half-mile was brushy, but once we cleared the beaver dams, the stream meandered pleasantly through a grassy canyon with abundant summer wildflowers. 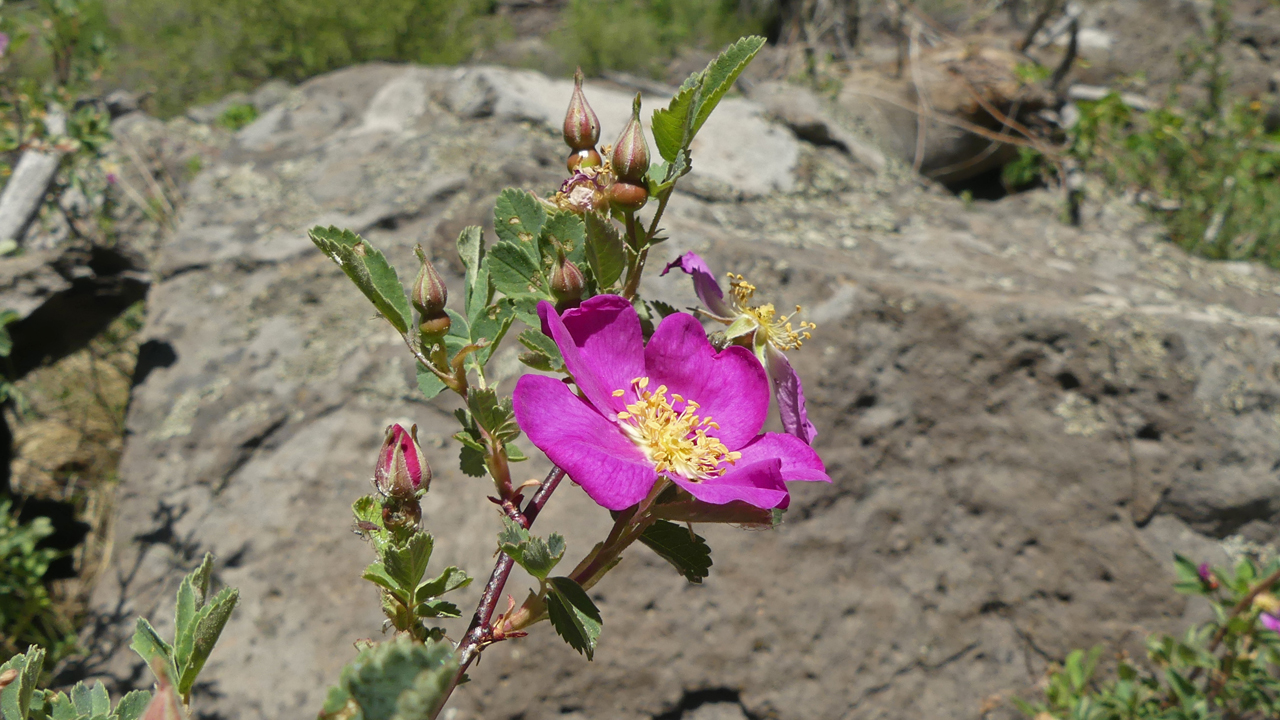 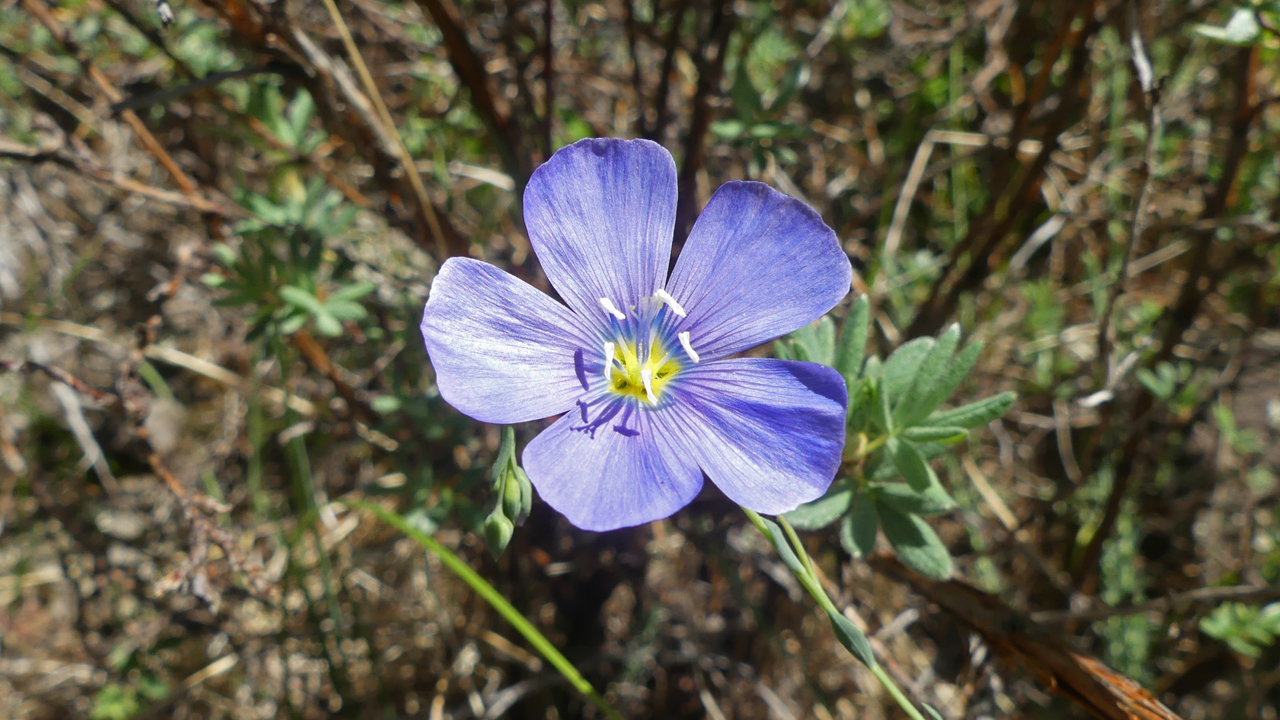 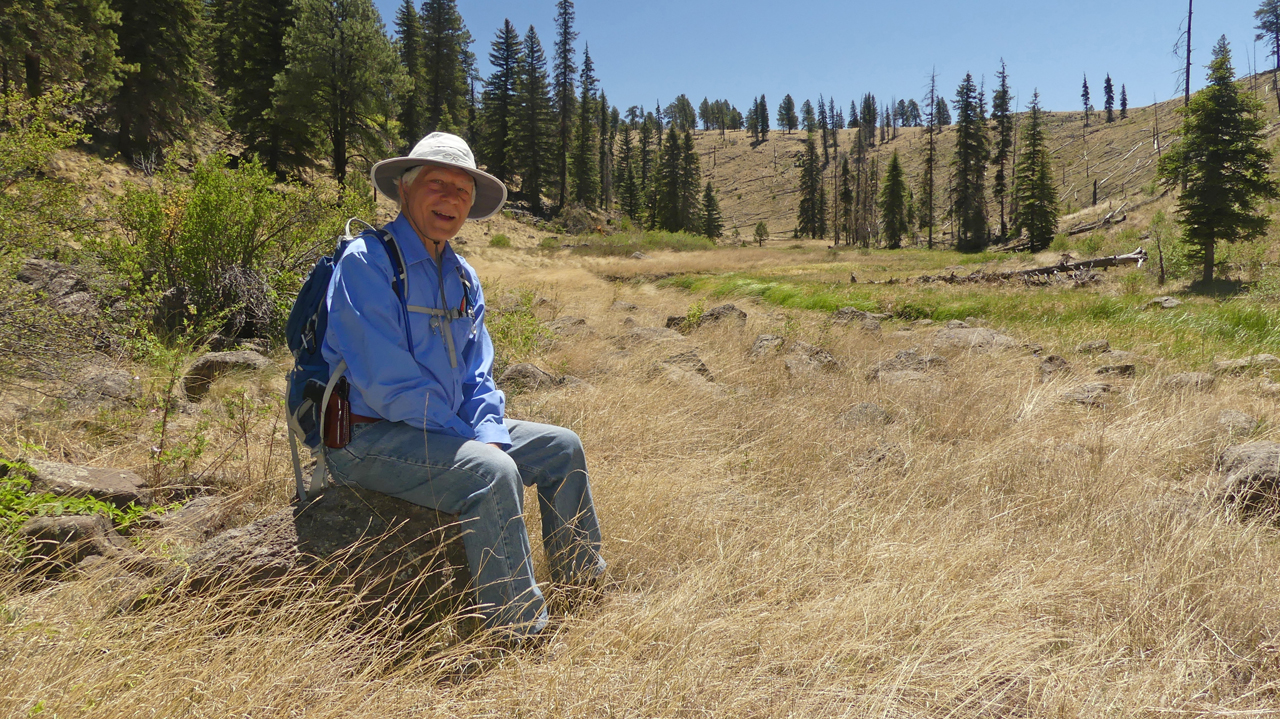 Shall we scamper up that ridge for a view? Oh why not! 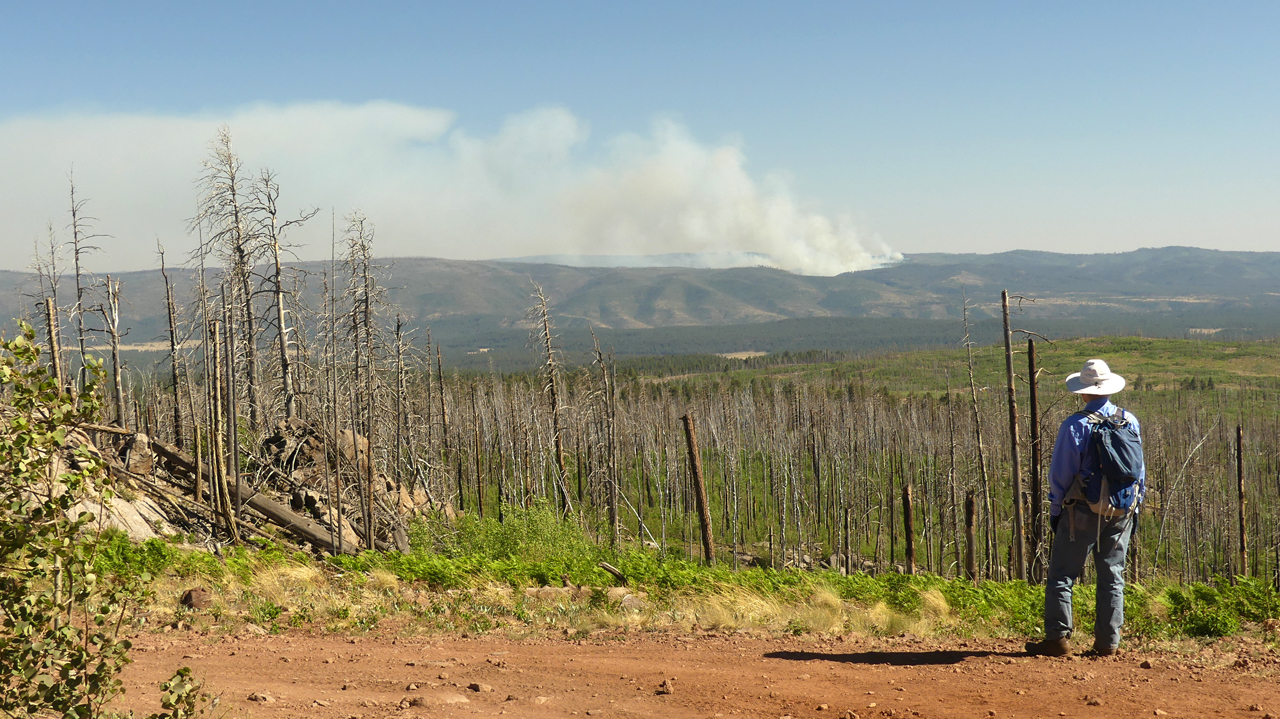 We checked into our campsite at Rainbow Campground near Big Lake, and then opted for a late afternoon hike to Big Lake Knoll. The trail begins in a recovering mixed conifer forest, but the last half mile is a steep stumble through an area scorched by the Wallow Fire of 2011 (538,049 acres). Here there wasn't a live tree left standing, and the wind howled pitifully through the bones of their naked skeletons. The knoll itself was a jumble of huge boulders and downed trees. The lookout, built in 1933, was overrun by flames from the Wallow Fire on June 4, 2011. All that remains today is a radio repeater in a Faraday cage. We tucked in behind it and enjoyed some protection from the wind, along with sweeping views of Escudilla Mountain, Big Lake, Crescent Lake, Baldy Peak, and the Fish Fire burning 15 miles due south.

An unusual day without gale force winds finally allowed us to spend some time on the water! 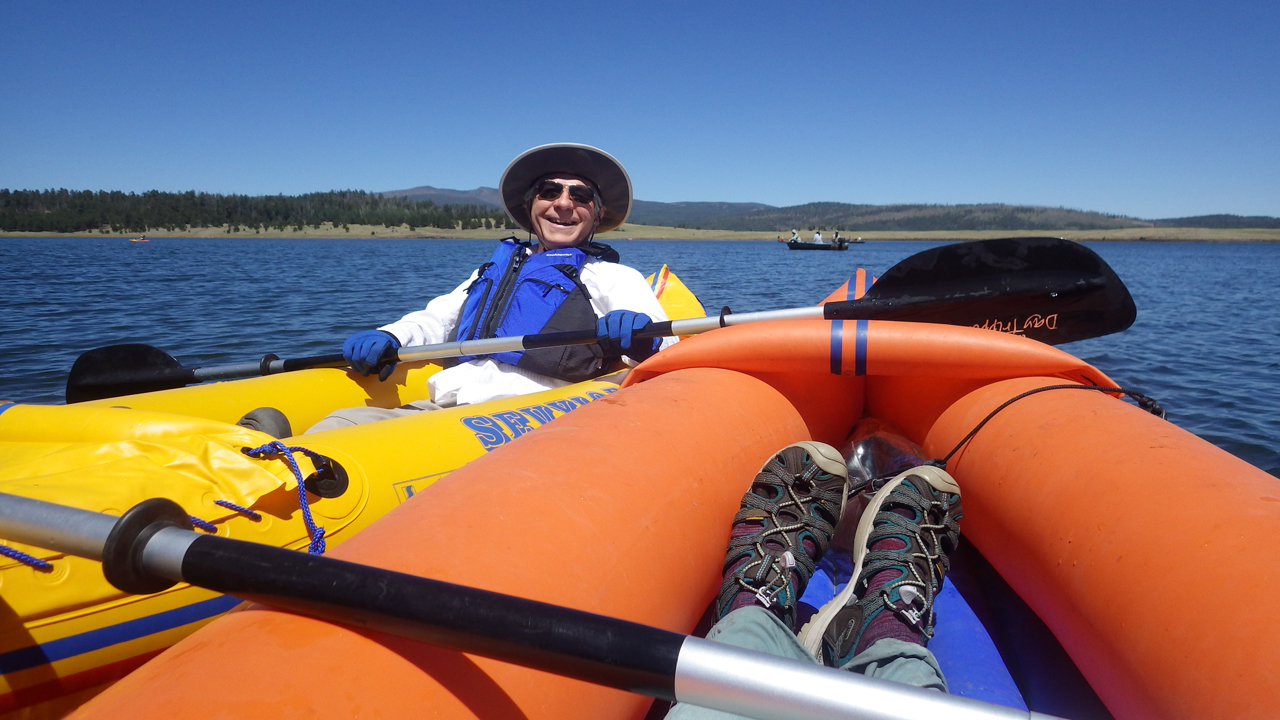 A thousand thanks to Haley F for a playmate for our Itsy Bitsy Teeny Weenie Yellow Sevylor Tahiti! 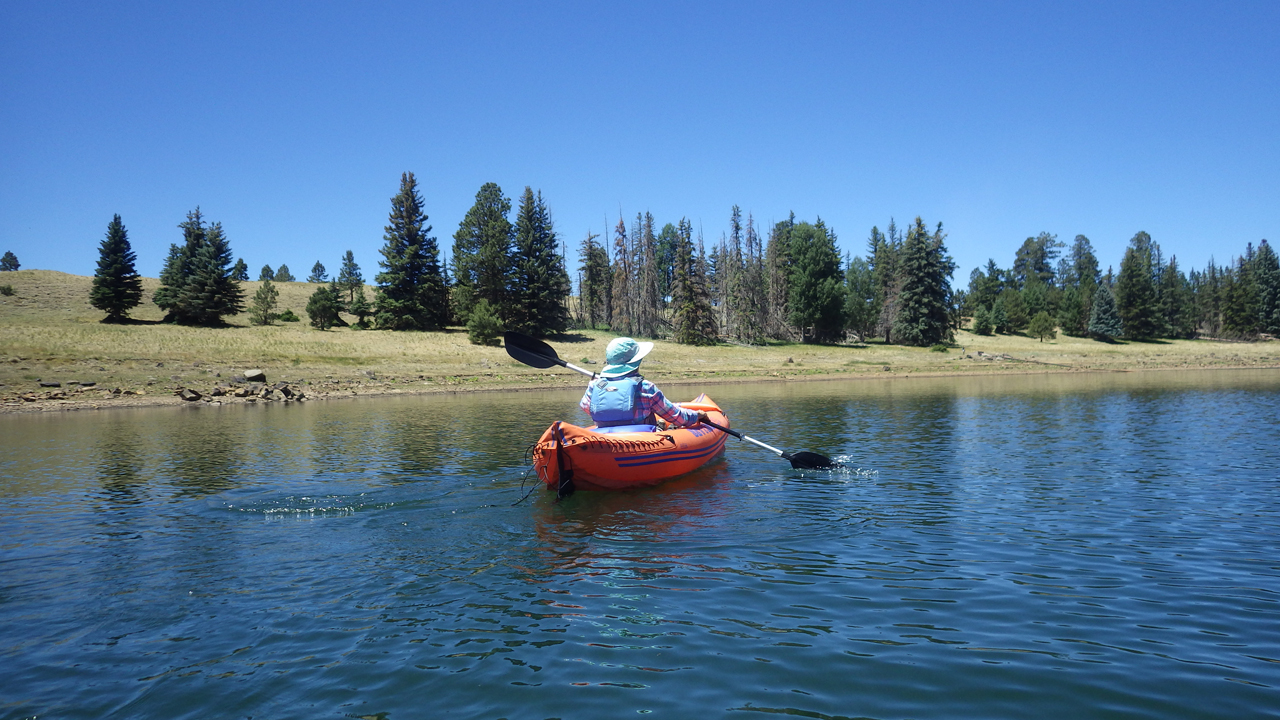 The two boats are the same vintage — 2007 — but slightly different models.

Great Blue Herons are plentiful along the shores of the lake, and Dennis captured one on take-off. 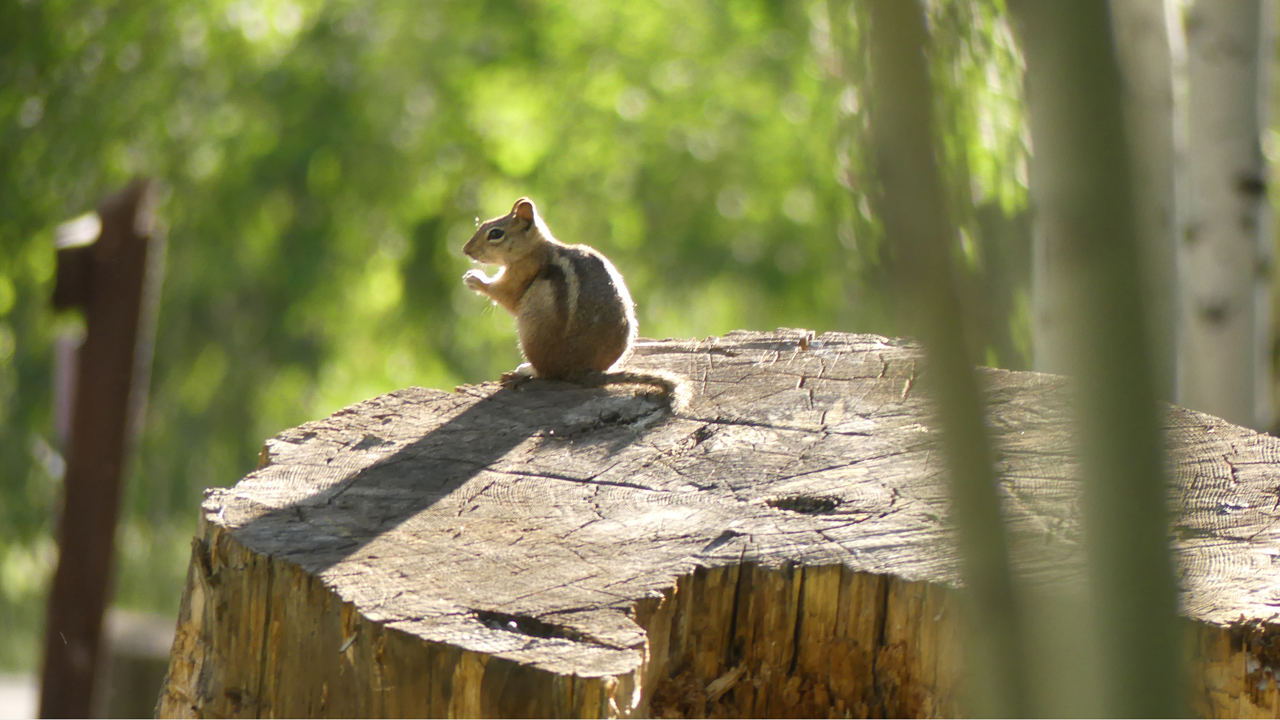 I would call these "chipmunks", but I believe they are actually Golden-Mantled Ground Squirrels. 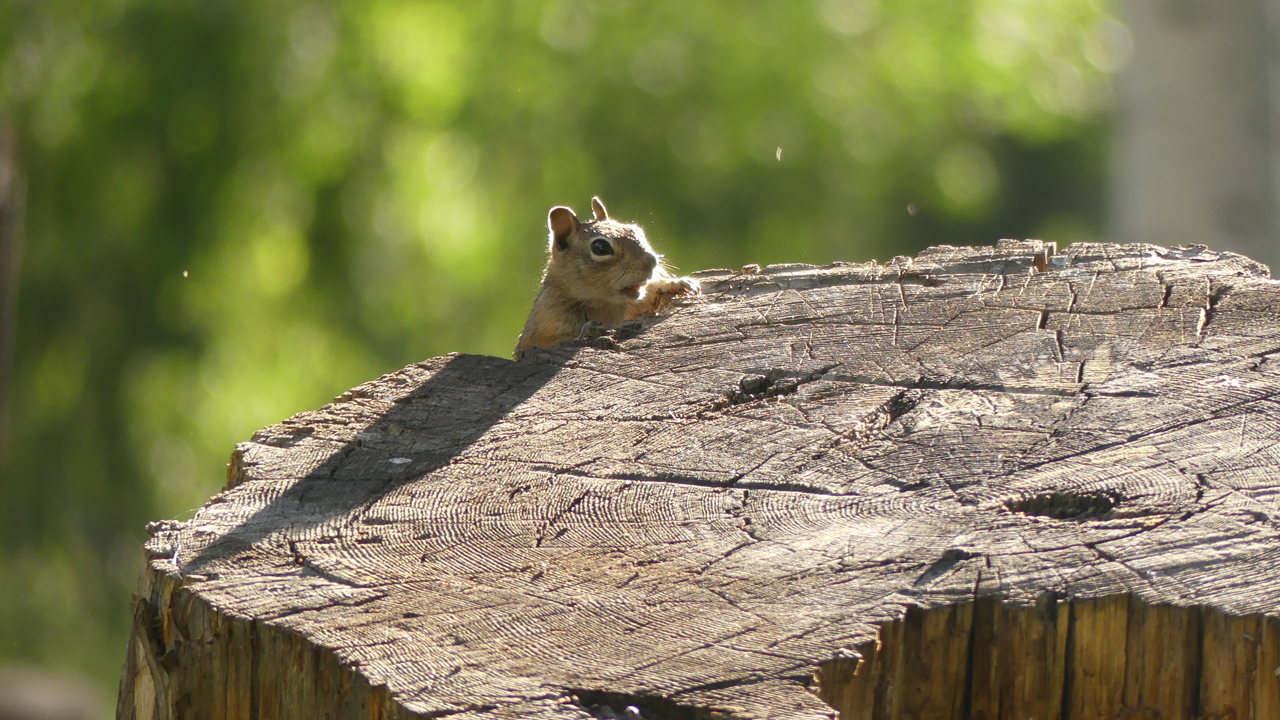 This one ducked behind the stump for safety, but still hung around to see if we might be carrying snacks.

With rain in the forecast for the weekend, we figured this was our last chance for a major hike. Two years ago, we hiked the East Baldy Trail. This time, we opted for West Baldy. 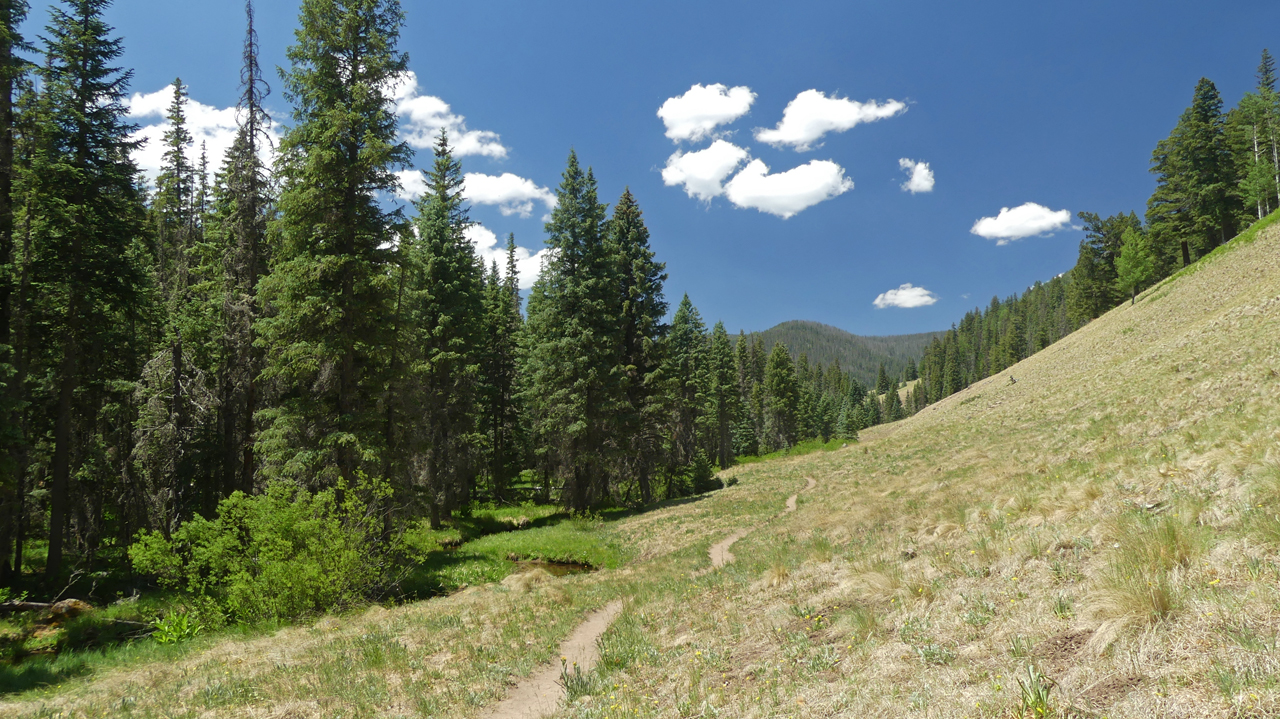 West Baldy — the "West" referring to the west fork of the Little Colorado River — is surely one of the Southwest's finest hikes. It's also very popular. We met at least 30 backpackers heading up on our way out. East Baldy is steeper and more shaded, but West Baldy stays close to the creek, and the summer wildflowers were dazzling! 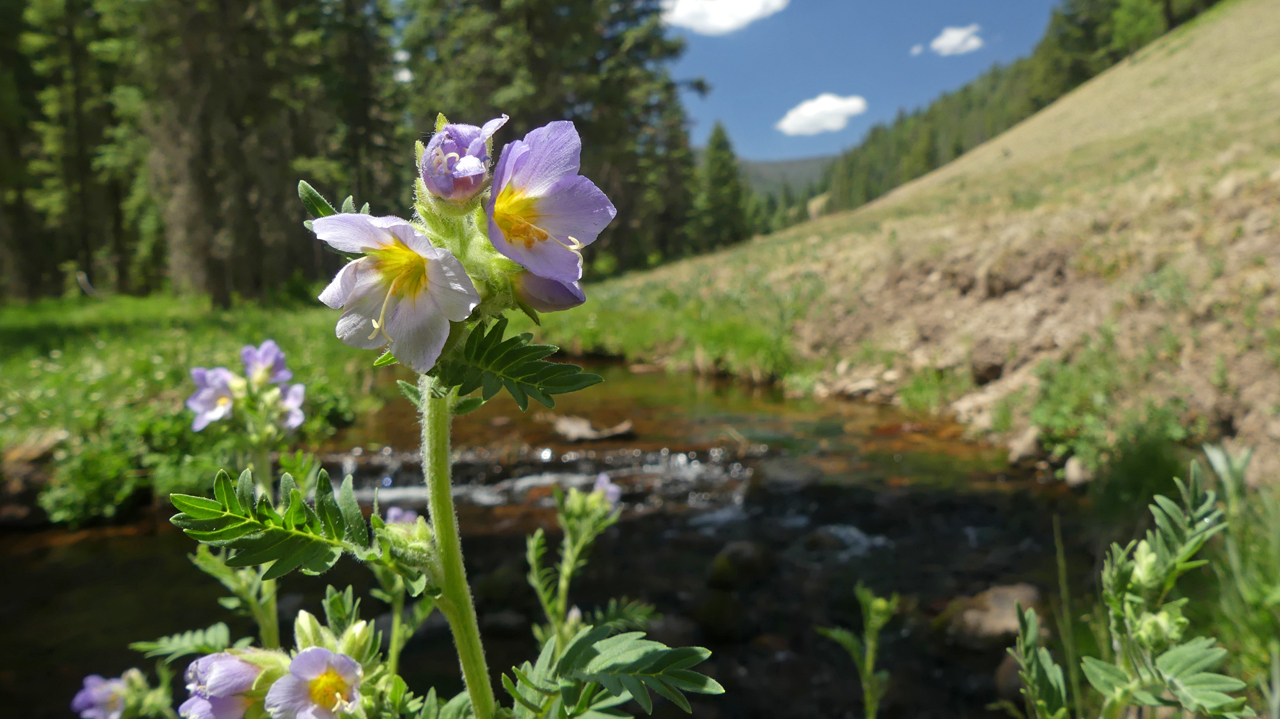 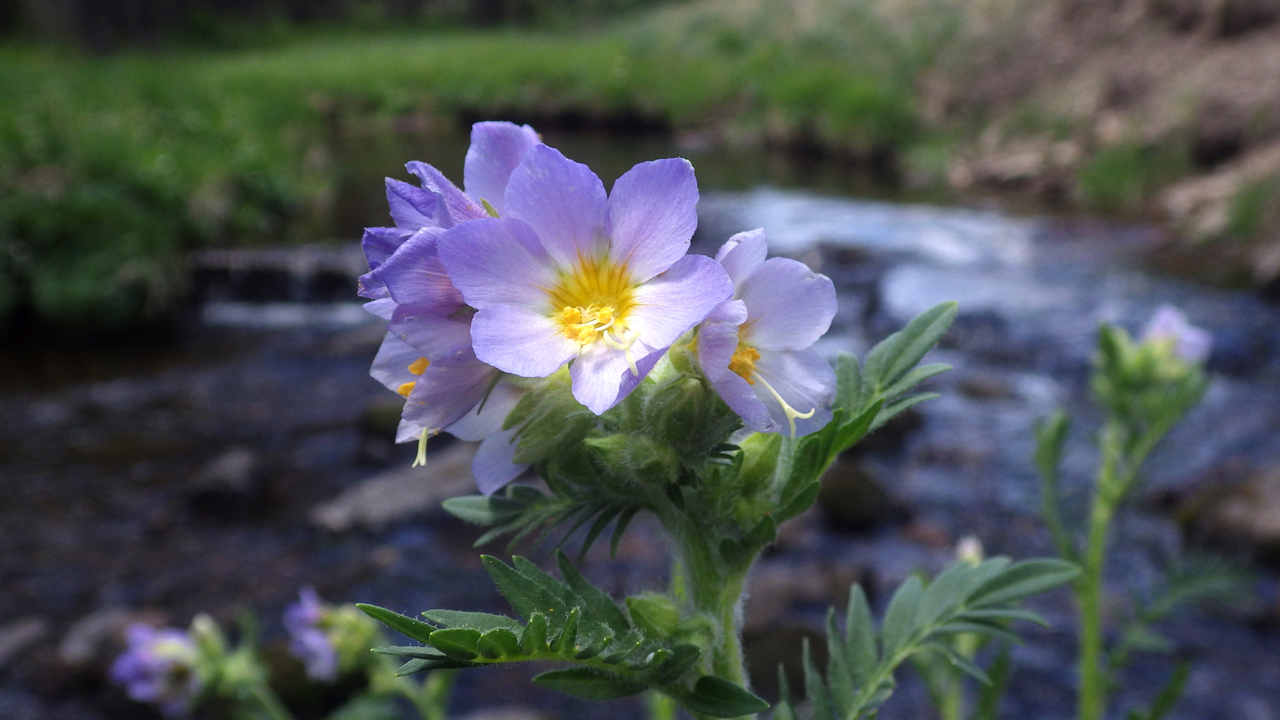 So lovely! Here it is again from a different angle. 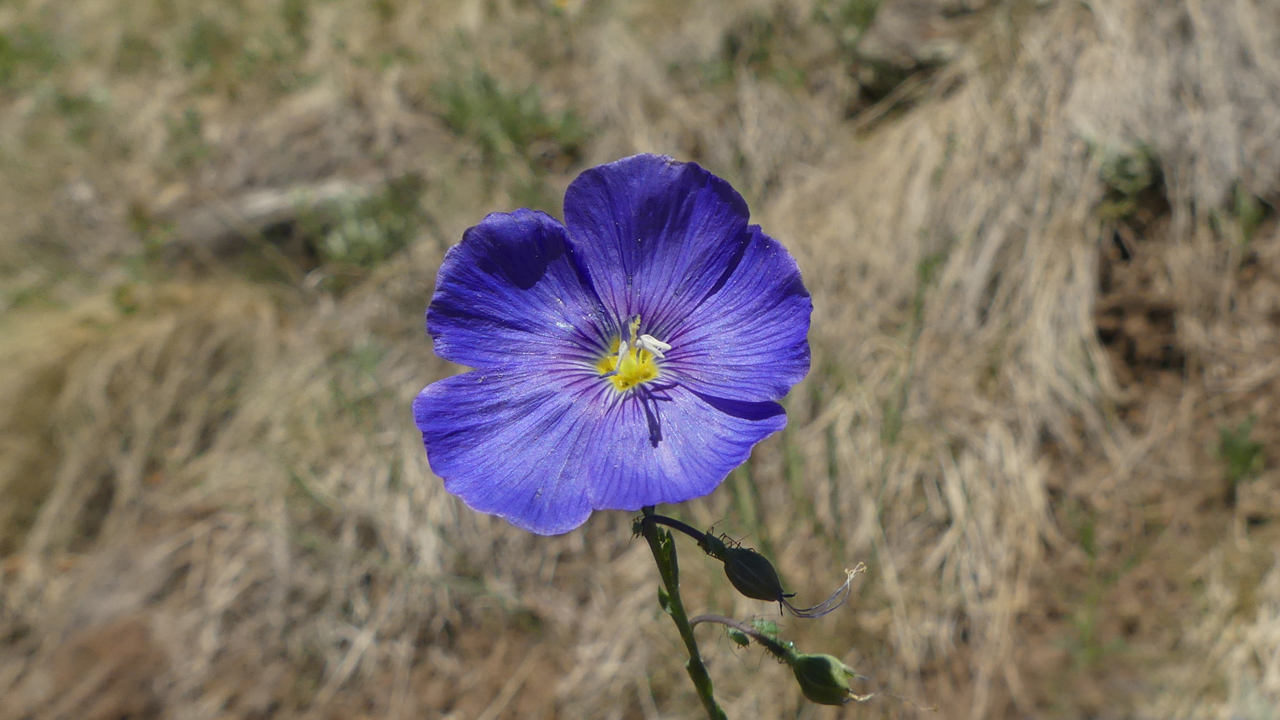 Lewis Flax again, but a much darker shade of blue. 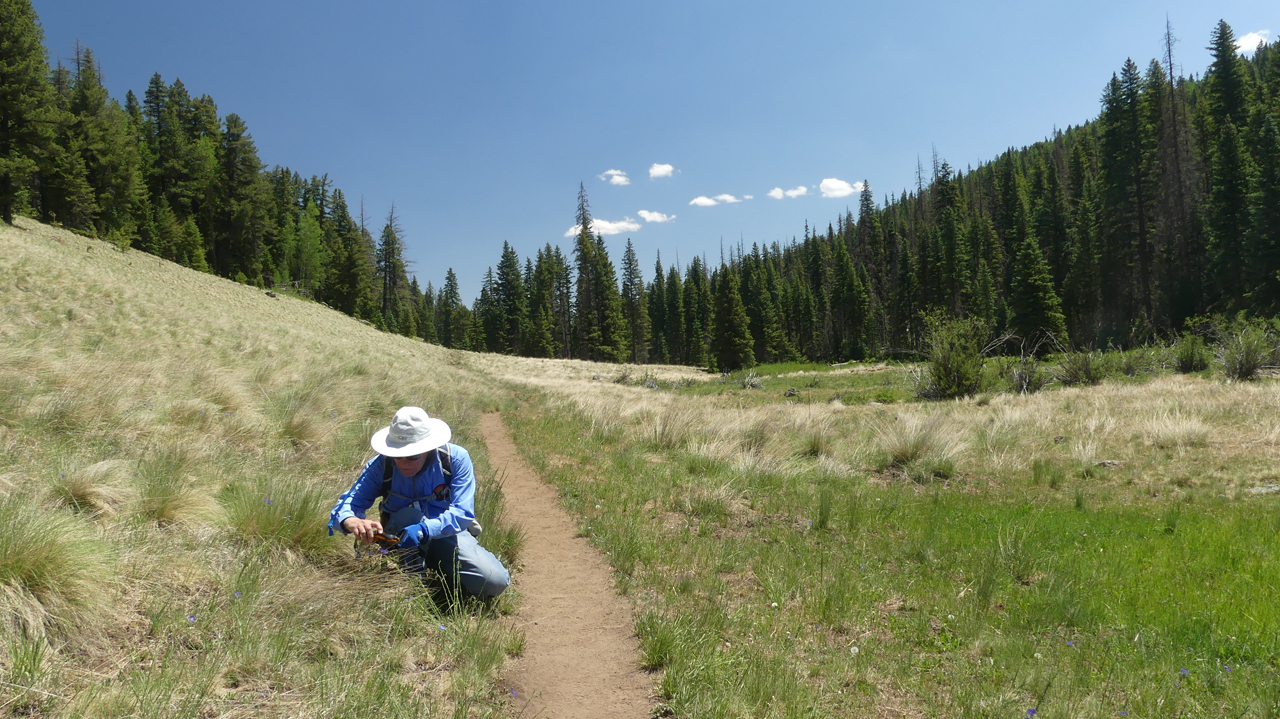 Our mph was severely reduced with so many wildflowers to photograph! 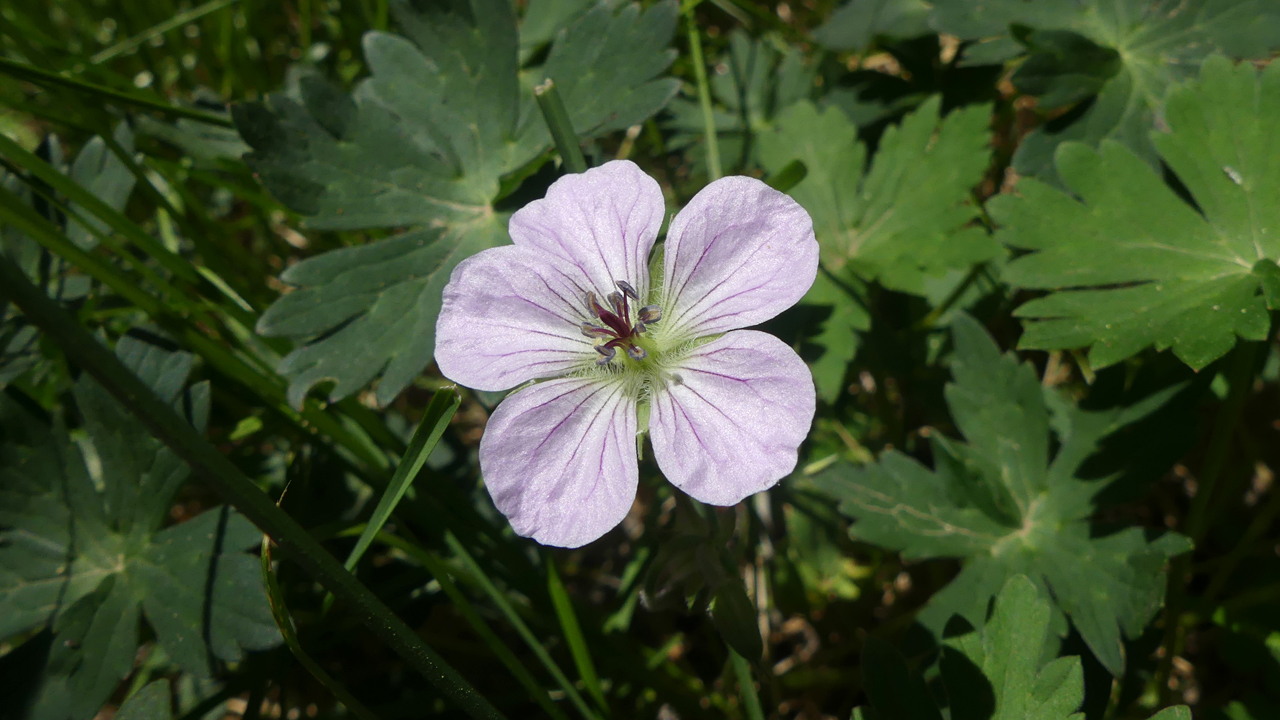 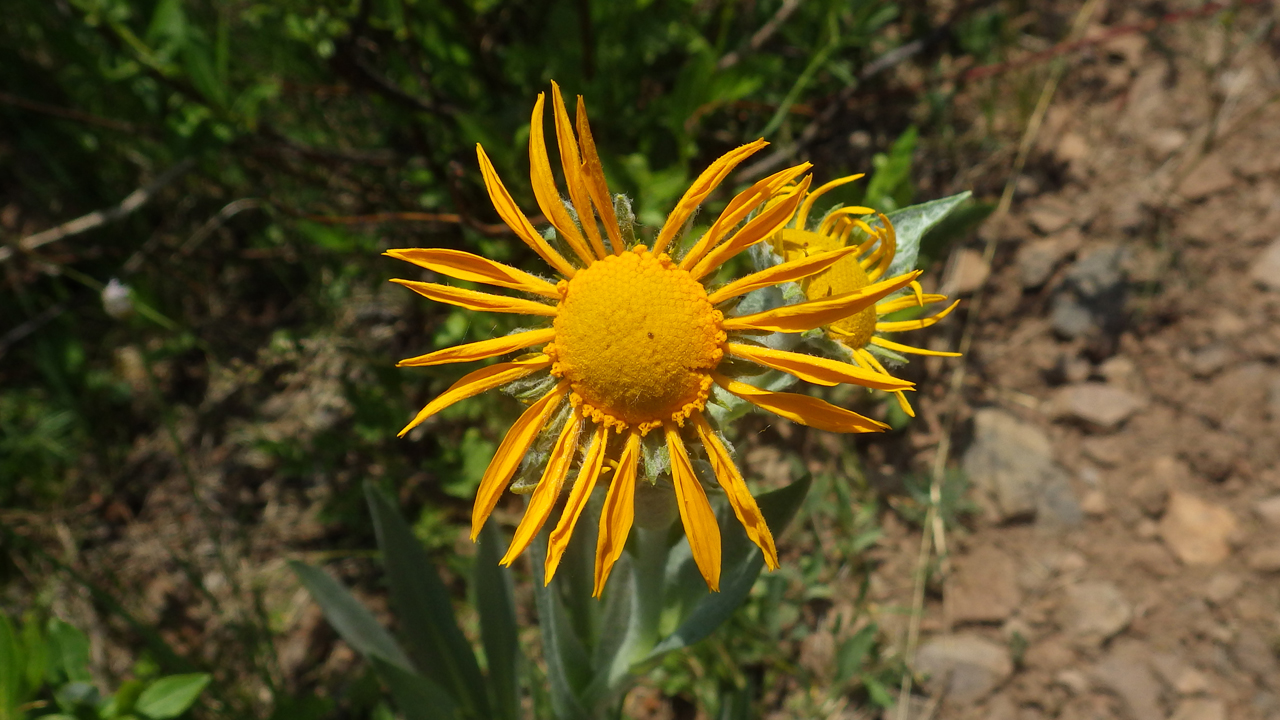 Had to scramble down the bank to photograph this one. Owl's Claw. 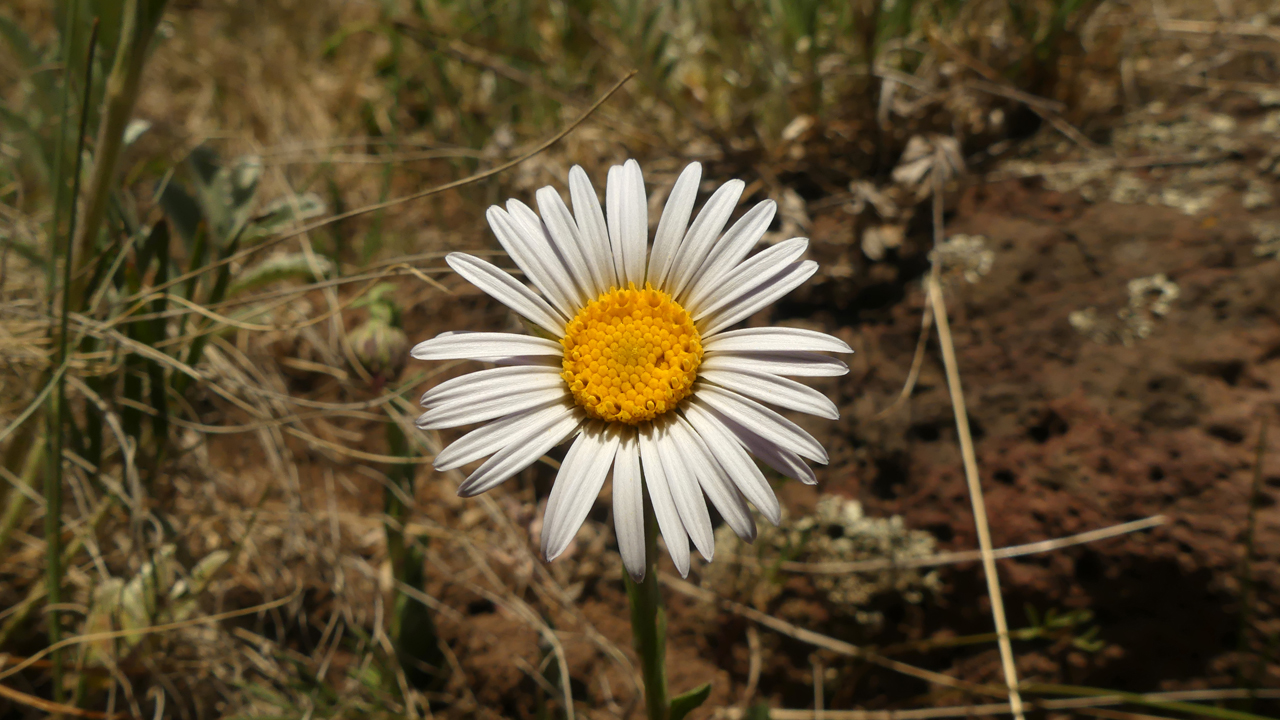 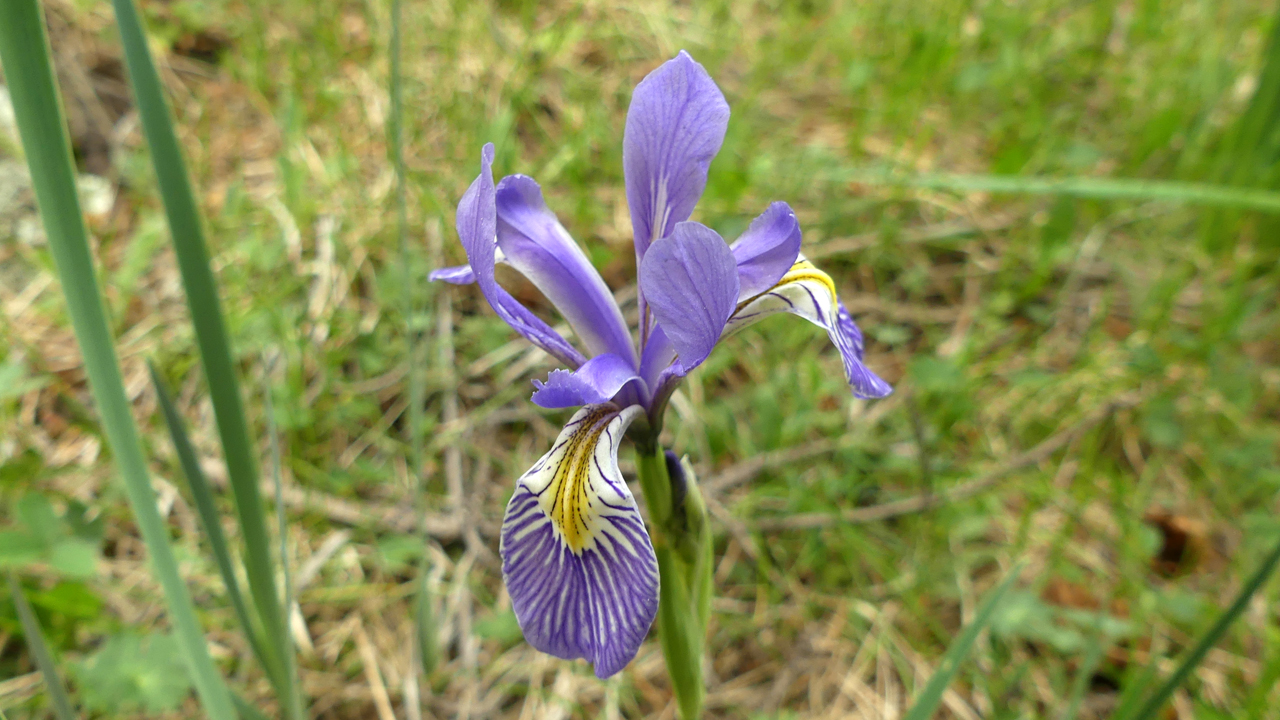 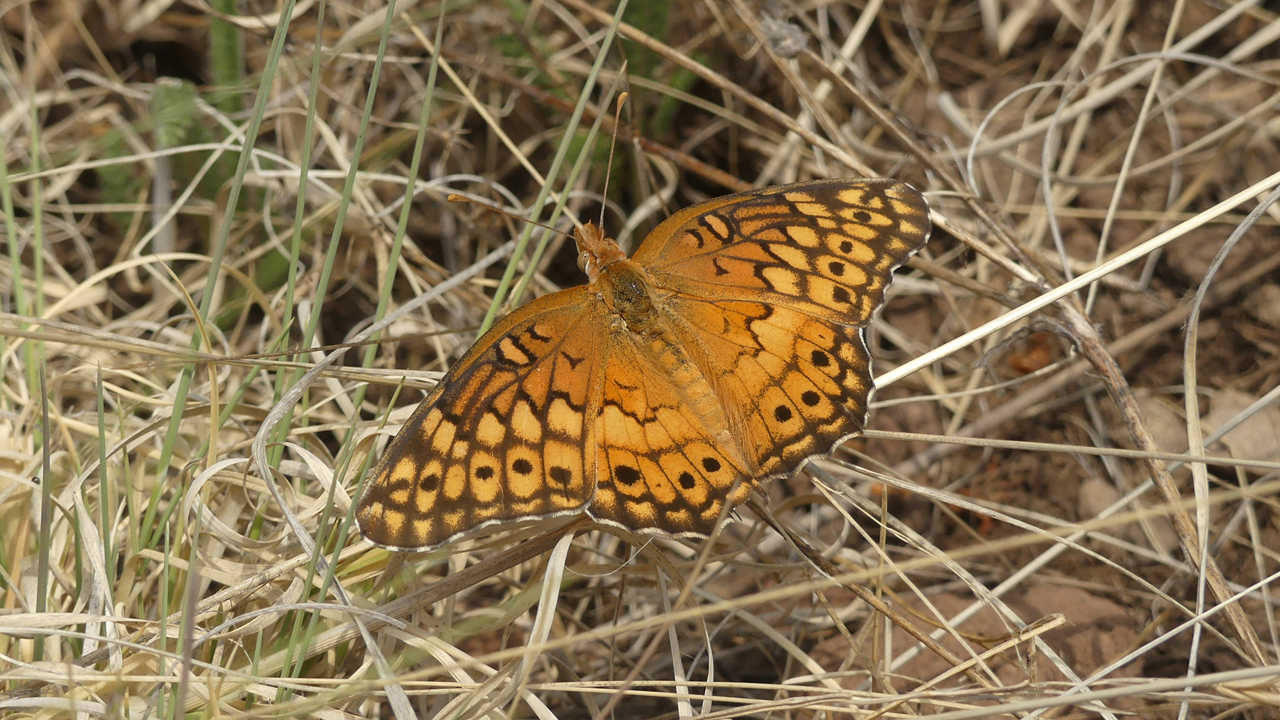 Variegated Fritillary. There were more varieties of butterflies than we could count, but most of them wouldn't agree to pose for a photo. 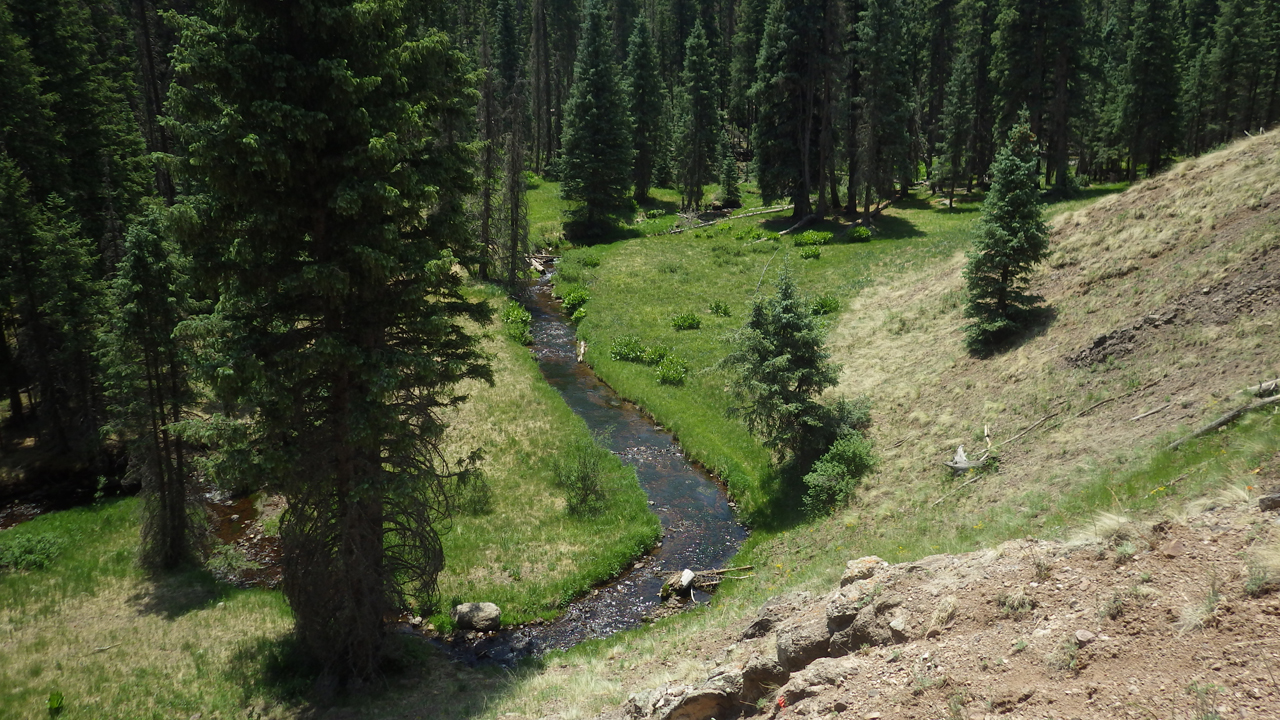 About three miles out, the trail begins climbing away from the river. With dark clouds boiling overhead, we decided it was time to turn back. 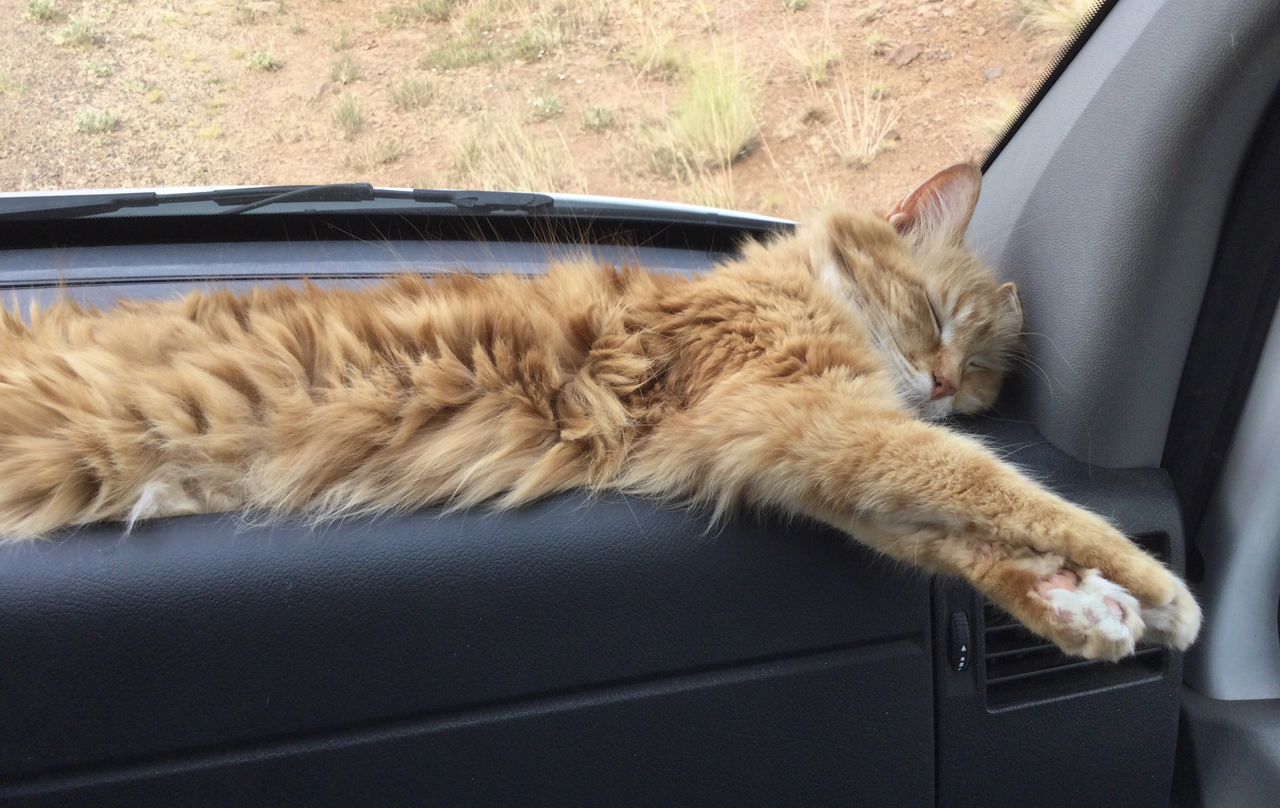 Madeleine was exhausted from her humans' hike!

We had time for a short hike the following morning, returning to camp just as the rain began to fall in earnest.

This is what we came for. 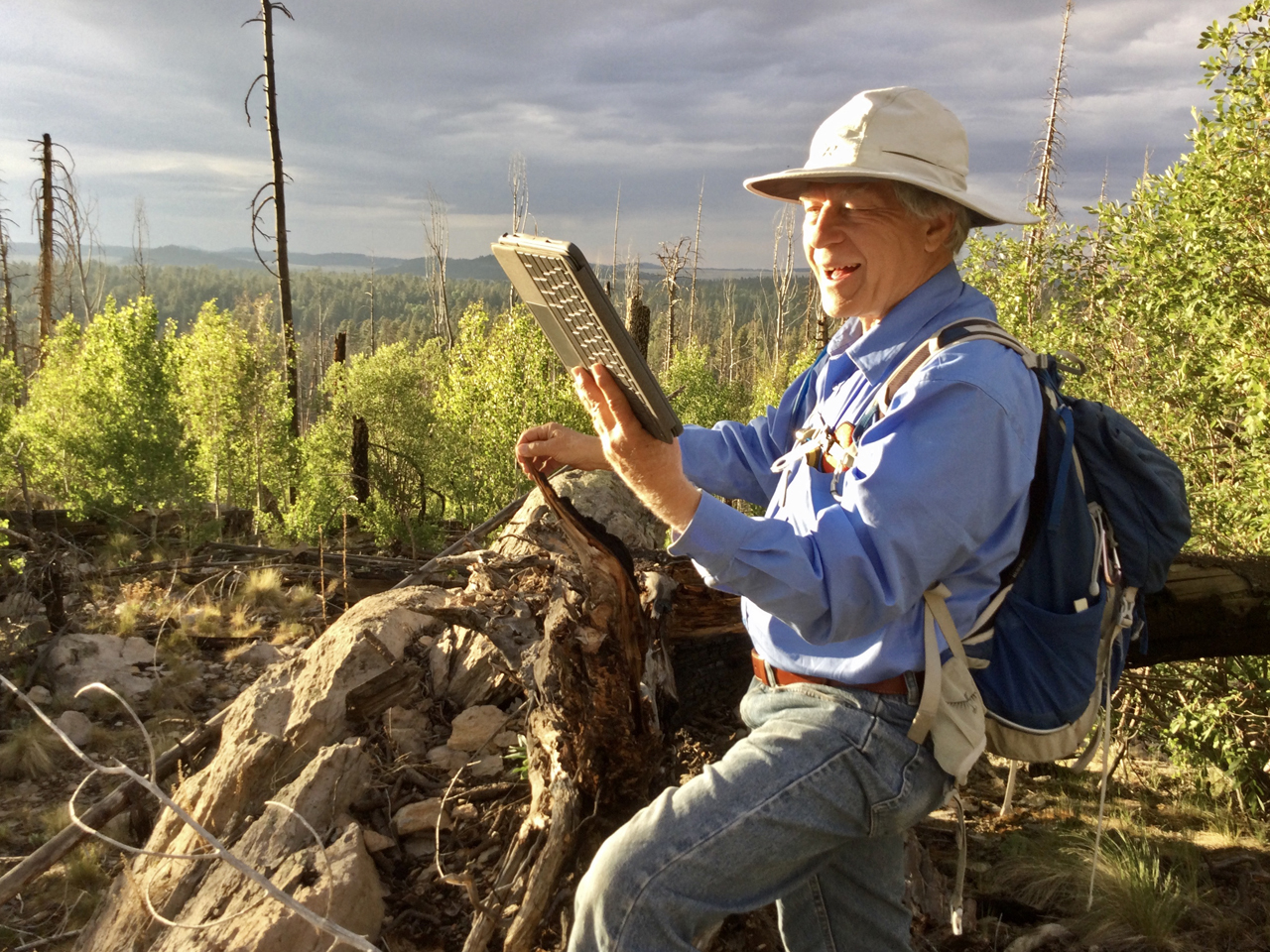 After the storm, we returned to Big Lake Knoll in search of a cell signal. This is Dennis and me "bar-hopping". 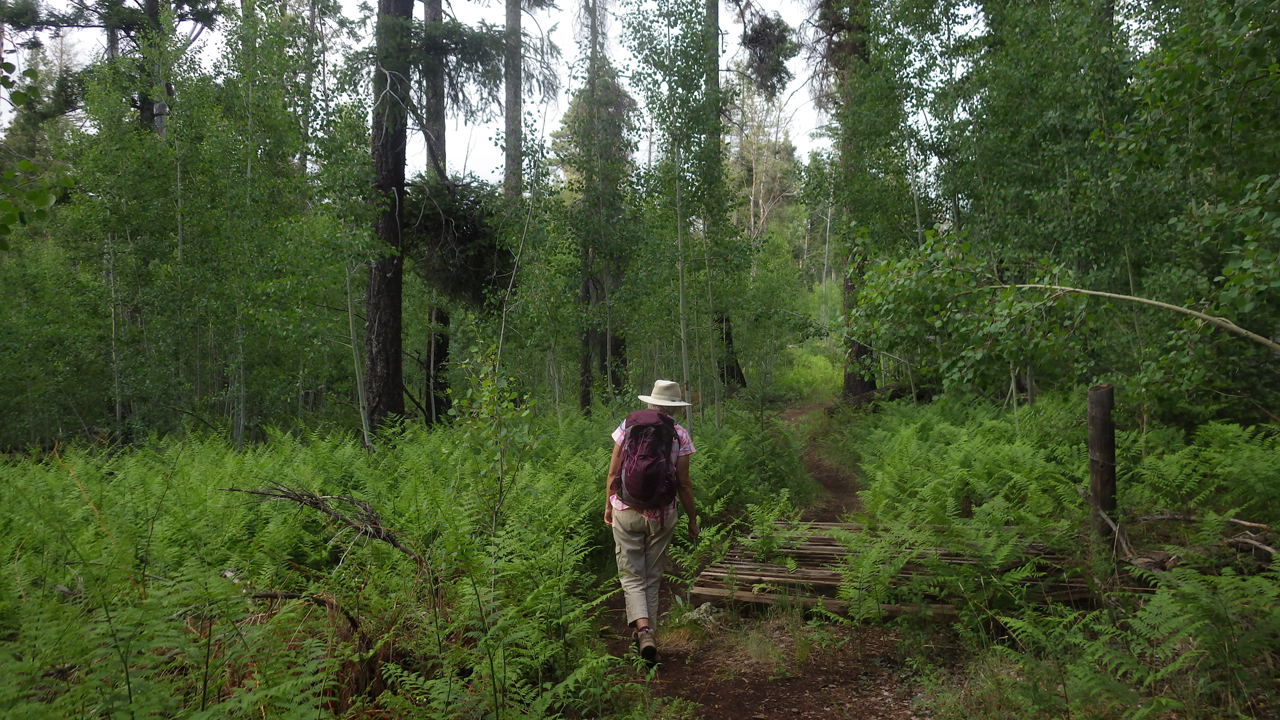 Walking through waist-high ferns in a forest that is recovering nicely from the Wallow Fire.

By Friday evening, the campground, which had been delightfully quiet, was filling up with weekenders and their shrieking rug rats, barking dogs and ubiquitous propane fire pits. Feeling a bit hemmed in, and with a forecast calling for severe thunderstorms, we abandoned our campsite and headed north into the high country between Big Lake and Springerville. 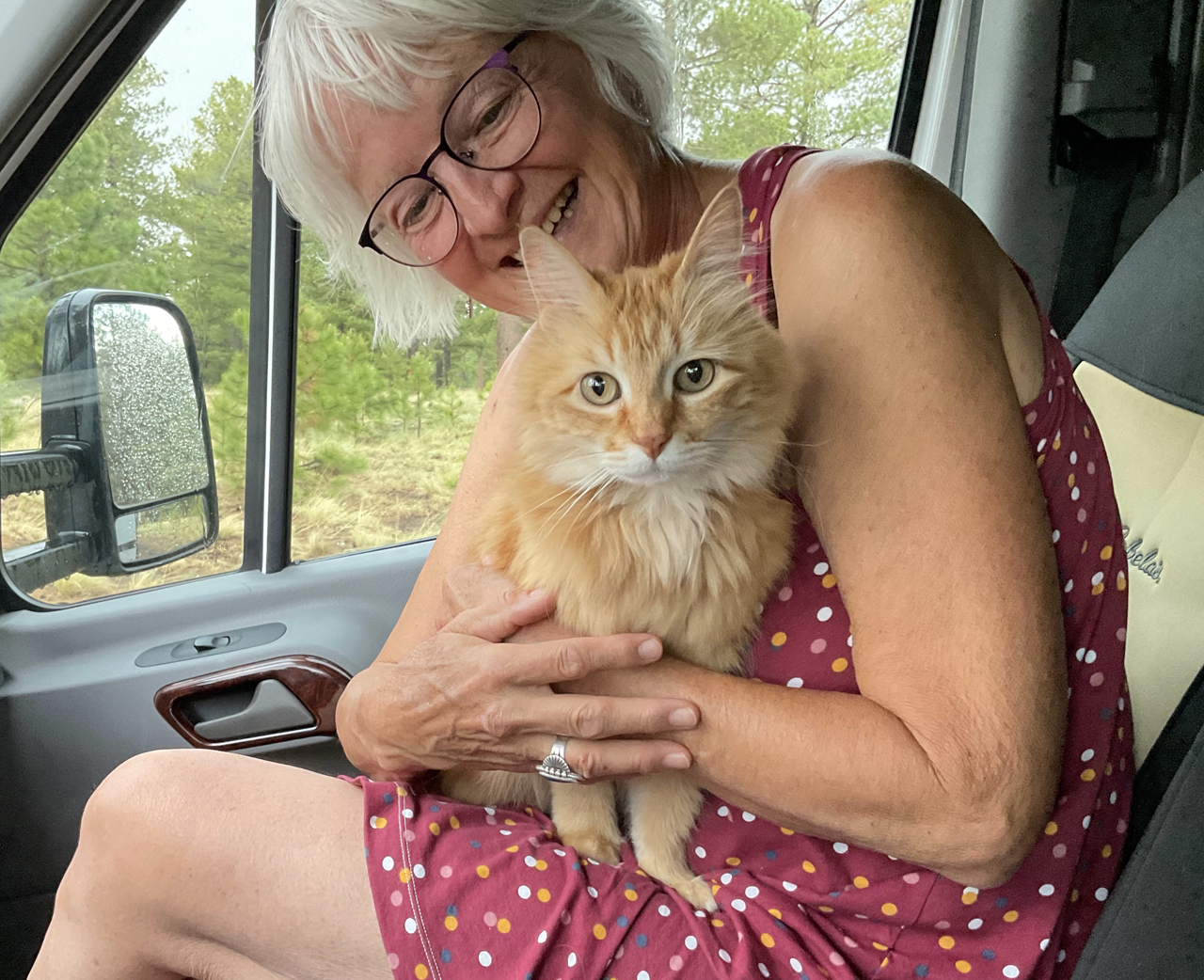 Having determined that we should make an annual trip to this area each June, we used the day to do a systematic exploration of side roads in search of good dispersed camping, finally settling for an isolated site atop a knoll at 9340'. 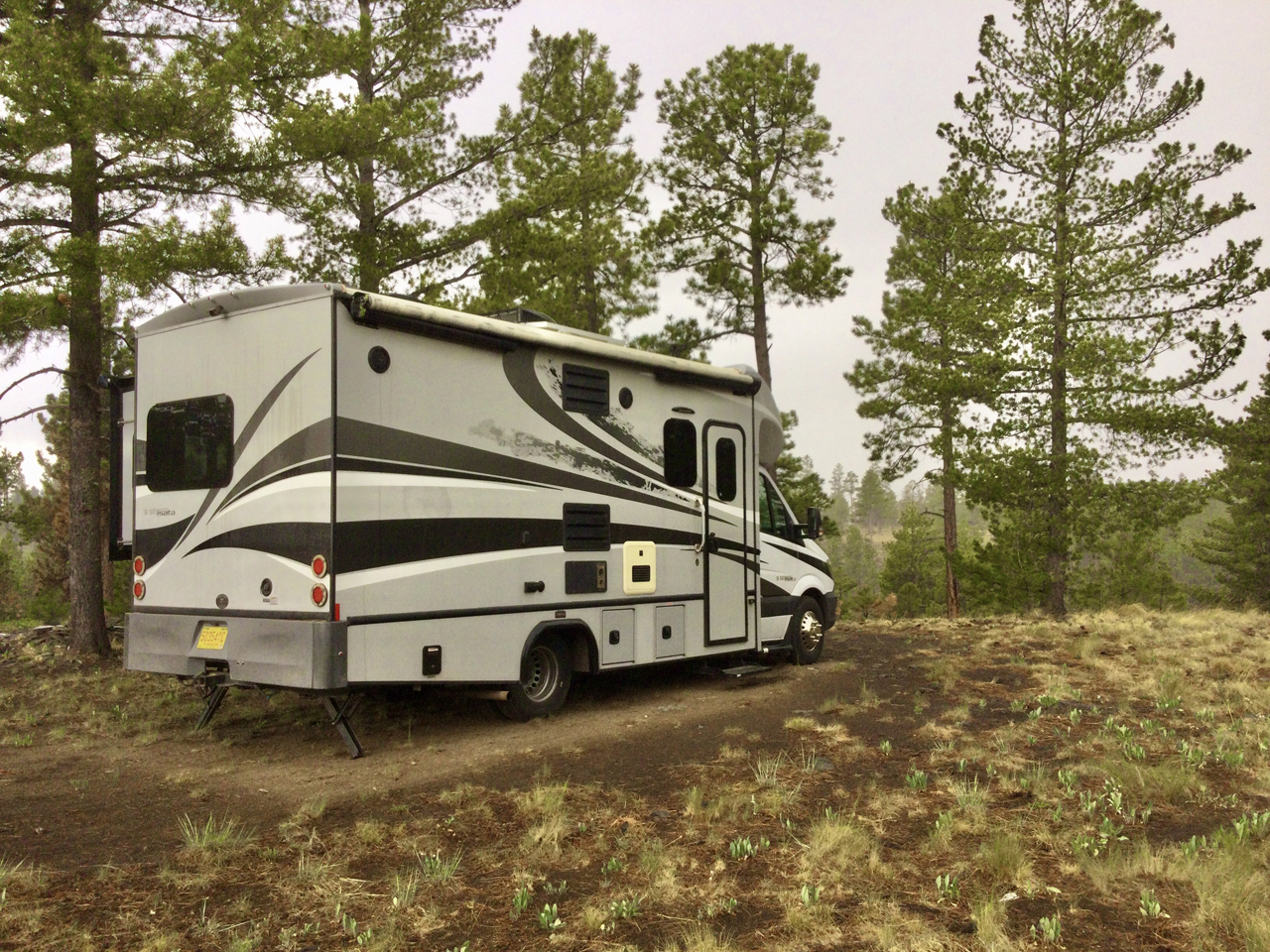 It was certainly the boondockiest night of the trip. We were miles from any other campers. High winds and rolling thunder buffeted the RV all night long, and the temperature plunged into the 40s. We slept in our clothes to stay warm, the cats firmly glued to our sides.

We awoke to 60 degrees and spitting rain. Well, we came here to cool off. Mission accomplished. It was time to go home.