As often happens, Summer gave way rather abruptly to late Fall. I was hoping to spend some time hiking in the golden aspens before it was too late. So on a Thursday afternoon we packed up the camper and headed for Escudilla Mountain. Arizona's third loftiest peak had been on my radar for nearly two decades, but it was a very long drive from Tucson. And then the Wallow Fire swept through the area in 2011, incinerating more than 500,000 acres, and we delayed another decade. 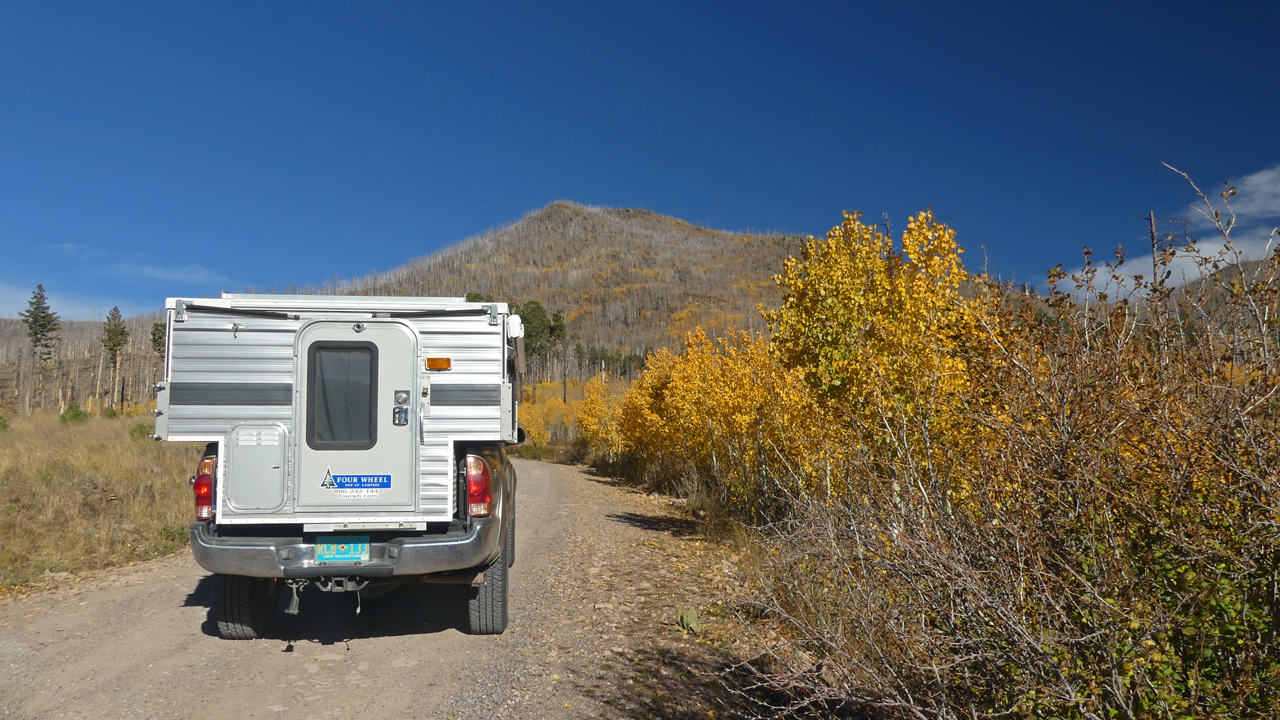 "Escudilla" means "bowl" in Spanish. Arizona's third loftiest peak is an odd loaf of a mountain, about 5 miles long by 3 miles wide. It comprises more than a dozen peaks in the 9700 to 11,000-foot range, surrounding a long bowl-shaped meadow. 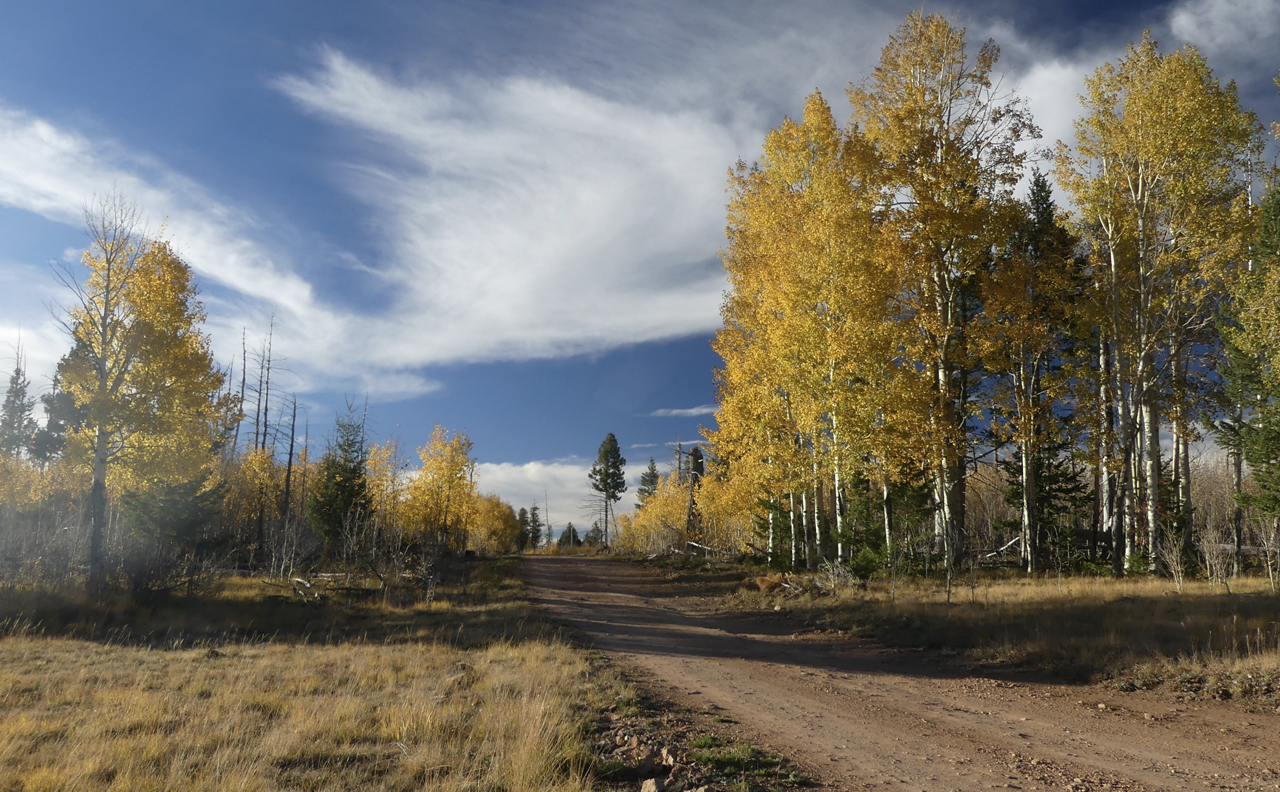 We drove the rough but very scenic loop road around Terry Flat — the wrong way, as it turns out.

But we eventually located the perfect campsite at 9800 feet, in an aspen grove next to 1500' cliff. 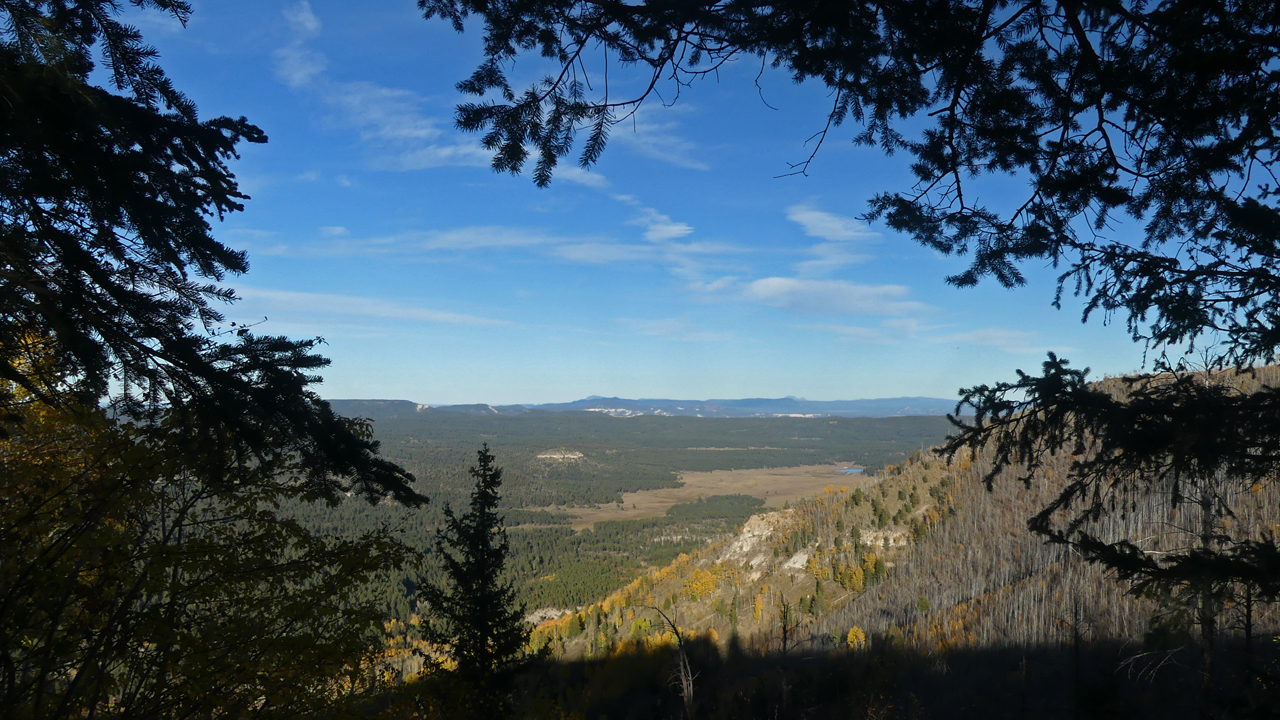 There were awe-inspiring views of ELC Flat and the Mogollon Mountains to the east. 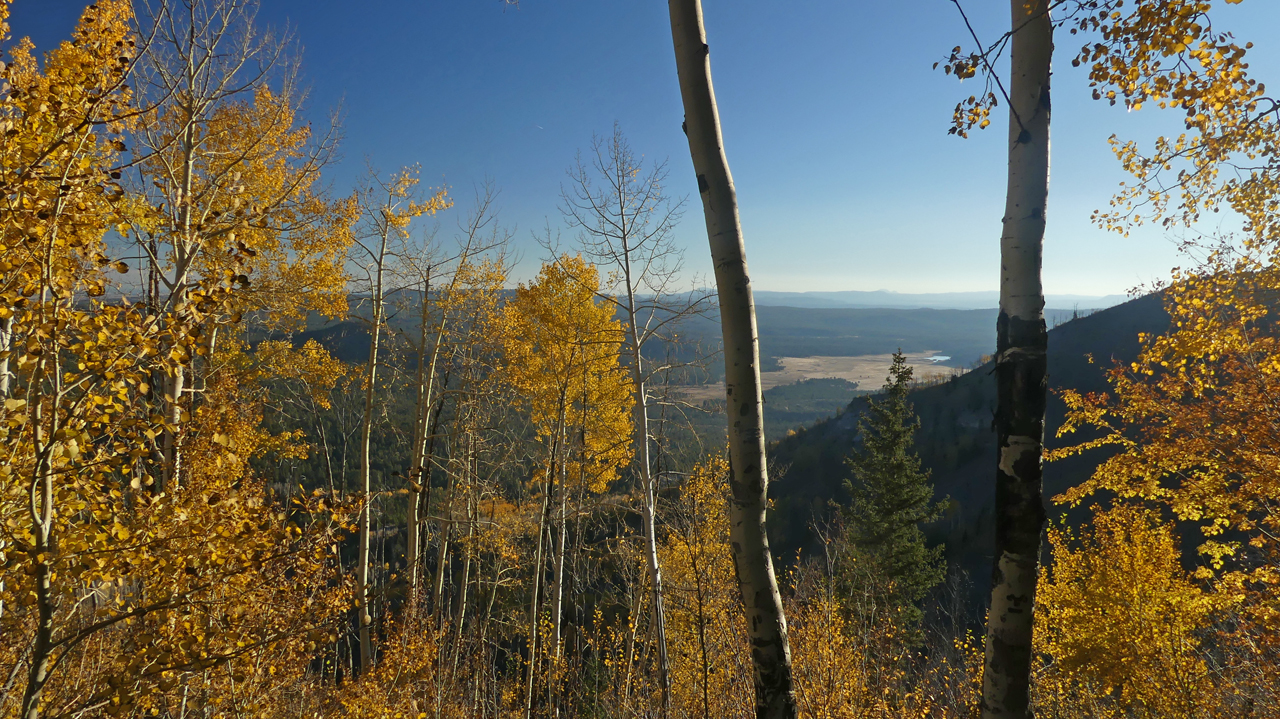 It was a bitterly cold night, and relentless winds tossed the camper like a cork on the open ocean. 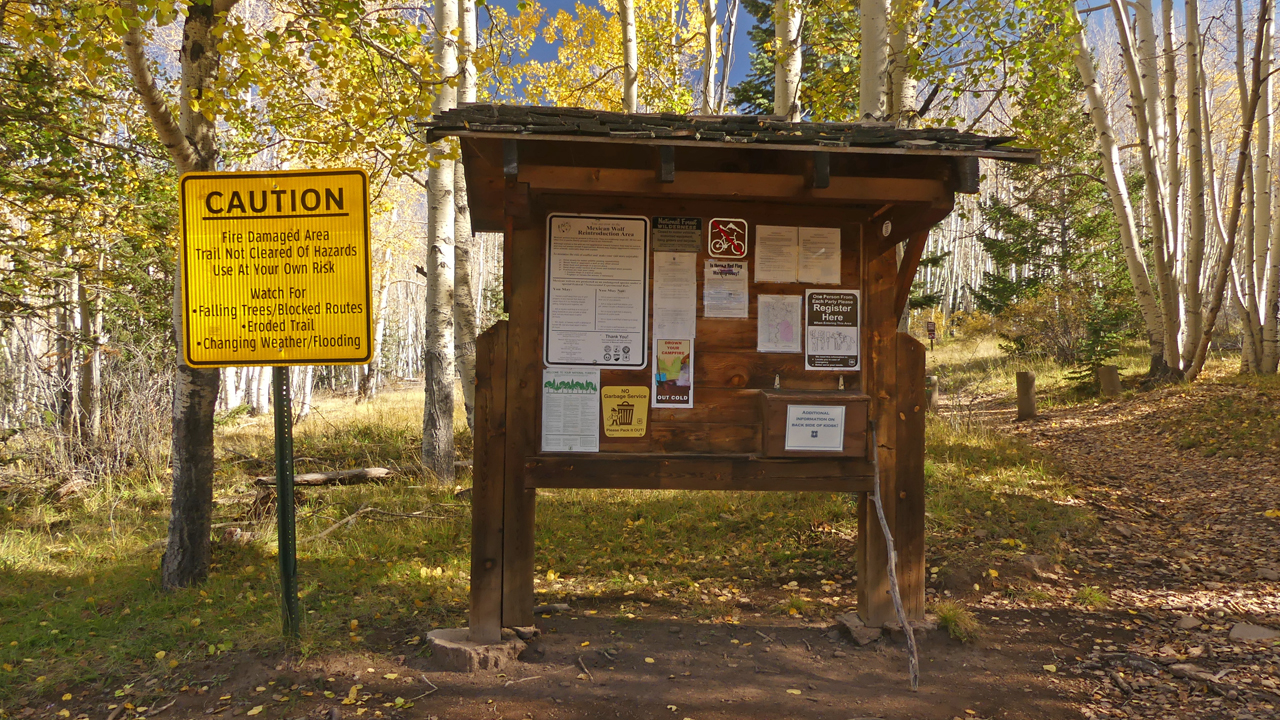 We thought we'd have to cancel our hike, but the wind eased up at dawn, and the sun transformed a blustery night into the perfect Fall day. Vigorous young aspens have established an impressive toehold on the charred slopes of Escudilla Mountain.

We came for the Fall foliage. We were not disappointed. 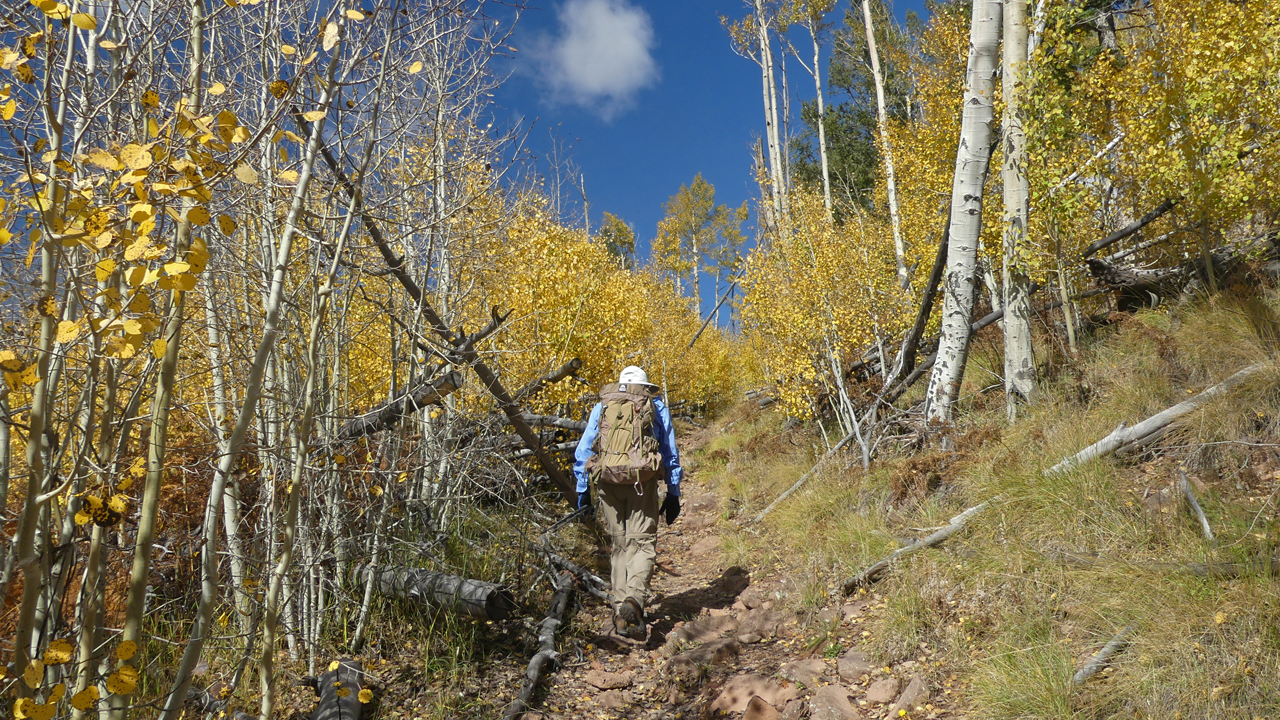 Climbing into the luminous young aspens. 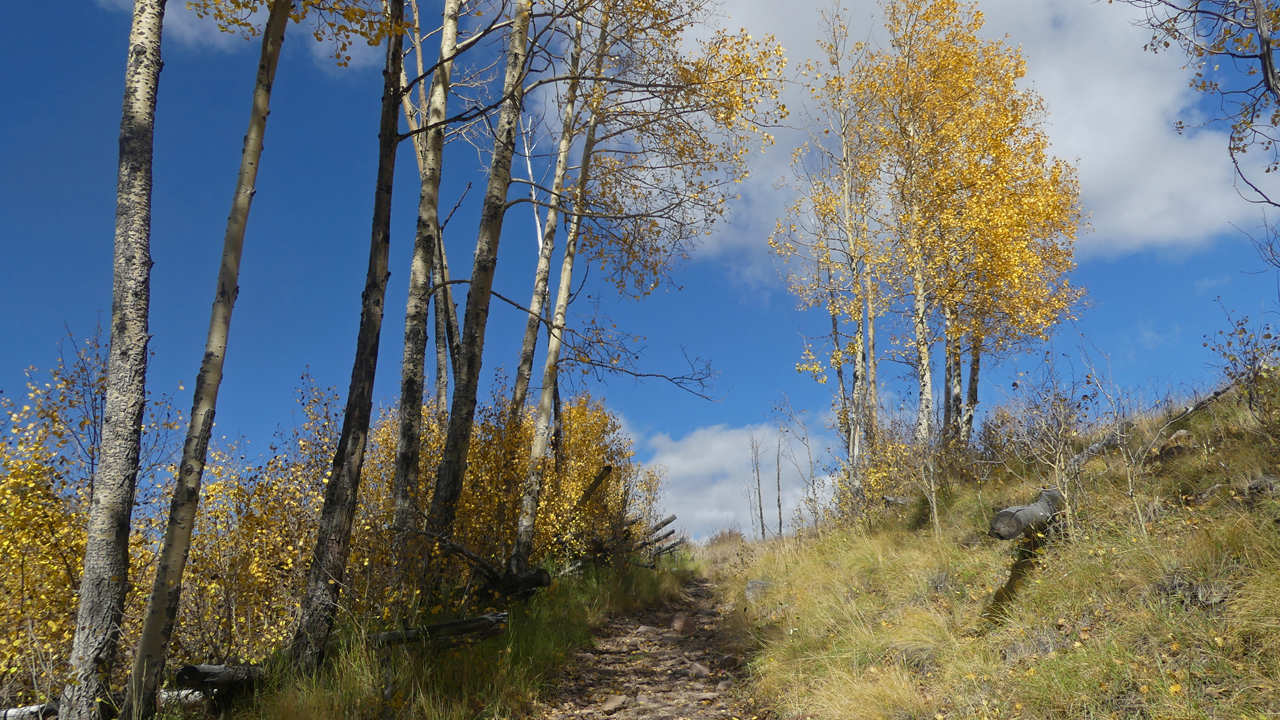 A final clutch of aspens before we emerge onto a vast alpine meadow. 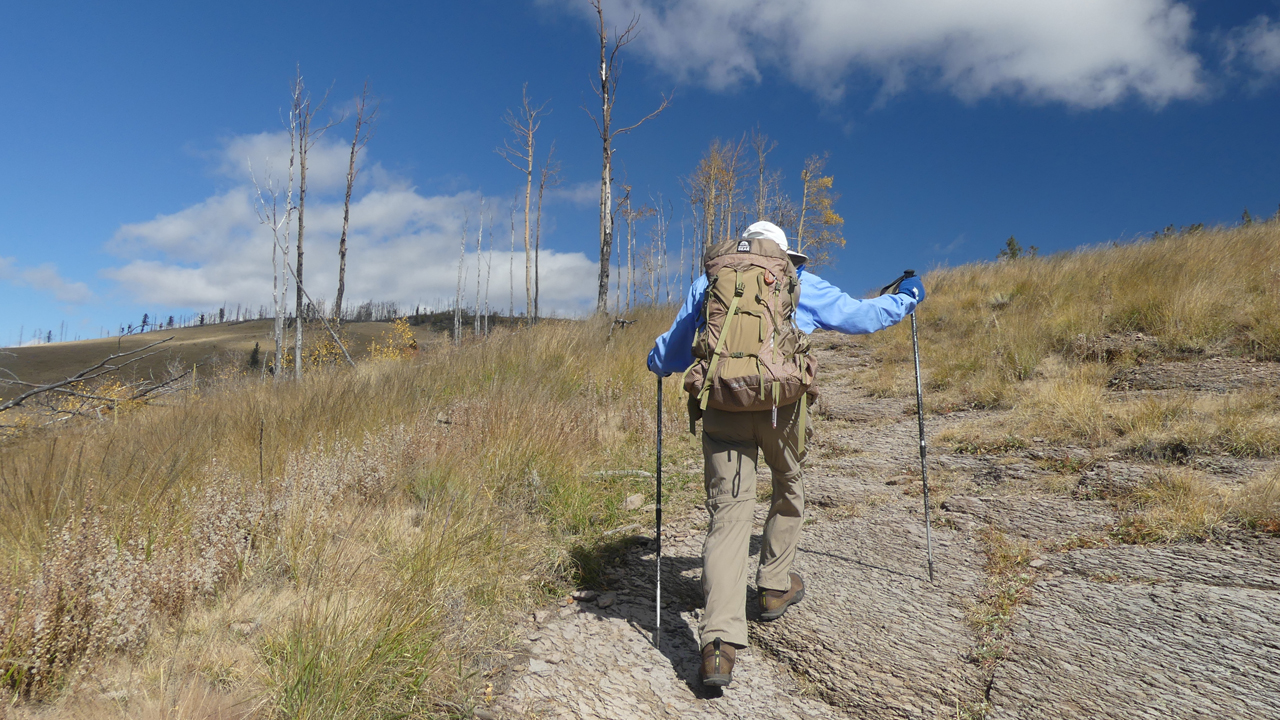 Topping the first of two ridges. 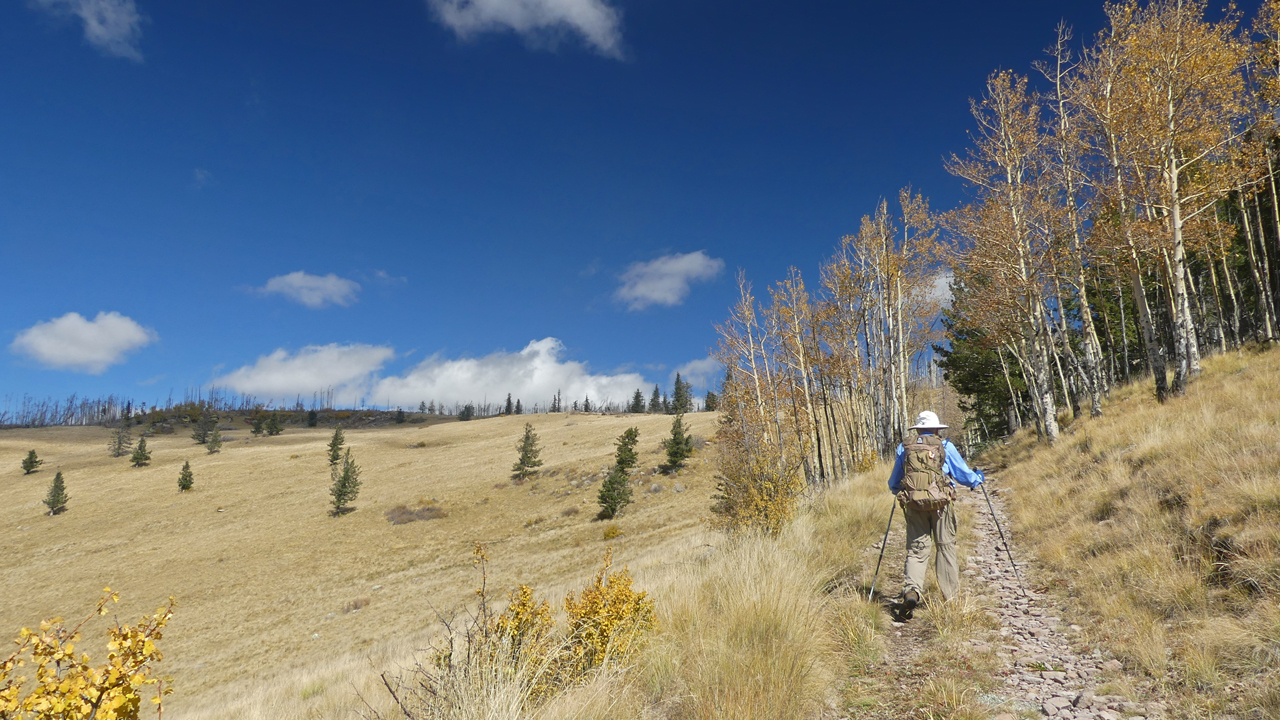 This was the prettiest part of the hike! 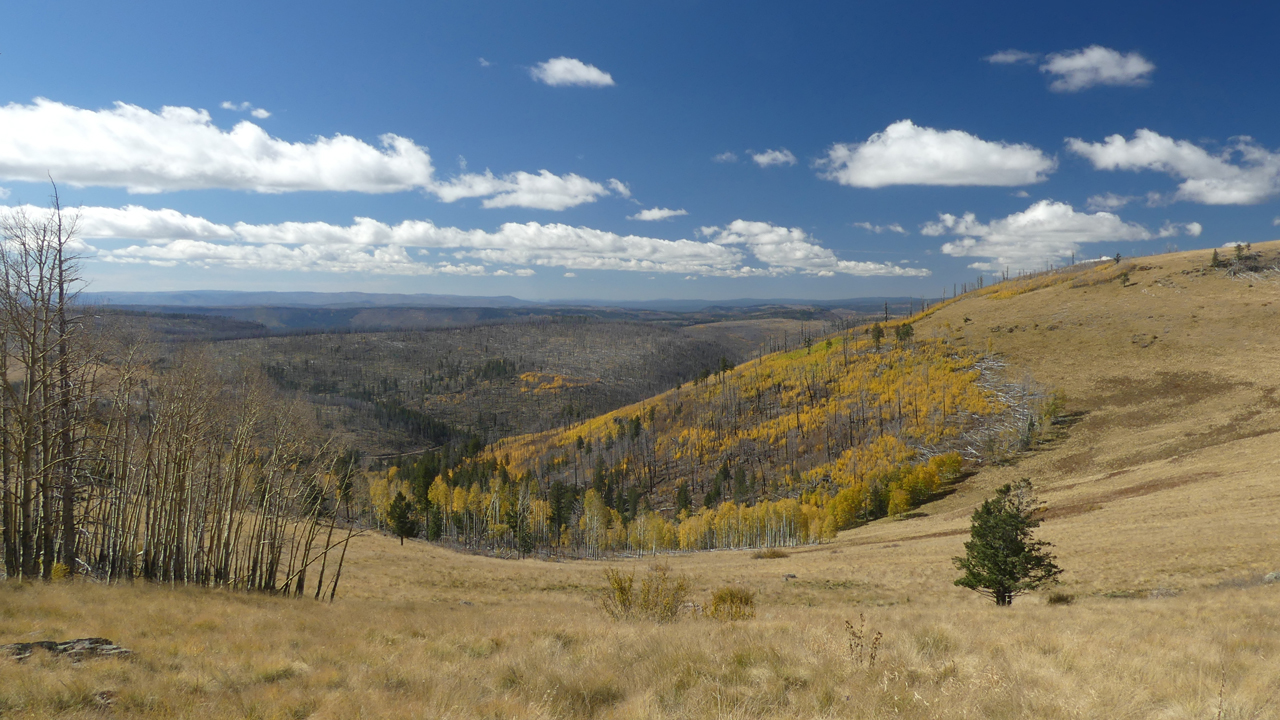 Looking down into a particularly colorful bowl full of mixed aspens and Douglas fir. 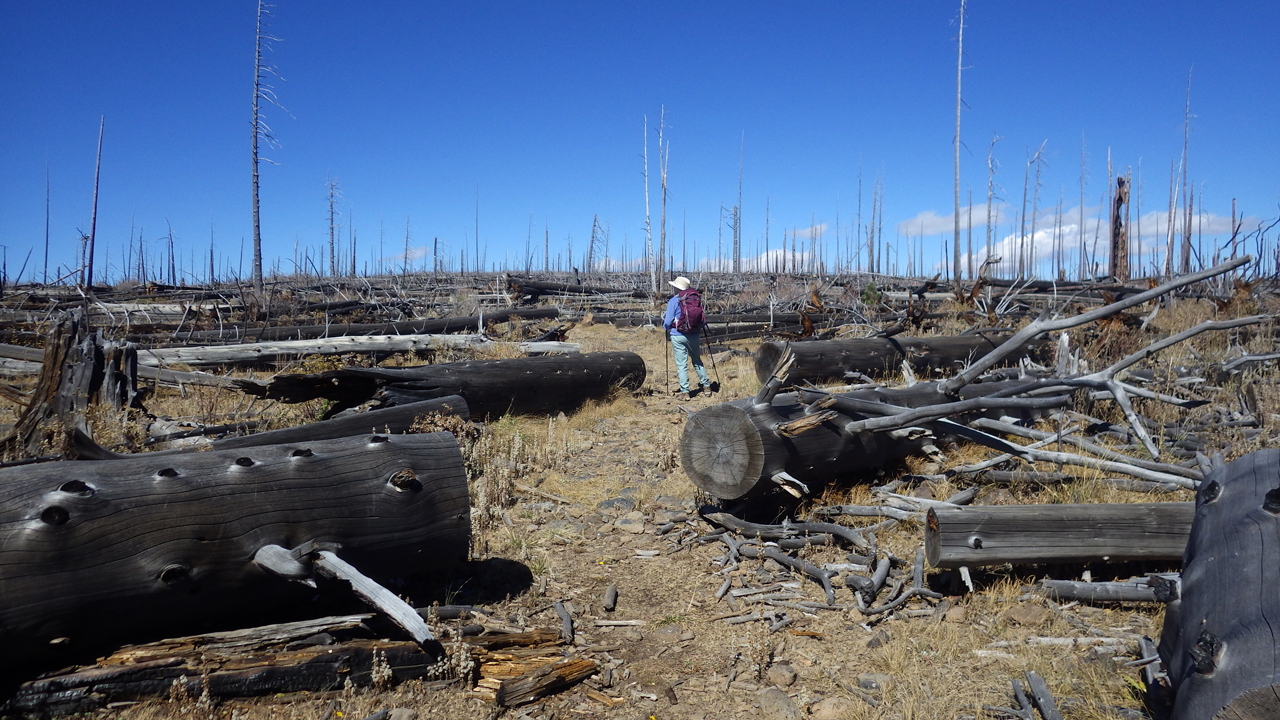 After the second climb, we dropped into a saddle where there was nothing but a tumble of matchsticks, as far as the eye could see. 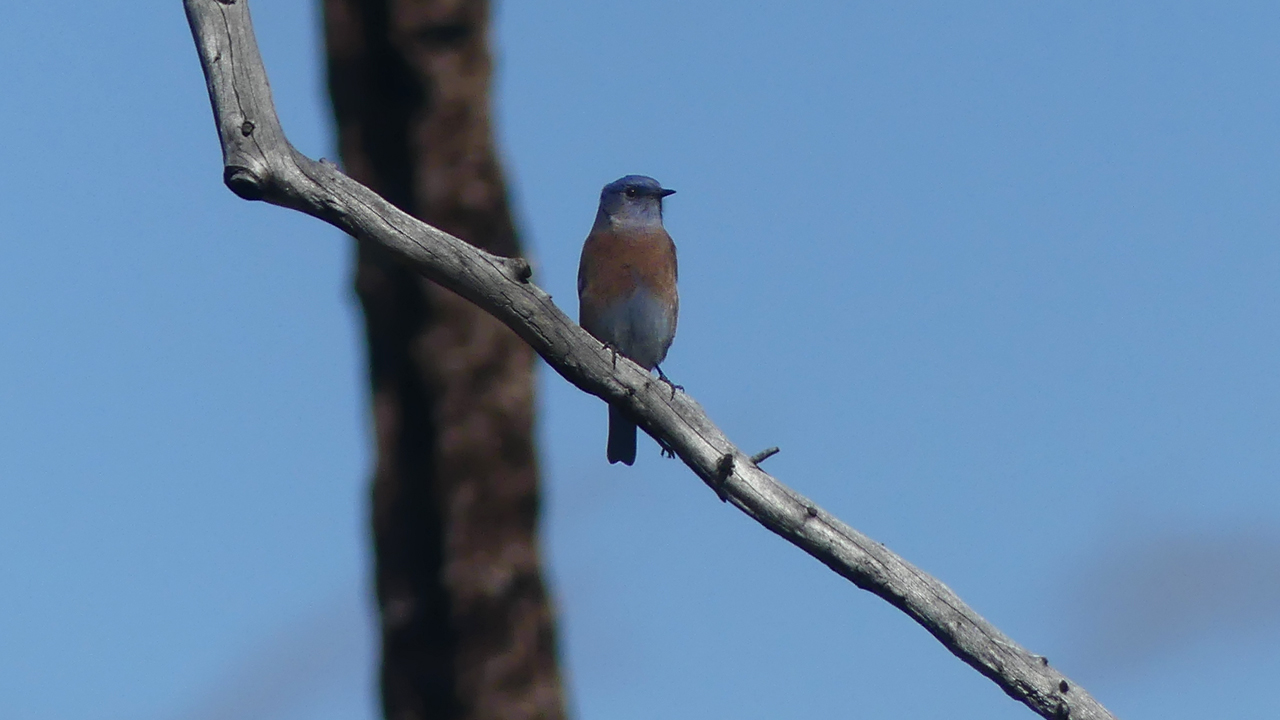 There was nevertheless a lot of bird life here, especially Western Bluebirds. I wondered what they could find to eat in that flash-fried forest, but apparently ⅔ of their diet is insects, and I'm sure there are lots of bugs in those downed logs!

Looking west toward the White Mountains. 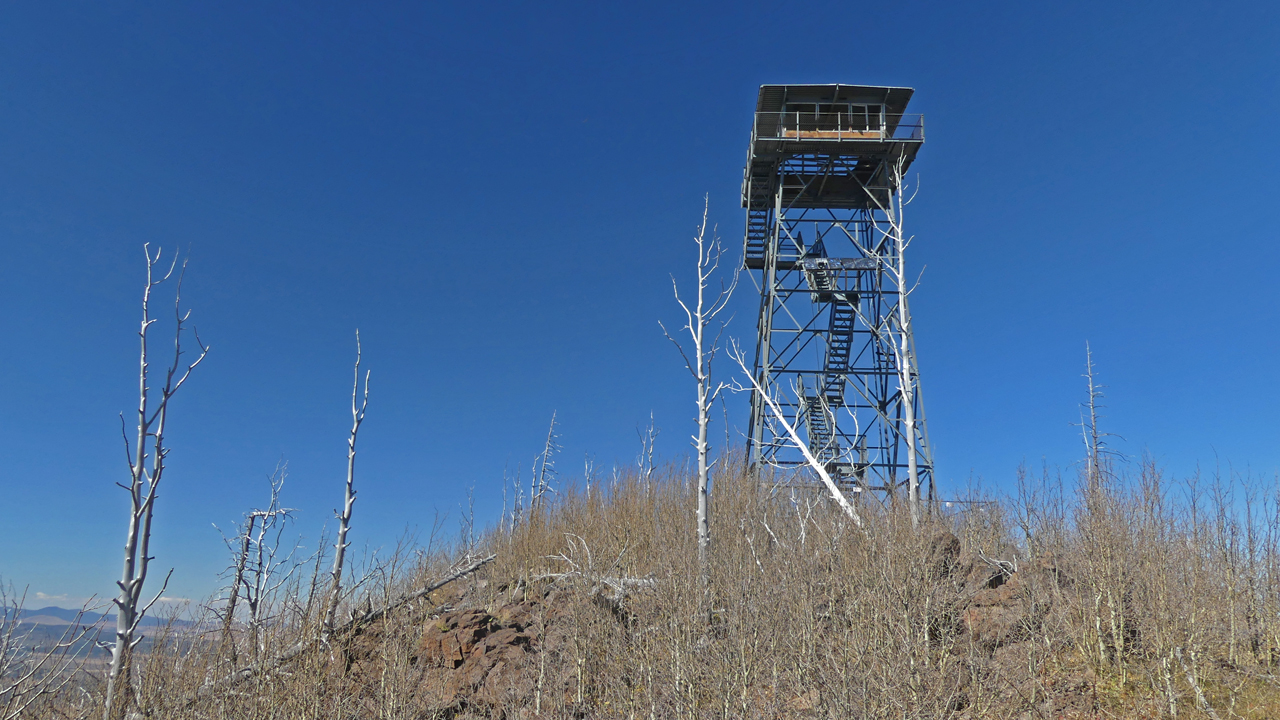 Like everything around it, the fire tower was incinerated by the Wallow Fire. The metal structure remains, but the floor is gone, the solar panel is shattered and hanging by a thread, and the wind howls and moans through the tower even louder than it does in the silver skeleton forest below. We thought we'd treat ourselves to a nice meal in Alpine, but I think we just stumbled onto the set for "Virgin River." This restaurant is only open 3 nights/week and every table is reserved well in advance by the regulars. "Not from around here, are you?"

All day we hoped we would see elk, and here they are right next to our camp near the AZ-NM border. The young ones really kicking up their heels!