Life on the Edge: The Mogollon Rim and the Grand Canyon

As the terrible awful summer of 2020 wears on, we are spending as much time as possible far from Tucson. 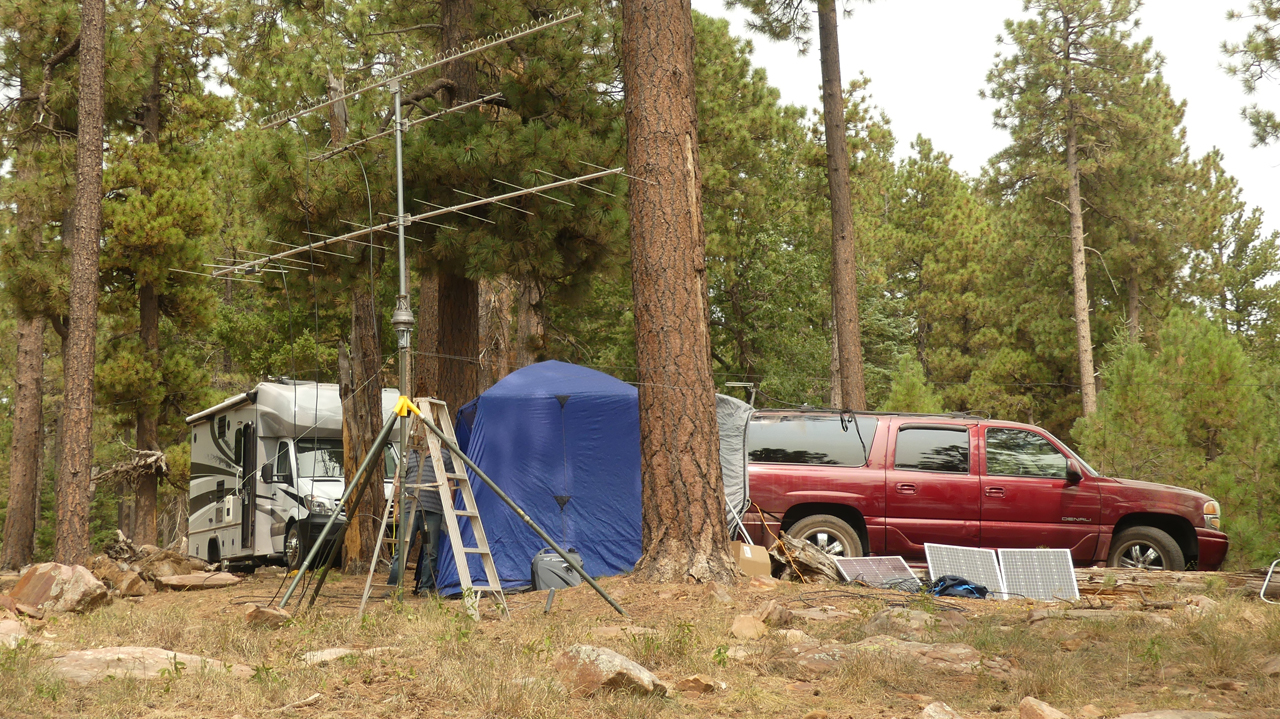 This year the pandemic delayed our planned Field Day camping trip with Ham Radio buddy Doug G. We rescheduled a socially distant trip to the Mogollon Rim for the fall VHF contest. 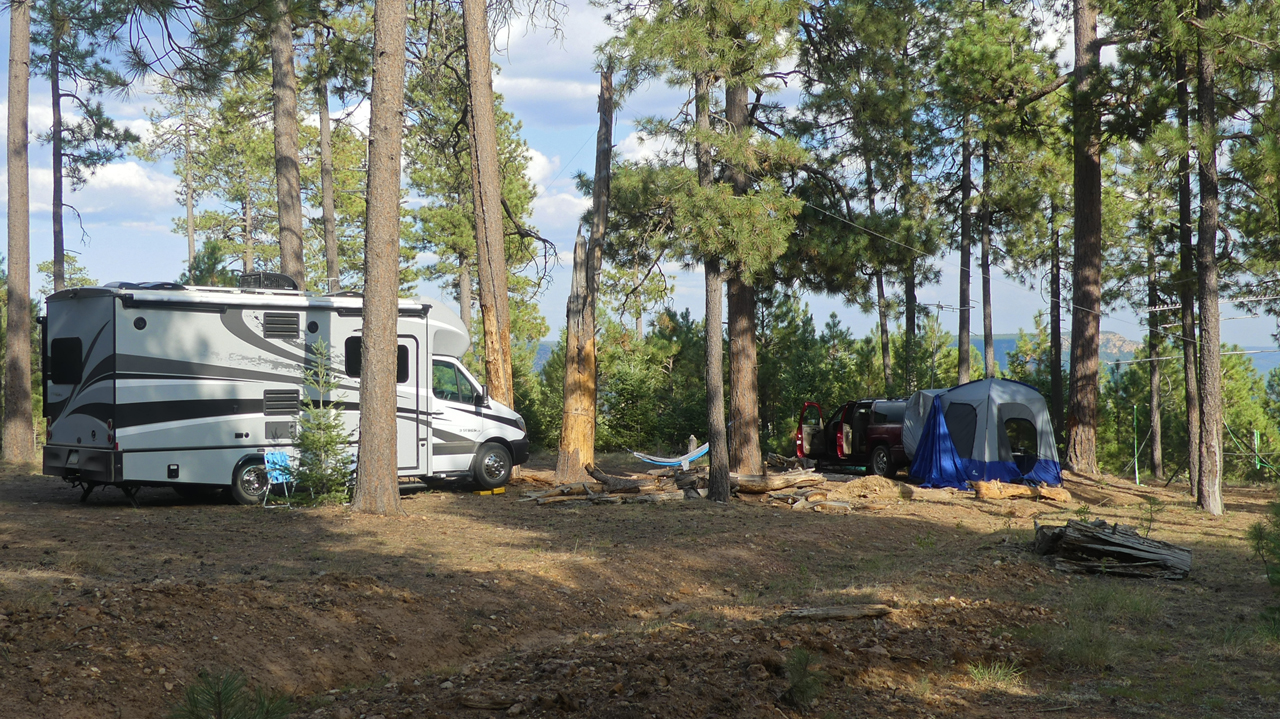 Though we were past the holiday weekend, we still had to travel farther than usual to find a spot. But the midsection of the Rim also has fewer piles of trash, overbuilt fire pits and speeding ATVs flying "Trump 2020" flags. 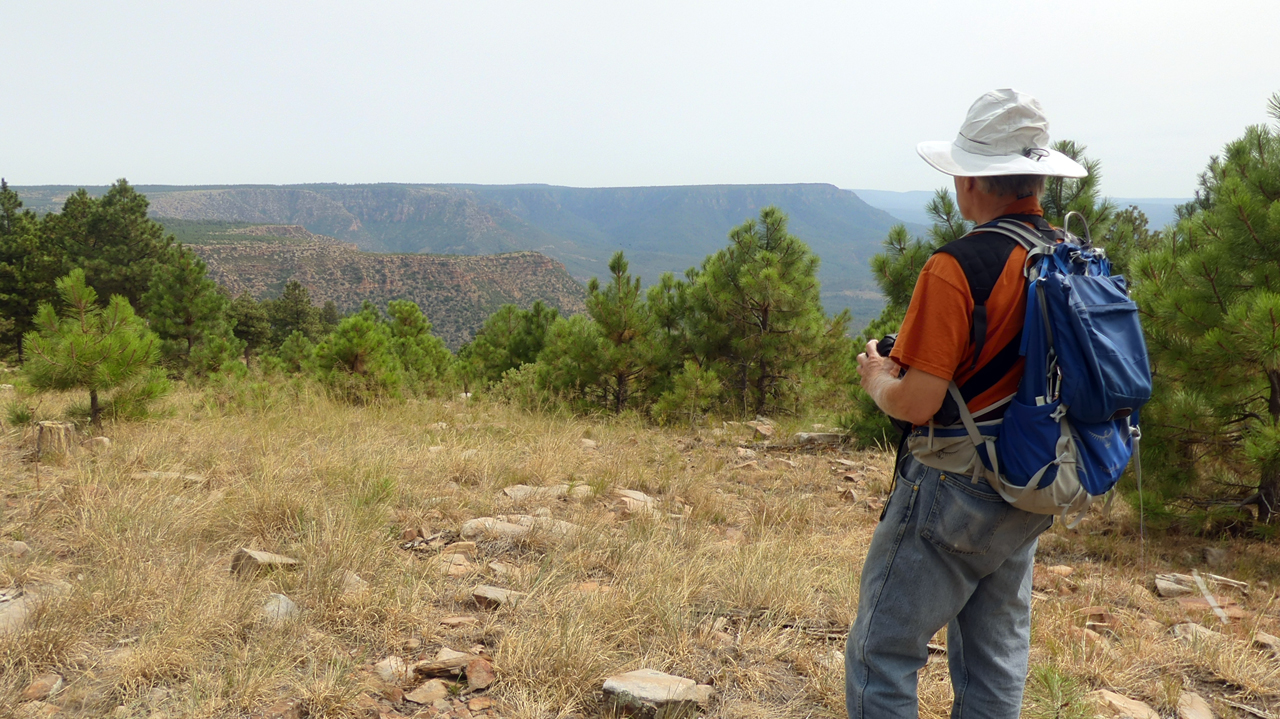 There are lots of great hiking opportunities, too, including a very nice loop along an old forest road to Myrtle Point. 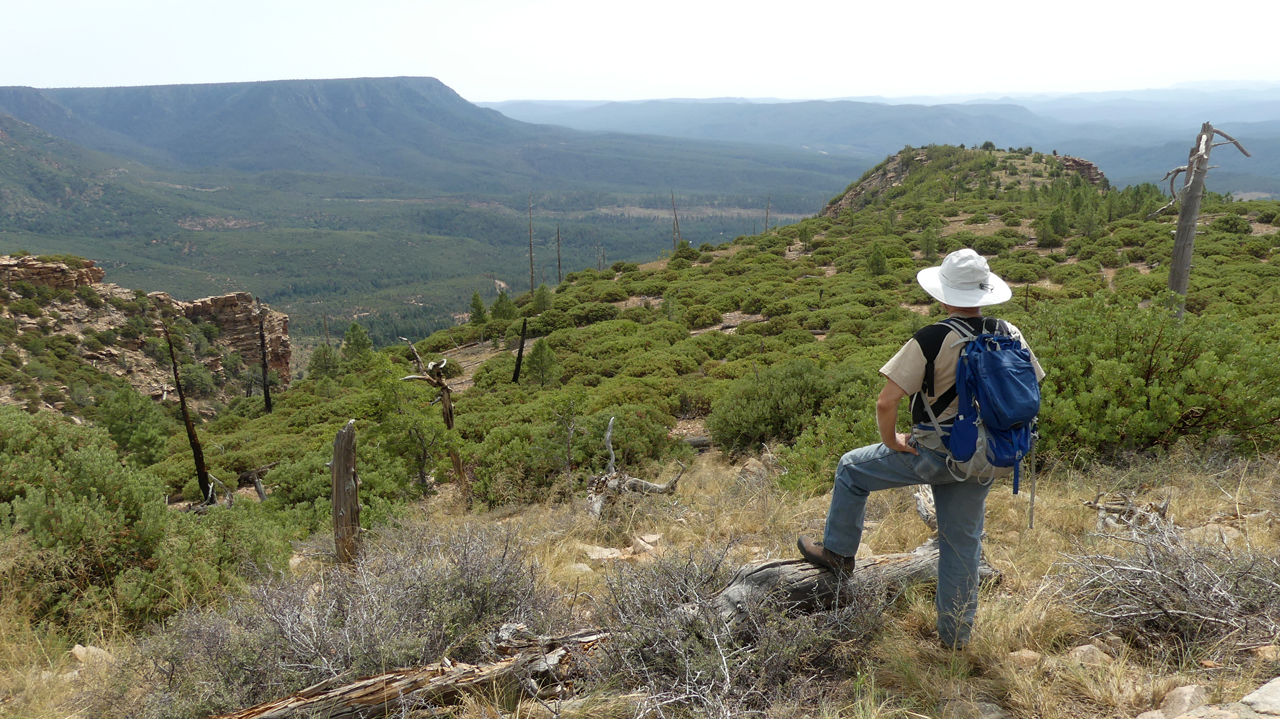 One of the best hikes was a bushwhack to the tip of a remote, narrow peninsula that reaches about a mile into the canyon. 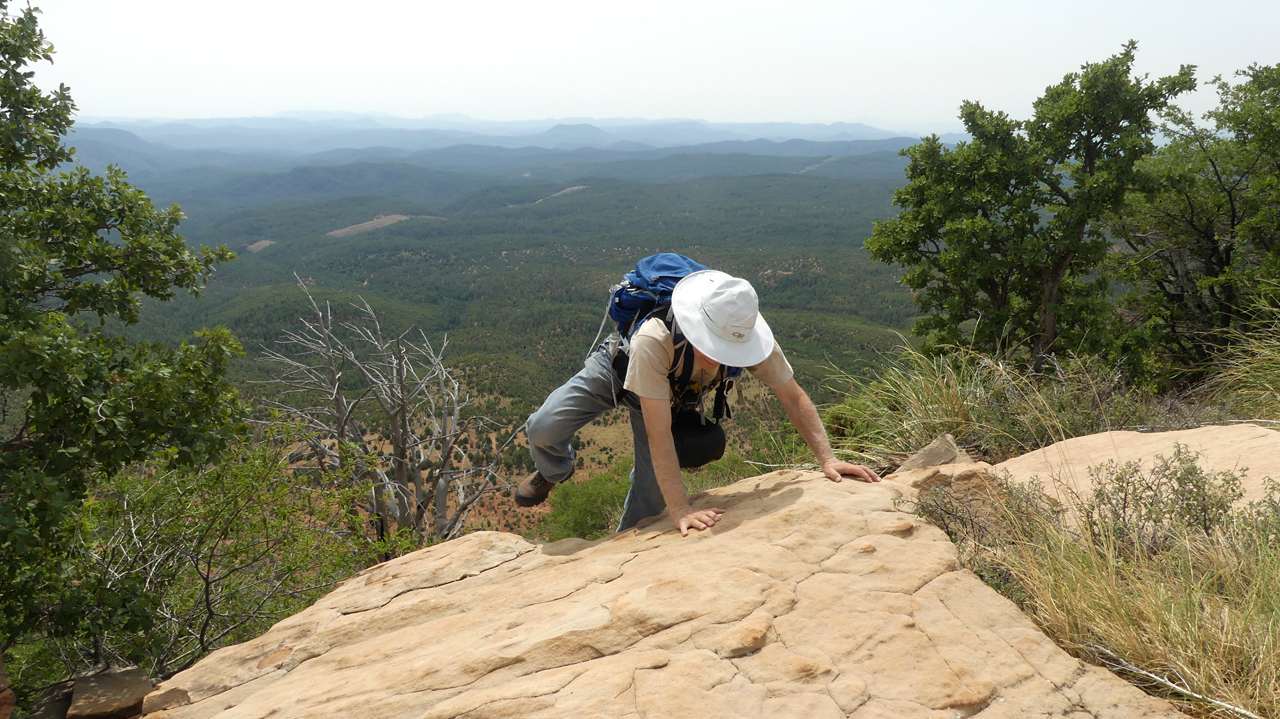 This area reminds me of some of the points on the North Rim. It has no name, but we called it "Elk Poop Point". 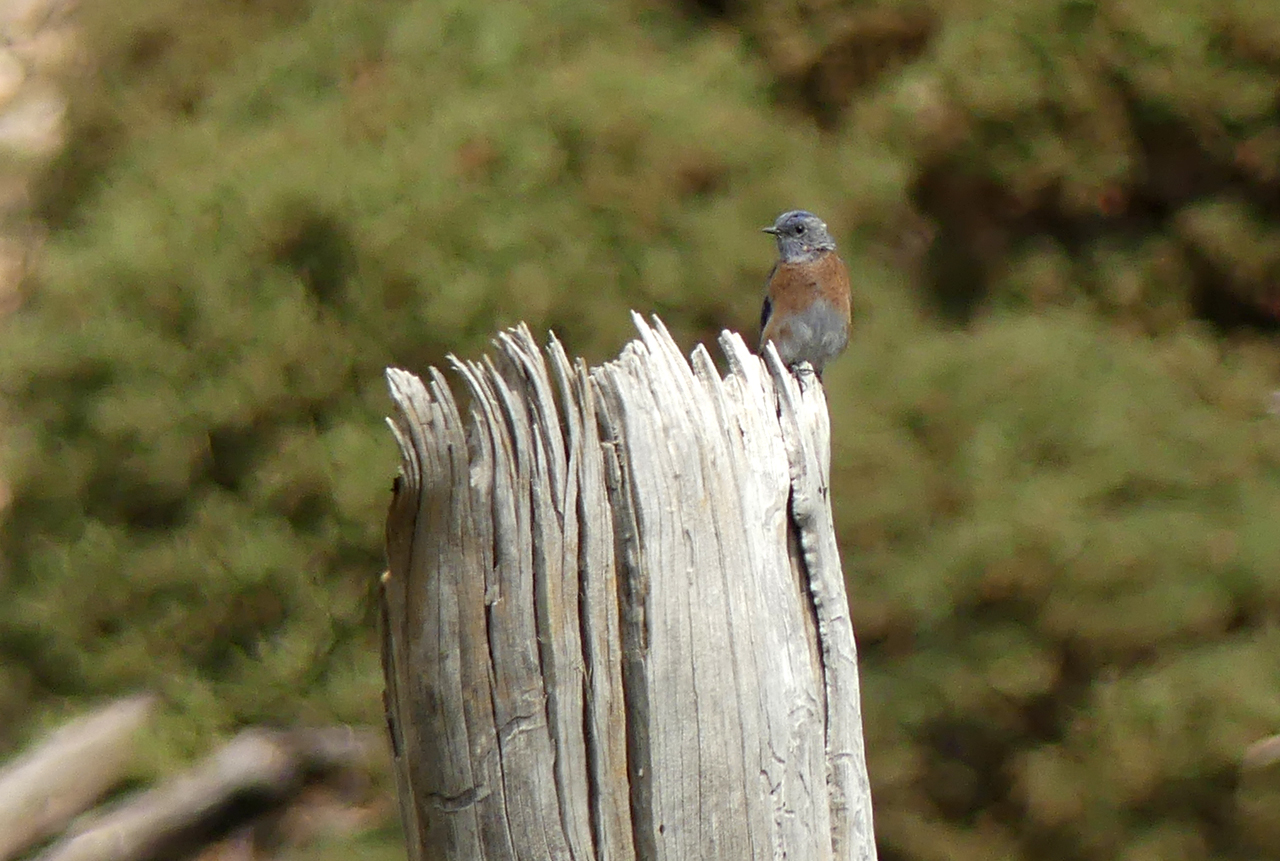 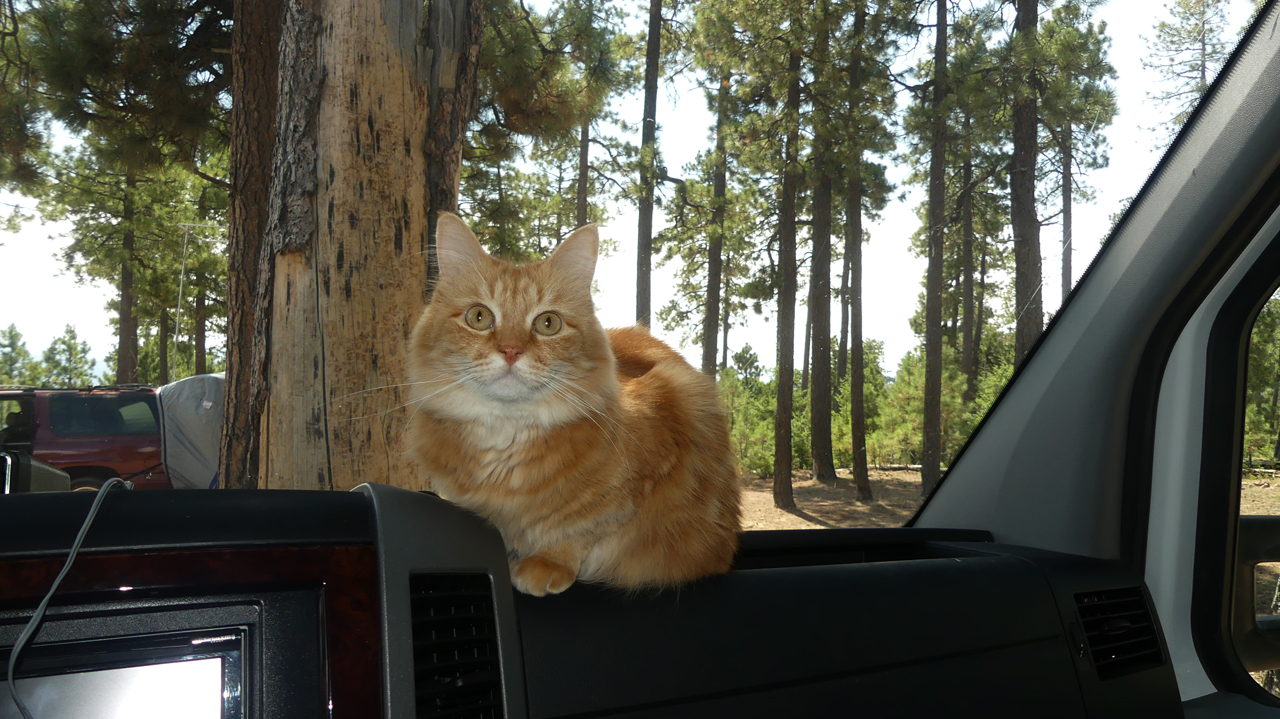 The cats seemed really comfortable on this trip. Almost no yelling while we were on the road, and once in camp they quickly settled into to their normal routine of napping, keeping lookout, snuggling and playing with their favorite toys. 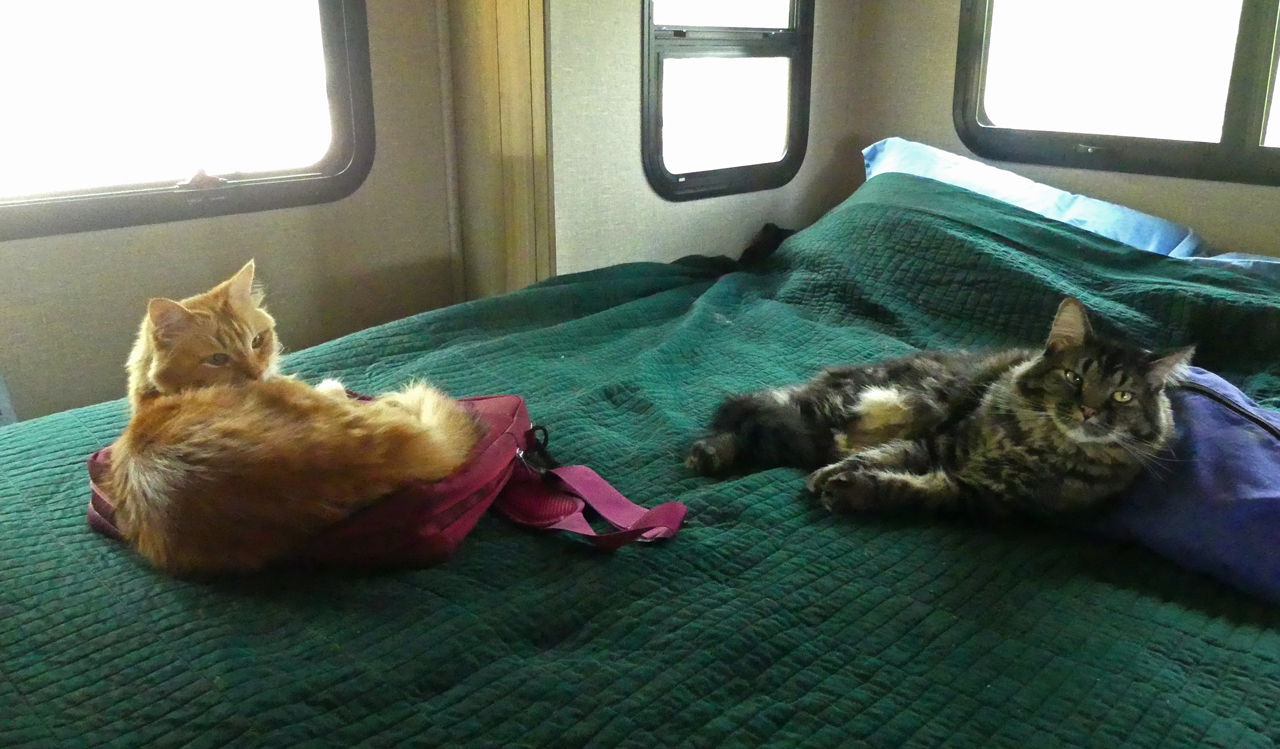 Heater Cats recharging for the evening. 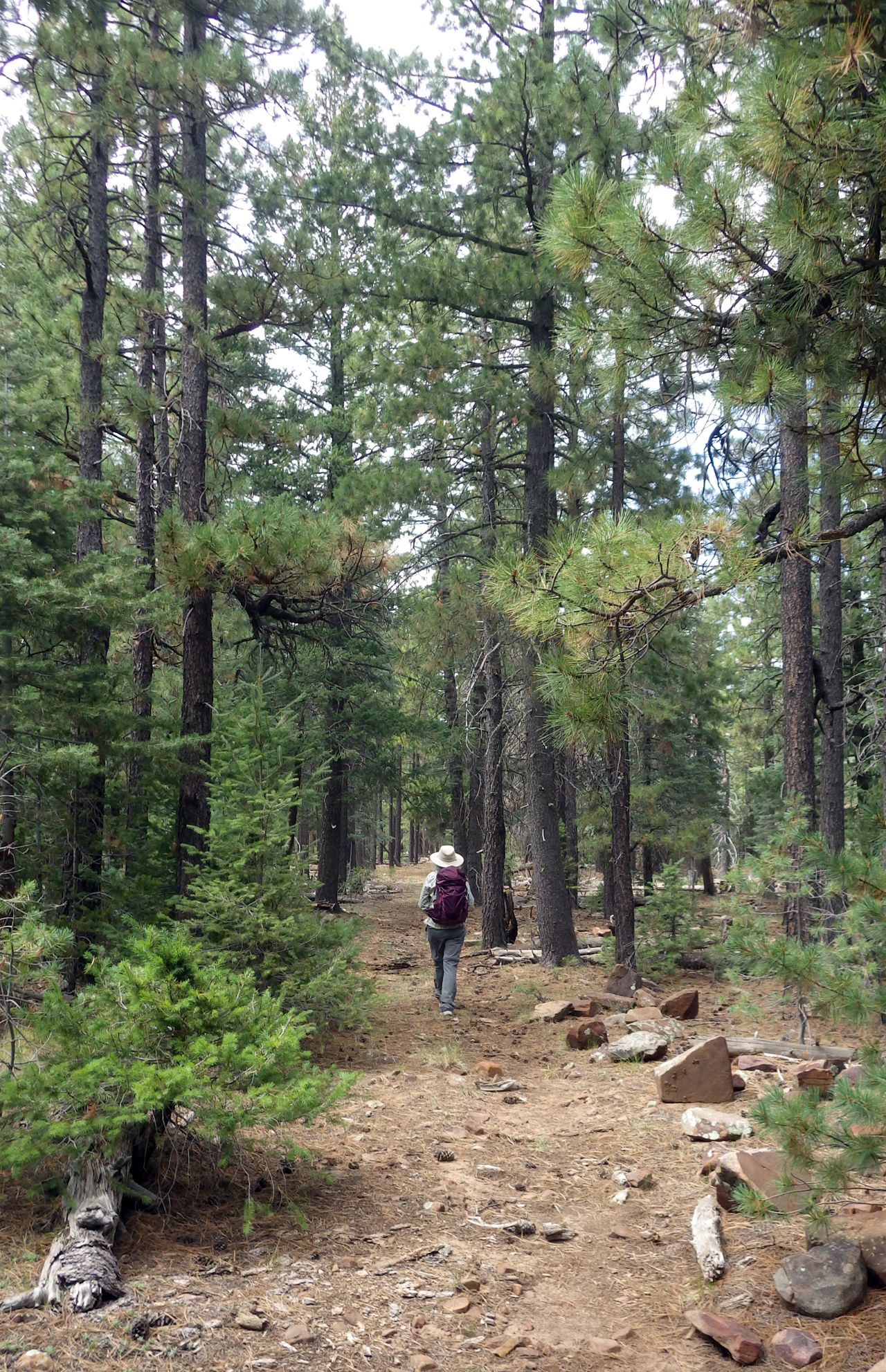 After numerous attempts, we finally located the famous General Crook Trail, not at all where shown on the old topo maps. Over a period of three days, we hiked about 15 miles of the trail. 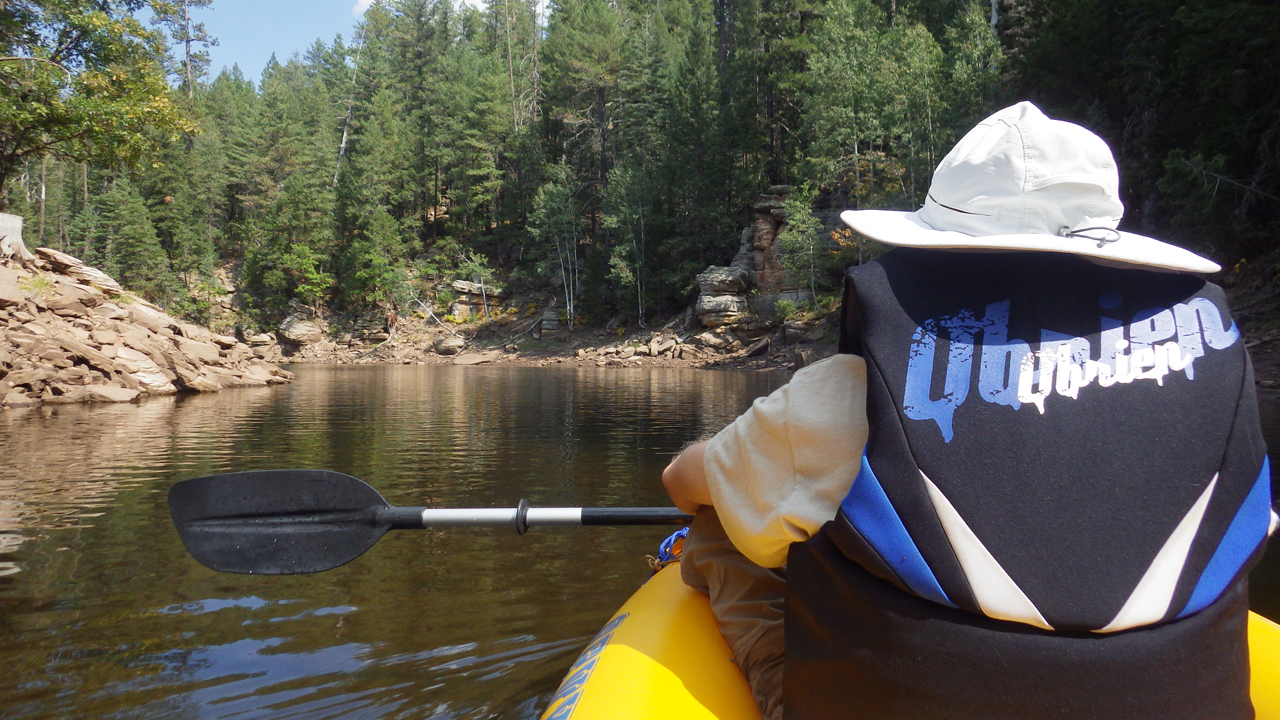 Since we were in the area and there was an inflatable kayak stashed under the bed, we took a day to explore Knoll Lake. There were fewer than a half dozen people about. 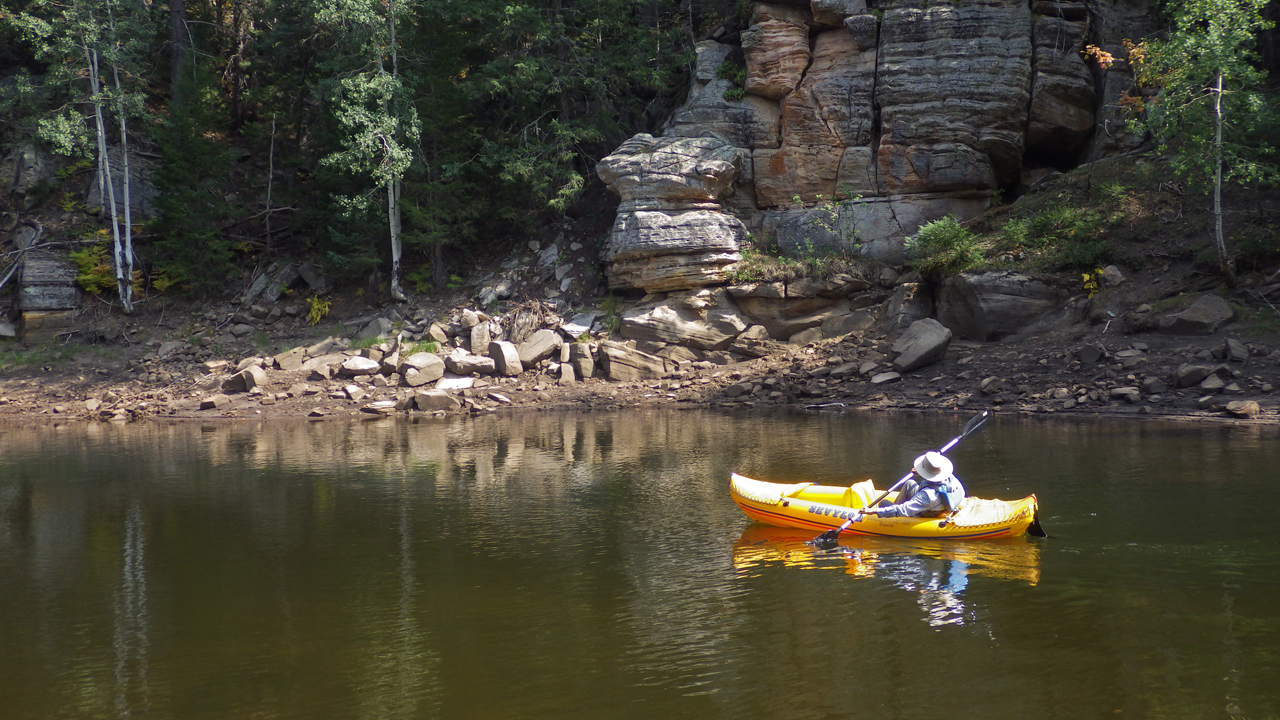 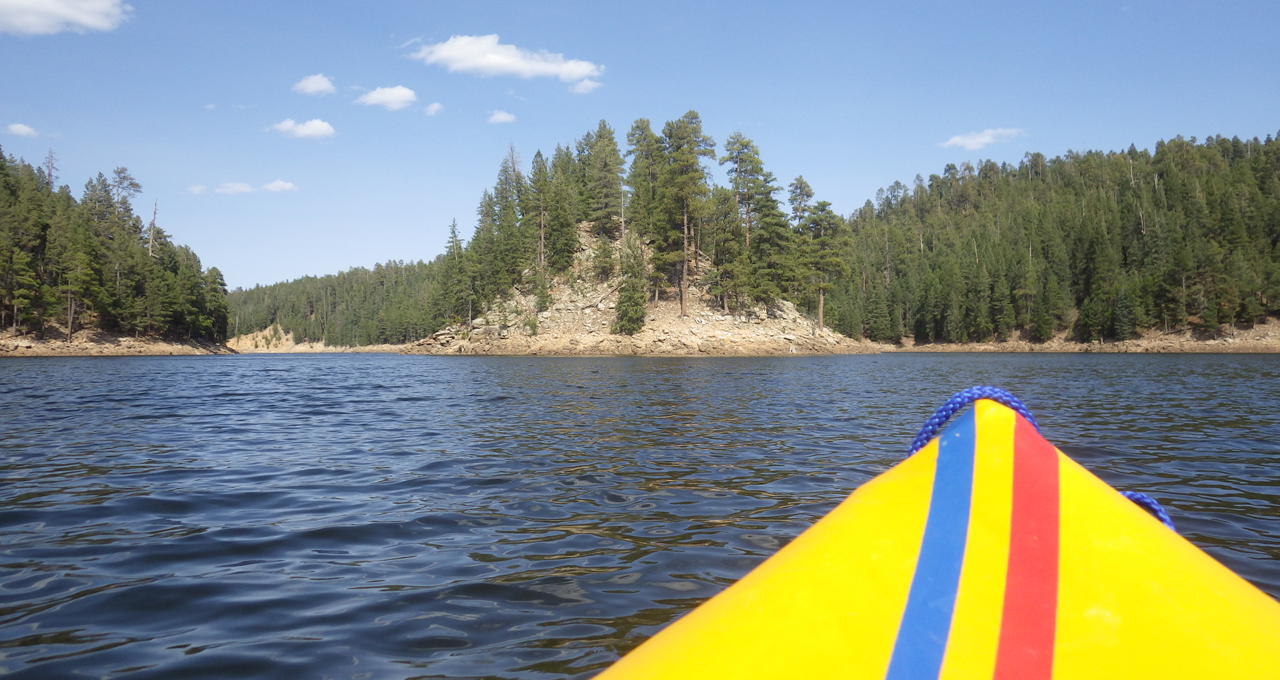 The knoll of Knoll Lake 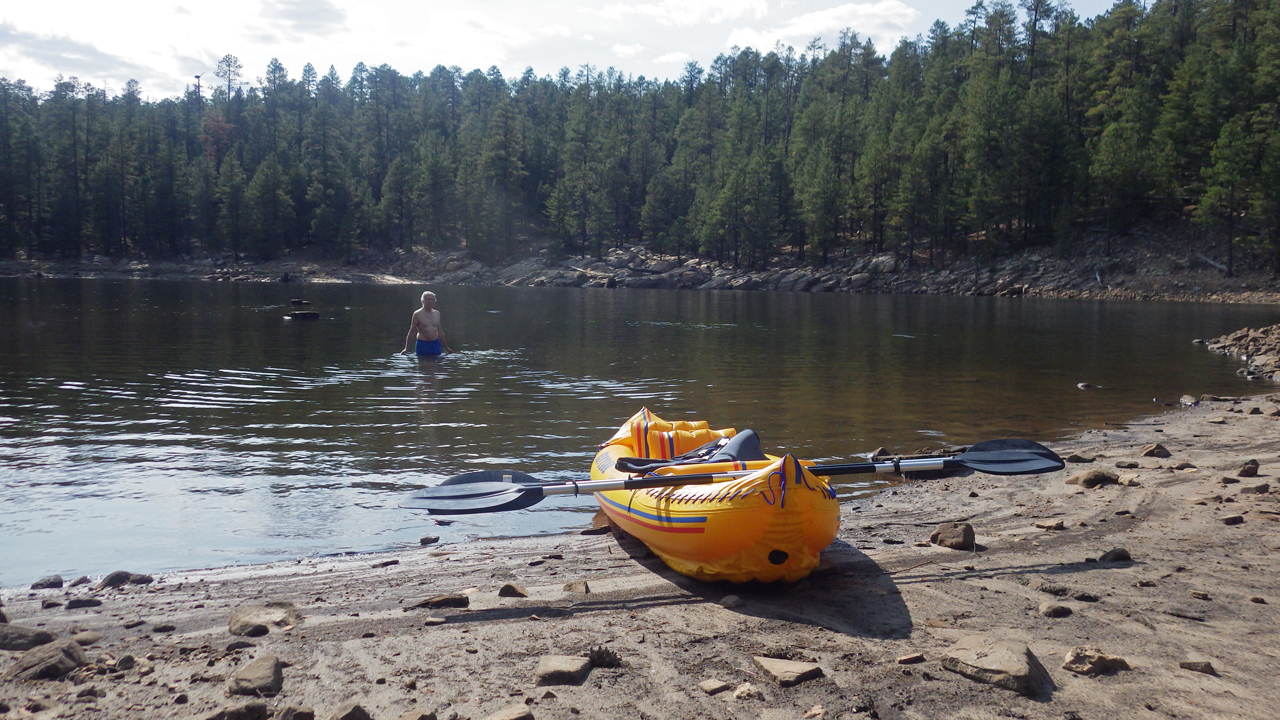 Fall was in the air and the water was already getting chilly, but we still managed a swim in a quiet cove. 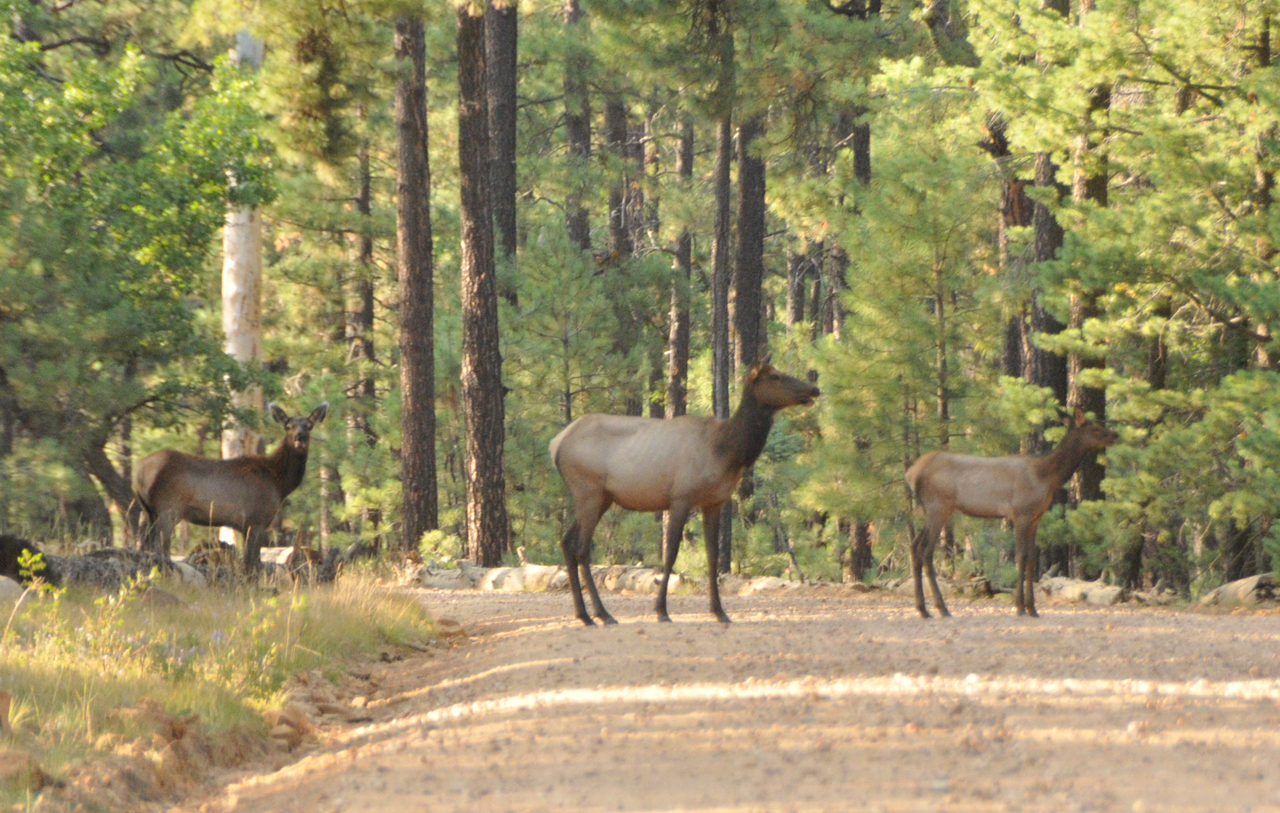 Wandering home from the lake, we came across a family of elk sauntering across the road in the late afternoon light. 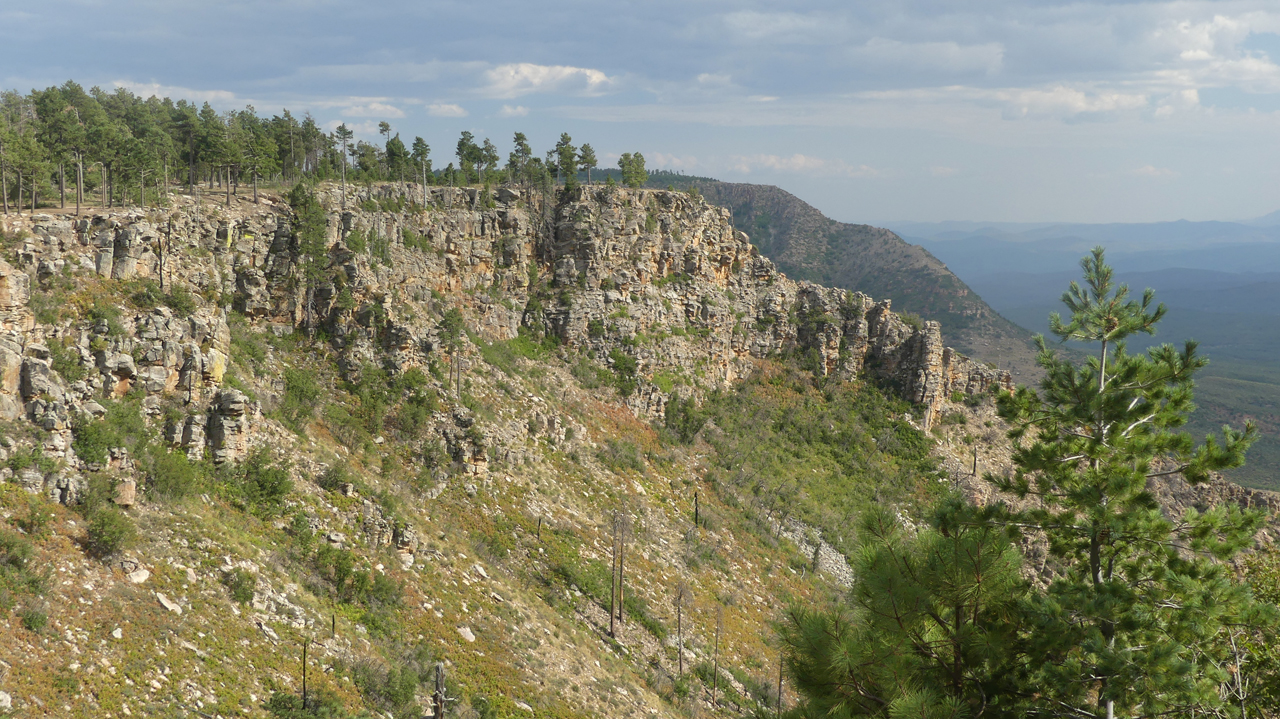 During one of our hikes, we found an RV-capable campsite with an incredible view. 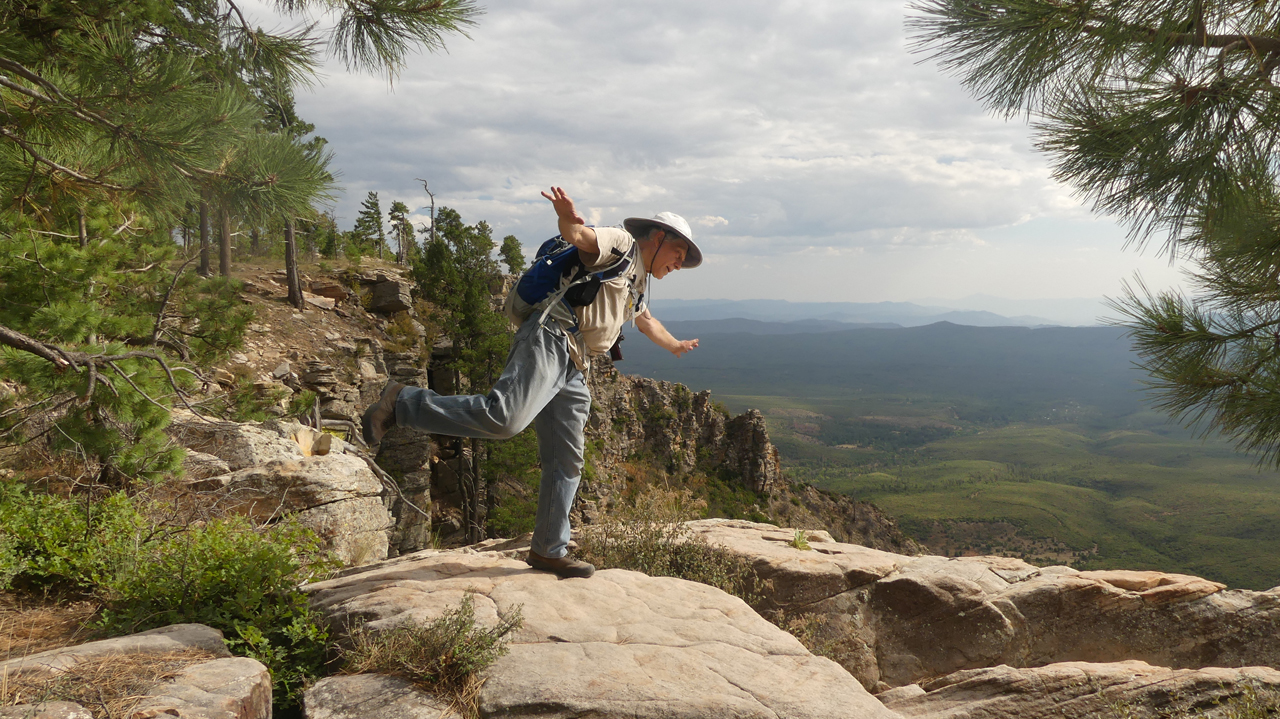 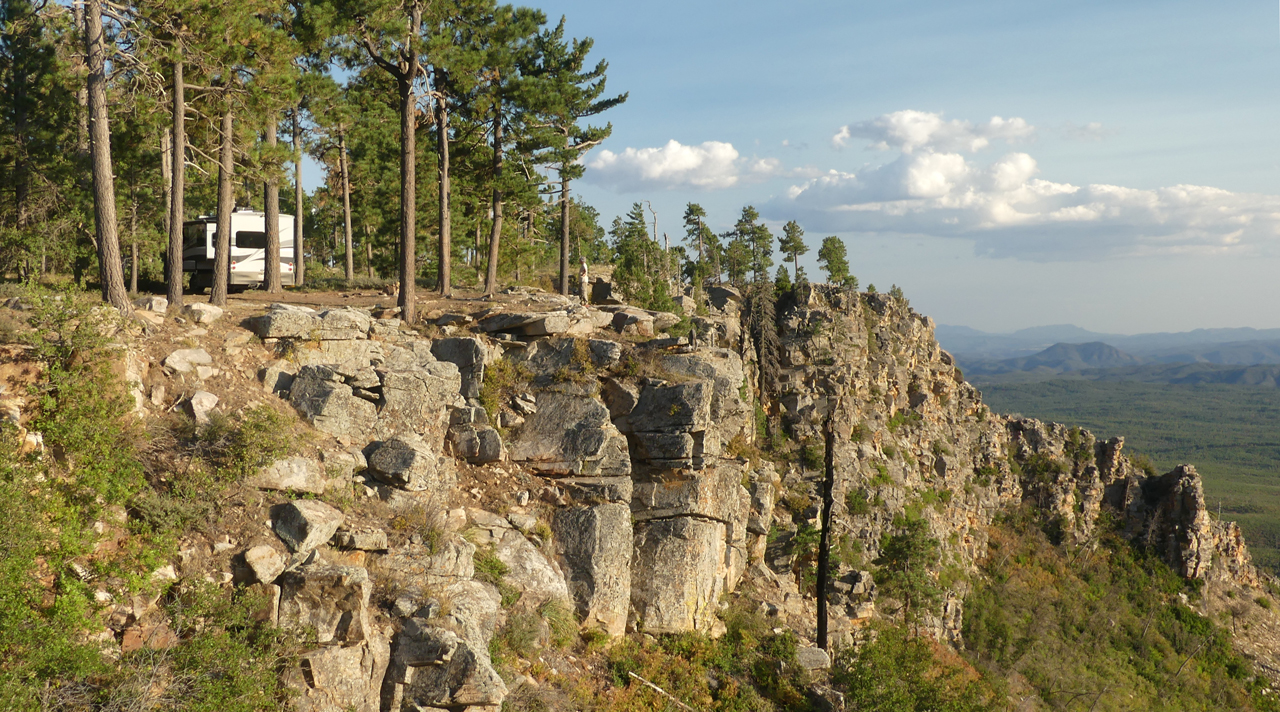 We would have settled in here for several days, but we were nearly out of water, and it was time for our weekly trip to town. 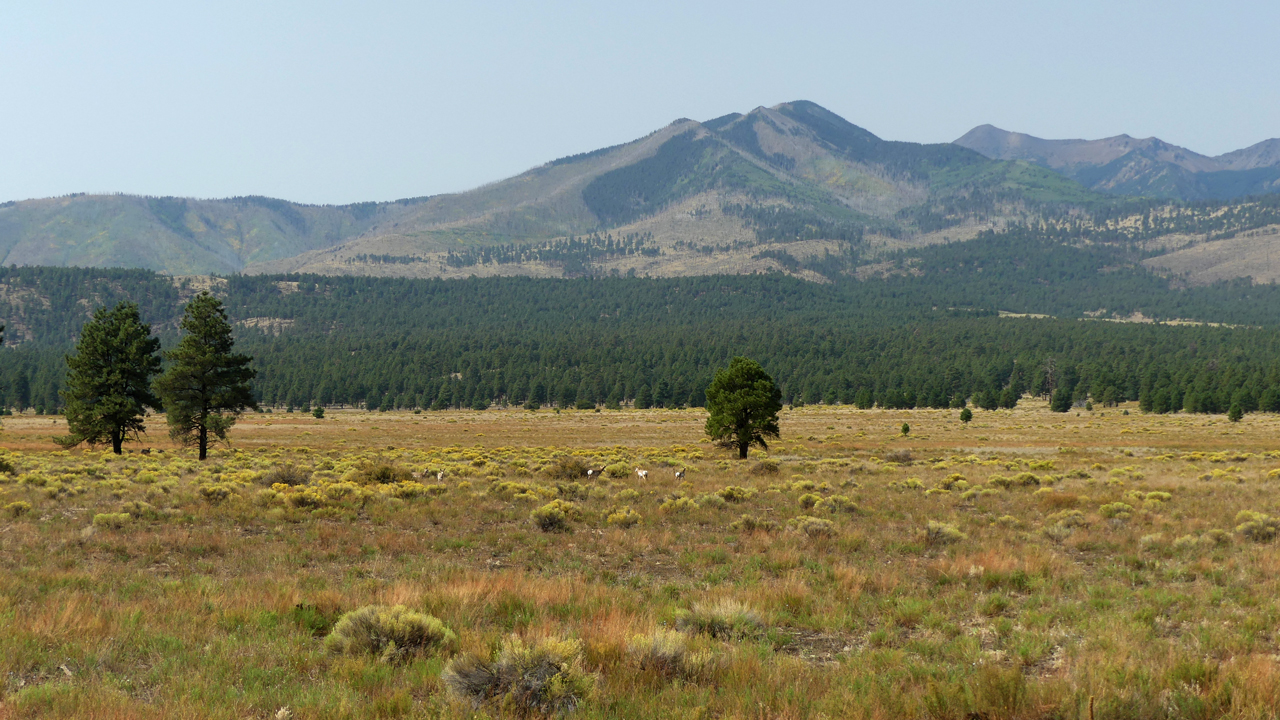 We headed for dispersed camping just outside Sunset Crater National Monument, but the spots were all occupied and the campground was overflowing. 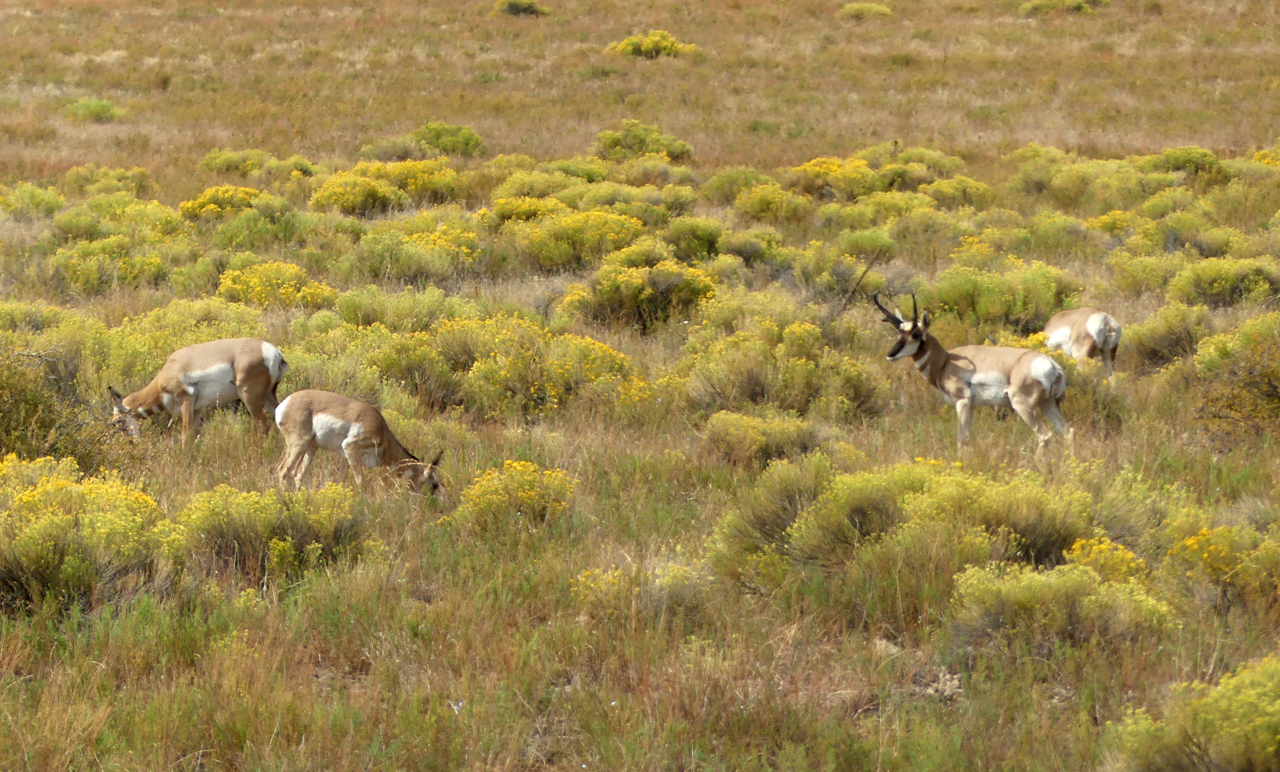 In Bonito Park near the park entrance, we spied a herd of pronghorn antelope. 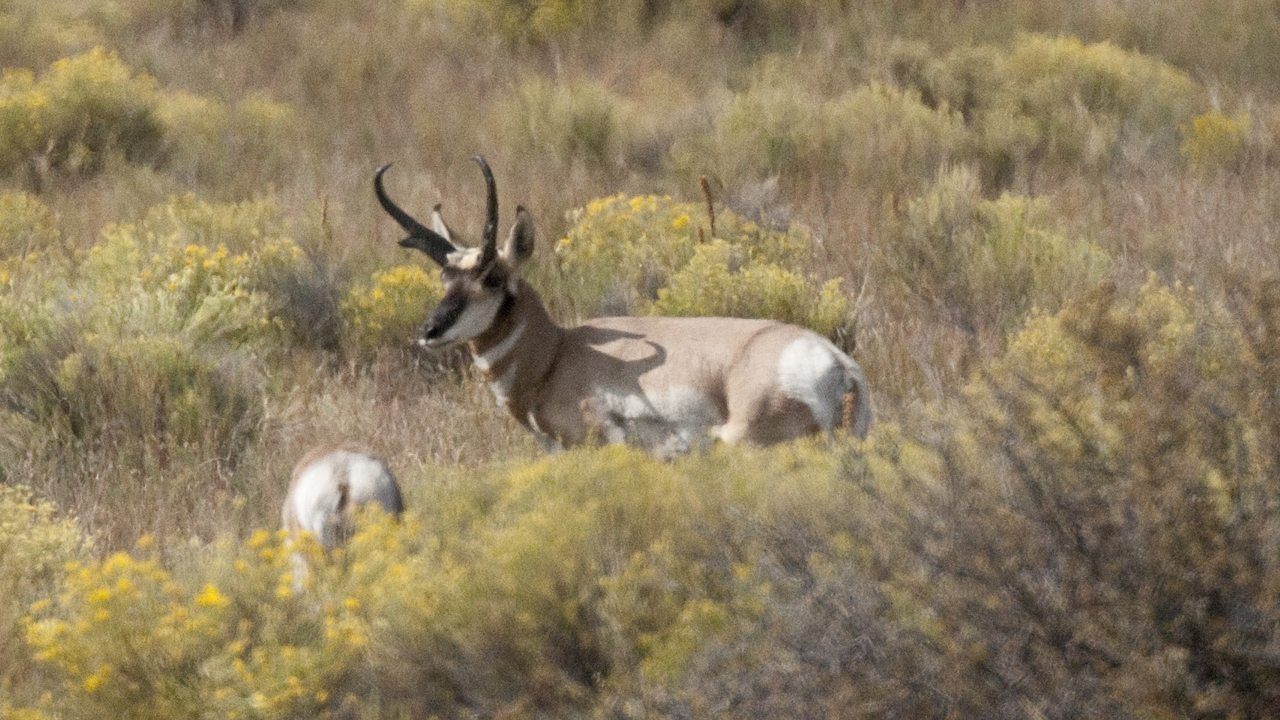 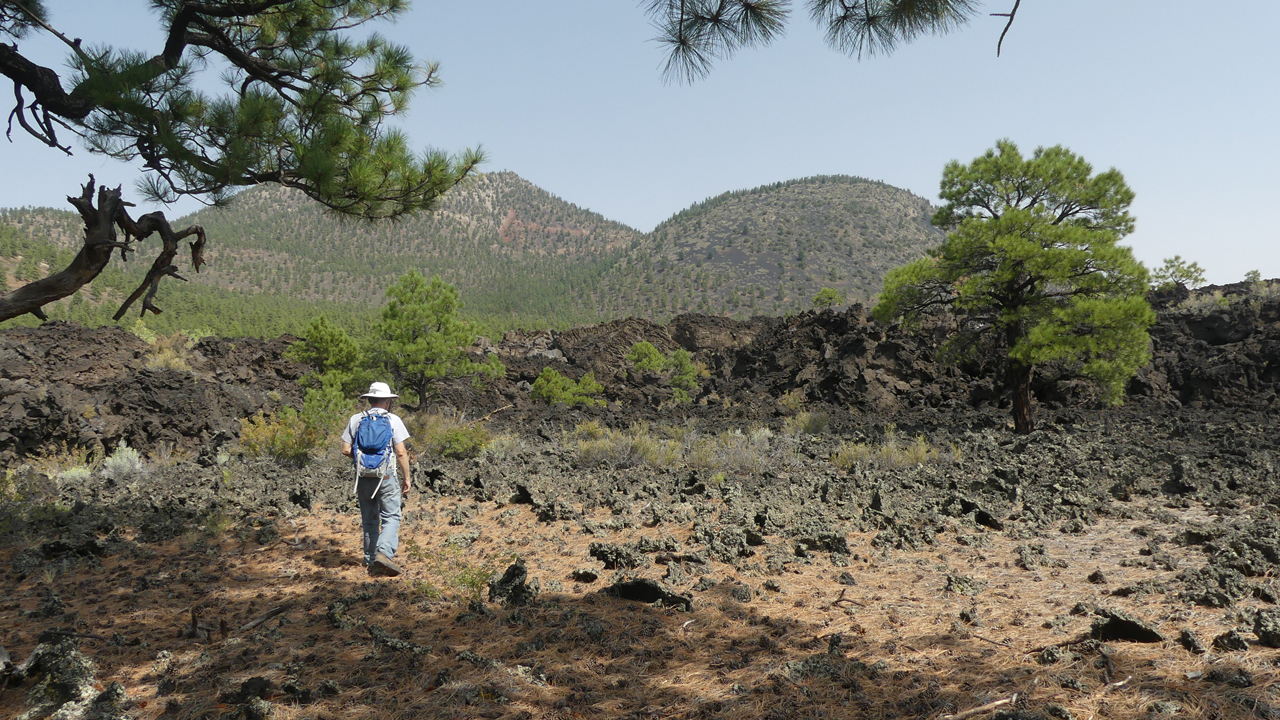 The next day we started up O'Leary Peak, the only significant hike in Sunset Crater NM. 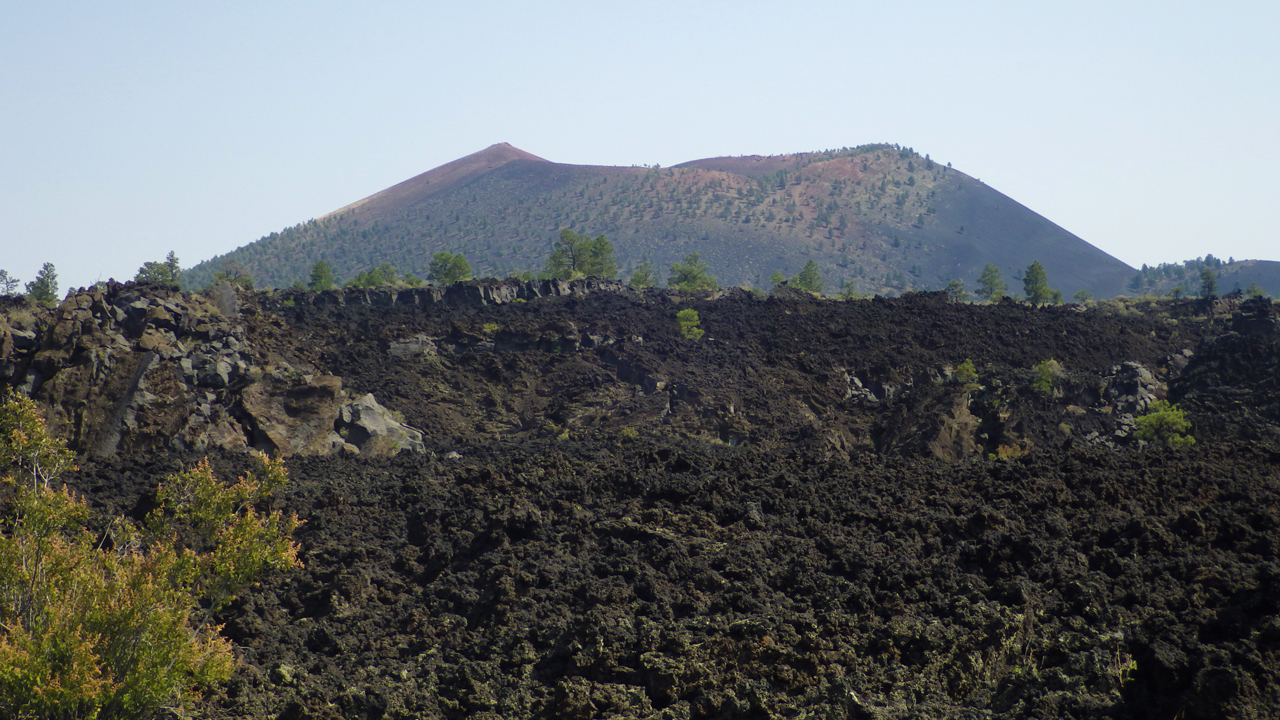 Sunset Crater in the distance. 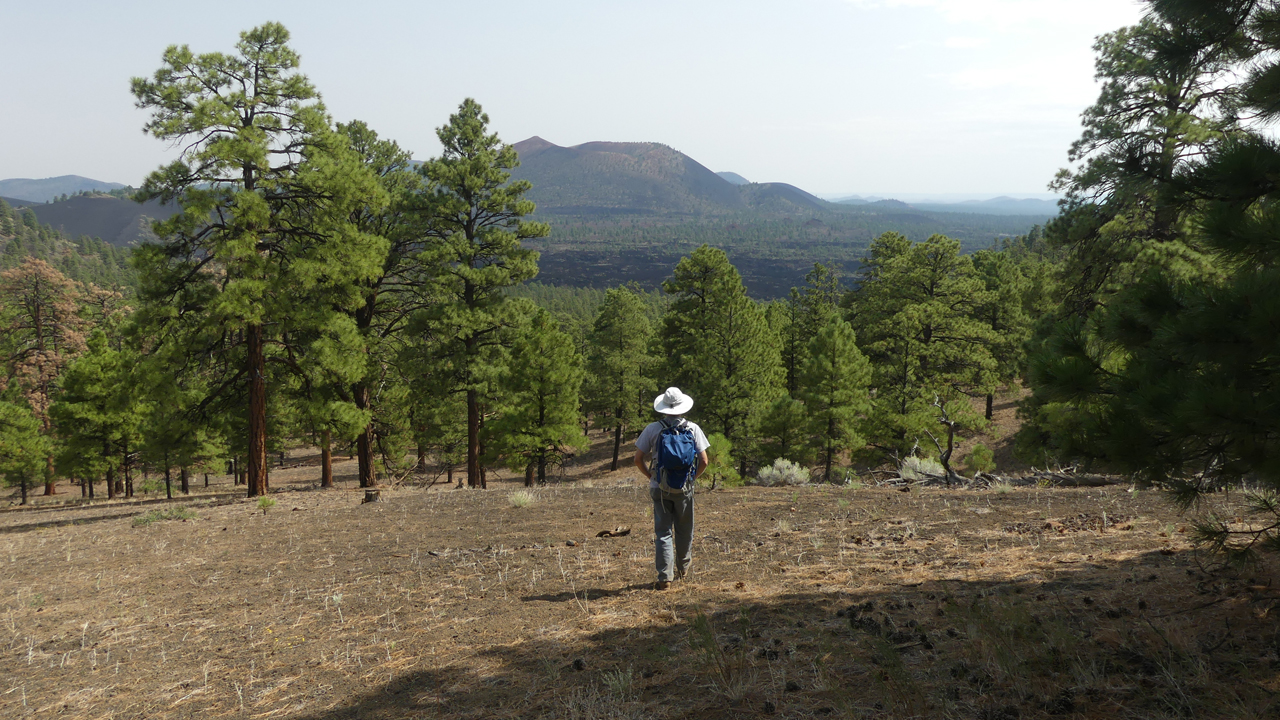 O'Leary Peak is considered a "boring" hike since it follows an old forest road, but we appreciated it for the close-up views of the ragged edge of the Bonito Lava Flow. 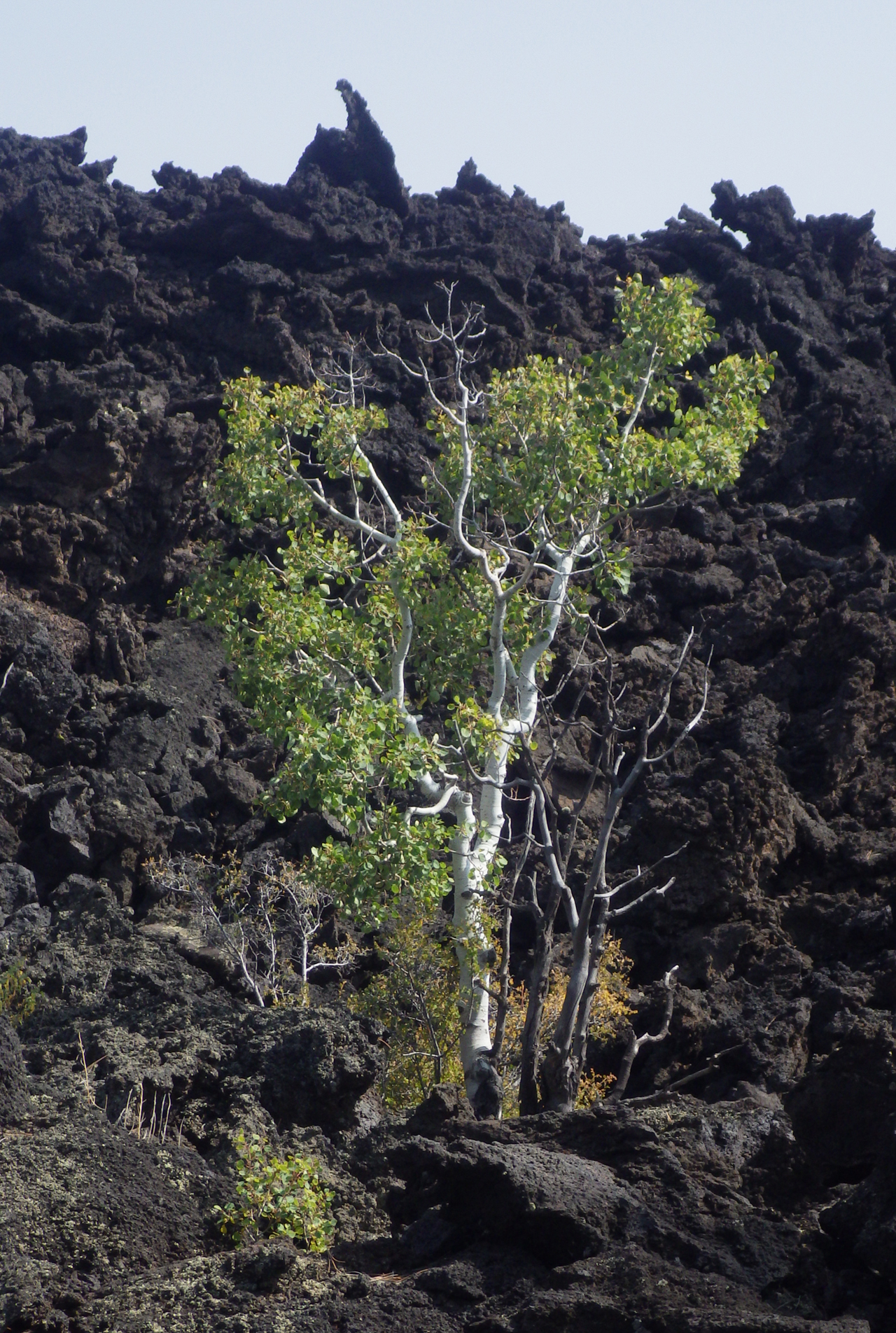 Although Sunset Crater erupted in 1085 CE, the lava is so black and abrasive it looks like it was laid down yesterday. 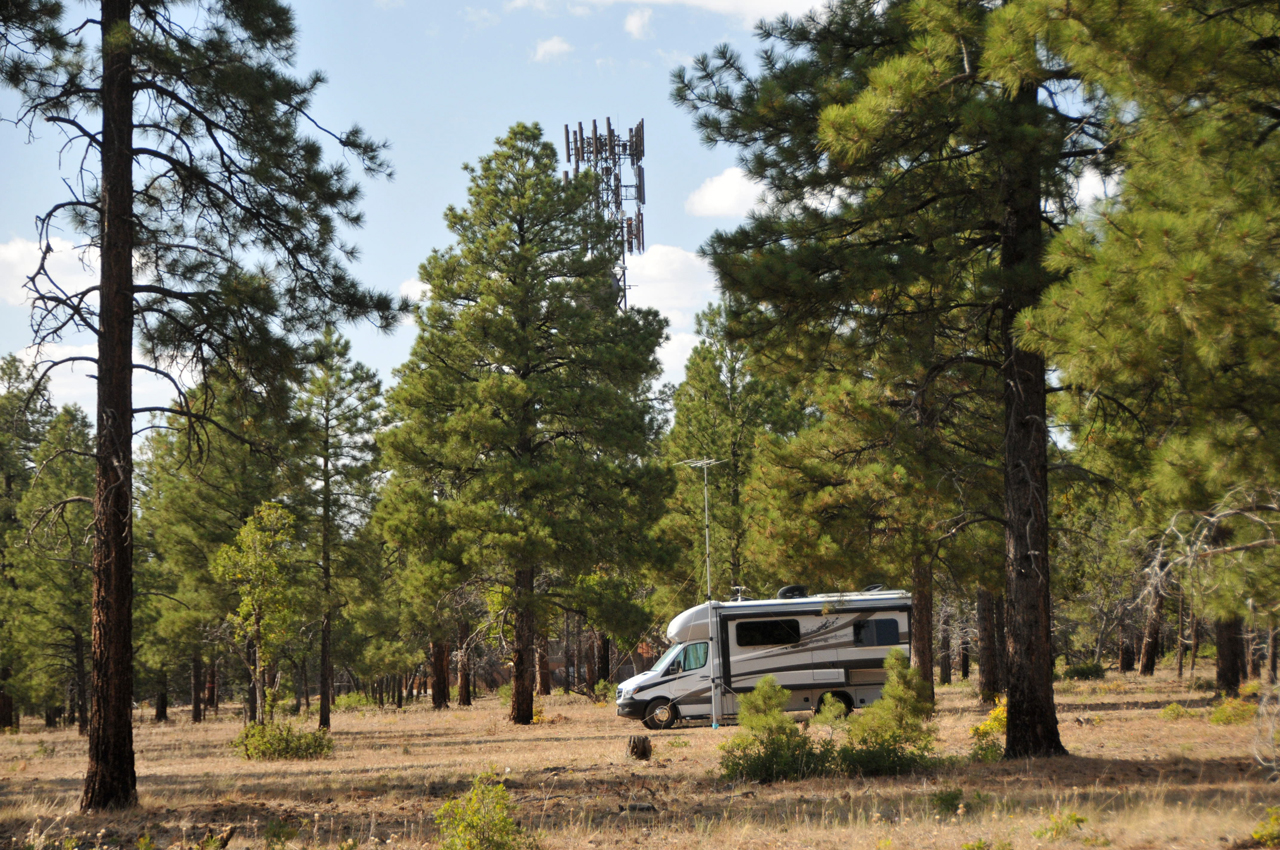 Our plan was to camp near Sycamore Canyon Rim Trail, but the road was too severely washboarded for our RV's very stiff suspension. On a whim, we veered north to the Grand Canyon, and found a sweet campsite just outside the park. 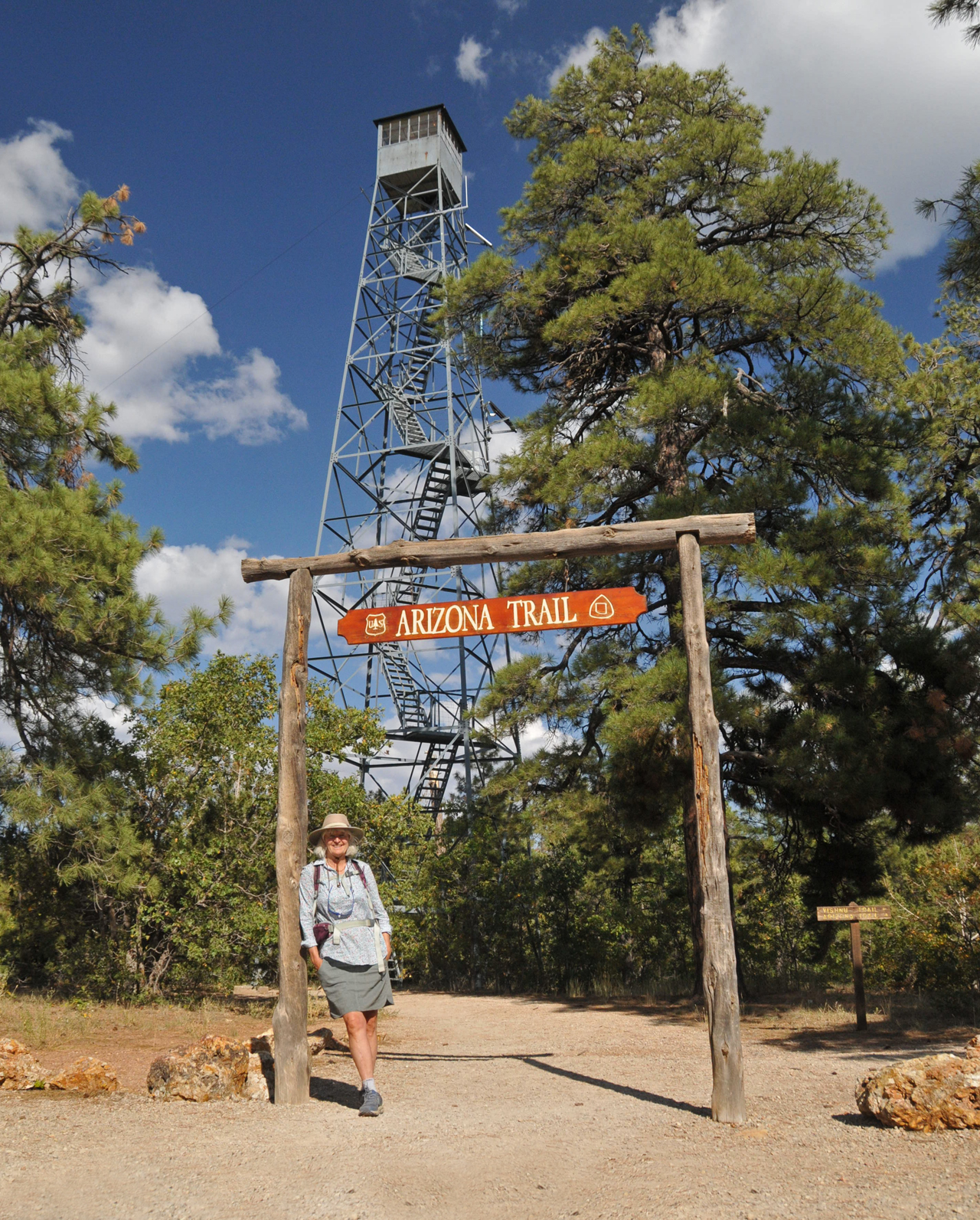 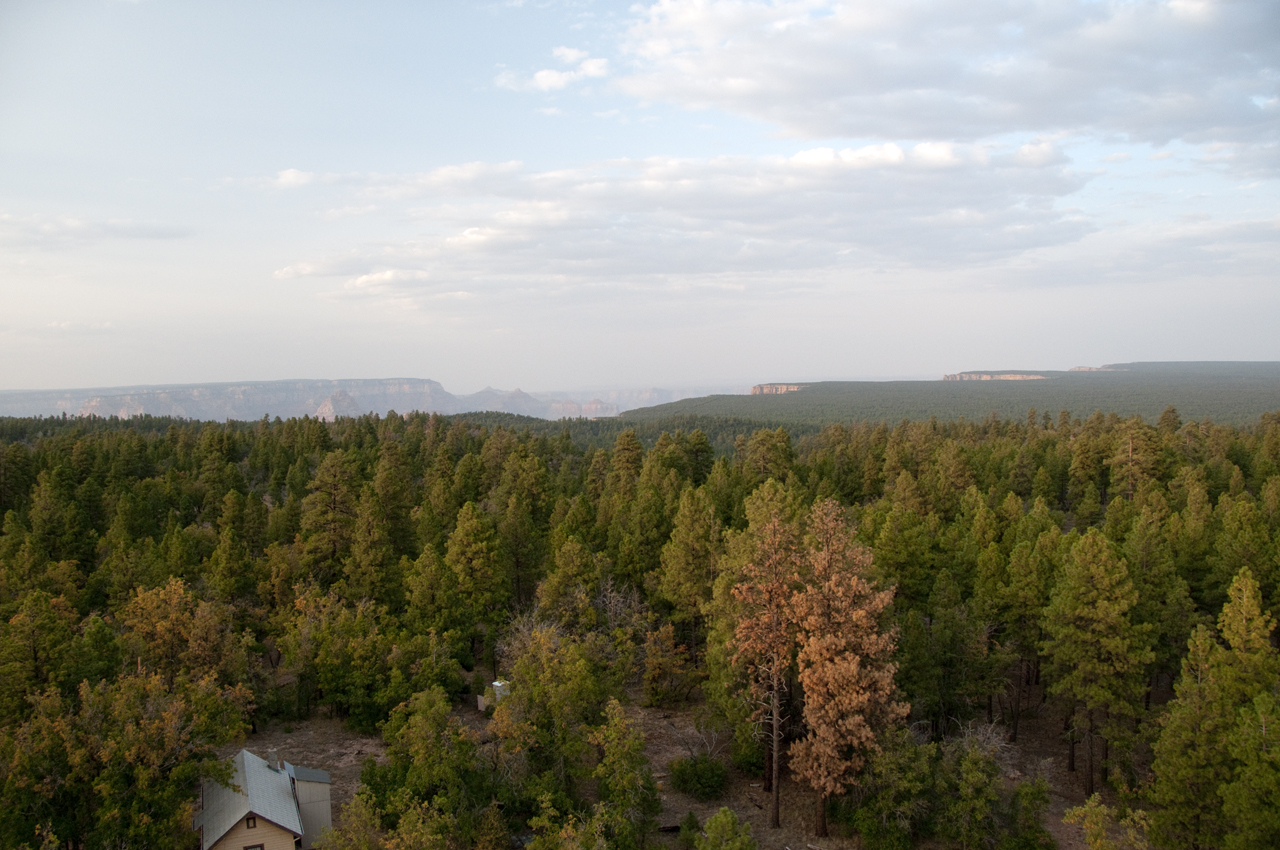 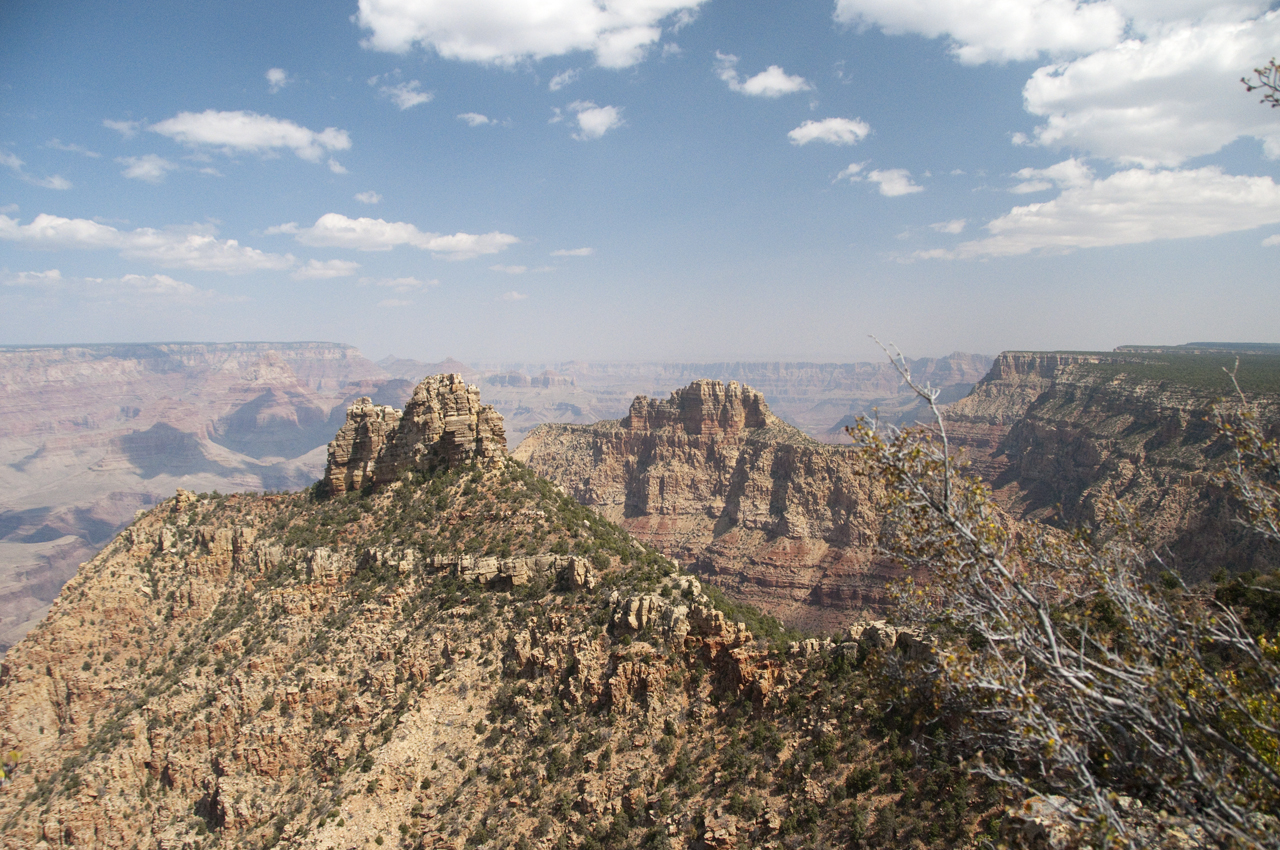 Our first hike was a delightful bushwhack to the Rim of the Grand Canyon. 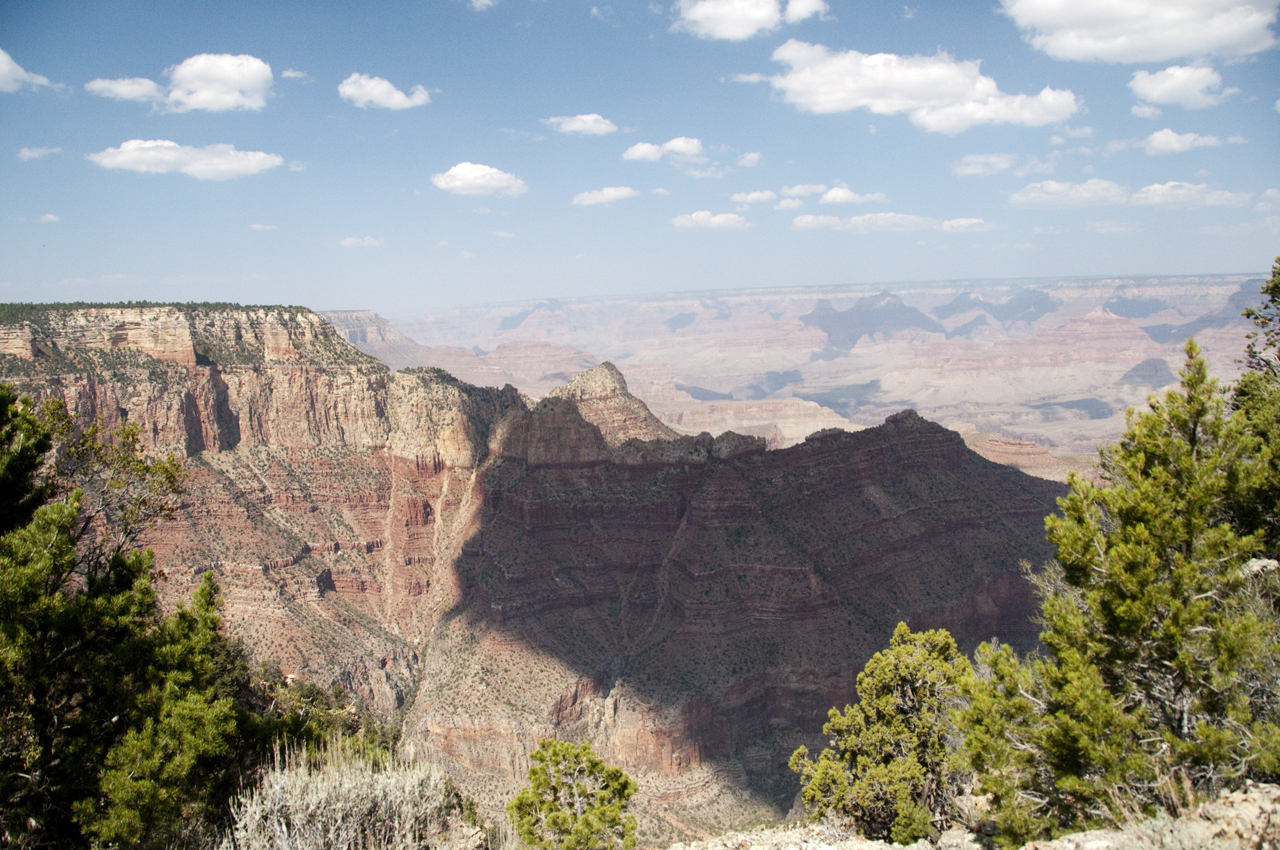 There was no hint of any trail, ATV track, fire ring or rock cairn. Just wilderness. It was enough.

The next day we wandered south on the Coconino Rim section of the AZT, where we were ultimately rewarded with a great view of the South Rim and the Painted Desert. 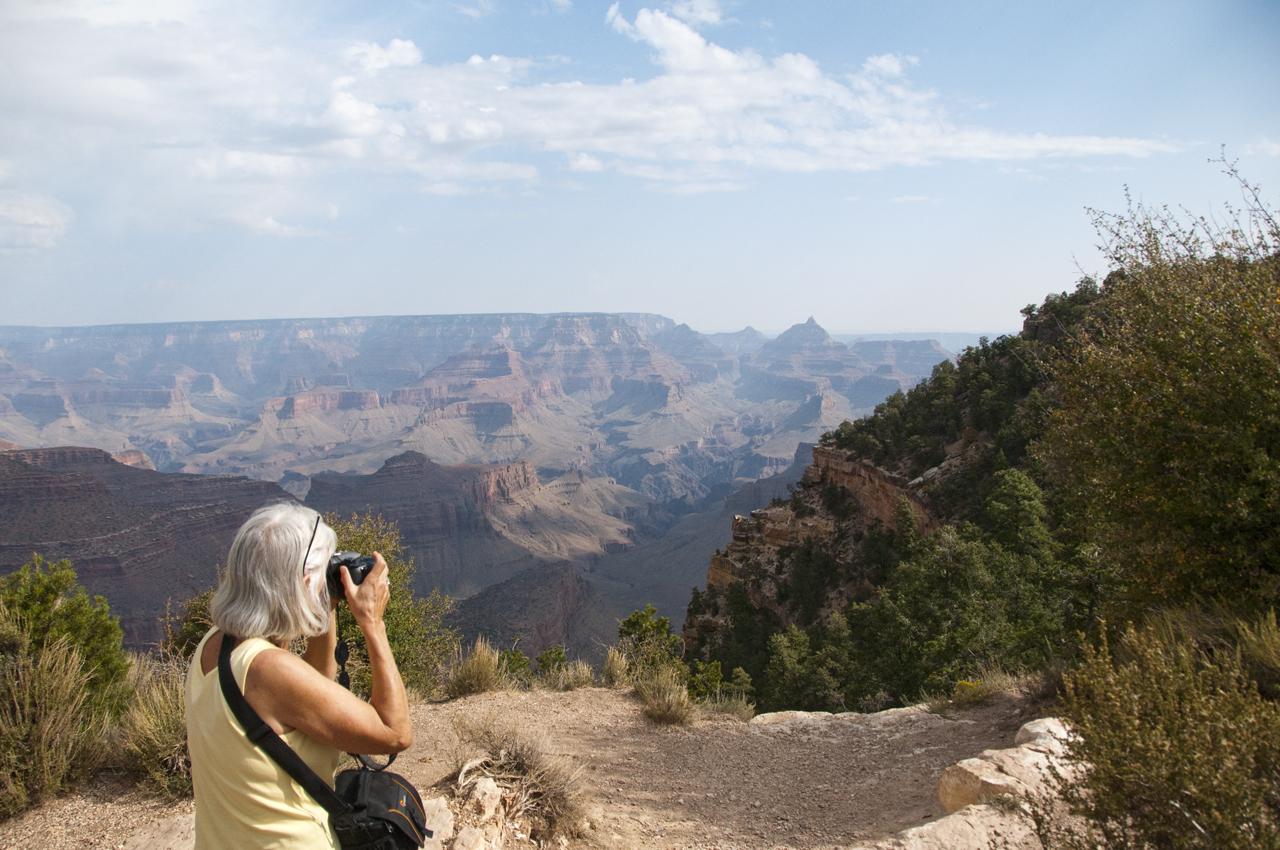 All told hiked more than 30 miles in one week, most of it bushwhacking. I was very sad to return to Tucson, where it seems the norm is now six months per year of temperatures in excess of 100°. :-(