We finally made it to Cooke's Town — on a day when we had absolutely no intention of going there. Instead, our plan was to pair a trip to the Deming Rockhound Roundup with a long-delayed exploratory hike of Cooke's Peak. 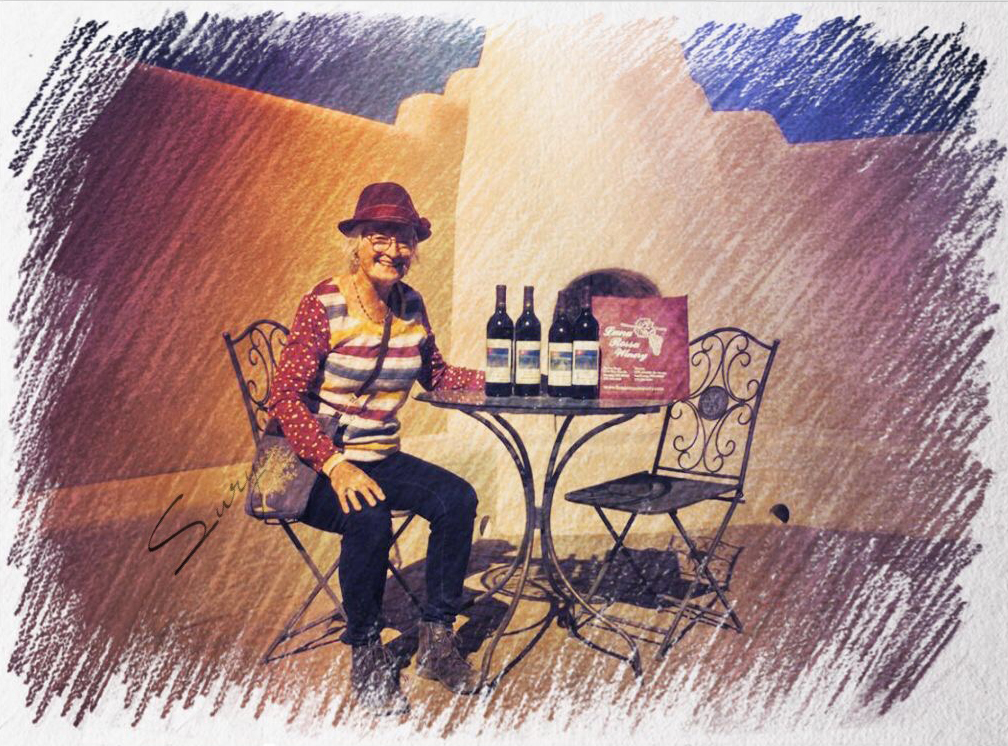 We planned to camp that night, so there was time after the show to check out the two wineries in Deming. Our take:
· Lescombes: Easy to find (east of town on 459), tastings of four wines $12-$15 pp, formal/stuffed shirt atmosphere, incredibly unfriendly and unhelpful staff (we walked out).
· Luna Rossa: Very challenging to find (you have to earn it), FREE tastings of five different wines, fun and informal atmosphere, friendly and helpful staff. Restocked the cellar. Can't wait for "Pizza Night"!

We clawed our way to a campsite near the trailhead, but the sun sets very early in the imposing shadow of Cooke's Peak! 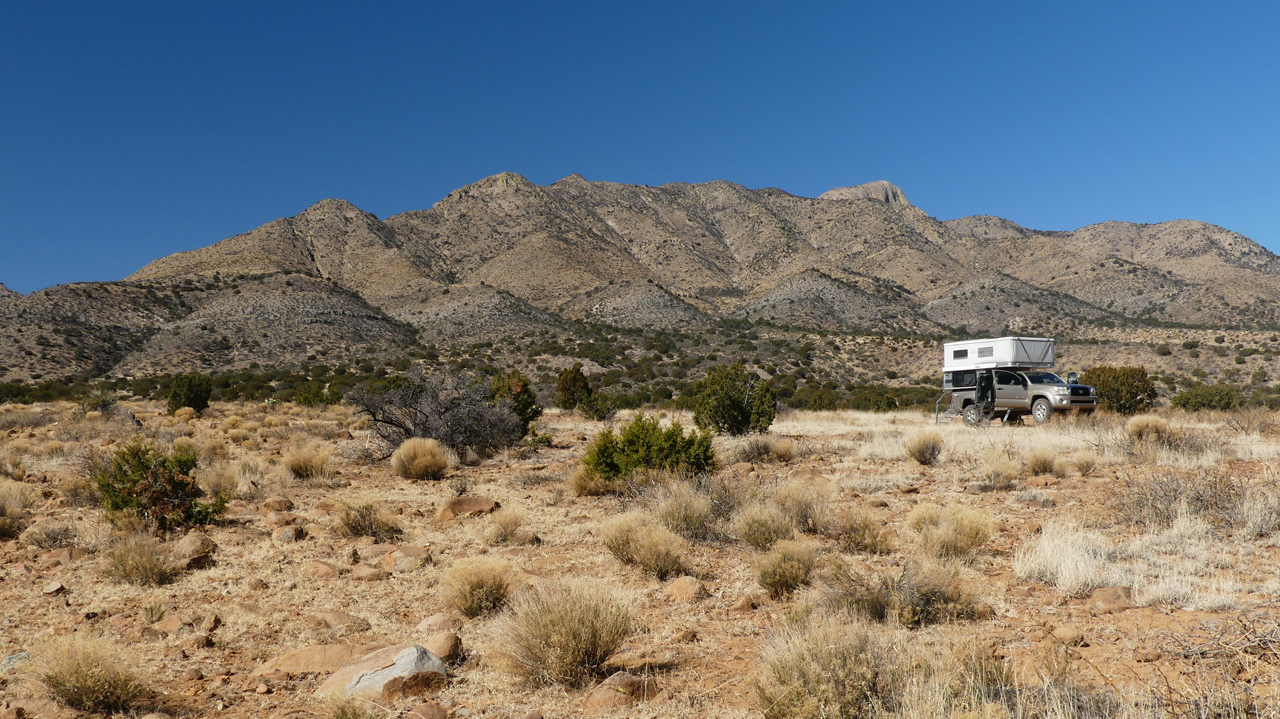 Blueberry waffles and coffee, then it was off to find the "trail" to Cooke's Peak. Despite the dire warnings of a local hiker who considers this "his" hike, the rough road did not destroy our vehicle, nor did we get hopelessly lost, nor drowned in the creek, nor eaten by mountain lions. The trail is faint and does require a gpx track and map-reading skills, but the road is normal 4WD high clearance, the stream was bone dry and there were, unfortunately, very few signs of wildlife (just mountains of cow poop). 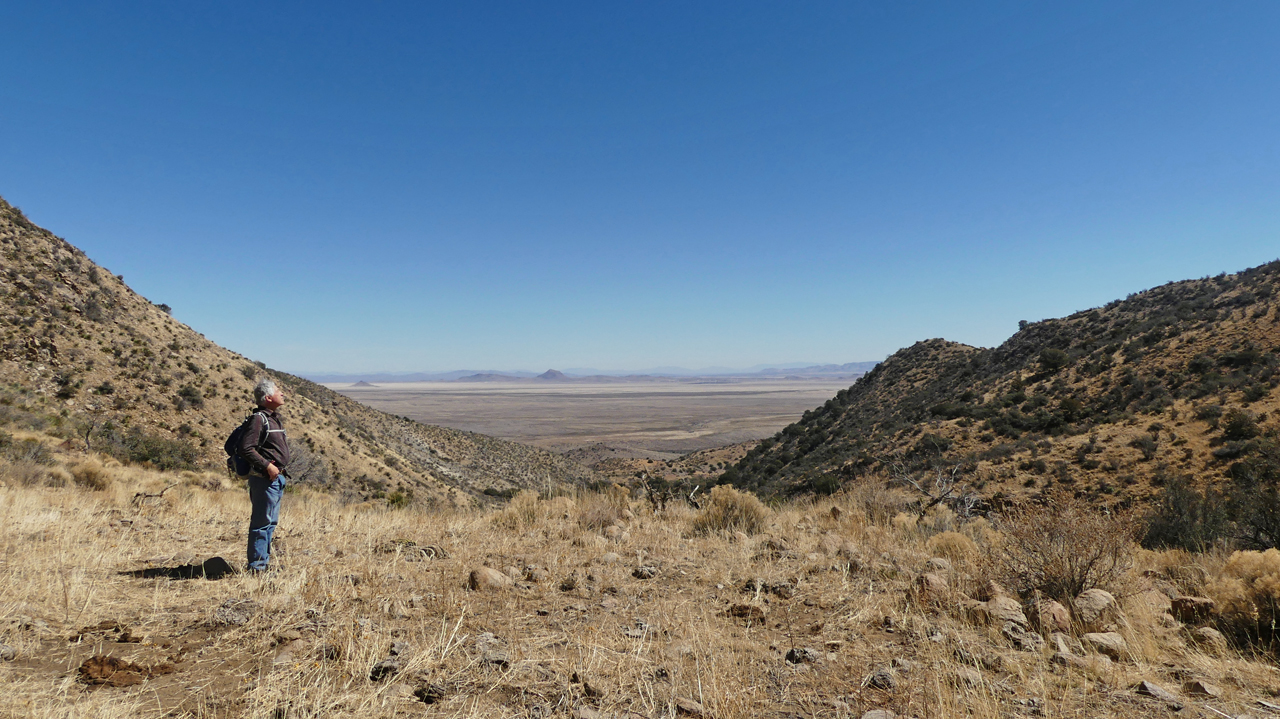 More surprising to us, however, was that the trail was not very interesting. It's just a steep, stony scramble up a bone-dry canyon — few trees, no water, limited views. We were about halfway up when we decided this hike simply wasn't worth the effort. 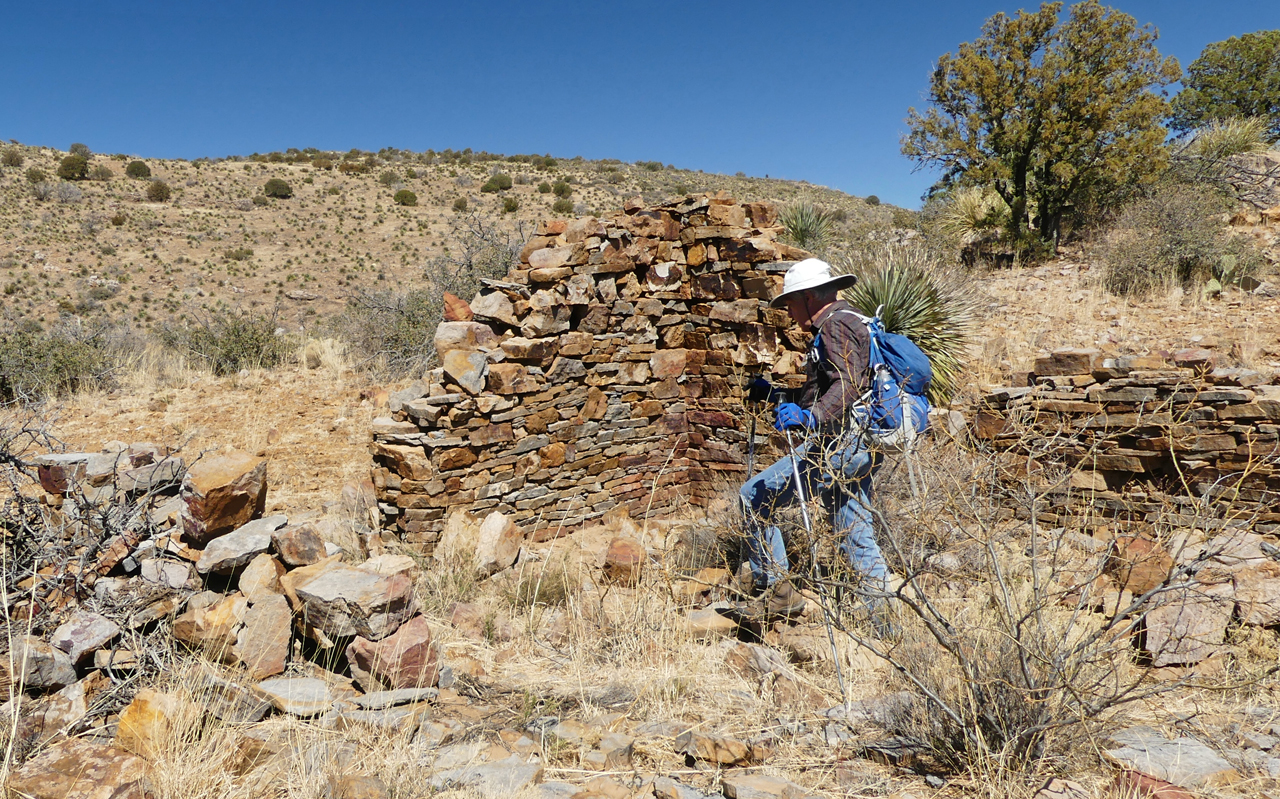 So, we gleefully set off cross-country, up and down ravines and over old tailings piles, to intersect the ill-bred, gawd-awful excuse for a road to Cooke's Town. The wind was howling — playing tunes in the holes of our hiking poles — adding to the feeling of remoteness and desolation. We'd already hiked four miles, it was another three to Cooke's Town, and it was getting late in the day. We never thought we'd actually make it all the way. But we just kept walking ...

Approaching Cooke's Town. The former mining boom town sits in an isolated valley at 6200'. Although it looks bucolic today, there are more than 40 mine shifts and at least two adits in the hills above the town. Established in 1876, it was only after George L. Brooks blazed a road up Hadley Draw in 1882 that it became possible to capitalize on the area's mineral resources.

Reportedly, Brooks hauled out the first load of ore over the narrow twisting road, and before long he had shipped 2,700 tons. The honeycombed, iron-stained ore was 30 percent lead and carried 80 ounces of silver per ton. In later years, concentrators nearly doubled the recoverable lead for each ton of raw material shipped.
— Cooke's Peak - Pasaron por Aqui, by Donald Howard Couchman

By 1890 the Cooke's Peak Mining District was one of the most productive lead producing regions in the Southwest, along with zinc, copper, silver and gold. Cooke's Town was the largest of the three mining camps, and once contained as many 30 permanent structures, hundreds of tents and 16 saloons. 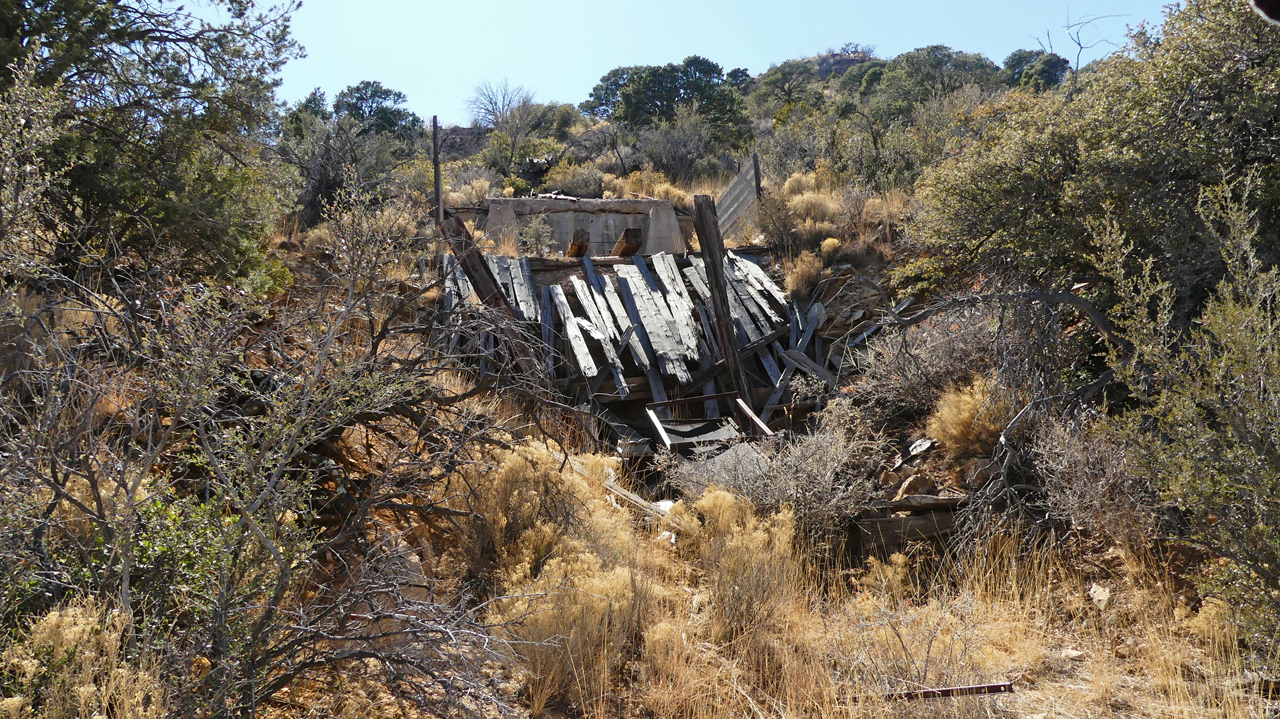 Remains of an adit at the edge of town. 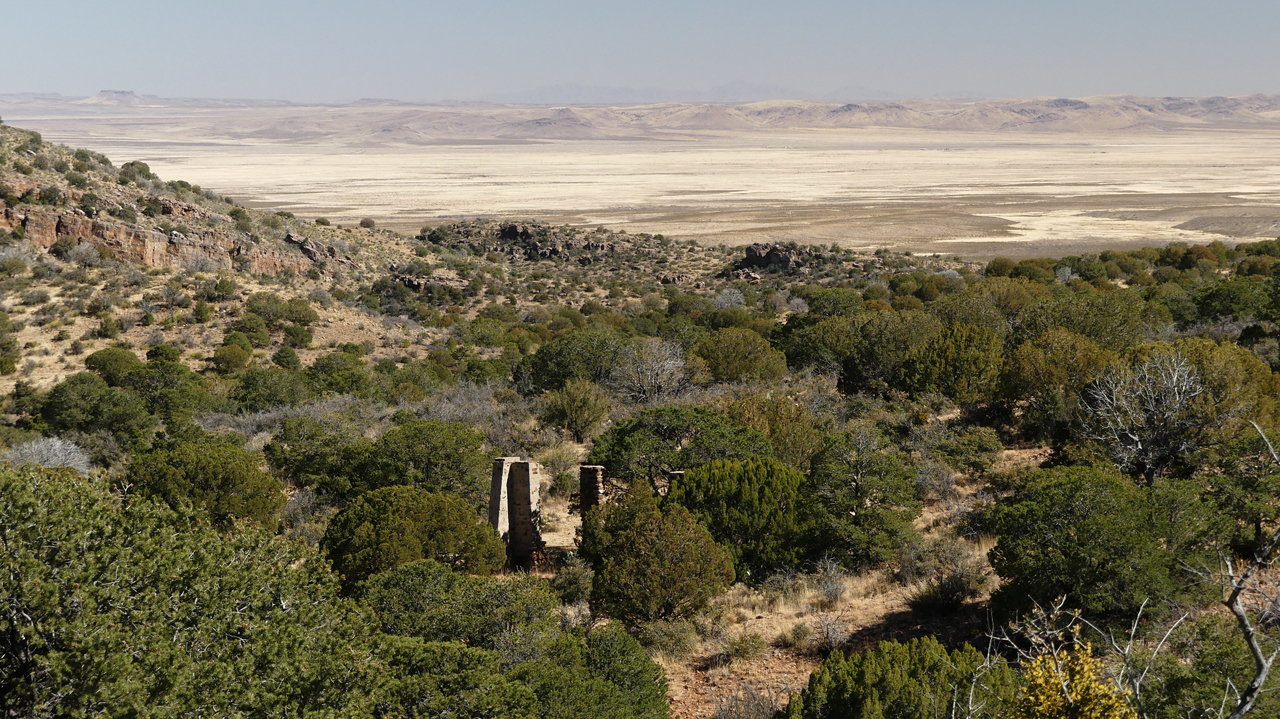 Ruins of a very substantial structure. Could this be the "mill site", shown in the map below? 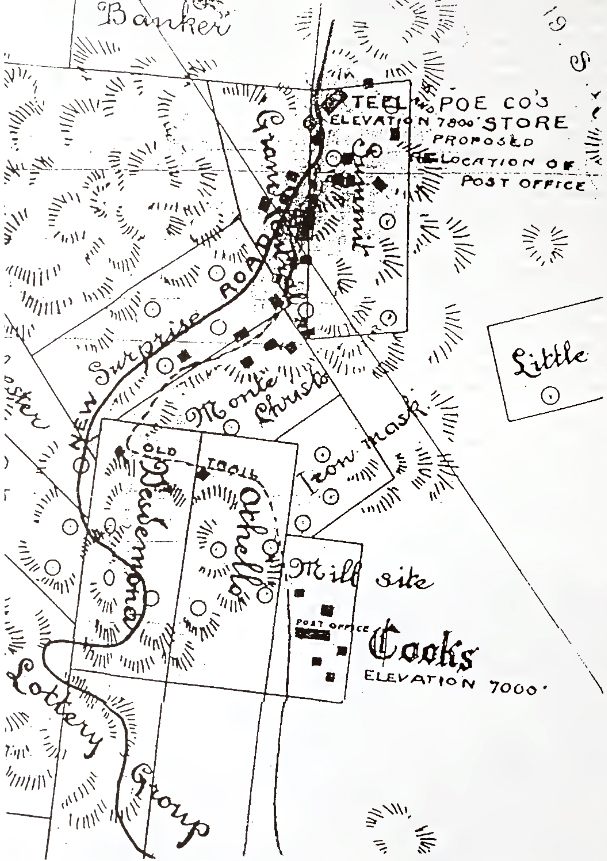 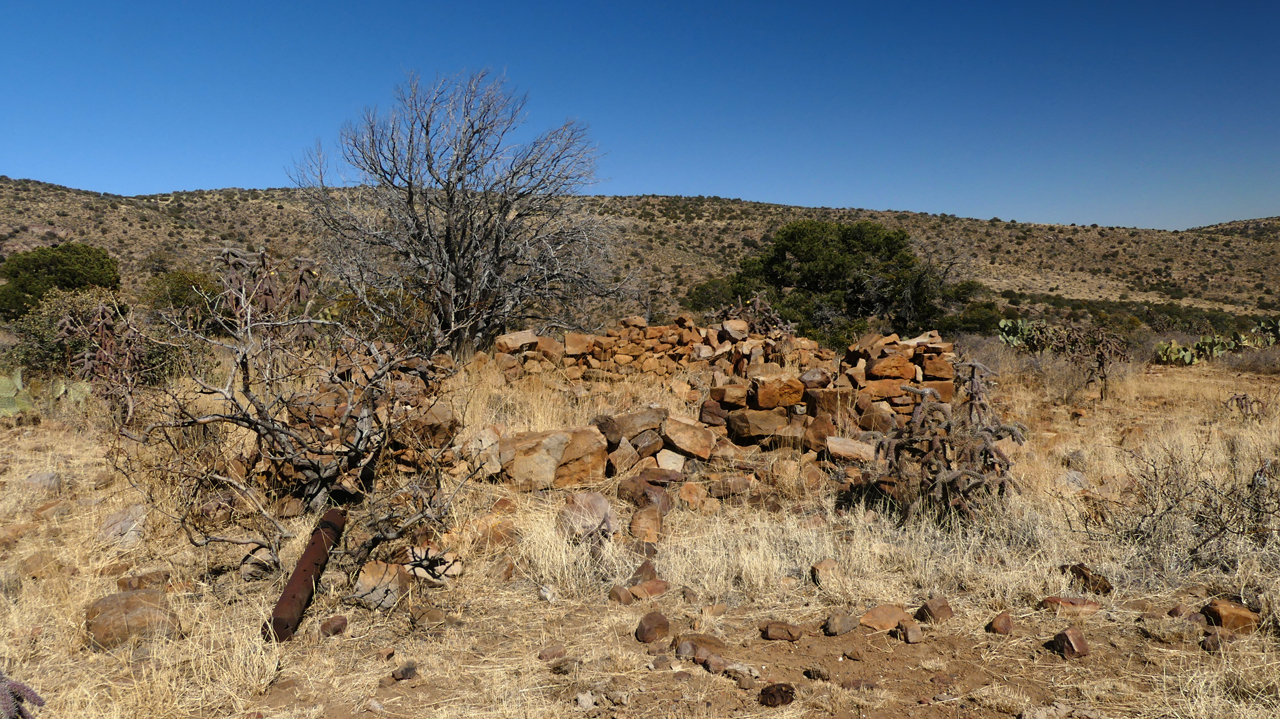 It's true that little remains of what was once purportedly the wildest of western boomtowns. But what a thrill to finally see it after all these years! My obsession with Cooke's Town — also known as "Cooke's Peak", "Cookstown" or simply "Cooks" — began many years ago, when a friend gave me a copy of James McKenna's "Black Range Tales". McKenna paints a hair-raising portrait of a lawless boomtown where he served as justice of the peace. Was there something in the water?

One uncorroborated source claimed that the first schoolteacher, Carl Simmons, was shot twice in the back one night as he entered the building used as his home and the Cooks schoolhouse. Later records name only female schoolteachers.

Another unsubstantiated story concerned an altercation between Thomas Dennis and Joseph Eswell. Eswell advised Dennis that the lard he was applying to his boots would not render them waterproof, whereupon Dennis replied in a distinctively uncivil manner. This led to an increasingly heated exchange during which Eswell threatened to beat Dennis to death with a shovel. A third party broke up the argument, but as Eswell walked away, Dennis drew a gun and killed him. Clearly, this was a case of terminal lead poisoning.

Cooks' reputation for violence (substantiated or not) may be more than the result of a rough western mining town, filled with males with little or no opportunity for entertainment or relief from boredom. The ores they handled were capable of causing some disturbing problems. Lead, especially in the form extracted from the ground at that time, is particularly insidious. The damage to humans can take place in either or both of two ways. The lead-laden dust can be swallowed. In this manner it does not enter the bloodstream quickly, but causes a colic that can be devastating. The dust can also enter the bloodstream more quickly through the lungs, causing lead poisoning.

The many psychological and physiological symptoms associated with less than a lethal dose include irritability and emotional instability. It is not unlikely that lead poisoning, to which all the miners were subjected to some degree, was responsible for at least intensifying the intersocial conflicts prevalent in the camp. Indeed, the 10-year half- life for normal body rejection of accumulated lead may have had a far reaching influence on the physical and mental health of many of the Cooks miners long after they left the camp ...

By his own admission, McKenna was "leaded" while at Cooks. It is not unlikely that lead poisoning would adversely affect a person's memory. This, and McKenna's use of second- and third-hand information, might account for the fact that some of his "tales" fail substantiation in the light of contemporaneous sources. For example, McKenna claimed to have been the postmaster at Cooks and complained bitterly that he could not leave for new prospects until the government closed the facility. The postal records simply do not support his contention. This is unfortunate, because he included three stories of intriguing violence, adultery, and skulduggery at Cooks that would have made delightful repeating, if one could only corroborate the veracity of the source. Whatever the other problems associated with Cooks, failure of the mines was not one of them ...
— Cooke's Peak - Pasaron por Aqui, by Donald Howard Couchman 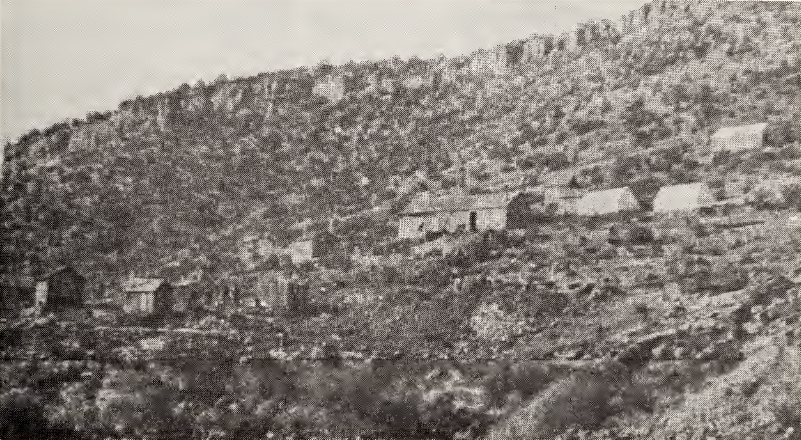 View of Cooks, from the Deming-Luna Mimbres Museum (reprinted in "Pasarons por Aqui"). 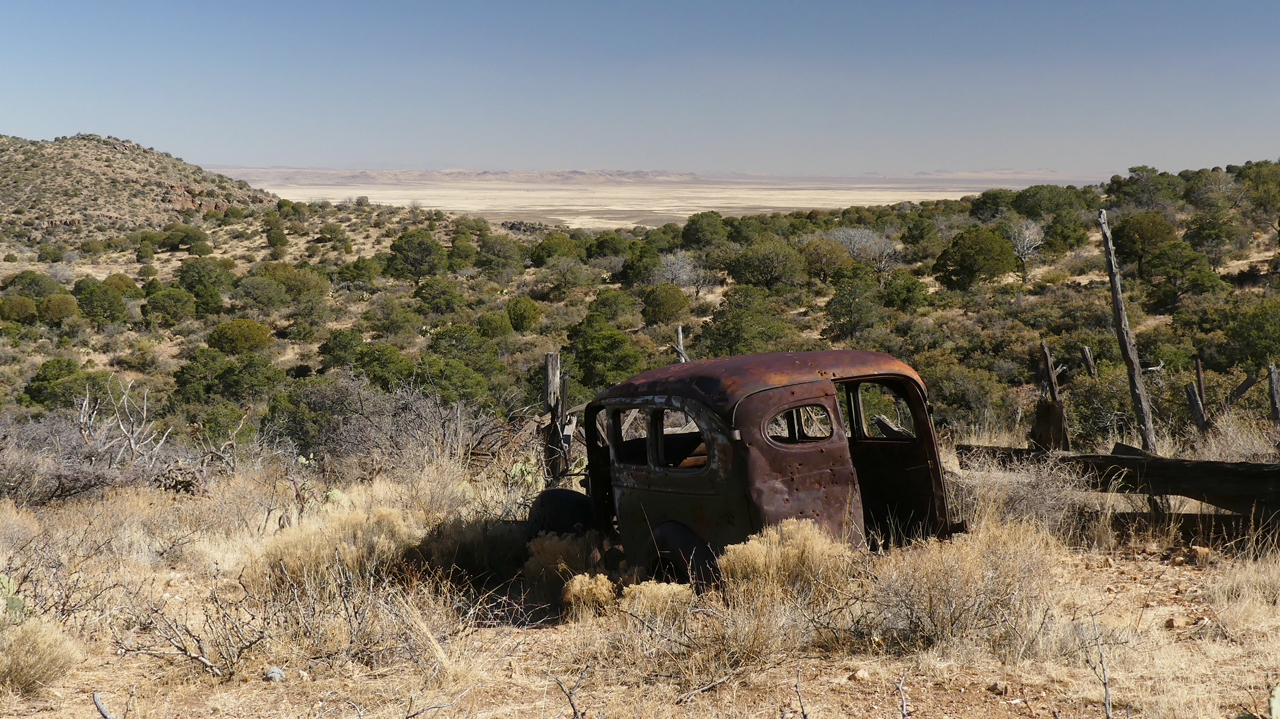 Did this truck get stuck and die here? Or was it pushed over the cliff at the end of its life? 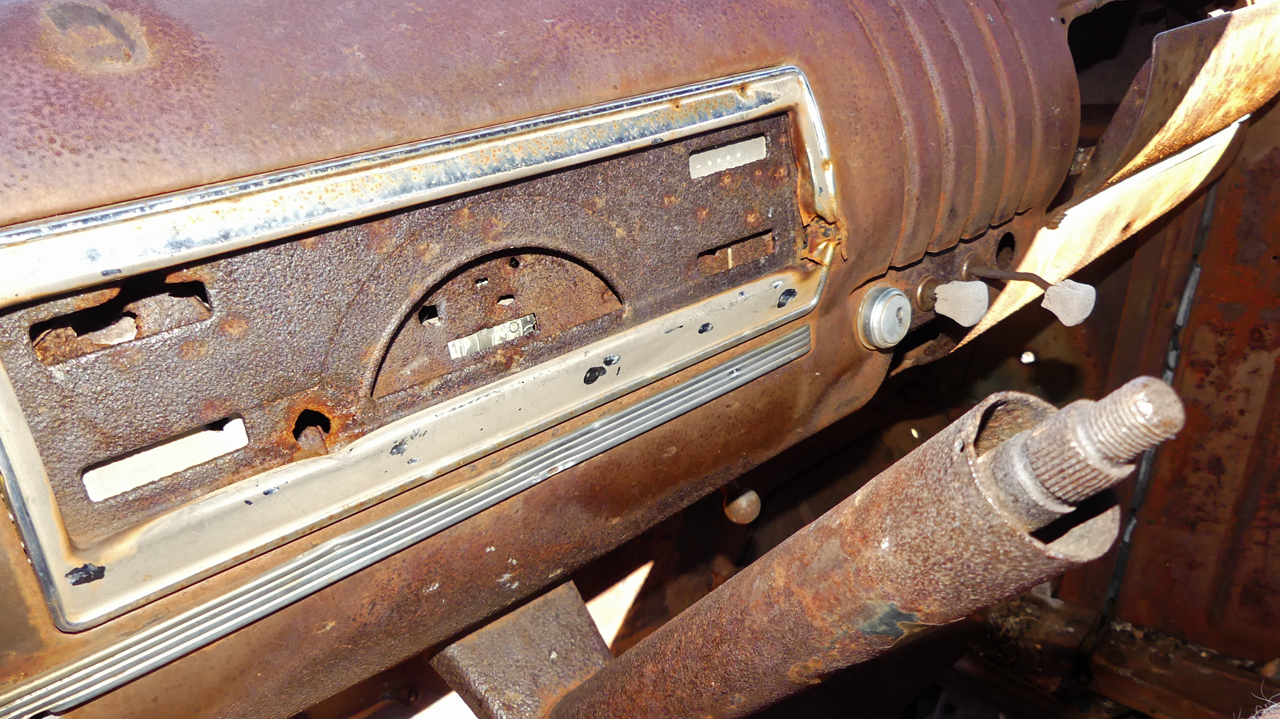 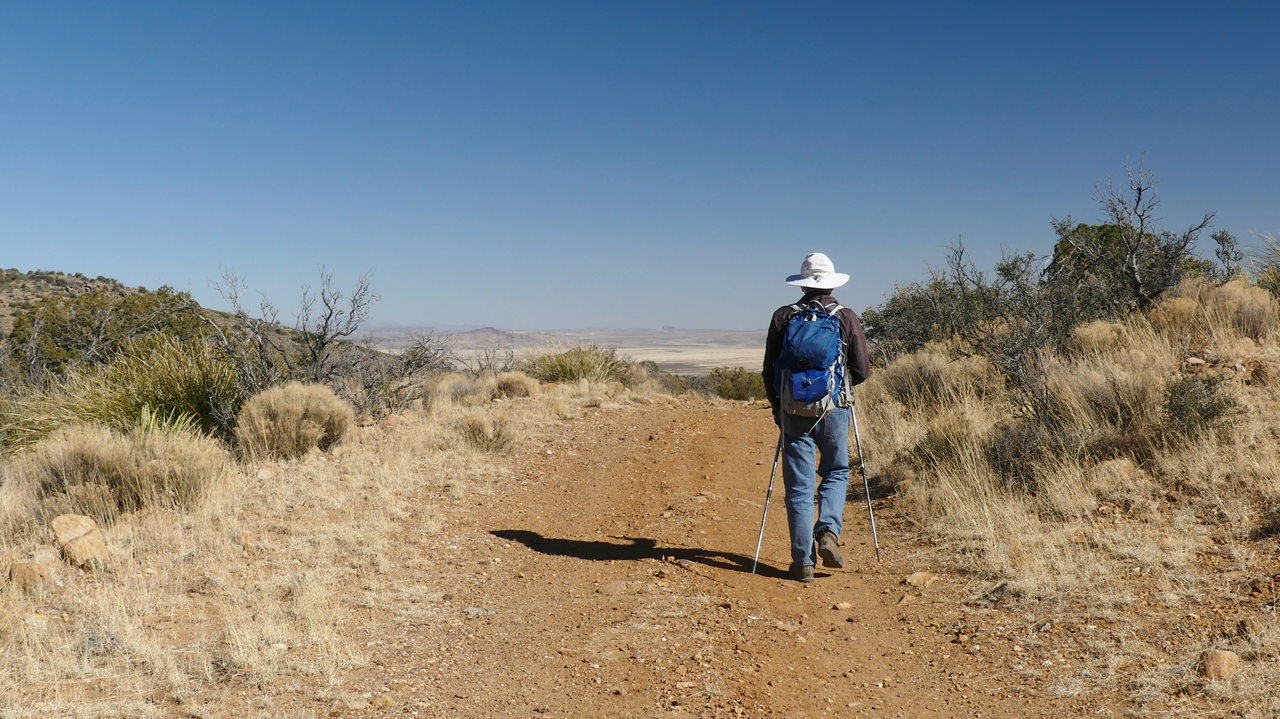 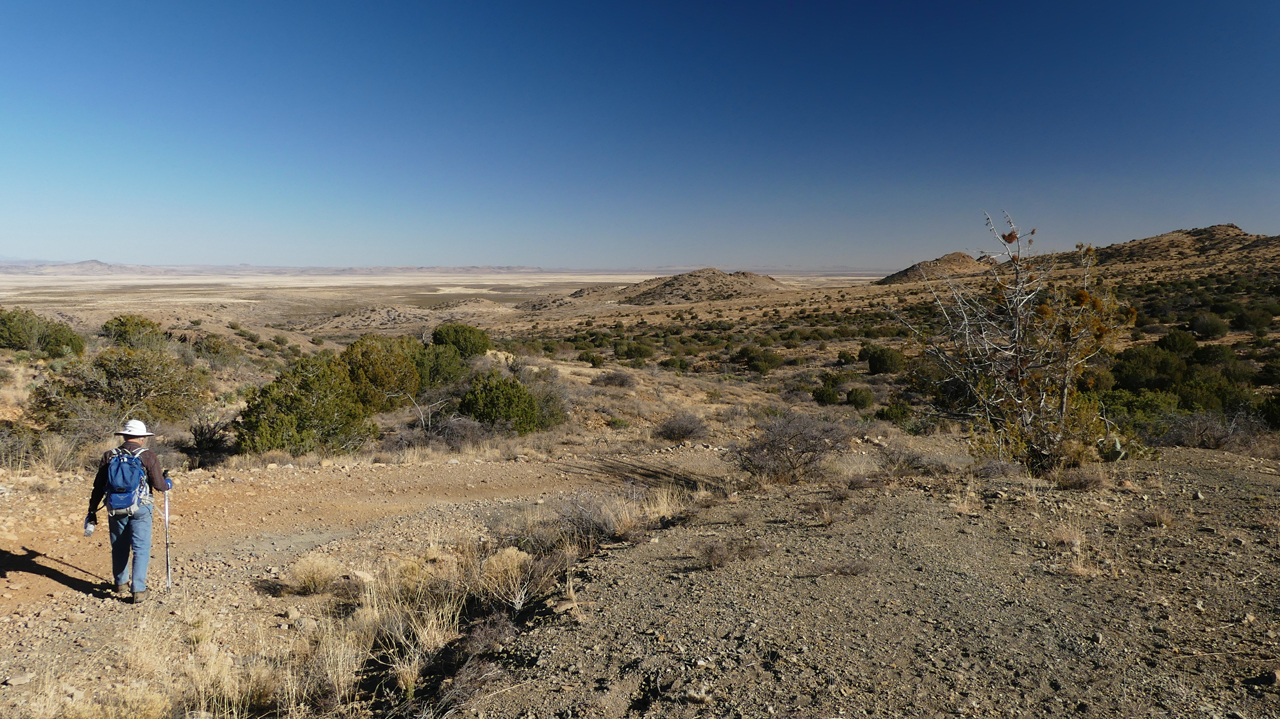 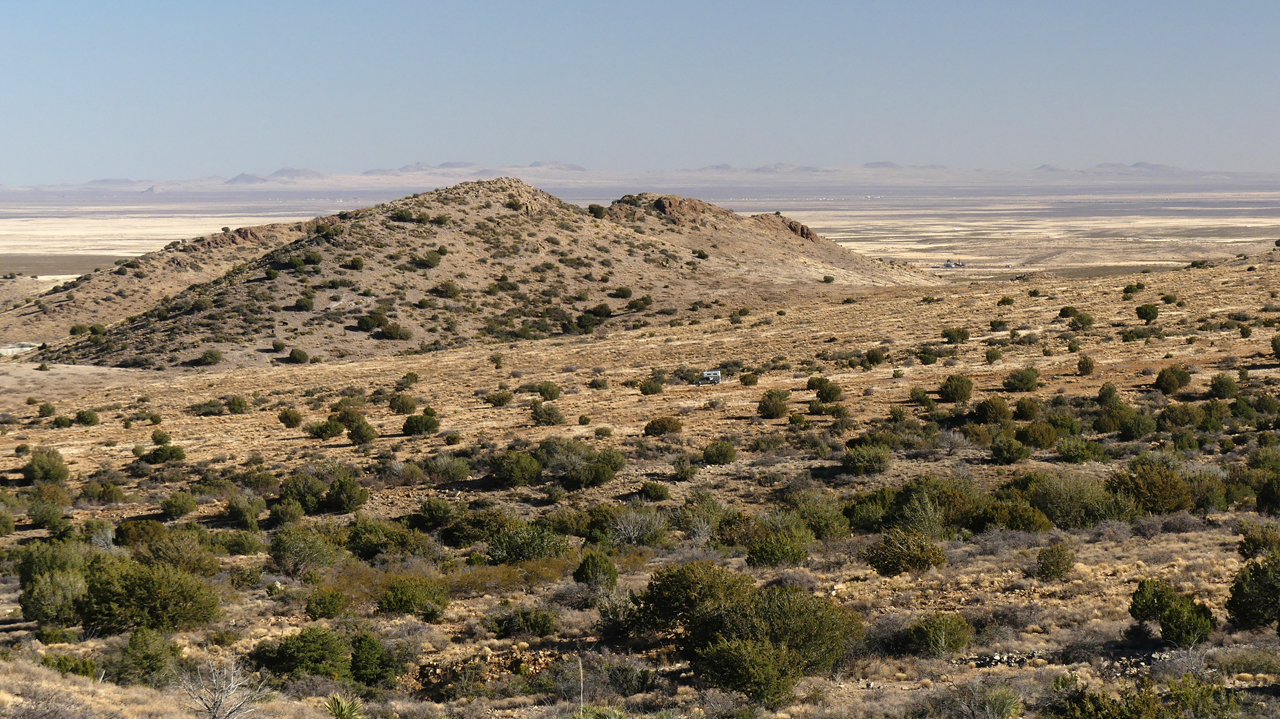 And there's the camper, about a mile away. We were mighty glad to see it! We made it back less than half an hour before the sun dipped behind the imposing silhouette of Cooke's Peak.