In the Mazatzal Mountains near the town of Sunflower, Arizona, lie extensive ruins from several mining operations. The Sunflower mine is well-known and extremely popular with off-roaders, but these hills are riddled with dozens of abandoned mine shafts that are associated with the Cornucopia and Story Mines as well. 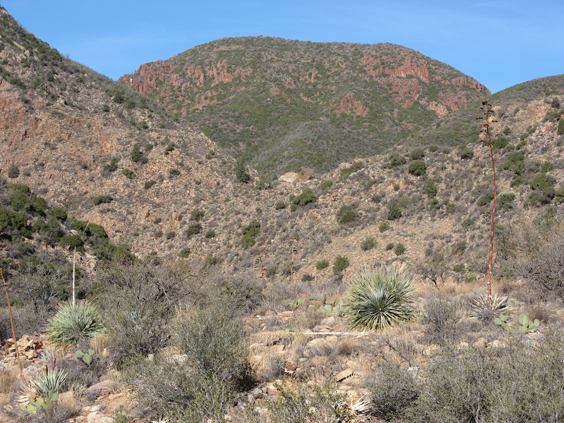 The area is accessed from Route 87 via FR25A, a 4WD road that twists along a steep-sided canyon toward a towering red dome. The mine is on the south flank of this dome, which is composed largely of red jasper and fine books of burgundy slate. The circle shows David's jeep dropping into the canyon. 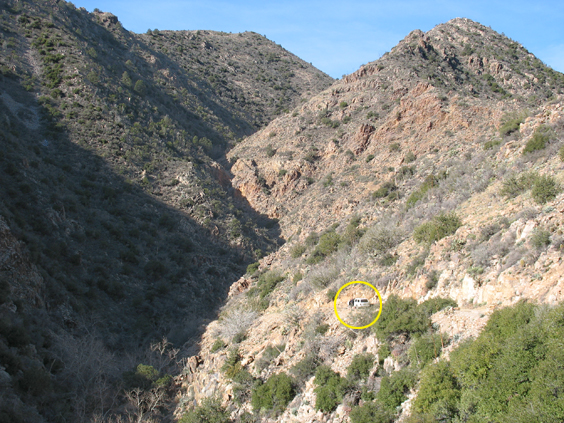 The area was mined from 1911 until the early 1980s, and produced mercury, copper, gold and silver. 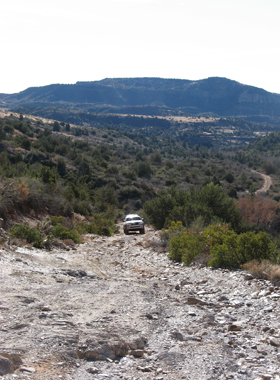 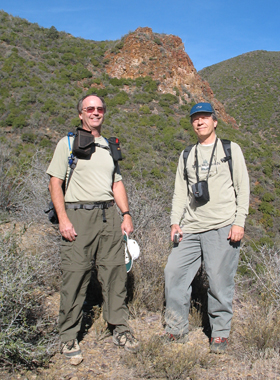 Most visitors to this area come to see the extensive remains of the mercury processing facility. 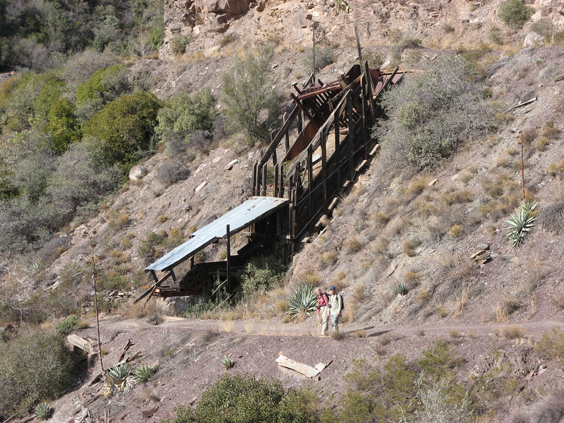 The photo at left shows a large chute that delivered cinnabar ore to a tipple. 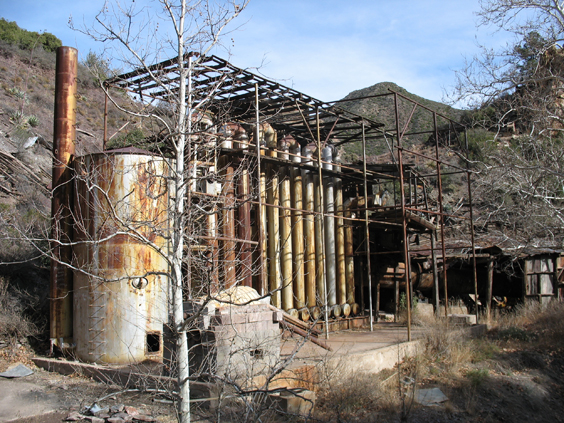 David is a metallurgical engineer by trade, and below is his description of the mercury processing.

The crushed ore first comes into the process in the long, almost horizontal rotary kiln. The rotation keeps things rolling so that all sides of the ore particles are exposed, and the high temperature drives off the Hg as vapor from the cinnabar. The processed gangue would be dumped or carted away. The gas output from the kiln then went through some insulated conical separators to get rid of most particulate contaminants. From there, the gas goes into the sequence of vertical tubes that were probably water-cooled to condense the Hg out and extract the liquid element, plus whatever other elemental traces that came with it. 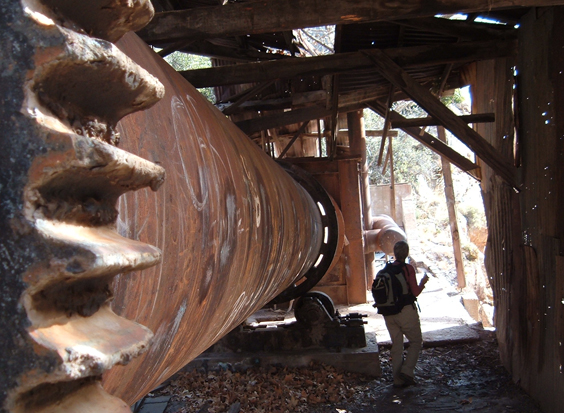 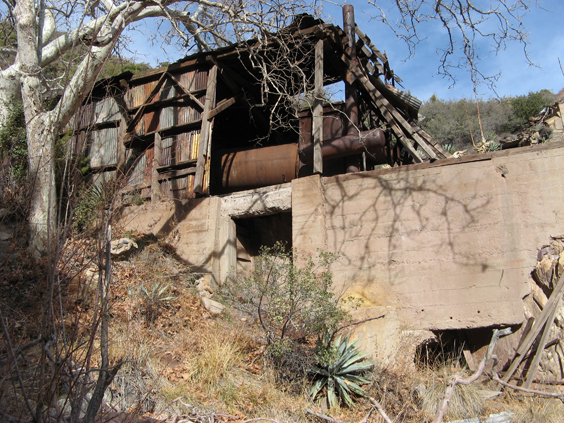 There was a small, second heater and condenser at the site. It was almost horizontal on the right as we walked toward it on the road. This might have been used for some secondary refinement or to test samples of the ore. 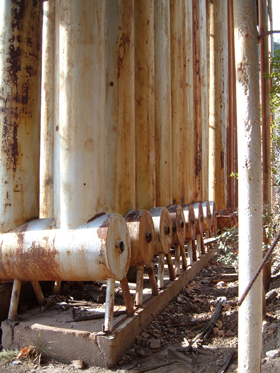 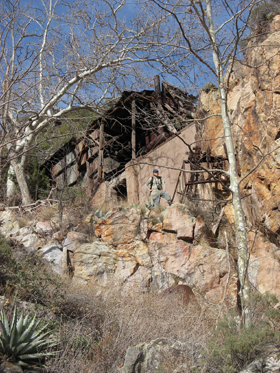 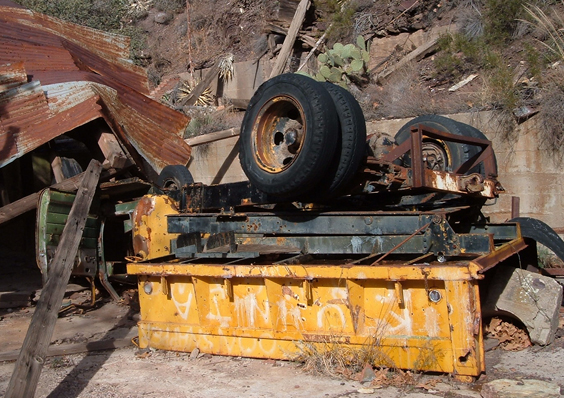 Flat spots on this overturned truck indicate that it was abandoned upright for many years before landing here. A photo taken February 21, 1999 shows the truck upright and intact. Although the Sunflower ruins are still remarkably well-preserved, such mindless vandalism will soon put an end to this fascinating chapter in Arizona's history. 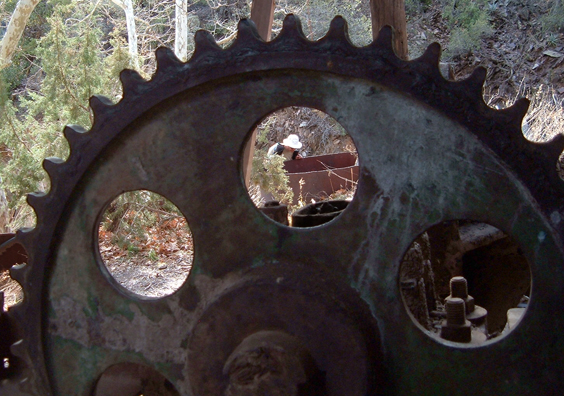 Having left our vehicles at the last stream crossing, we were free to explore the web of old roads and trails on foot. And there was an abandoned mine shaft at the end of every one. 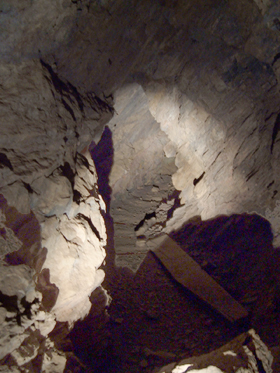 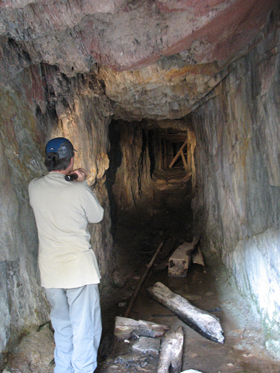 The largest shafts were located just uphill from the processor, in a narrow canyon dusted with snow and exhaling cold, damp air. For more great photos of the mine shafts, visit ironminers.com. 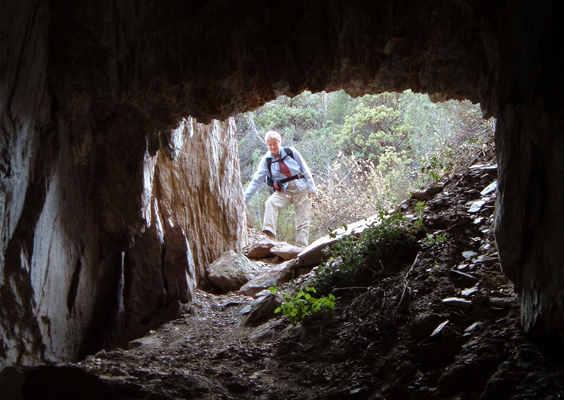 The rocks in this area are extremely varied, from quartz-frosted red jasper to pale green epidote, malachite, sulfurous limonite and the paper-thin slices of lavender and burgundy slate. 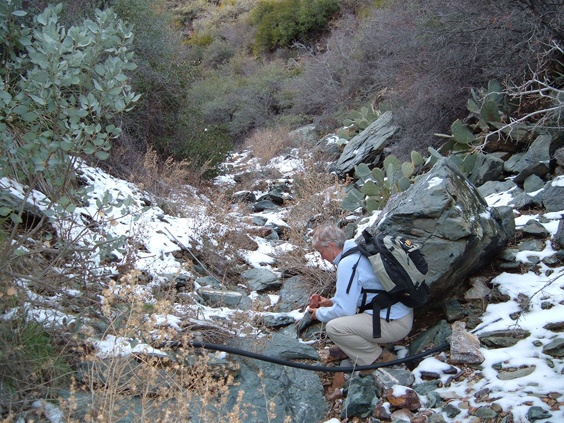 Trucking up the hill for one last overlook. 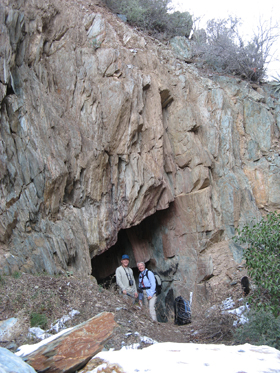 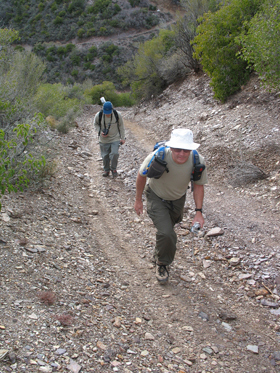 It was worth it. Besides its historical significance, the Sunflower area is remarkable for its jagged peaks and lush high desert vegetation. 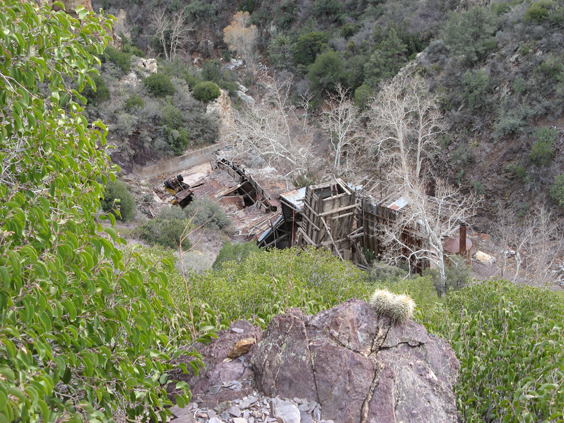 The traditional tailgate party. Chug those beers, boys, while your hands are warm enough to hold them! 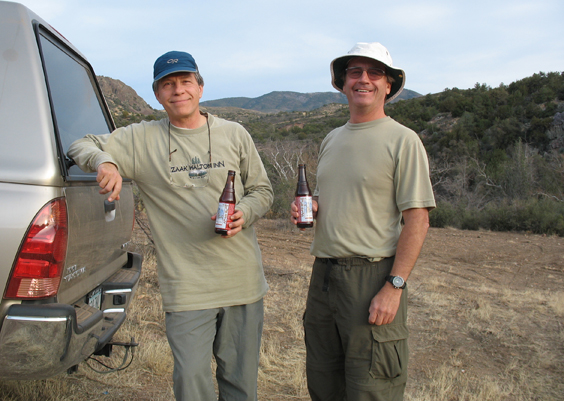 Camping out in style, with a proper meal of curried chicken, rice, chocolate cheesecake and some really good port. 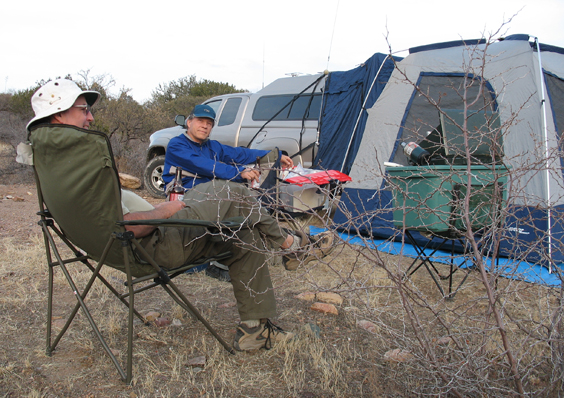 Temperatures dipped to near freezing overnight. But Dennis still cooked perfect pancakes for breakfast. David (wearing clothes and lots of them for a change) demonstrates how to open a bottle of frozen maple syrup. 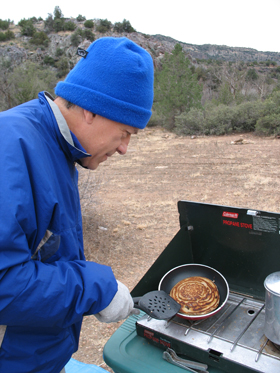 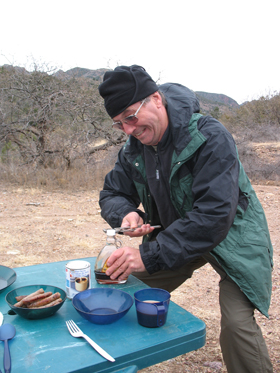 Photos by David, Dennis and Marion