Is there such a thing as a "normal" monsoon? I wonder. The 2006 Monsoon has certainly been one for the record books. It began June 28 -- one of the earliest start dates on record. Then it took a two-week vacation, leaving us with +110° temperatures and suffocating humidity. It came roaring back July 26 with an early morning rainstorm. An unusual all-night rainstorm two days later dropped more than three inches in 24 hours. Then very early the morning of Sunday, July 30, a violent rainstorm dropped another 1.5 inches in one hour. With the ground was already saturated from previous storms, this was the deal breaker causing major flooding all over Pima County. 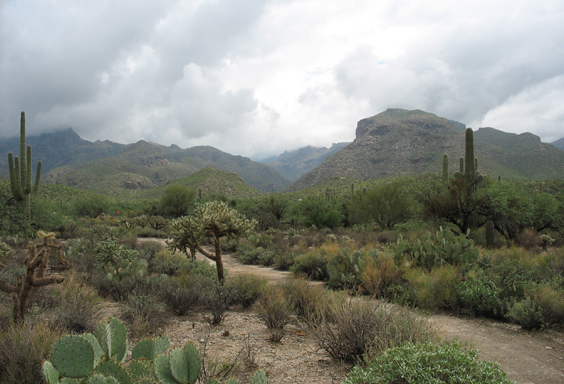 We joined a sizable crowd at Sabino Canyon the morning after the storm, reasoning that for the first time this year we might be able to go for a dip in one of the many pools in Sabino or Bear Canyon. But the pools weren't just full, they were overflowing. Bear Canyon was closed completely and the Sabino Canyon tram was only running as far as Stop 2. 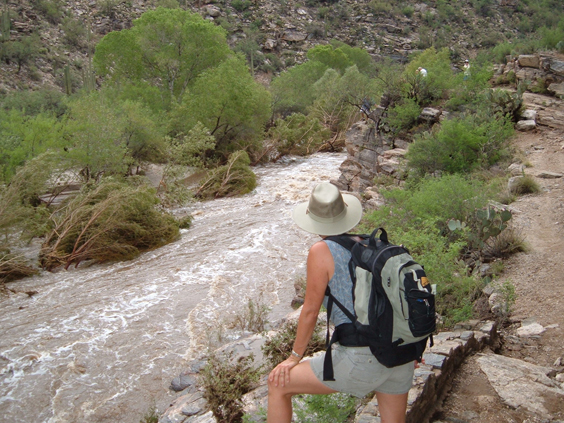 Thanks to a tip from a helpful ranger, we headed up Sabino Canyon and split off at the Bluff Trail. We could hear the roar of the falls from the top of the first rise, and a close look at the stream made it really, really clear that we wouldn't be crossing the creek to hike to Seven Falls that day. 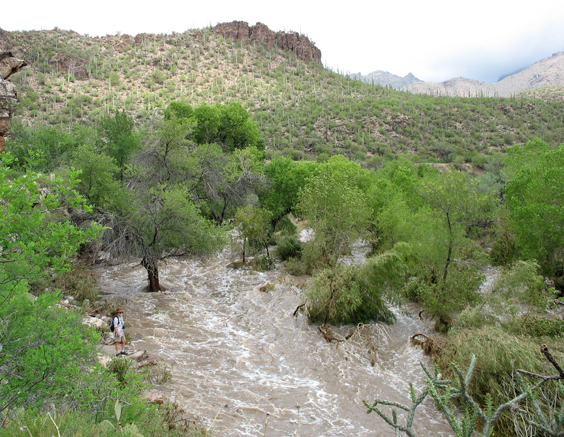 This is the most water I've ever seen in Sabino Canyon, although one of the rangers said he's seen it higher ... in 1983. 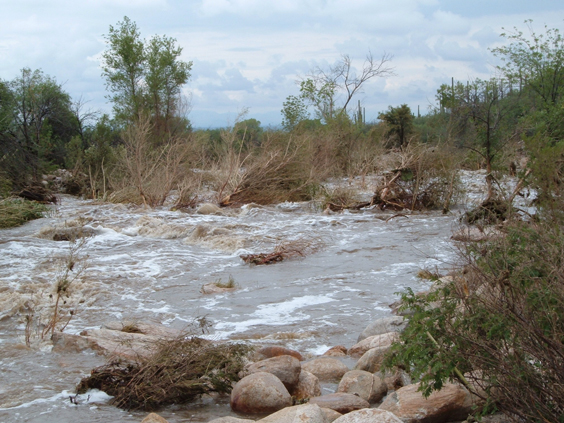 The picnic tables beside the dam are buried in several feet of wet sand, and floodwaters were lapping at the edge of the restrooms. 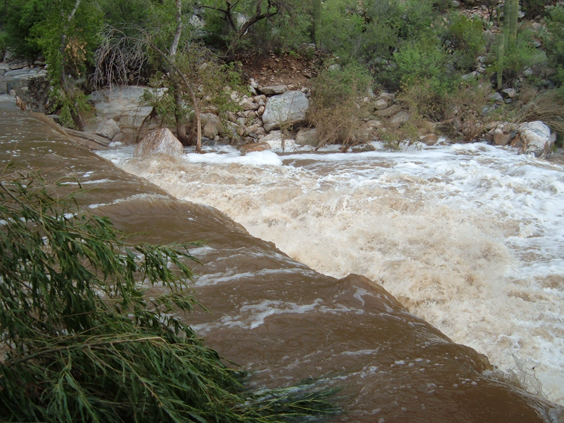 The water was well over the Bear Canyon Road at both bridges. 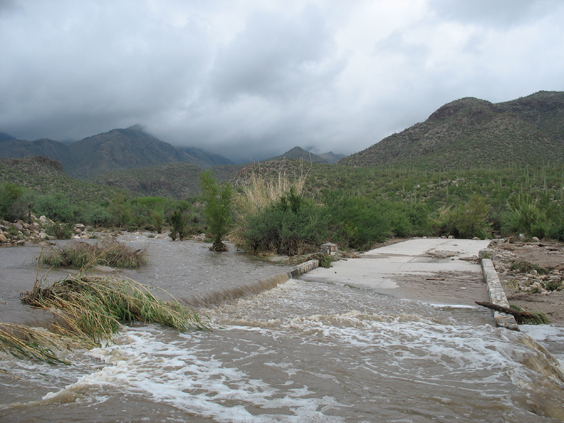 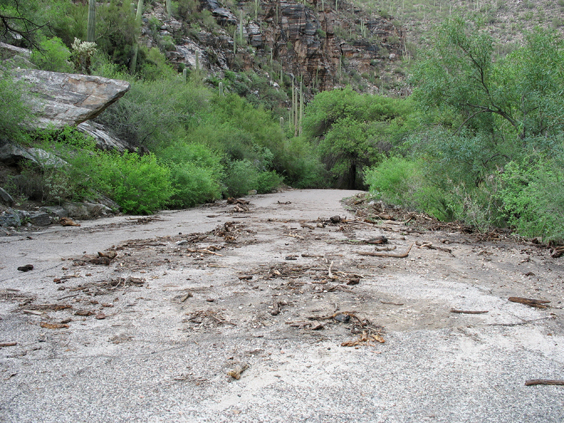 A new sign suggests an alternate route to Phoneline Trail. 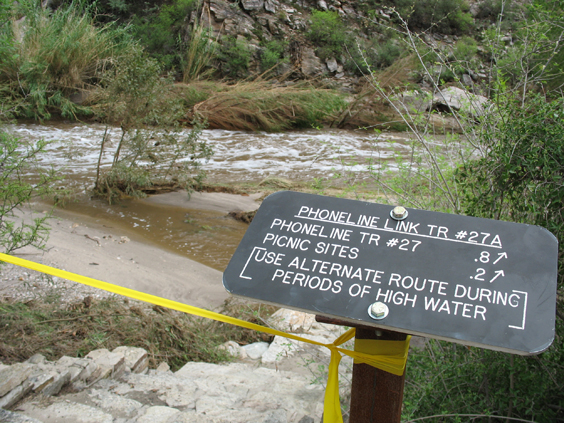 Here's the bridge at Stop 2, with at least two feet over water roaring over the top. 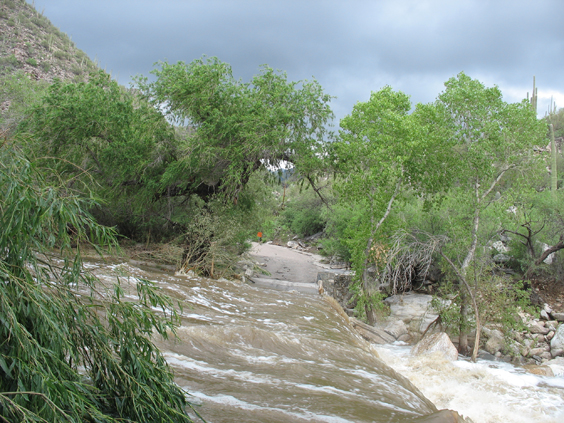 Looking up the canyon from one of the picnic areas, now buried in a tangle of brush and mud. 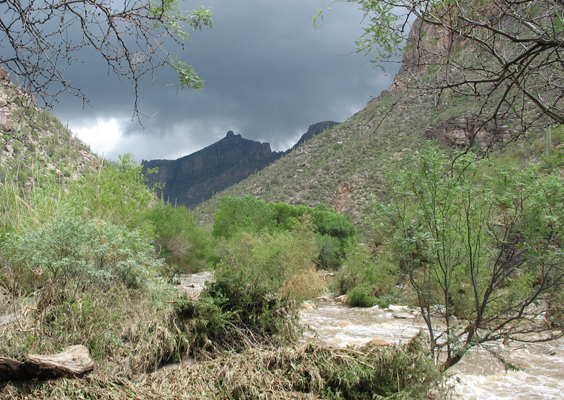 The storms turned down the heat to a mere 70 degrees, but with 80% humidity. The drops of water on this cholla are not rain, but sweat.

b>When the chips are down, the ants team up to tow them back to their nest. Watch for this photo on a new "Successories" motivational poster. 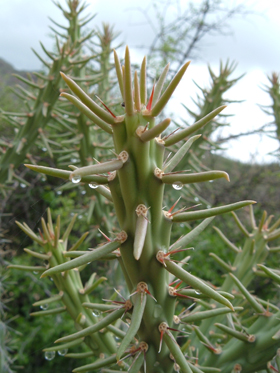 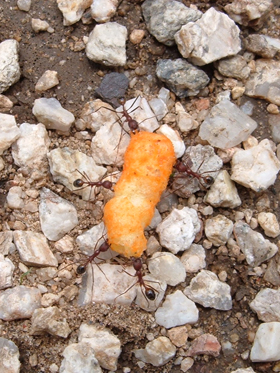 The barrel cacti wait for the very warmest weather to reveal their fabulous fiery flowers. 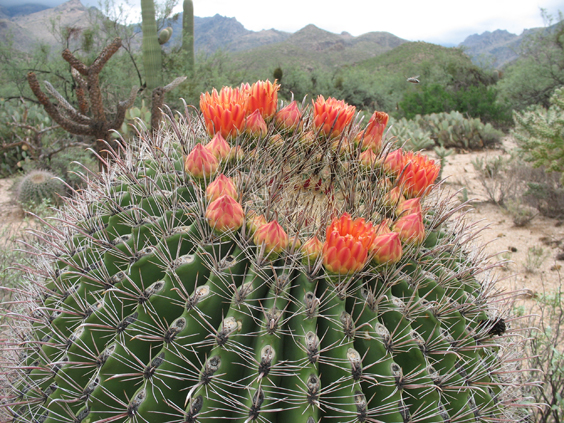 The unusual weather also brought out some great critters including this roadrunner. 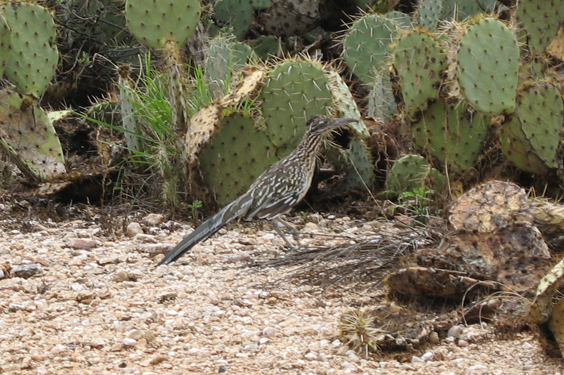 But the biggest thrill of the day was spotting a BOBCAT right beside the trail less than a half mile from the Visitor Center. 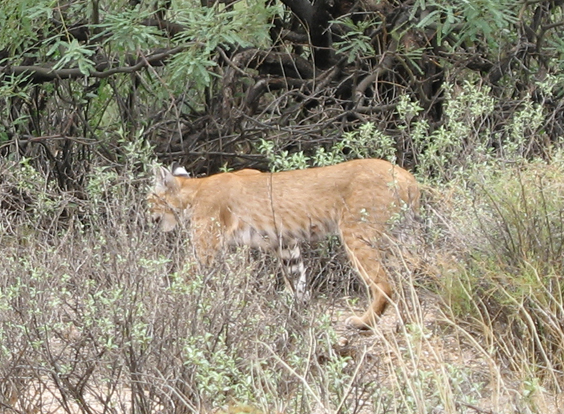 I am lucky to have met so many Sonoran Desert natives on the trail including Gila monsters, coatis, ringtails, scorpions and lots of rattlesnakes. But in all these years, after all these hikes, this was my first bobcat. 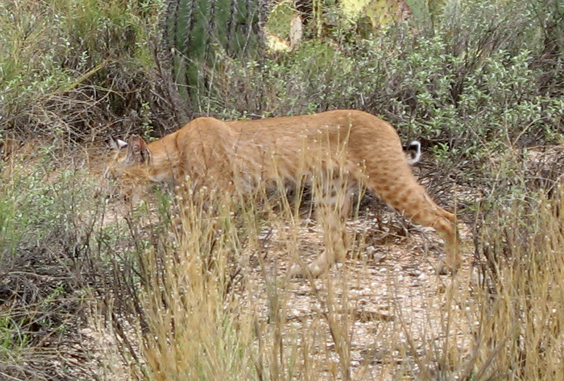 He was a looker, not much larger than a house cat, but with black-tipped ears and black-and-white spots decorating his inner thighs and belly. He trotted along a short distance from the road, mildly irritated but not at all fearful, and tolerated several photos. 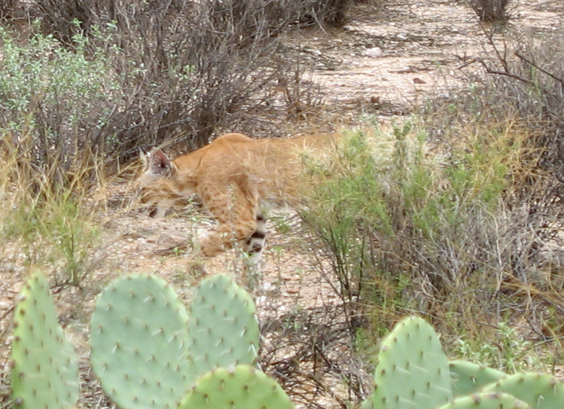 We'll return to Sabino Canyon as soon as the water is LOW enough for a dip!