Over Thanksgiving weekend, we decided to see how many hot springs we could visit in the thermally blessed region that stretches from the eastern foothills of Mount Graham to New Mexico's Gila Wilderness. The first stop was Thatcher Hot Well, a converted stock tank at the foot of Frye Mesa, through a fence and past several "No Trespassing" signs. There was less trash than normal and some lovely new orange vinyl lounge chairs. 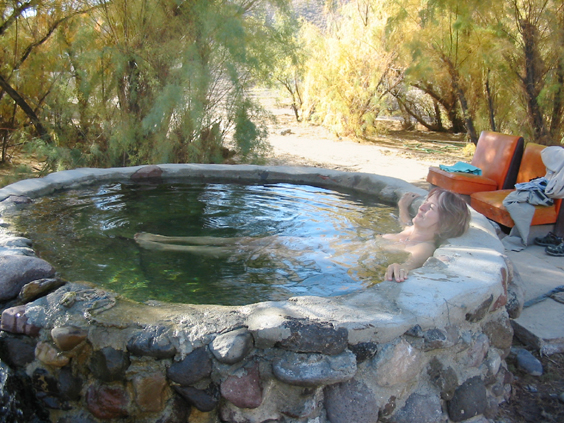 We followed the Black Hills Byway, the old road from Safford to Clifton constructed by prison laborers in the early years of this century. The road took us past some important mineral deposits where we saw so many fragments of white quartz "frosting" that it looked like someone had spilled several thousand bags of marshmallows. Otherwise this road winds through rather bleak over-grazed range country watered with 38 miles of pipeline and graced with merciless views of the copper mine in Morenci. 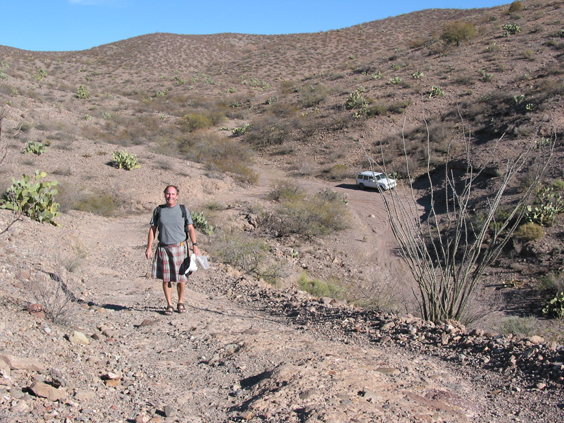 Our objective was Gillard Hot Springs, one of Arizona's hottest (180°F) and most remote springs. The "road" was unmarked and quickly deteriorated into a faint track across the desert. Large sections have been erased by floods and we were able to continue only by detouring through the washes. 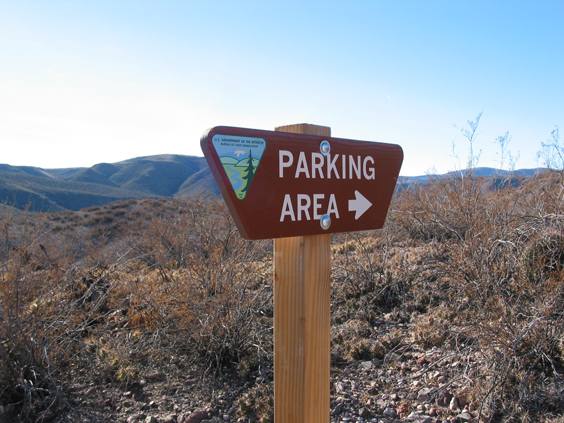 There were some ATV tracks but no car tracks besides ours (yipes!). Several times we considered turning back, but according to Dave's GPS we were within striking distance of the springs. The road ran out abruptly in a steep wash, and we followed a track down to the river, cutting across the desert to avoid a washed-out bridge. Inexplicably, the Forest Service had placed a brand-new "Parking Area" sign well past the end of the road. Suddenly we dropped out of the desert of blackened volcanic stone and glimpsed the Gila River, shimmering between 100-foot-high cliffs and lined with brilliant yellow cottonwoods. A flock of ducks took flight as we approached. 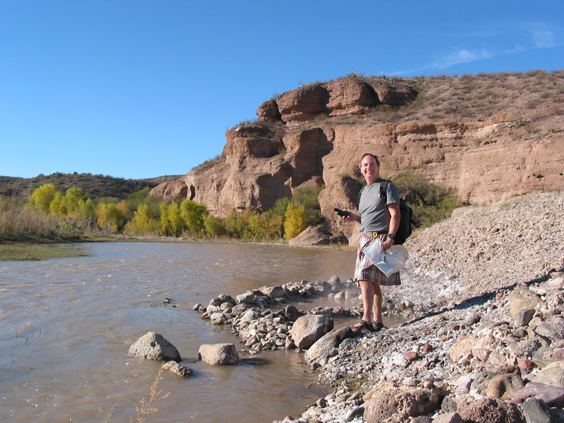 The GPS kept track of our progress: 80 meters, 50 meters, 30 meters ... and then we saw the puffs of steam rising from the springs on the banks of the river. 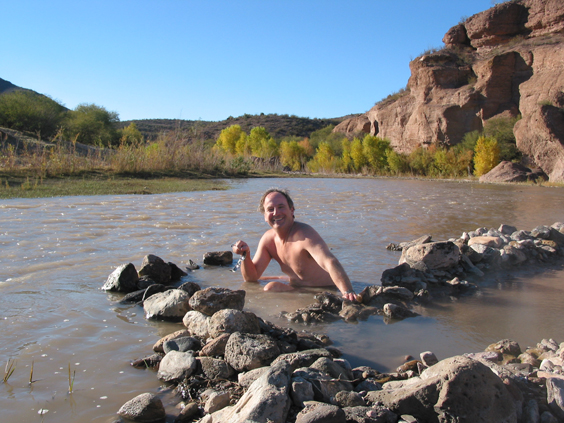 The mud percolated like my camping coffee pot. A poached crayfish testified that the water was indeed boiling, and some engineering was required to mix in enough river water for comfortable dipping. 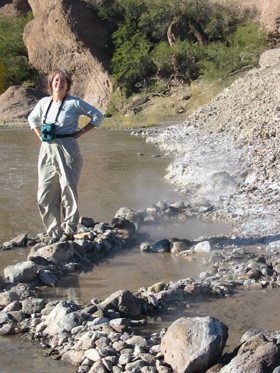 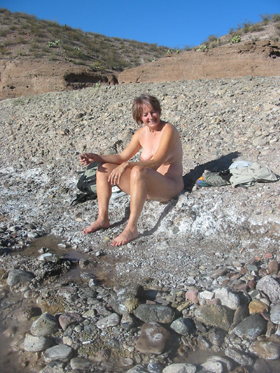 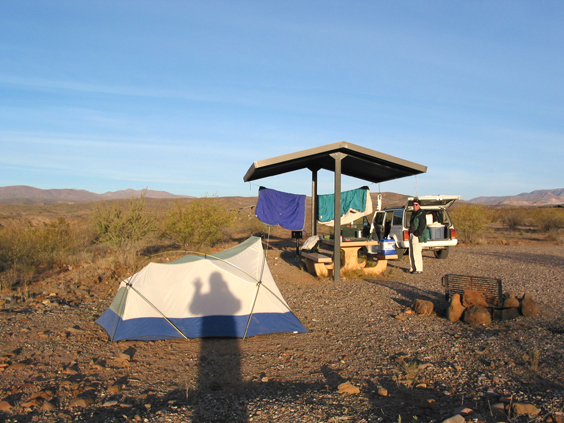 We camped that night at a new campground on the banks of the Gila just above the bridge, which was lovely if you can sleep through the constant explosions at the mine. Temperatures dipped a bit lower than expected, and we awoke to frozen water and plenty of ice crystals on the tent walls. 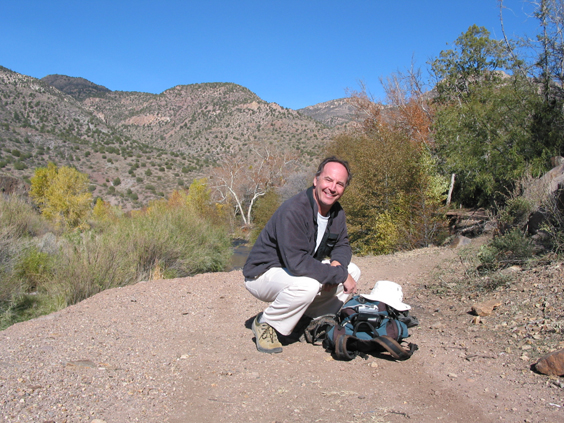 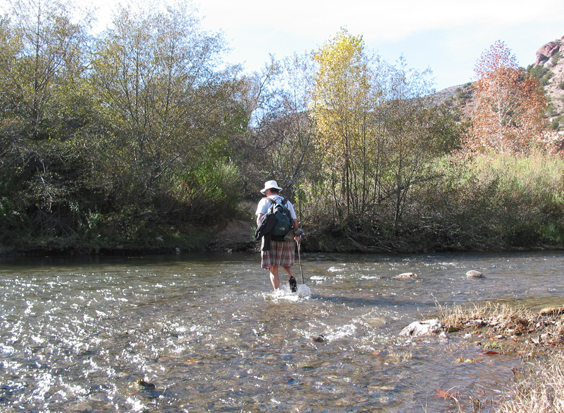 We completed about half of the three-hour trek, following boot prints in the mud between towering red cliffs and gold-leafed cottonwoods and sycamores. There were numerous stream crossings, and the water was GLACIAL. 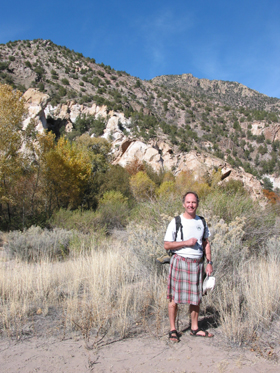 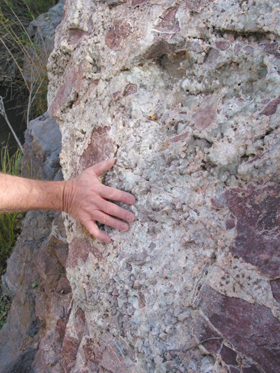 While avoiding one crossing, we discovered a vein of magnificent magenta and pale green fluorite. 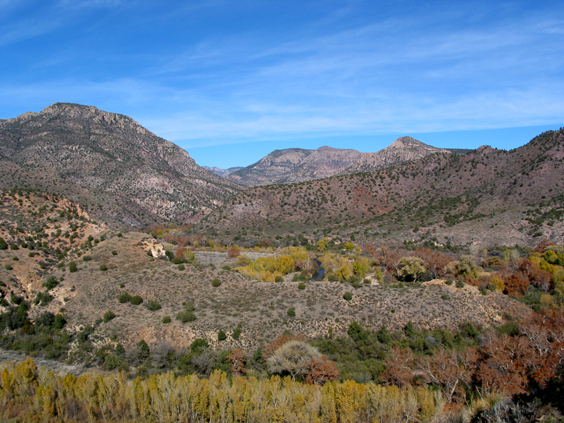 Here's the view climbing out of the Gila River Valley (from the passenger's side, one cheek hanging over a 2000-foot drop, nails digging into David's thigh). 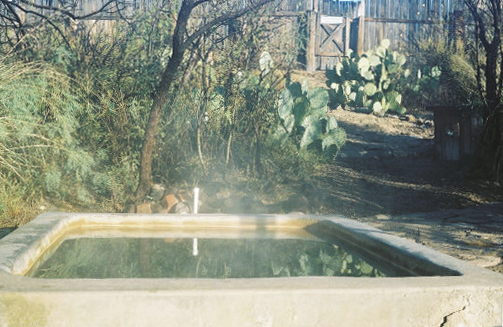 Our reward that night was a quick run to Faywood Hot Springs near Deming, New Mexico, where at last we could soak to our hearts' content in steaming spring