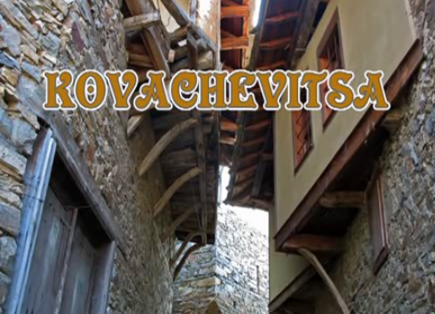 If your browser can't play the video, download the MP4.

We didn't expect to get to Kovachevitsa at all, but when our host's son was reluctantly volunteered to drive us there, we jumped on the opportunity. This village is famous for its tall stone-and-wooden houses, and many historical epics have used as a backdrop. Kovachevitsa is 18 km up a winding mountain road that has only partially recovered from massive floods in 2006. On the far side of the Mesta River Valley and just a stone's throw from the border with Greece, this part of Bulgaria feels like part of the Meditteranean village with its low, dry hills and bustling markets and cafes.

We strolled around Kovachevitsa for a while, and added to our growing collection of prestilkas — colorful hand-embroidered aprons — but were far more interested Gorno Dryanovo, a Pomak (Bulgarian Muslim) village which ekes a living from nearby tobacco fields.

If we'd had more time — or a less sullen driver — we could have visited the nearby ruins of Nicopolis ad Nestrum, once a staging point on the Roman road from Constantinople to the Adriactic. Or the village of Leshten, population 35, where enterprising Sofiski are restoring and renting out some of the old houses, and the local pub is famous for its homemade rakija. The nearby Kanina River gorge is home to a 3000-year-old former Thracian temple as well as thermal hot springs with baths dating back to the Roman Empire.