The National Festival of Bulgarian Folk Art was founded in 1965 by the then-Communist government of Bulgaria in order to preserve traditional music and folklore. With the exception of 1971 and 2000, the festival has been held every five years in the village of Koprivshtitsa in the Sredna Gora Mountains. Performers are selected from regional festivals all over Bulgaria, so the three-day festival showcases the best of the best. I haven't found any statistics on attendance for 2010, but in 2005, there were an estimated 15,000 performers and 250,000 guests.

The festival has been dubbed the "Burning Man of Bulgarian Folk Music", but it's more like Mecca. Every devotee of Bulgarian folk music and culture needs to make the pilgrimage at least once.

For Susan, Barb and I, 2010 was the year. Since all three of us are essentially planners by profession, the logistics were more intriguing than daunting. We decided early on that we would ignore all the advise and warnings from the experts and travel independently using public transportation and making our own arrangements for rooms, meals and excursions.

Our three-week tour was nearly one year in the planning, and included side trips to the Kaba Gajda Festival in Gela, Bulgaria, as well as Kardzhali and Perperikon, Plovdiv, Bansko, Rila Monastery and Sophia. 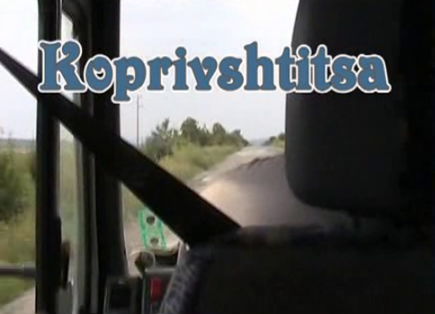 If your browser can't play the video, download the MP4.

Two of our favorite performances at Koprivshtitsa were reenactments of traditional Bulgarian weddings by folk ensembles from Gotse Delchev and Yambol.

The performances portray elements of a traditional ceremony, many of which are described in a book entitled, “Bulgarian Folk Customs” by Mercia MacDermott.

On the Saturday night before the wedding, the bride's hair is braided by her mother. The bride sits on a rug strewn with bobbins of yarn (the more bobbins, the more children), while her girlfriends sing sad songs about the end of the bride's life as a single girl. When the braiding is complete, a white kerchief — a present from the bridegroom — is placed over the bride's head, and she would stand up and kiss the hands of her sisters, brothers and girlfriends. They lead her into the courtyard to dance the horo until the arrival of the bridegroom's procession.

Meanwhile at the groom's house, the groom is shaved, and the hairs are carefully collected, wrapped in a cloth and given to his mother. Great pains are taken to ensure that none of the hairs are scattered, since they could be used for spells to harm him.

On the day of the wedding, the groom, along with the guests, proceeds to the best man's house, accompanied by musicians. An ambulance passes by, sounding its siren (at least in the video from Yambol).

Barley is poured over the groom’s head to protect him from evil spirits, rifles are fired into the air, and the groom receives the blessings of his parents. After a lot of hard bargaining, the bride's parents sell the groom a decorated with a wreath of popcorn and chili peppers. And yes, that's a live chicken!

The bride takes leave of her family and stands facing east, and one by one, her father, mother, brothers and sisters approach her. She bows to each one, kisses their hands and gives them shirts, socks and other presents.

The crazy woman with the hatchet may be charged with the destruction of the wedding tree, or, she may be the zalozhnik shouting out and recording the wedding gifts by making notches on a beam. 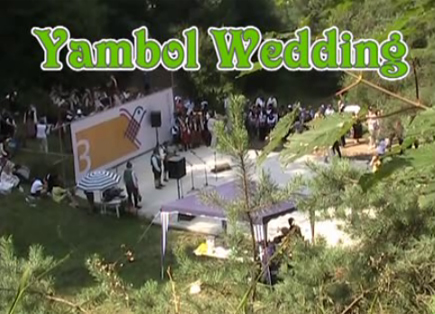 If your browser can’t play the video, download the MP4 here

It was the group from Gotse Delchev reduced us to tears. Their youth, the purity of their voices and obvious enthusiasm for the subject erased the stage and made us all guests at an actual wedding. Notice that the chorus sings almost non-stop for 14 minutes, and how skillfully they share a couple of microphones! And those COSTUMES! It’s why we came halfway around the world to attend this festival.

If your browser can’t play the video, download the MP4 here

These videos were shot with a camcorder the size of a kevapche, poised on my knee and aimed between the heads of other spectators but with that beaudacious 41x zoom.