How I Became the Cat Mother of Coronado Heights

When I first moved into my house I had a steady stream of four-footed visitors. So many cats came by that I eventually started making notes about the "sightings:" 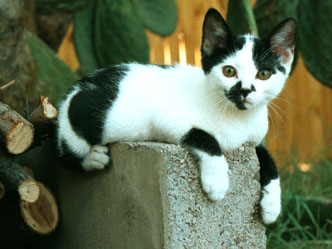 I stopped counting at 24. Each of my guests sat on the porch, wrapped his tail around him in the proper cat fashion, and stared at me expectantly. Later I learned that the previous owner of my house was a recluse who fed all the stray cats in the neighborhood. Well that explains the mountain of cat do in the back 40.

Then one night the neighbor girl, who drops by from time to time to pet the cats and roller skate in my house (why else would I have hardwood floors?) showed up my doorstep. She just rang the doorbell, passed me the cat, and disappeared! I was left holding a robust black-and-white shorthair with Charlie Chaplin markings.

"Okay," I said. "I'll give you food and water, but you can't stay in the house." So he curled up on the bedroom window sill and cried himself to sleep. I got up three times in the night to make sure he was okay. Next morning, I tore the place apart looking for him, only to discover that he had taken refuge in the crawl space under the house.

He kept me company all day while I dug up the backyard, tossing and catching a clump of caliche, the white-and-black hardpan that's the bane of Tucson gardeners and landscapers.

The name -- and the cat -- stuck. Caliche won his shots and his squatter's rights, giving spotted tomcats a 3/4 voting majority in my family. 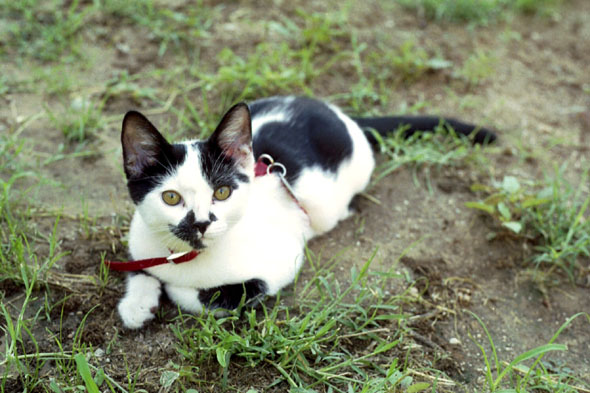 
Total unofficial cats who just stop by to eat and spray our front door: 24 (and counting)