In the summer of 2003, the Aspen Fireconsumed +80,000 acres of forest and cloaked the Tucson Valley in acrid brown smoke. The monsoon can't come soon enough. We were desperate for water, and there's an ocean of it just south of the border.

Our plan was to head straight for the ocean and then make our way south from Caborca along the Sea of Cortez, over rough backroads via El Desemboque and Puerto Libertad to Bahia Kino. But a computer crash kept us waiting half a day for a car permit in Sonoyta, so we decided to spend the night in Puerto Penasco and try again the next morning.

I've had an aversion to Puerto Penasco (alias Rocky Point) ever since a wrong turn left me stranded in a sea of puking, falling-down-drunk Gringo coeds in the old port. But PP at midweek in midsummer is frequented mostly by Mexican families on holiday, and we found a pleasant, inexpensive and blissfully quiet motel with a tiled veranda overlooking the harbor. 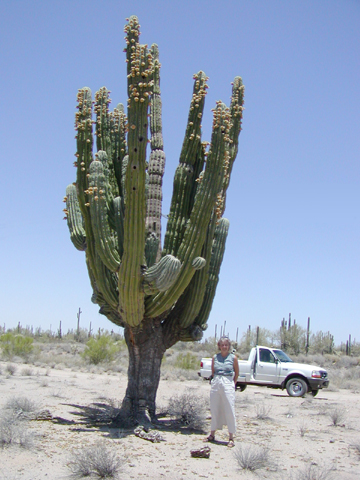 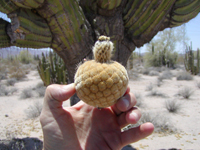 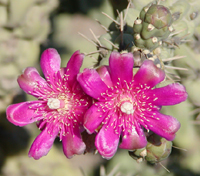 Early next morning we were finally running the coastal road from Puerto Penasco to Caborca. East of town the gated Gringo compounds continue until the beach gives way to a massive salt flat. But if the ocean disappointed, the cacti were always thrilling. The giant cardons were loaded with furry brown tennis ball fruit. 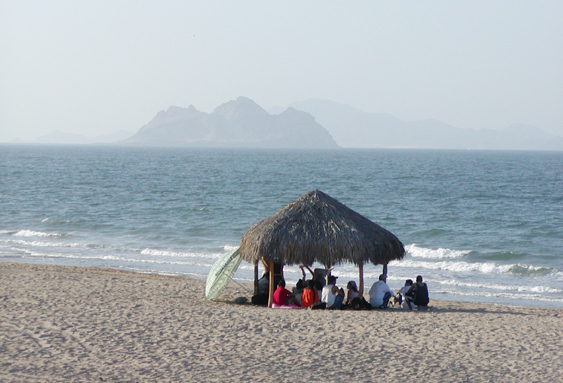 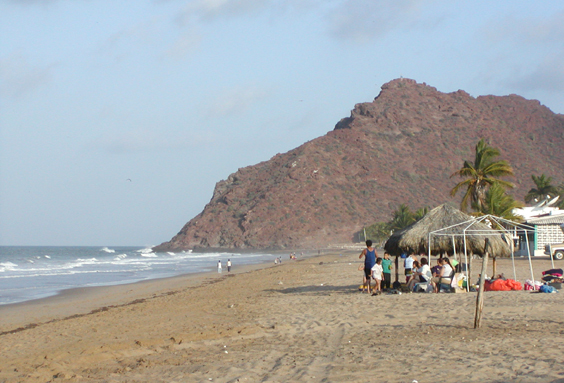 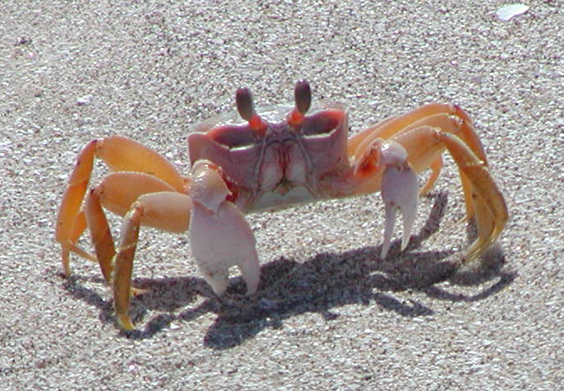 The best show in town was the sideways shuffle of these tiny crabs. Translucent white by night and orange by day, they could fly down the beach with astonishing speed. When they tired of their camera-toting fans, the larger crabs would raise a single claw in a kind of a one-finger salute and stand their ground. 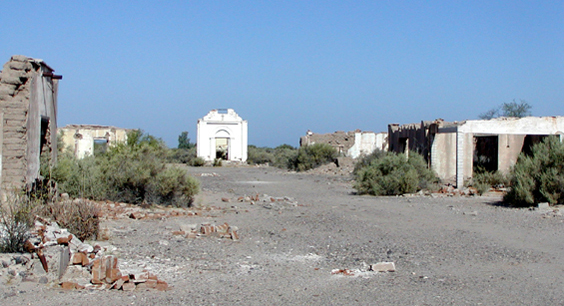 Meanwhile, two crazy Tucsonans set off in search of mythical Playa San Nicolas, rumored to be one of the most pristine beaches on the western coast, and accessible only via a rugged gravel road. Finding said road barred by a very large gate, we tried an end run via the town of Bella Vista. 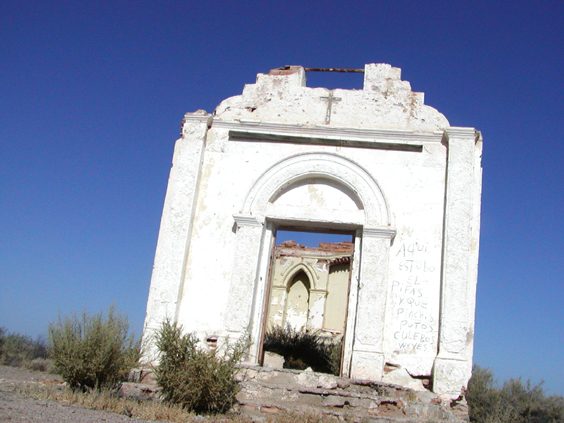 No beach here, but this ancient adobe ghost down lost in a wide salt flat made quite an impression on us. 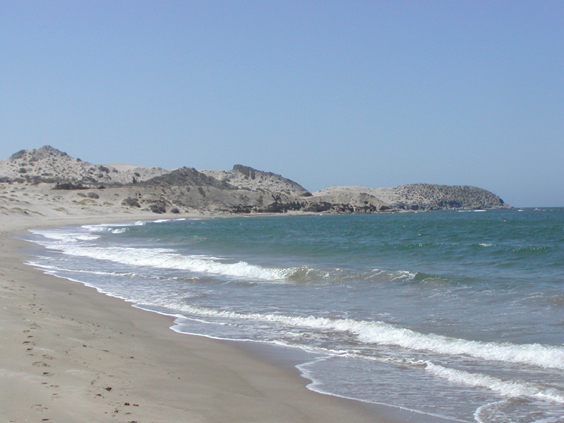 Back at the gate -- still very convincingly locked -- we followed a faint track two miles to a junction with an impossibly good gravel road. It led, of course, to the future site of Luxury Beachfront Homes. The dunes had been scraped bare, but the beach was still lovely, and we had it all to ourselves. A dust storm blew in while we picked our way some 20 km back to the main road, obscuring all but the dirt track wandering through a dense cardon forest. 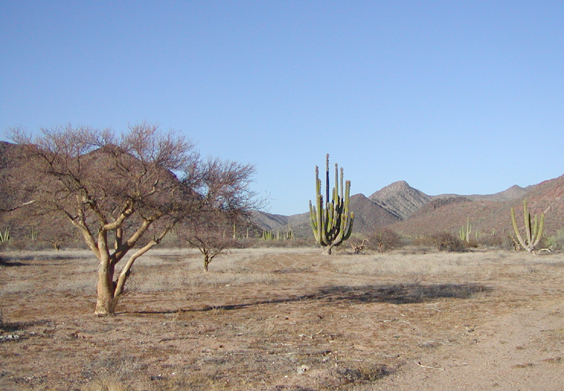 After a most welcome siesta, we wandered north along the coast all the way to Punta Chueca on the Seri Indian Reservation, to see what this desert looks like far from Gringolandia. 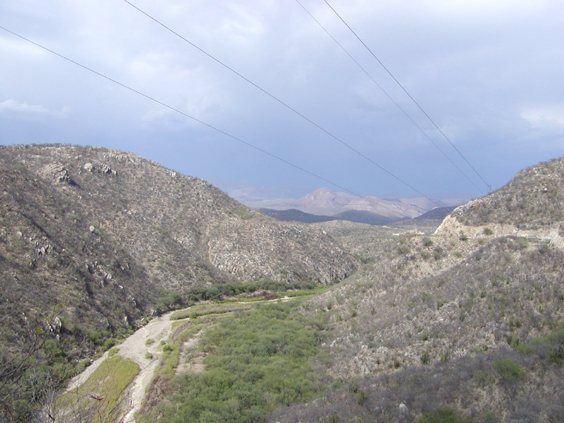 Next morning we backtracked through Hermosillo, and followed Highway 17 northeast to the junction with Highway 89. The road climbs steadily into the Sierra Madre Occidental. This is rough and rugged high desert country, but the valley is surprisingly lush and green. The rich farmland and well-kept villages of the Sonora River Valley were a refreshing change after the dreary, dust-blown barrios of surburban Hermosillo. 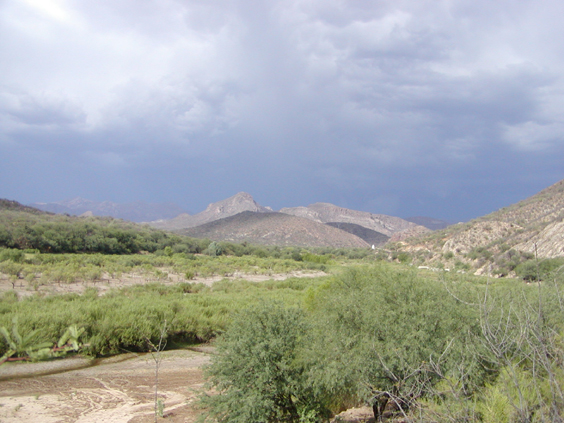 Near Mazocahui, we caught up with the leading edge of the monsoon. The indigo sky rippled with pink heat lightning, then unleashed a torrent of dust and fine hard rain. 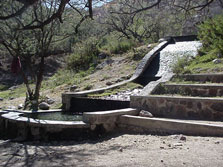 Our destination that night was the hot springs six miles west of Aconchi via a spirder's web of gravel roads. I'd read several glowing reports in various Mexican travel guides, so I was a little shocked to find the grounds deep in garbage and human waste. The springs themselves are still very appealing, consisting of a network of cascading canals and steaming caves that recall an ancient Mayan shrine. But the lower tubs are filthy, the restrooms unspeakable, and, since the gate is unlocked, party-goers arrive by the truckload after dark. It was a very short hot night in a tiny backpacking tent recently vacated by a surly rattlesnake.