Hiking and Hot Springs in Jacumba

When friends Jeff and Julia said they'd like to celebrate the new year with "hiking and hot springs", we immediately thought of two resorts near Jacumba, California, that we never managed to visit on our previous trips to Anza Borrego. Dennis and I left a day early, and spent a night at Margie's Cove in the Sonoran Desert National Monument.

The reviews of this place are terrible! "Nothing to see but cactus", "waste of time", "great place to get abducted by the cartel". It's true, if you can't stand pristine Sonoran Desert, with desert pavement from horizon to horizon, scoured by washes of impossible depth and lushness, and surrounded by mountains of rumpled rhyolite that turn fire-red at sunset, you should definitely stay away from this place! 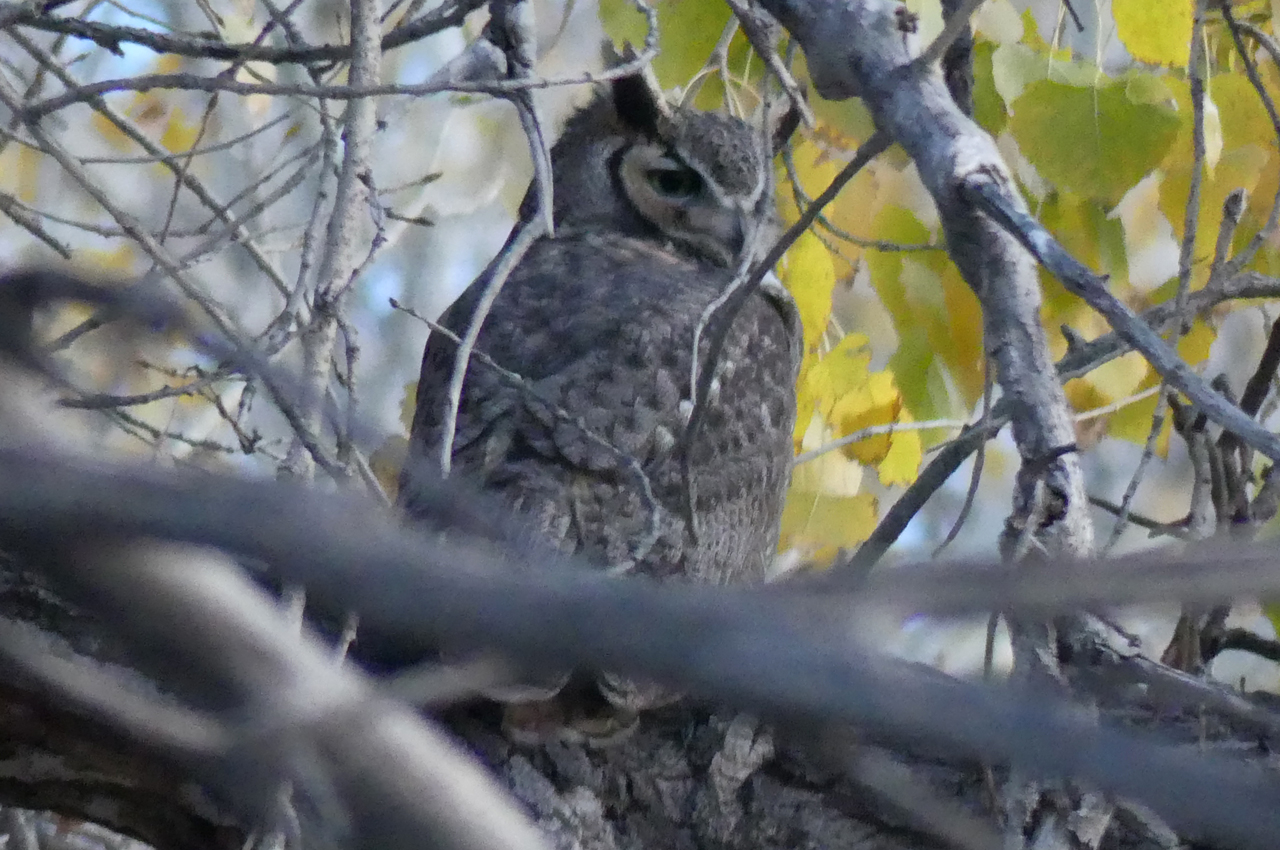 We were most interested in DeAnza Springs, the naturist resort, but the phones were down and we got spooked by a couple of very bad reviews. Instead, we booked two nights at Jacumba Hot Springs Resort and Spa. While the latter is a perfectly comfortable older motel with a very good restaurant, it would defy most visitors' expectations of a "spa". Both pools were too cold for swimming, and the single hot tub was over capacity until after 4:00 pm, when the day users departed. But the biggest disappointment was the town itself. Despite a spectacular setting and remarkable history, the main street is a collection of crumbling, boarded-up storefronts covered in trash and graffiti. We took a sunset walk past the ruins of swanky resort and Lake Lazar, now just a puddle in an overrun OHV area. The highlight was sighting two great horned owls who entertained us with an extended conversation. 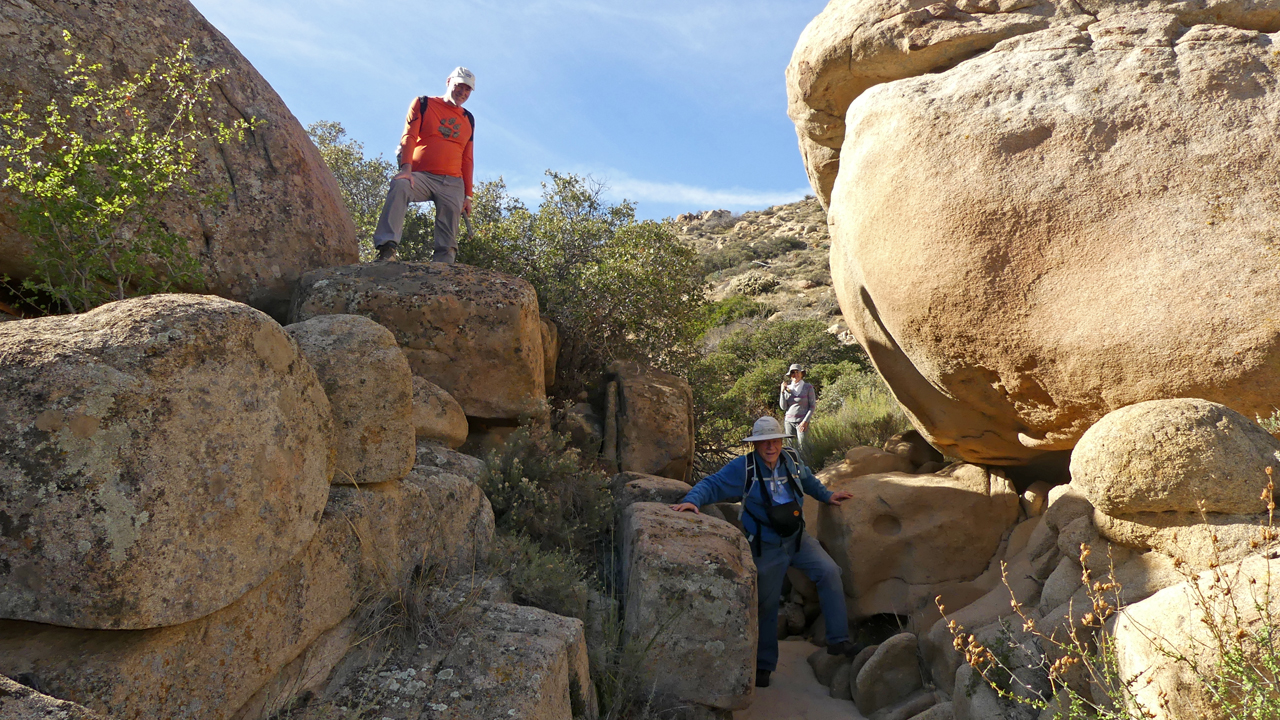 Valley of the Moon is a popular hiking destination, but the access road is unsuitable for passenger vehicles. We ended up hiking on a road ravaged by off-road vehicles. 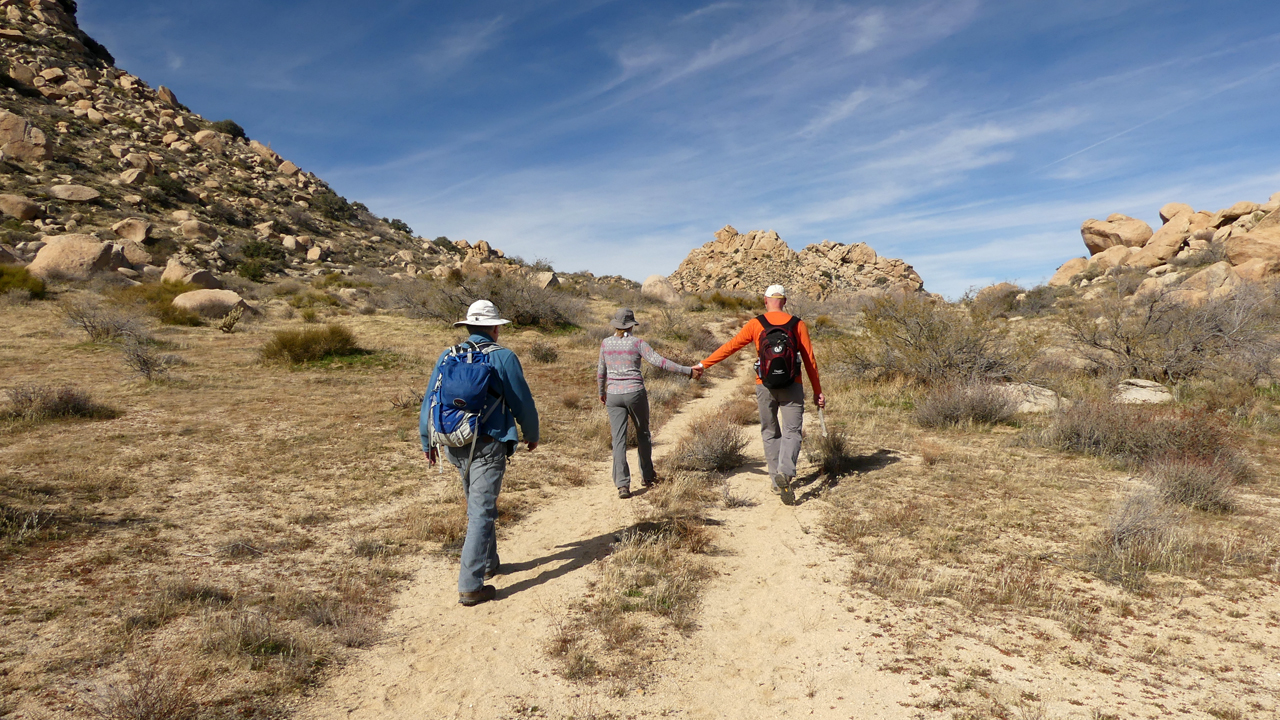 We explored a side canyon in search of an old cabin, but dozens of water caches indicates that the area is heavily used my migrants. 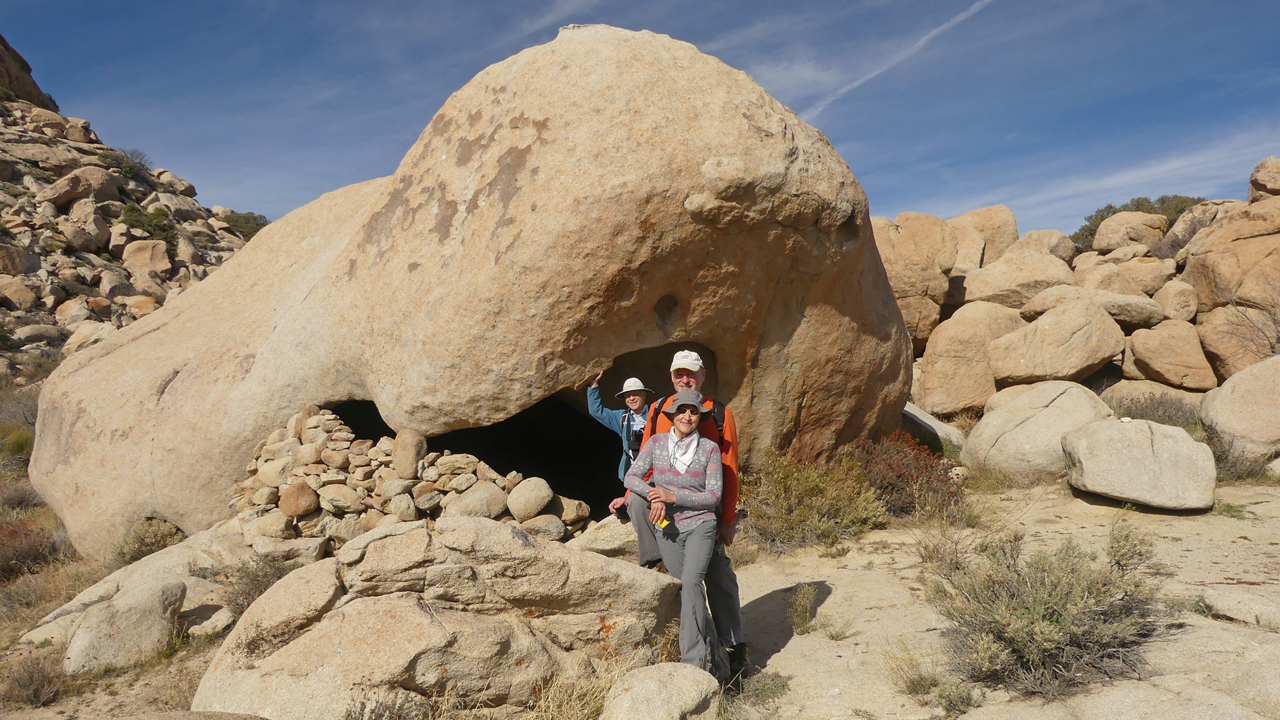 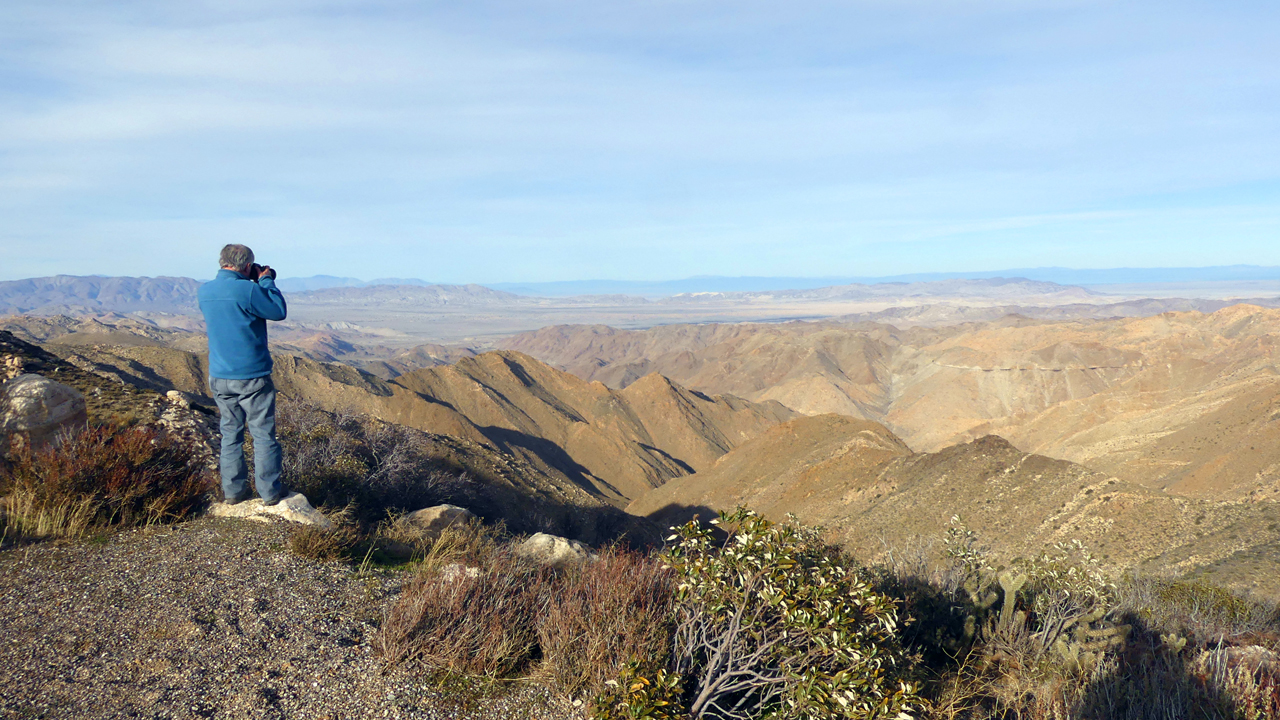 We took a side trip to Sacatone Overlook in McCain Valley, and were stunned to find this view of Carrizo Gorge at the end of the road. The Salton Sea is visible at upper right.

The view from Sacatone Overlook. 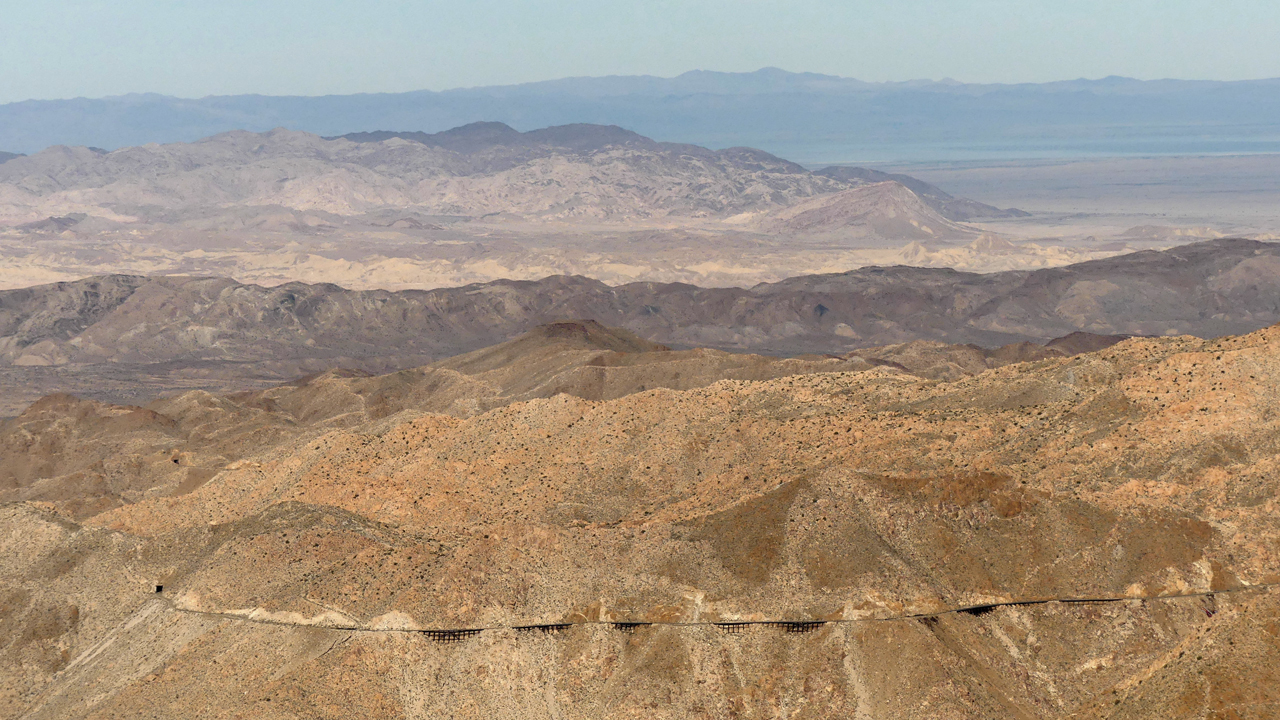 The San Diego and Arizona Railroad was the first rail connection between San Diego and points east. In Carrizo Gorge it traverses 14 trestles and passes through 21 tunnels in 11 miles, with 3700 feet of elevation gain/loss between El Centro and San Diego. Completed in 1919, it was repeatedly damaged by floods and avalanches and fires. The last passenger service was in 1951 and the line closed in 1984. 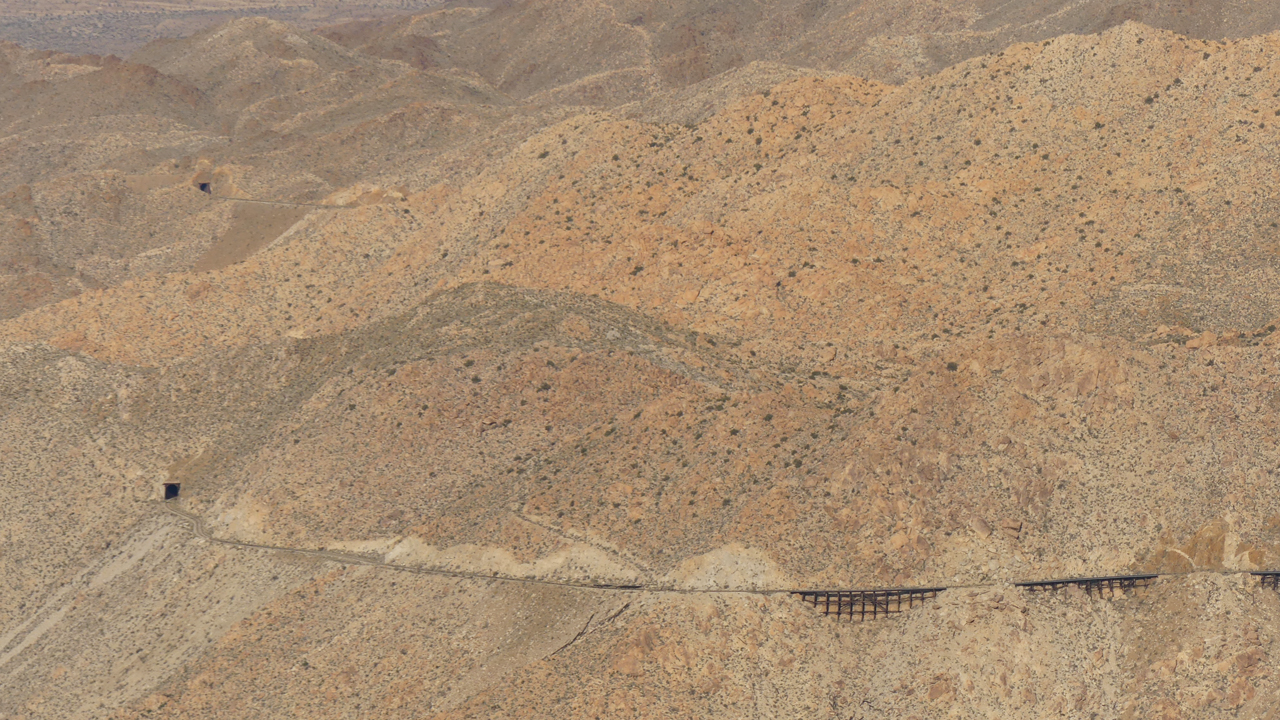 Visible here are two tunnels in Carrizo Gorge. We hope to return to the area in the spring for a longer stay and further explorations of the southern fringes of Anza Borrego.