In a few days, Kathy is moving back to Seattle. For her last hike as an Arizonan, her desert rat friends chose a run to Wet Beaver Creek on the hottest day of the year. 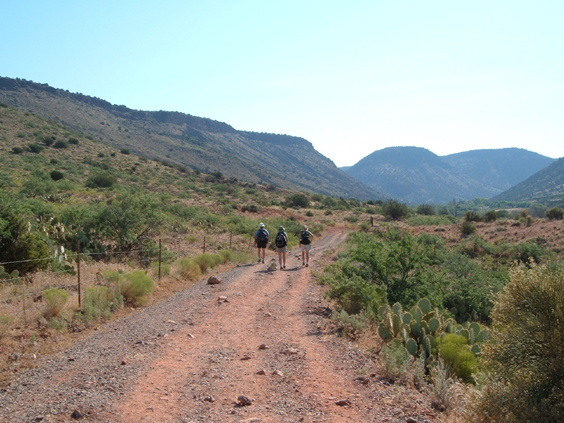 Dennis and Kathy and I drove up Friday night and met David at the Starbutt's in Anthem at 6:30 Saturday morning. 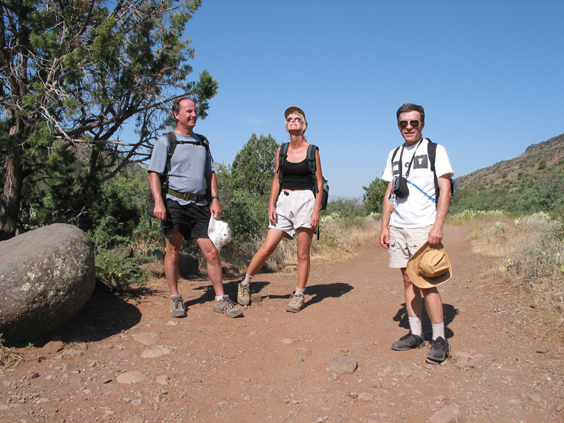 We hit the trail about 8:30 am, but it was already so hot that we left a trail of sweat on the parched red earth. 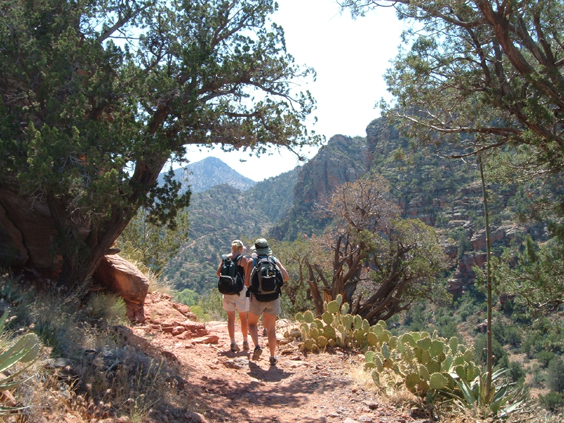 About two miles out, just as the sun reached full strength, the trail began climbing out the valley and tracking along a ledge on the west side of the canyon. 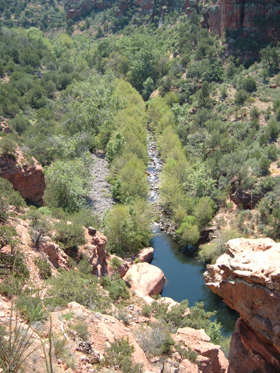 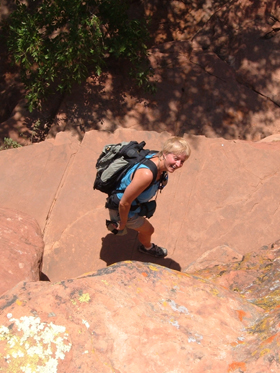 But several hundred feet below we were tantalized by glimpses of bottle-green pools. We reached the Crack about 10:00 and scampered down rocks that were almost too hot to touch. 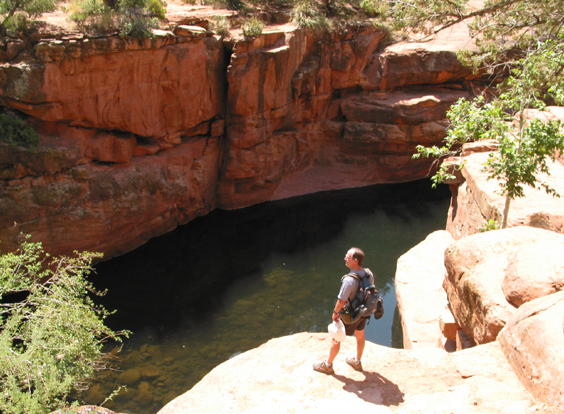 Our reward was all the dipping we could stand in the most beautiful pool in the state of Arizona, on a day when only lunatics would go for an eight-mile hike. 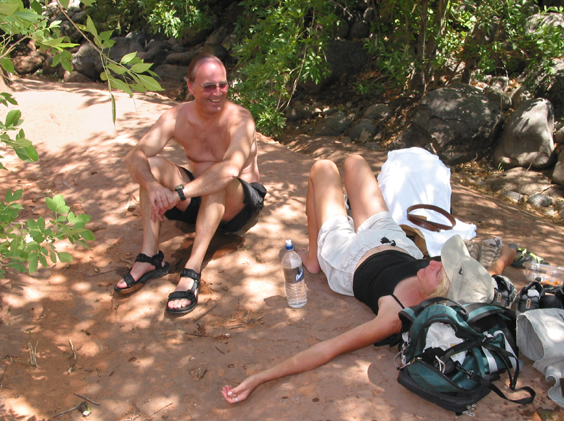 We ate lunch in the shade, courtesy of the cottonwoods, Arizona sycamores, Arizona ash, and desert willow that Kathy identified for us. 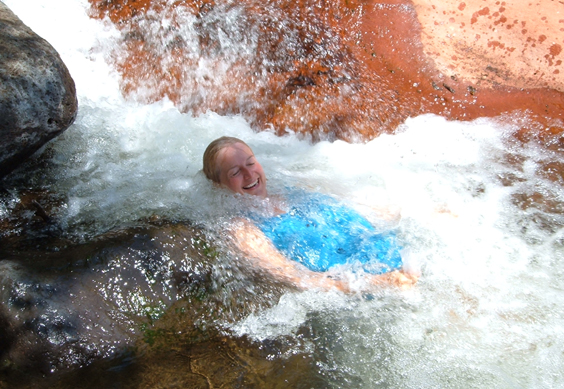 On the return hike, temperatures topped 105 degrees and sent us scampering back down the cliff to make our way along the creek. 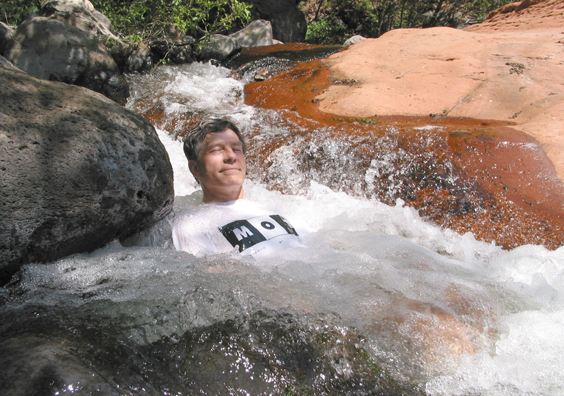 We stopped frequently to splash in the cool water, including this remarkable outdoor jacuzzi. 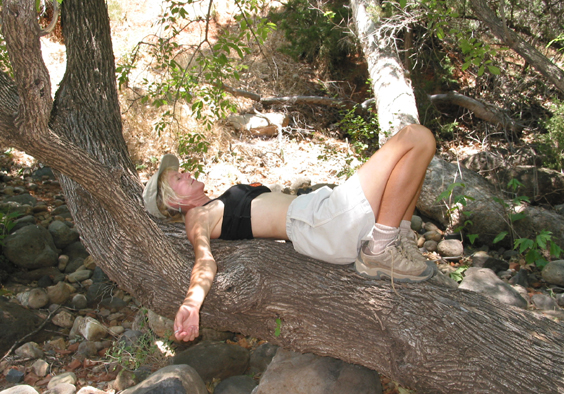 Kathy found a natural hammock for a nap in the shade. Did she soak up enough heat and sun to get her through her first winter back in Seattle? 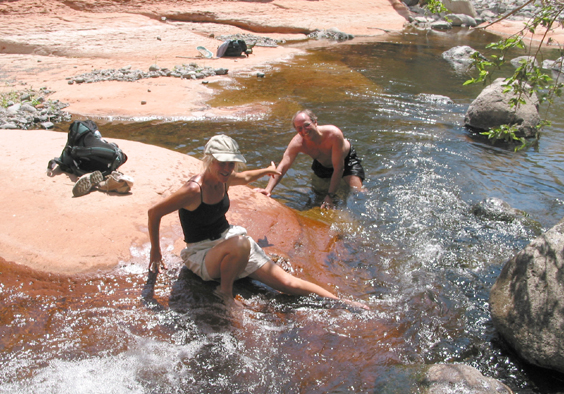 Despite David's "encouragement," Kathy finally got her feet wet in an Arizona stream. 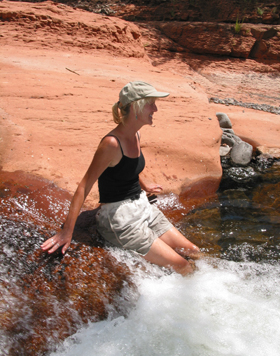 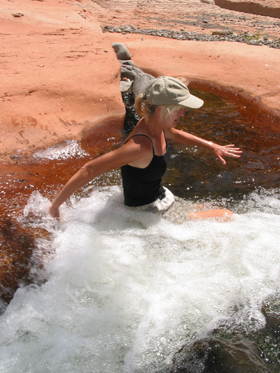 Finally, after three years in Arizona ... 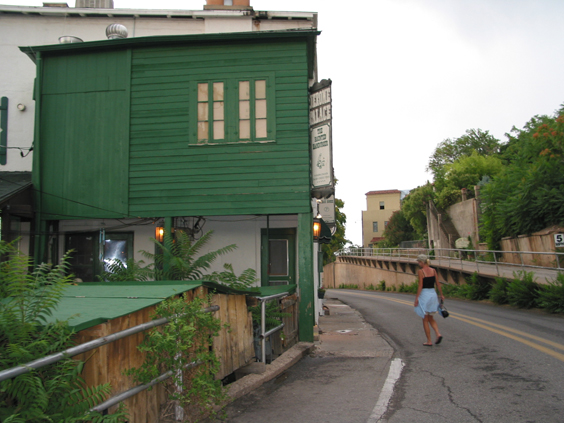 To top off a perfect day, we all met for dinner at the Haunted Hamburger in Jerome. Gusty winds and a leaden sky promised a good rainstorm, but delivered only a few sprinkles and loads of dry lightning 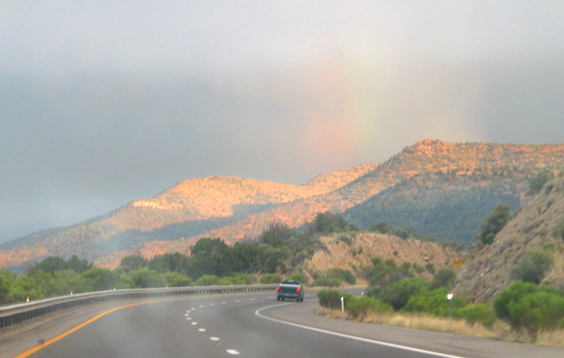 As we drove home, lightning ignited brushfires before our eyes, and the sky was a bizarre mixture of smoke, storm clouds and rainbows. 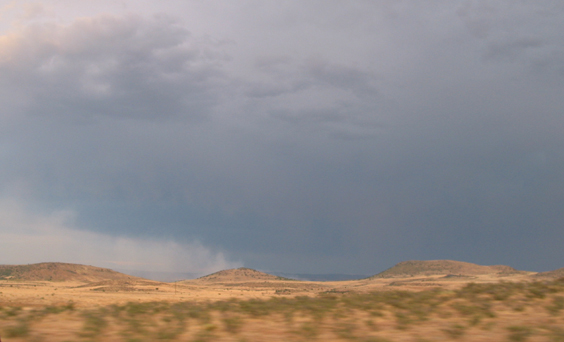 The setting sun catches a new brushfire on the mesa near Bloody Basin. If it doesn't rain soon, Arizona will explode. P.S. When we passed through Phoenix at 9:00 that night, it was still 109 degrees ...