With most topo maps last updated in the 1960s, navigating the backroads of Arizona has become a very inexact science. The idea for this trip began with a news release regarding road closures in the Coconino National Forest. The release made reference to the "rehabilitation" of routes 9139P, 9242 and 9244 in the Wingfield Mesa, Cottonwood Basin and Verde Falls areas south of Camp Verde. Naturally these route numbers do not appear on any maps of the area, nor did the Forest Service communiqué provide a map or directions. After many hours of research, we concluded that they must be the three roads that take off from FR500, which is a hard right off Route 708, otherwise known as the Fossil Creek Road between Camp Verde and Strawberry.

We drove up from Tucson on Saturday morning in the Taco Ma, now sporting no less than four antennae as well as a new radio and an APRS tracking system that continually broadcasts our position to an obscure web site. We hit Camp Verde about 2:00 pm and stopped at the Ranger Station to ask about the road closures, but of course it was closed. Who would be visiting the National Forest on a summer weekend? 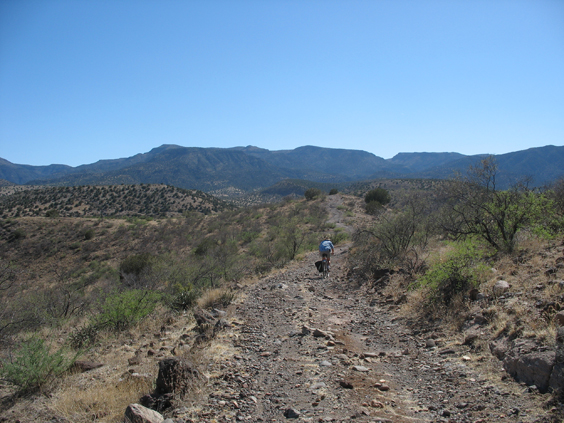 Undaunted, we located FR500, a rough jeep track, and followed it about two miles until the route was blocked by a very convincing steel barricade. Was the area closed altogether, or just closed to motorized vehicles? There was no way to tell. So we parked the Taco Ma and continued on our mountain bikes about another two miles, until the road was so chewed up we had to stash the bikes and continue on foot. 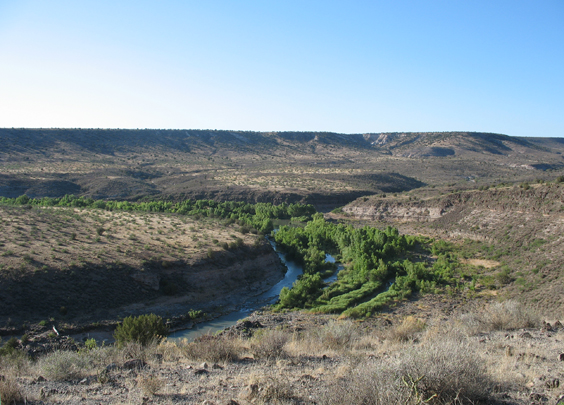 Did I mention that it was 99°? A nice temperature for a rough ride across a high mesa with no shade. But then the green, green Verde River Valley opped into view, and we forgot all about the heat. A faint trail took us over the nose and down to Verde River Falls. 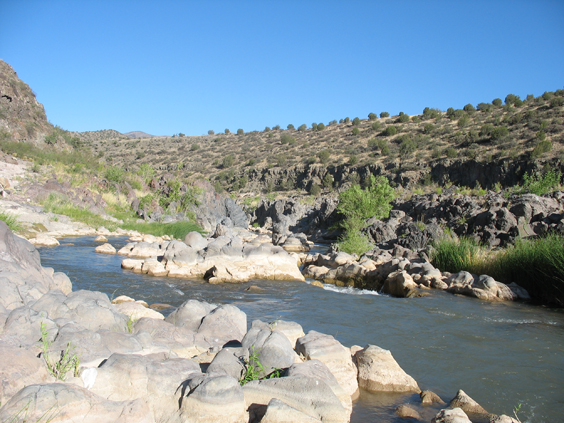 The water was quite cloudy and the rocks were caked with mud and dried weeds, but the cool water was delicious all the same, and we shared the pools with dozens of very large dark fish. 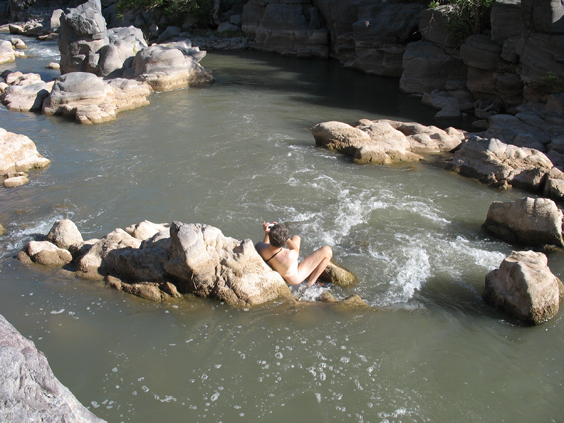 We stayed until the sun was low on the horizon and pedaled back the way we came, setting up camp on the mesa just above Cottonwood Wash. Numerous ATV tracks indicate that the wash is now the preferred route to the Verde River. 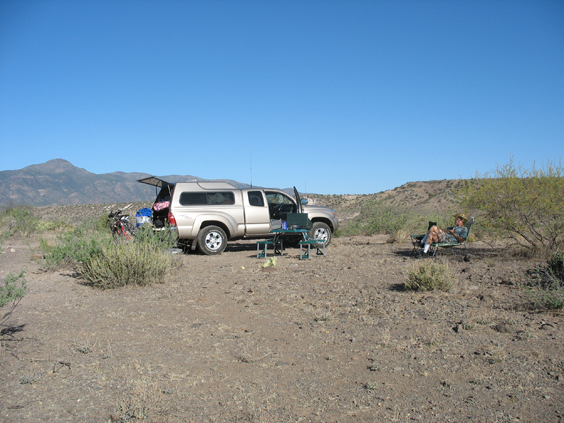 Despite a weekend-long VHF contest, we only talked to 2-3 other HAMS. A rosy sunset and an enormous full moon made even this desert beautiful. Except for one lonesome coyote, the night was absolutely silent. The sun beating down on the roof of the Taco Ma got us up in a hurry and off to explore the west side of the Verde River via Salt Mine Road. 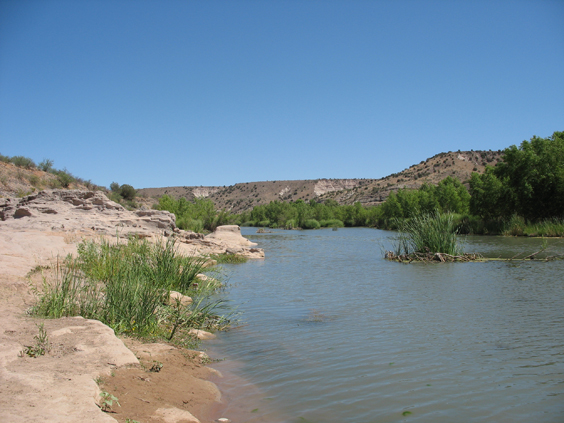 Although there are no signs, we easily located the side road to Beasley Flats. However, we found the shore littered with garbage and the river clogged with reeds and green slime. Yuck! 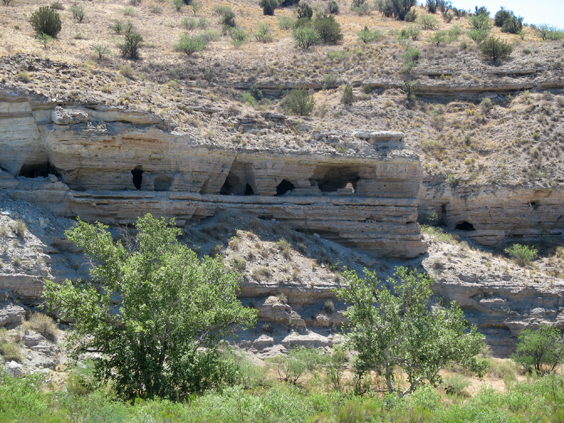 The only redeeming feature was a Swiss cheese cliff on the opposite shore. 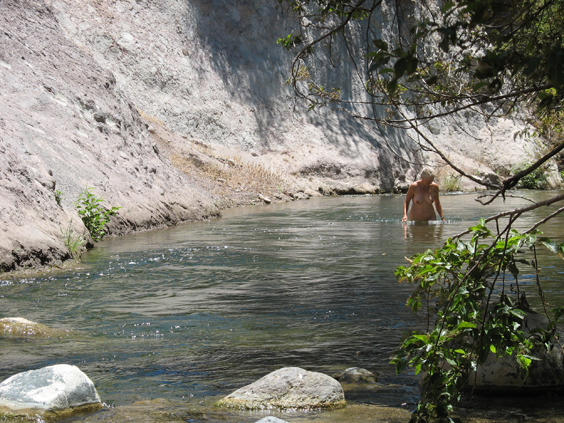 We decided to continue exploring Route 708, an excellent gravel road that winds its way through the Towel Mountains and then drops back into the Verde River Valley just above the Childs Power Plant. From here you can take any side road to wonderful swimming holes along Fossil Creek, and that's where we spent the hottest part of the day.

The Verde is the heart of Arizona, but Fossil Creek is its beauty spot. You can't beat the clear teal blue water of this fast-flowing desert gem. 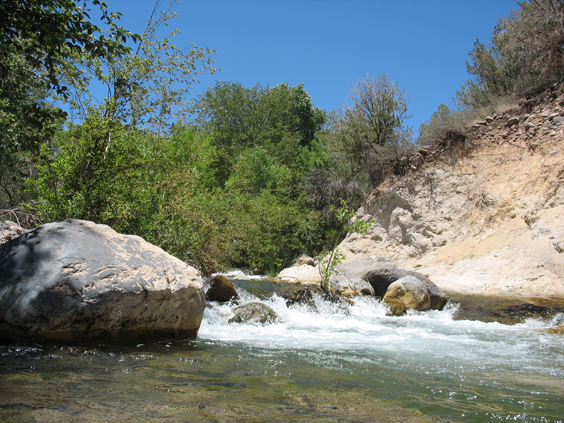 Next stop up and over Ike's Backbone to the Verde River, hoping for lighter crowds at the hot springs on a Sunday afternoon. It was 102° when we hit the trail, but we must be getting used to the heat. And the reward was spending the end of the day alternating between the warm tub and the cool gray-green river. 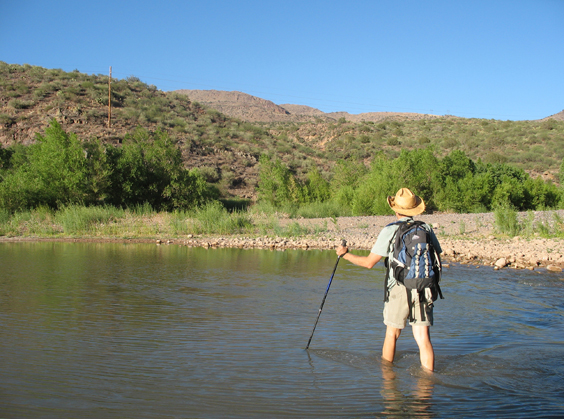 Just for fun, we tested Taco Ma's mettle on a gnarly 4WD road that runs about one mile out to the tip of Ike's Backbone, a 4300-foot ridge that divides the Fossil Creek and Verde River Valleys. 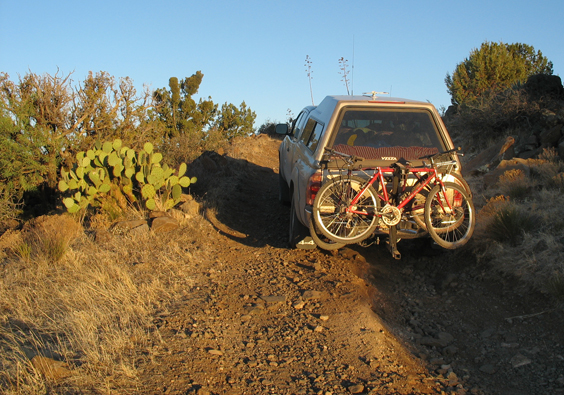 Needless to say, we had the place very much to ourselves. Ditto for the airwaves, despite a clear horizon. "Radio WILD: Broadcasting from Nowhere to a World That Doesn't Care." 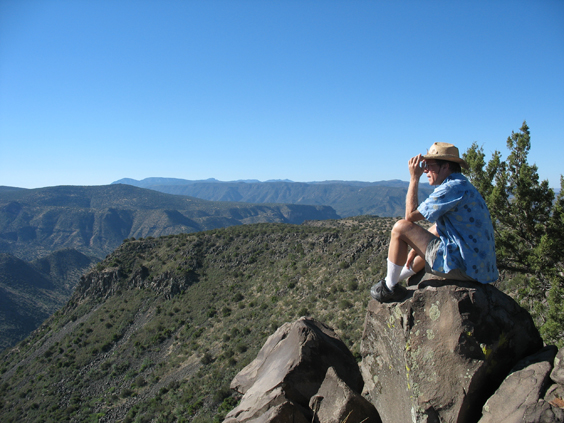 There are fine views from the promontory of Deadman Mesa, Hardscrabble Mesa, Black Ridge and Squaw Butte. 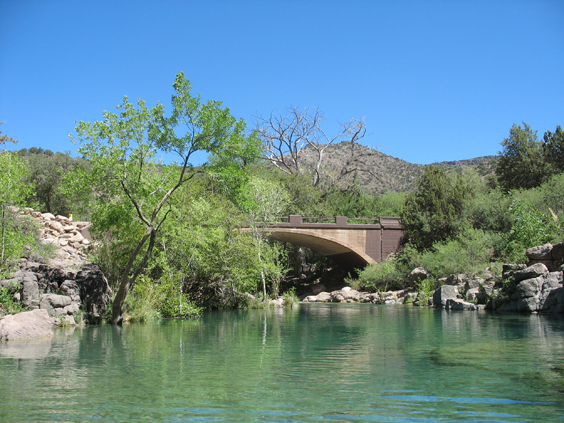 Sunday, June 12, was Dennis' 58th birthday, and the best present was having the swimming hole under the Fossil Creek Bridge all to ourselves. 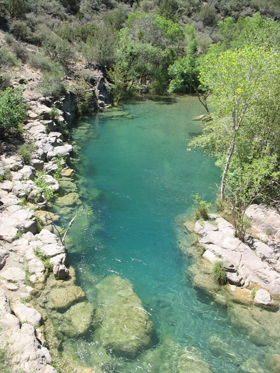 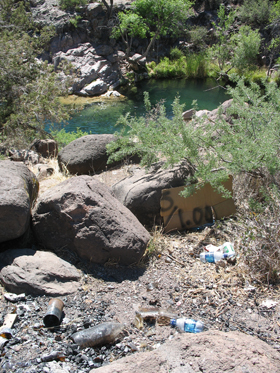 Fossil Creek is Arizona's most beautiful stream. Unfortunately, our fellow citizens are hell-bent on destroying it. Beer cans, broken glass, plastic tampons, full bags of trash -- for heaven's sake, they drove their damn cars right to the river's edge, couldn't they walk a few more steps and put that crap back in their trunks?

Lessons learned from this trip: