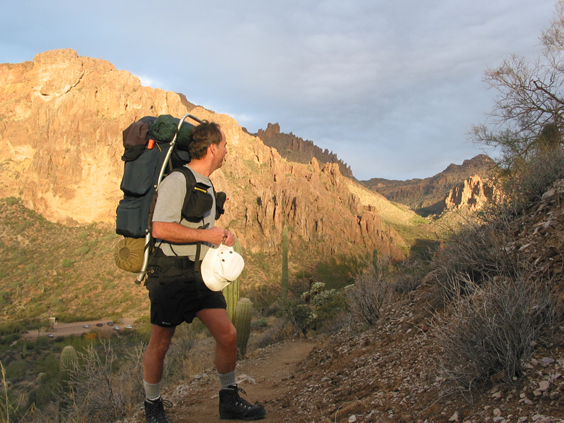 Early Christmas Day we set out from the Peralta trailhead for a three-day trek in the Superstition Mountains.

We followed Dutchman's Trail over a small rise and emerged in a broad valley known as "Coffee Flat," heading toward Miner's Needle. It was my first overnight hike in more than 20 years, since I have notoriously creaky knees. We planned carefully, reducing our baggage to the bare minimum. Still, I was carrying over 30 pounds and David was toting at least 60, including six liters of water. 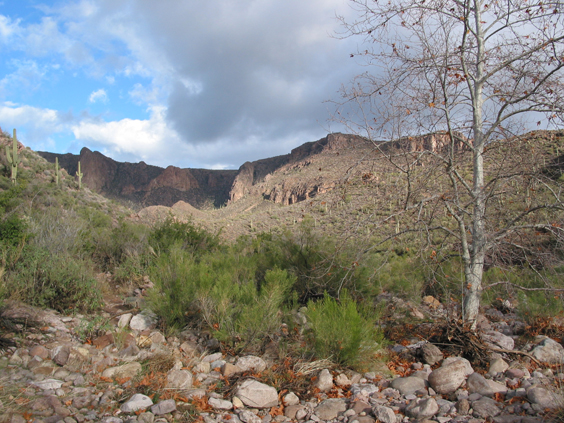 Behind the needle, we turned and followed a faint trail over a stony ridge. We stopped frequently to snack, drink water and rest. 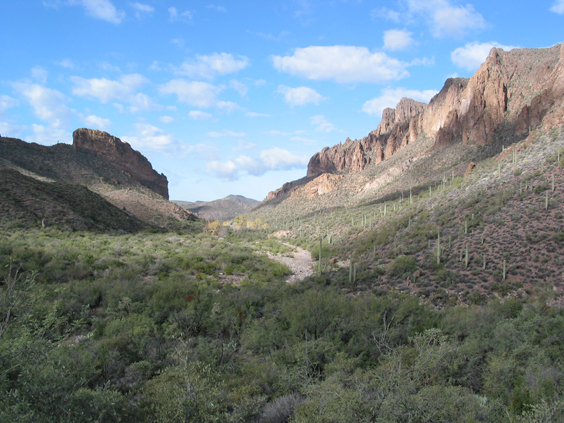 At the top of the ridge we picked up Whisky Spring Trail and followed it down a draw, stopping to rest in a lovely little oasis where an old cement trough served cowboys and prospectors in days gone by and the trees were atwitter with birds. Here we met the only other hiker we would see that day. 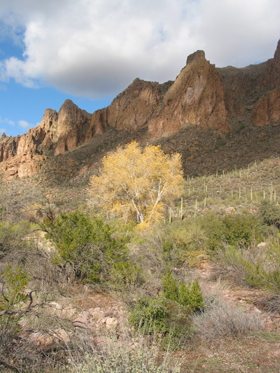 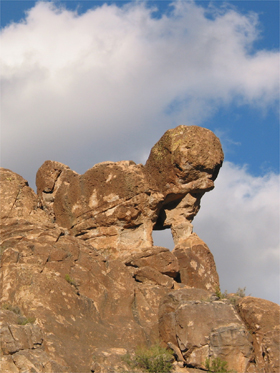 With about nine miles behind us, we made camp at a sandy spot just above La Barge Canyon. It was such a relief to be free of the packs and the heavy boots that we just sat still watching the golden cottonwoods dancing in the lowering light. 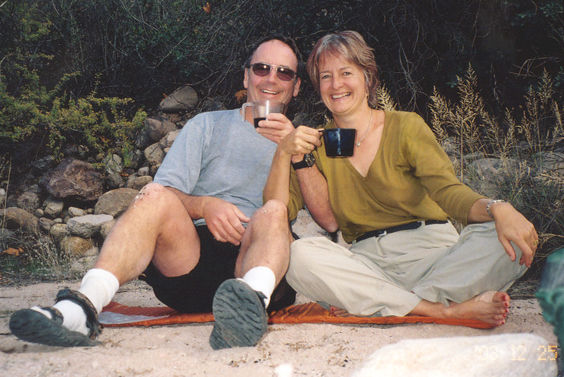 "You know," I said to David, "the only thing I'm really missing is a glass of wine." 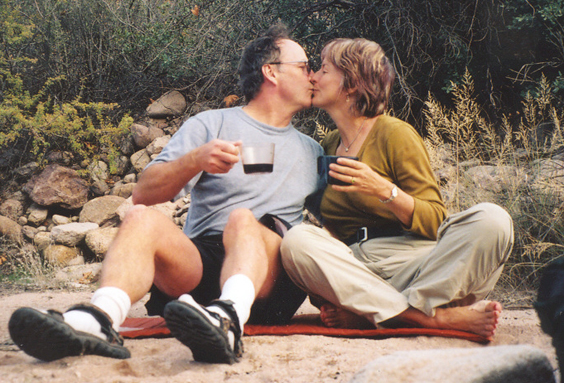 Grinning broadly, David reached into his pack and pulled out a tiny bottle of Vendange Merlot. Best damned wine I ever tasted!

At the next junction we turned south and eventually picked up Terrapin Trail. As advertised, the trail climbed steeply through dense brush, rising quickly to over 3000 feet where we had stupendous views of the jagged peaks of the Superstitions to the north. And to the south, Weaver's Needle towering at +4500 feet. This was the most spectacular section of the hike, running along the top of a ridge of honey-colored hoodoos and twisted spires powdered with peridot green lichens. Just where the trail began its descent, with distant views of the edge of the world, we found a great campsite with a built-in stone table. I fell asleep instantly, not even bothering to cover my pack. We knew there was rain in the forecast, but the sky was clear at sunset. Around 5:00 a.m. I awoke to a portentious pitter patter. Within minutes, it was raining so hard we couldn't talk over the roar of wind and water lashing the tent. In the morning I fully expected to see whitecaps in the washes, but the ground was merely damp. While we made coffee, the sky cleared, and we decided to continue at least to Charlebois Spring where were could take on more water. The water had a profound green taste -- like iced herbal tea -- but we were glad to have it! 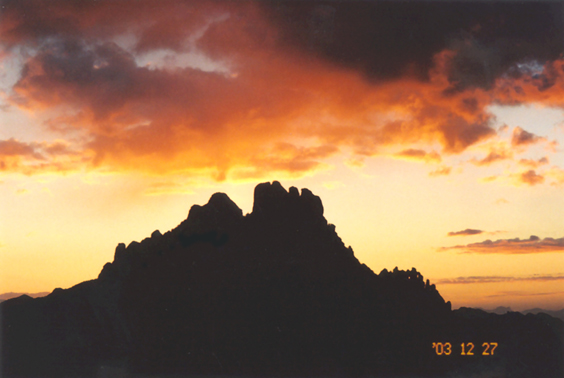 The temperature took a dive at sunset and we piled into the tent for a LONG night's sleep. We awoke to frozen water and ice crystals on the walls of the tent, but the sunrise made it all worthwhile. 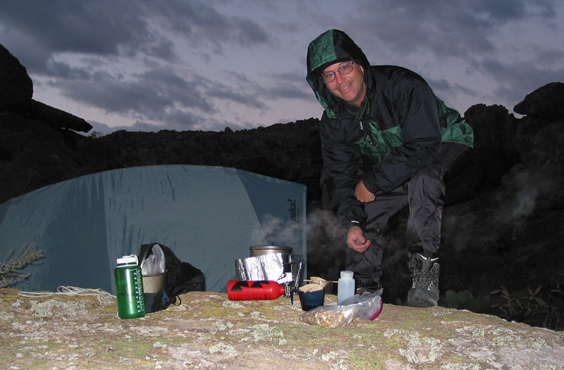 Wears a 60-pound backpack and a smile, stocks more equipment than most sporting goods stores, makes coffee in the morning, and leaps tall buildings in a single bound ... 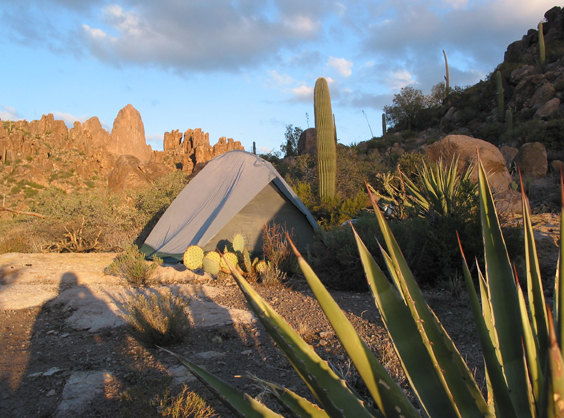 Dawn at the top of the world. Weaver's Needle on the horizon, me and the G2 in the foreground. 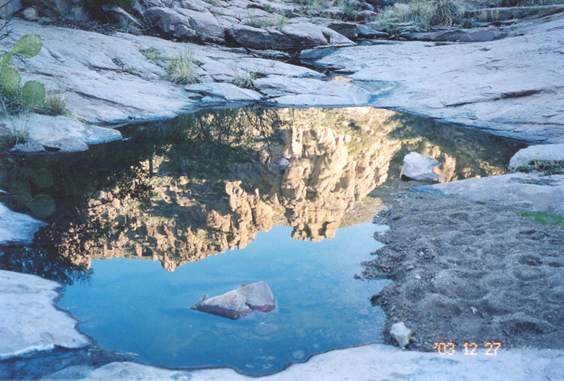 Reflections on a great hike.