South Around the Santa Ritas

My first attempt to bike around the southern end of the Santa Ritas dates back to 2001. I had just moved to Arizona and purchased my first mountain bike, and I was anxious to try out new my two-wheeled 4WD vehicle. Using "The Map" as a guide, I chose Bull Springs Road, and it only took a few hours to get hopelessly lost as well as seriously dehydrated.

Fast forward six years. I'd heard various reports on whether the "southwest passage" did or did not exist, and could or could not be navigated even on two wheels.

While exploring the hills west of our beloved Patagonia, we decided we should continue the journey on two wheels. Consulting the latest version of "The Map" (which was out of print for years), we thought we'd try biking from Patagonia Sonoita Creek Preserve to the ghost towns of Salero and Alto at the southern tip of the Santa Ritas.

Based on its designation as a mountain biking route, we were expecting a narrow 4WD road looping through high desert wilderness. So we were quite surprised that Salero Ranch Road was freshly bladed and wide enough to land an A380. Why would anybody build such a substantial road in the middle of nowhere? 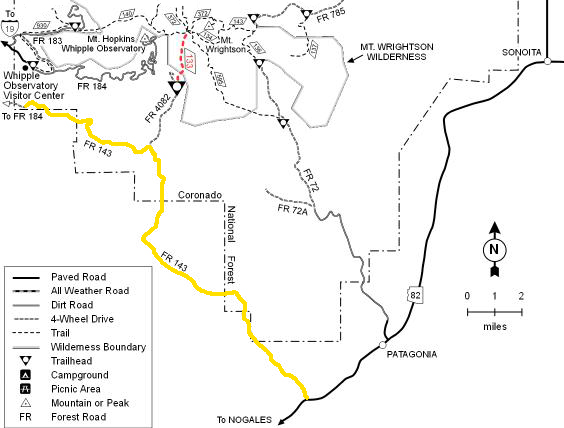 The answer was obvious when we came to our first solar-powered gate. Salero Ranch is now a 20,000-acre subdivision touted as "the finest deedable, large-parcel land available statewide." And while you could fire a canon and not hit anybody, "a gated and locked entryway assures privacy for Salero Ranch owners and their guests". Every side road from Sonoita Creek to the National Forest boundary is barricaded, including the only access to the former mining town of Salero, which has some significant ruins that I dearly wanted to see. 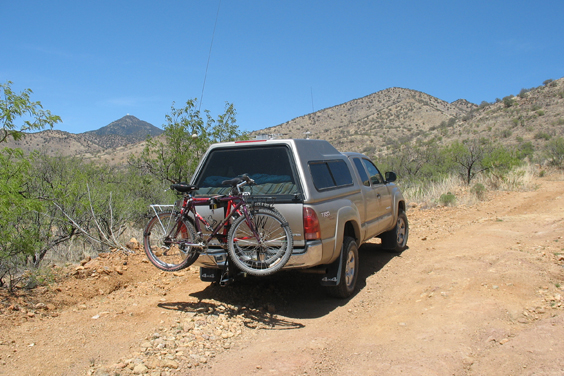 So ... we just kept driving! After 14 miles of "movingly rewarding" views of 40-acre ranchettes, we crossed into the Coronado National Forest. The road quickly deteriorated — what a relief! — and we finally unloaded the bikes. 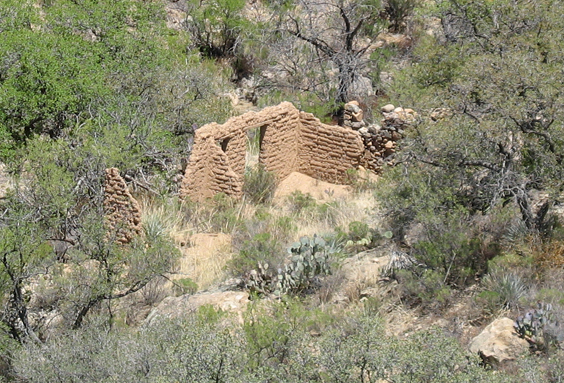 The photo at left shows the ruins of an adobe building in the former mining town of Alto. It occupies a canyon near the Goldtree Mine that opened in 1875 and was part of the Tyndall Mining District. 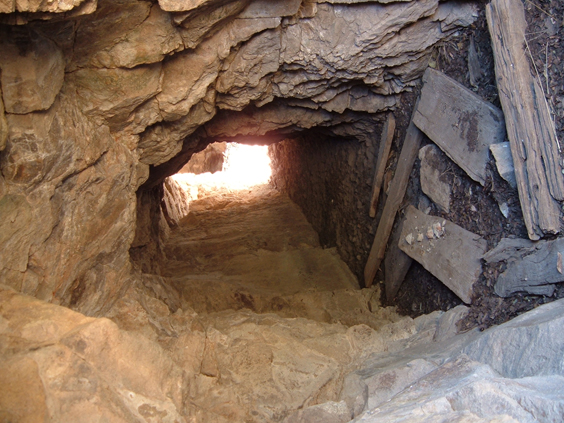 Mudhenge: Just up the road we came across the ruins of a large adobe building. I wonder if this is the former Alto post office (1907-1933)? I am only showing part of the building here because nearly every surface is covered with graffiti, especially "kil whitey", "brown power" and "fock". I don't know what offends me most: the vandalism, the politics or the atrocious spelling. And anyway it was most likely their focking ancestors who built the place! 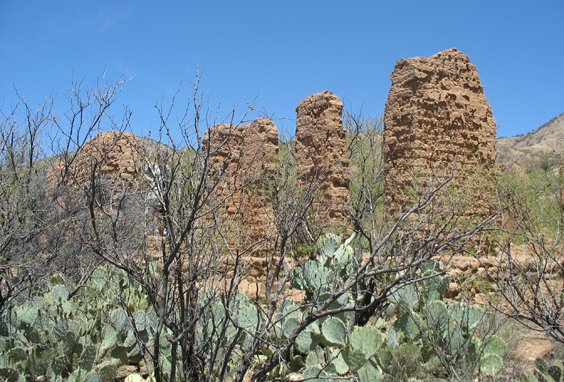 We found a delightful spot under a gnarled mesquite tree for a picnic. Nearby, we stumbled upon three very large foundations, each with a ramp and no sign of a roof or walls. What purpose did they serve? How I wish these hills could talk! 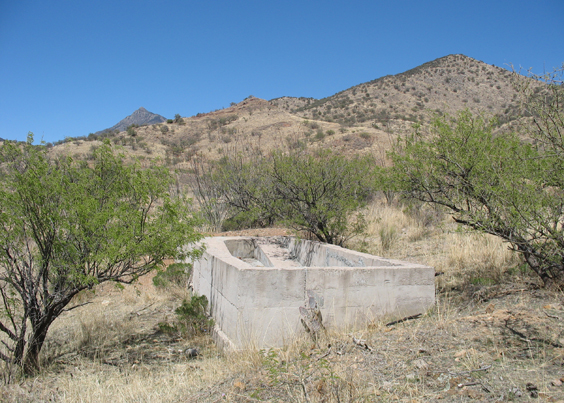 By now the road was just a dirt track, so we figured it was time to turn around and head back to Tucson. Just then we met a truck approaching from the opposite direction — the first vehicle we'd seen in hours. Incredibly, they said they had come all the way from Amado, and that the road was rough but passable. 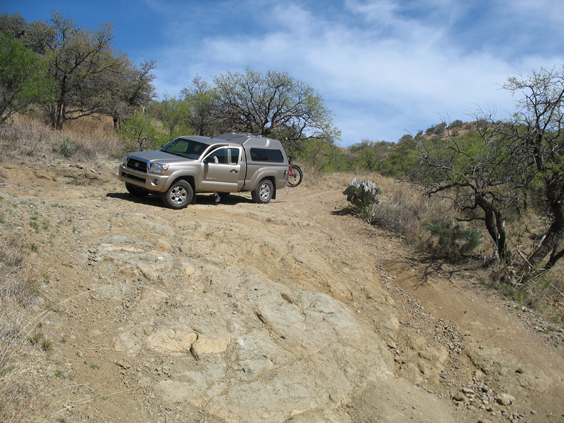 For the next five hours, we inched our way around the south end of the Santa Ritas along FR 143, mountain bikes in tow (yeah we took the bikes for a LONG ride). There aren't enough superlatives to describe the beauty of this high desert wilderness and the sense of traveling back in time to an Arizona that knew only isolated ranches and hardscrabble mines. 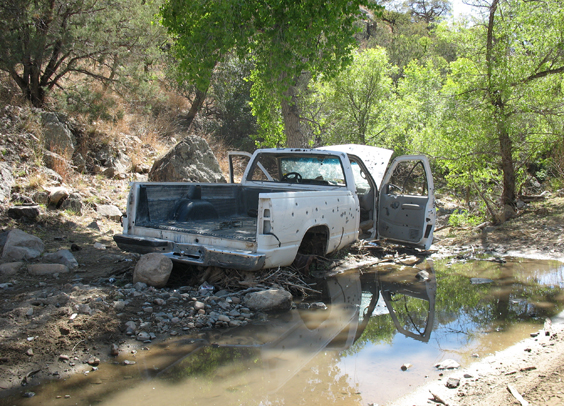 Second only to the scenery was the extraordinary number of junked cars. 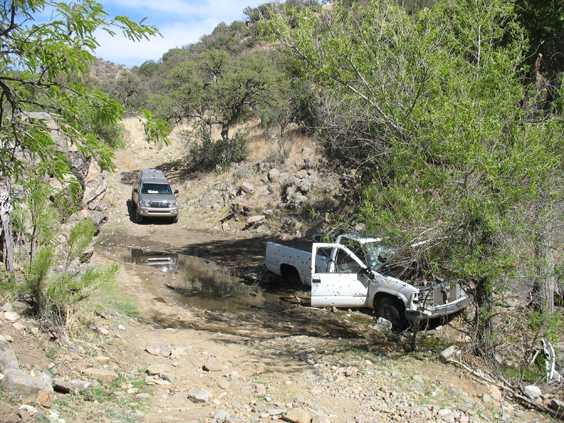 I don't mean two or three, I mean more than a dozen! 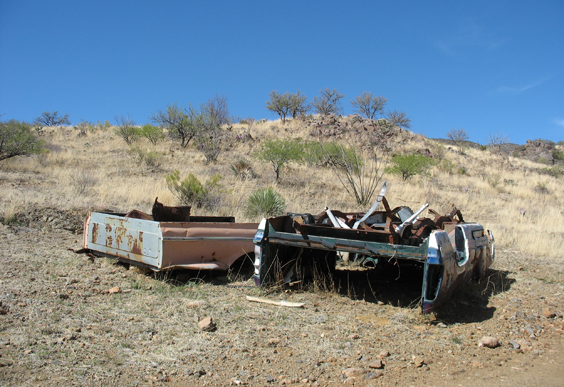 How did they get here? And how badly would you have to get stuck that you'd just ditch your car and walk away? 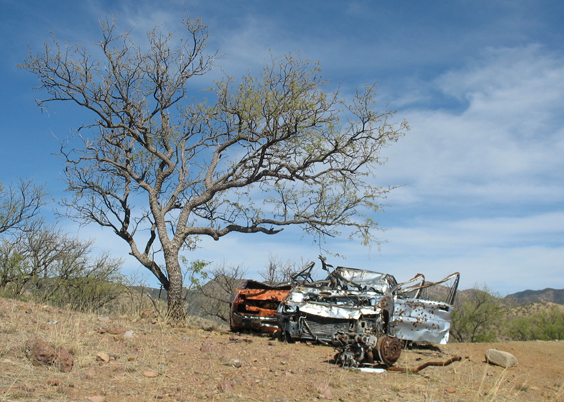 These junk car "sculptures" mark the top of a 5000-foot pass with a killer view of the Santa Cruz valley. 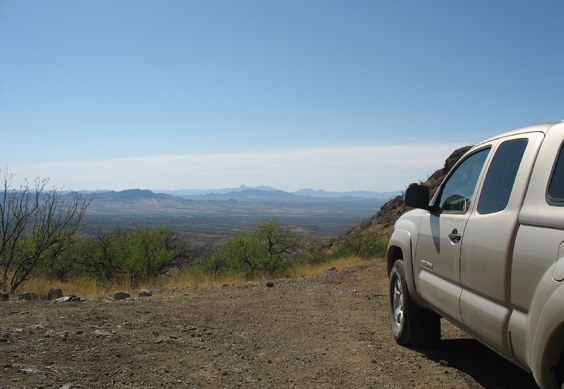 Just below this pass, the road wraps around a narrow stone shelf that is the subject of the video at the top of this page! 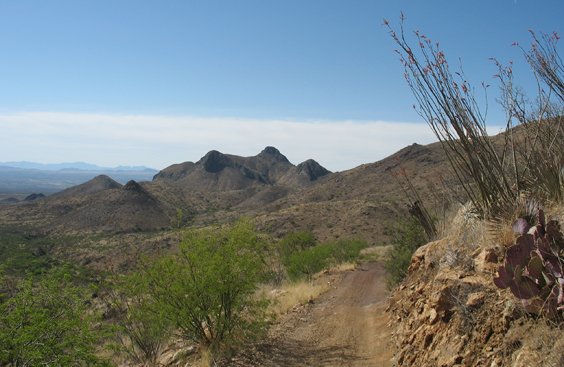 Back home in Tucson, I tried to learn a bit more about this road so little traveled. Most of the area was part of Baca Float 3, a land grant that dates back to 1821 and that was recognized by the Treaty of Guadalupe-Hidalgo that ceded the Southwest to the United States in 1848. The boundaries and location of the float were the subject of a prolonged legal battle and several elaborate swindles from 1860 well into the 1900s. See The Tumacacori Historic Resource Study for a detailed history. 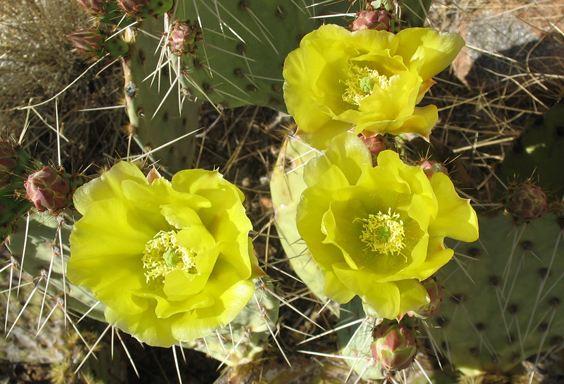 I guess there's nothing new under the Arizona sun. Remember Salero Ranch, whose "thoughtfully designed building and use covenants provide the kind of protection you'd want for this precious southwestern environment"? Seems their environmental zeal didn't stop them from selling off two large parcels to Asarco, complete with mining rights, in December, 1999. For a chilling account of the damage that can result from an unholy alliance of realtors, developers and mining companies, check out mymccrearyhomesucks.com 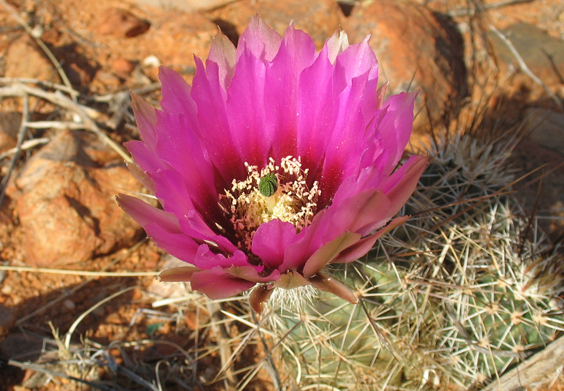