Just one week to go before the "Seasons of the Sonora art show" -- time for a road trip to some untouched corner of the Sonoran Desert where we could get away from the phone, the fax and the computer! 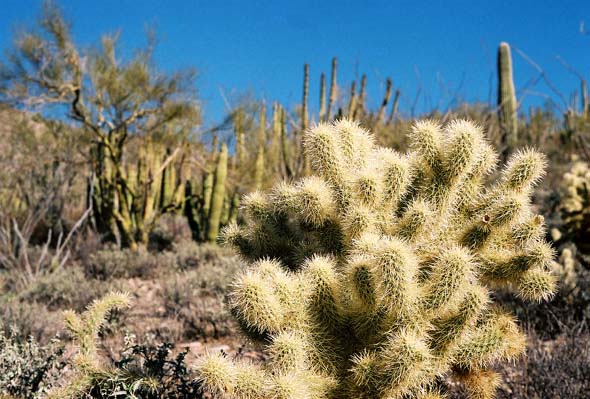 We left town on a Thursday afternoon and nabbed the last site in Alamo Canyon. Keith painted the desert while I curled up with a good book in the shade of Consuela. 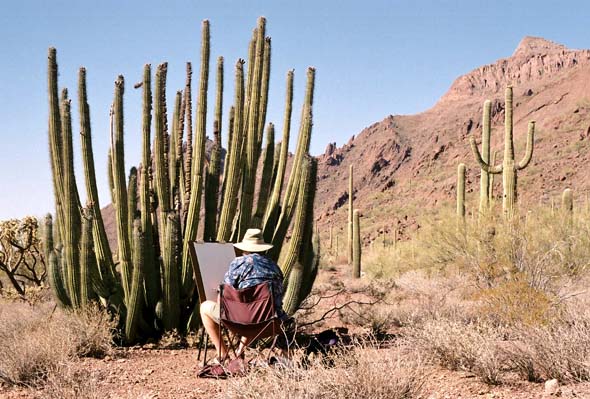 It was just after sunset when the first UFO appreared -- an enormous fast-flying jet that looked like three airplanes glued together. Then two orange beacons appeared on the horizon. First one, then the other would disappear and then pop up somewhere else. For the grand finale, more than a dozen jets did a huge donut that covered most of Southern Arizona, accompanied by more smaller planes than we could count. And we'd consumed nothing stronger than bean burritos with no non-traditional ingredients! 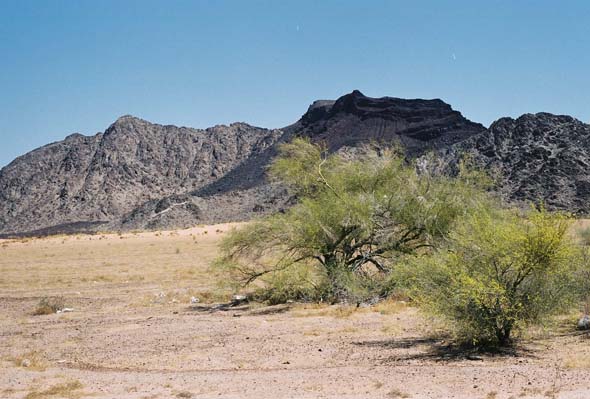 Worried that we were witnessing the outbreak of World War III, we fled across the border the next morning and headed west on Route 2. With Cabeza Prieta closed for "pronghorn antelope calving season" (aka open season on Mexican immigrants), Route 2 is as close as you can get to the infamous "Camino de Diablo" that claimed the lives of so many of the region's first European explorers. Even today, Route 2 is a narrow serpentine highway with treacherous drop-offs and no towns from Nogales to San Luis Rio Colorado. But it passes through the starkly beautiful El Pinacate volcano field, where the jagged peaks of the Sierra Blanca are marbled with tongues of black lava. We were stopped frequently good-natured Mexican soldiers, as well as by some apparent freelancers who wore no uniforms and were crushed by the discovery that our coolers held nothing but cheap local beer. 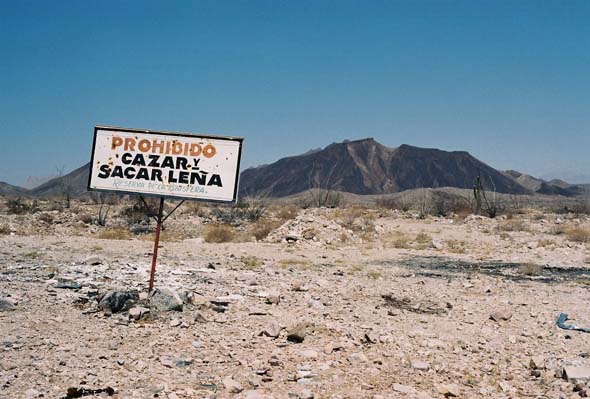 We were heading for a "fishing village" where the mightly Colorado River once emptied into the Sea of Cortez. As usual, my Guide to Northern Mexico was hopelessly out-of-date, and El Golfo de Santa Clara was nothing but a cheesy tourist town overrun by drunk Gringos on ATVs. By sunset, we were on the run again. Around 1:00 a.m. we pulled onto a side road in Kofa National Wildlife Refuge. But morning found us surrounded by desert scarred with tank tracks and posted with "Danger! Unexploded Ordnance" signs. You kinda have to wonder about all those complaints that most of southern Arizona is "public land." 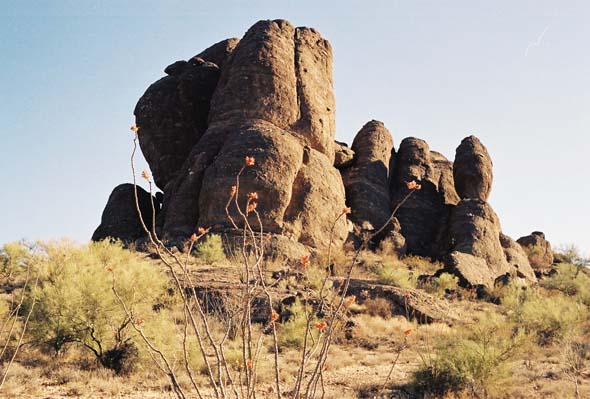 We finished where we started: in a remote corner of Organ Pipe National Park where at last we found peace, quiet and our own private hoodoo with a view of the Sonoran Desert as vast as an ocean.

So we put on our bathing suits, splashed water on each other and pretended we were at the beach.