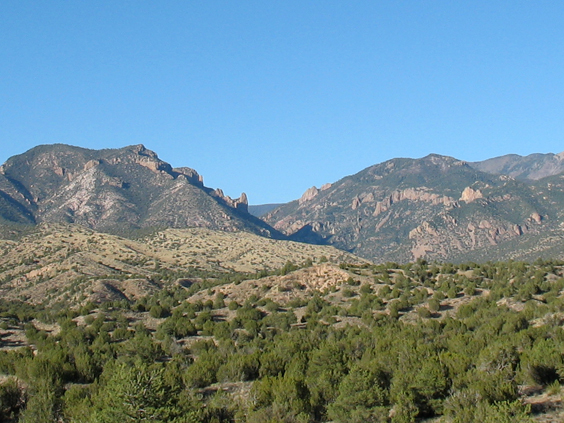 Those same sources generally classify this as a "rigorous" hike, requiring plenty of bushwhacking, boulder hopping and dragging your pack through a tunnel under a rock fall. It was clearly a hike to be attempted in the right season, and with the right companions! After several attempts — including one that ended in a weekend of cross-country skiing in Flagstaff — we finally managed to sync our calendars with David and Rogil for an expedition into New Mexico's glorious Mogollon Mountains. 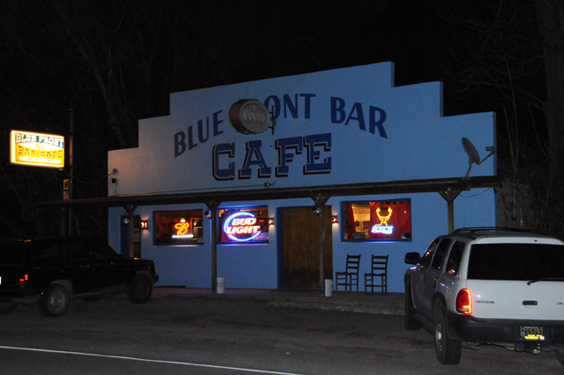 After a four-hour drive from Tucson, we met David and Rogil at a B & B in Glenwood, NM. Dinner at the Blue Front was followed by a high-level consult with our designated tour guides (all three of them)! 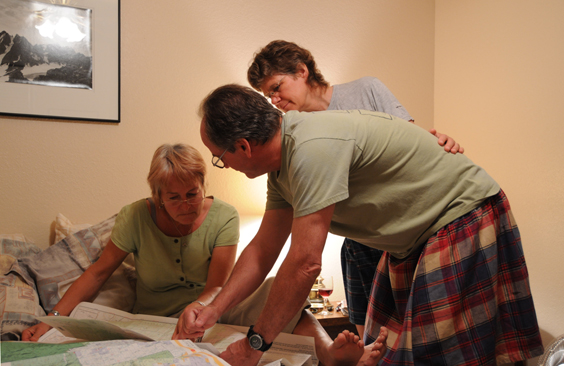 Next morning we were hiking in perfect 70-degree weather along the Gila River, whose path across the desert was outlined by lime green spring foliage. 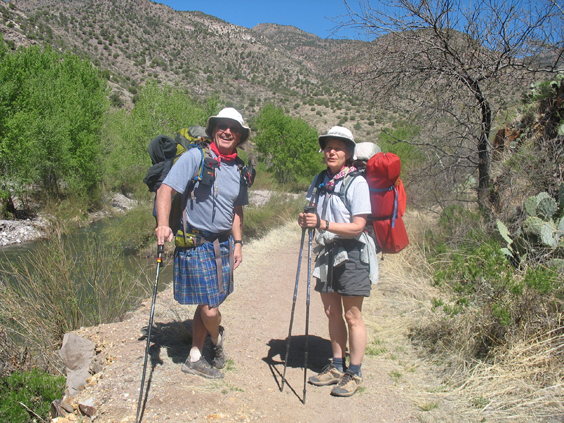 A rough trail crosses the Gila several times. The water was knee-deep, fast-moving and ice cold! 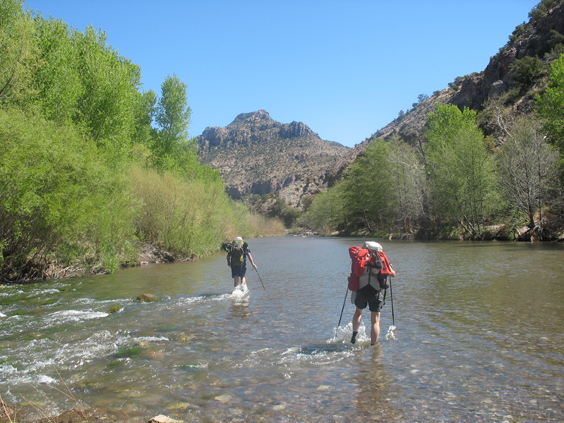 At the confluence, the trail leaves the Gila and heads up a side canyon along Turkey Creek. 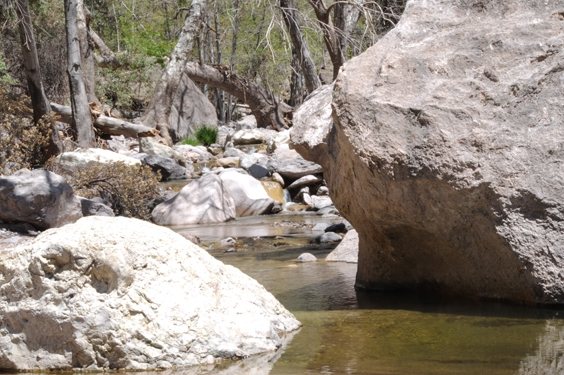 Stark white sycamores frame the creek against a backdrop of burnt orange cliffs. 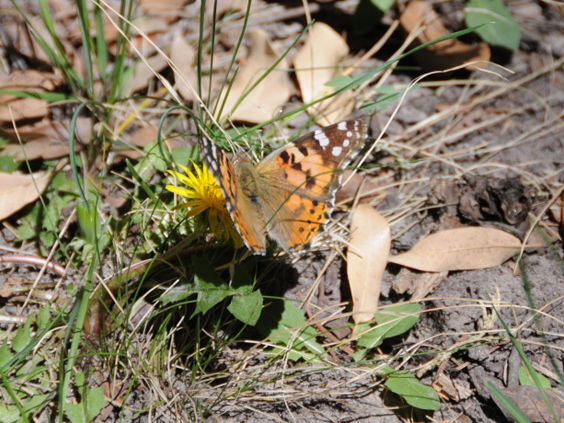 Although Turkey Creek is much smaller and quieter than the Gila, it still contains many inviting pools. 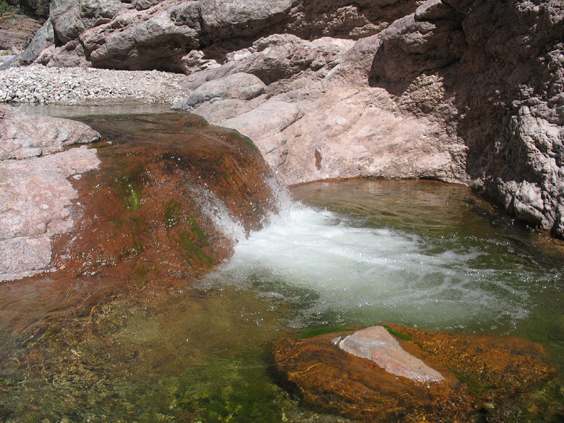 This one proved too much for David, and it was everybody in for the first swim of the weekend. 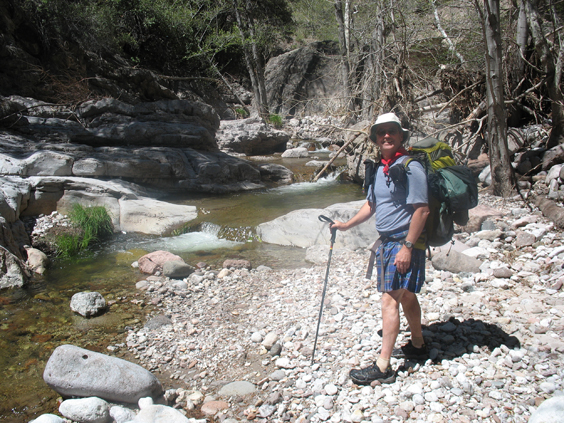 About three miles from the trailhead, the main trail switchbacks up the ridge between Turkey Creek and Skeleton Canyon. From here on, it's all bushwhacking along the streambed. 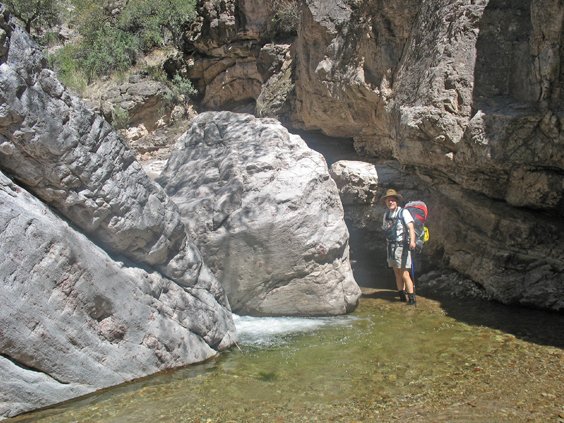 At the infamous rock fall, the clautrophobes among us (me!) opted to inch along the shelf to the right of the waterfall. 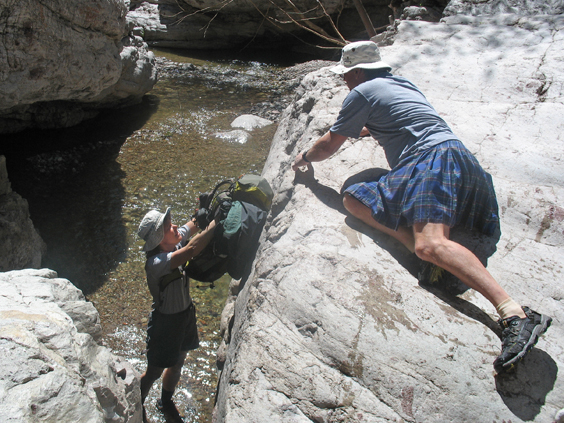 Rogil and David pitched in to help ferry our packs over the falls. 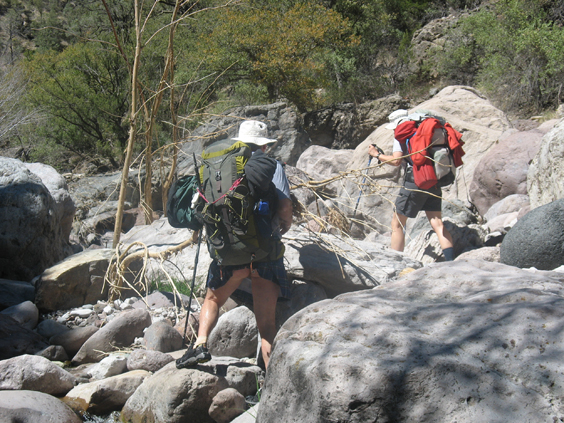 Now only a half-mile from the hot springs, David answers the eternal question about kilts. 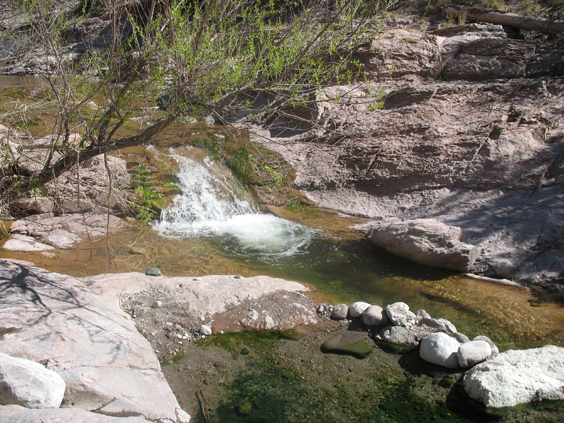 At last, we arrived at our legendary destination! 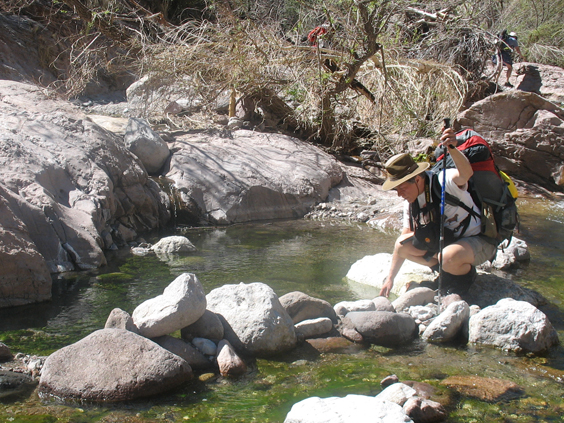 For a quarter-mile along Turkey Creek, water bubbles out of the ground at 165°F, and there are literally dozens of soaking pools.

It takes a bit of engineering to get the temperature just right. For better or for worse, we had three engineers on the project! 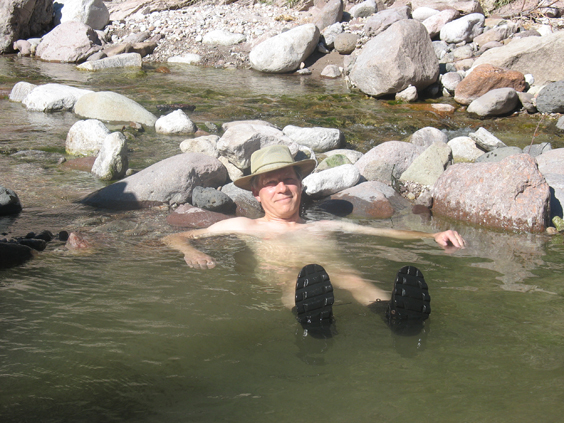 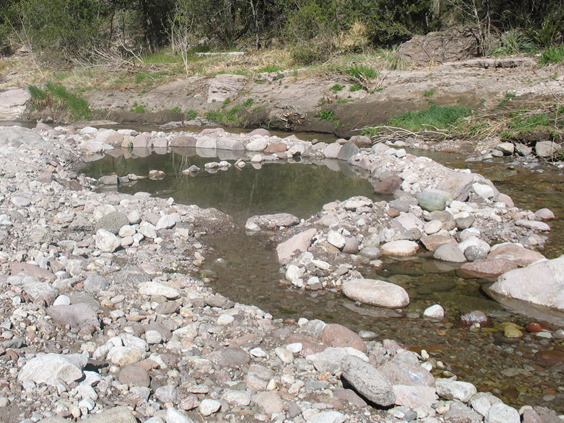 Despite numerous reports of heavy use of the springs, no other campers joined us that night. In the morning, we continued upstream, discovering numerous additional pools as well as a fine selection of campsites. 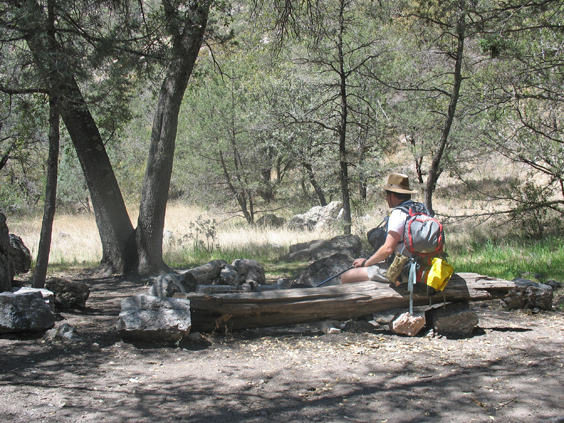 The canyon narrowed to a slot that was eventually blocked by huge boulders. I slipped off one of the boulders and landed on my back, but my fall was cushioned by a bag of crackers and granola bars. 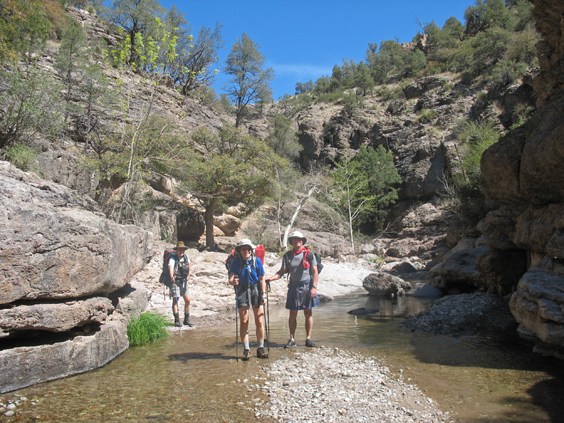 Rogil and David continued up the canyon, while Dennis and I returned to camp and a nice lunch of cheese and granola cracker powder. 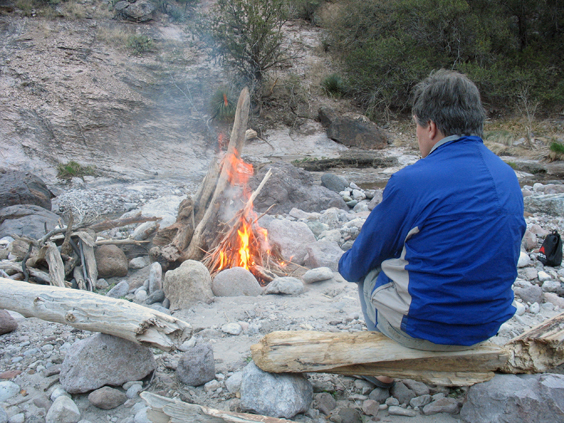 In addition to reengineering several pools, we gathered wood for the evening's bonfire. 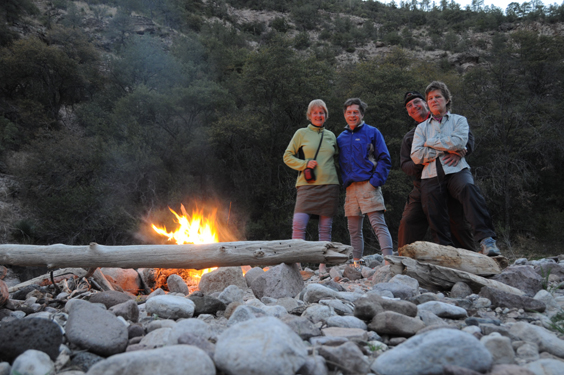 What a great way to extend a wonderful day in a watery canyon! 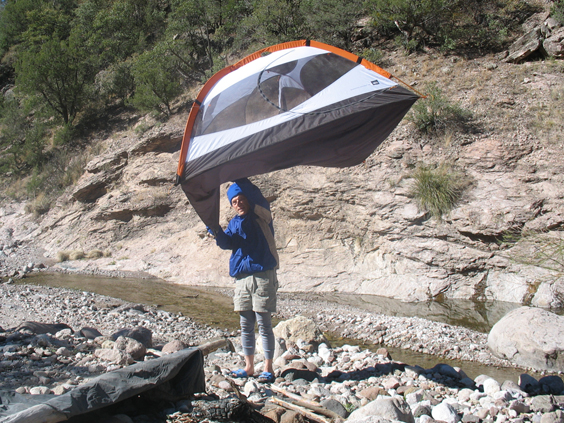 Next morning, alas, time to pack up and head home. Dennis twirls our super lightweight but very tiny backpacking tent. 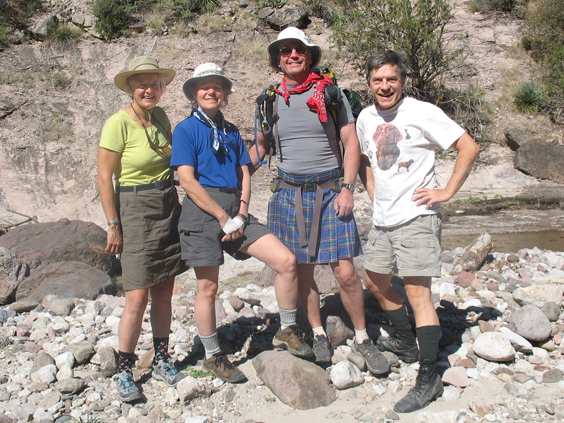 At least there were more pools to break up the hike home, including this fantastic natural water slide!