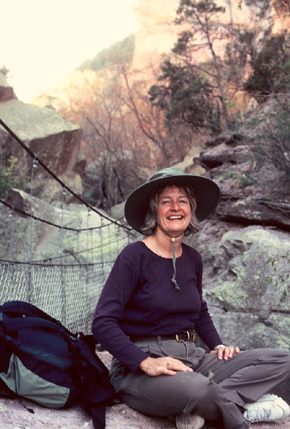 I celebrated Thanksgiving, 2002, by taking a road trip, alone, along the Arizona-New Mexico border. I started a bit later than expected from Tucson and the light and the temperature were already falling fast when I pulled into Clifton, which is situated in a narrow red canyon -- almost a slot canyon -- above the sea-green Gila River. Clifton has scores of magnificent Victorian buildings -- almost all abandoned -- lining a central braid of road and railroad. Anywhere else in Arizona, these would all be art galleries and boutiques. Why not here?

The answer was just up the road -- literally. I generally think of a mine as something that lies below the ground, but the Phelps-Dodge mine is in mid-air; you climb through it on your way out of town. I careened around obscenely deep chasms, through rickety tunnels and under massive spires of rusted metal spewing slag for what seemed like five miles. A few Star-Wars-like vehicles could be seen clawing their way up the sides of the chasm. Otherwise, I had the road to myself. Such as it was. It certainly doesn't deserve to be a numbered highway. It's barely one vehicle wide, with no shoulders and no guardrails, and it's literally one hour of 15-mph hairpin turns.

Mercifully, by the time it got dark, I was on top of the ridge where there were plenty of trees to break my fall if I slid off the highway. I don't even know the names of these mountains. I've never heard of anyone hiking here and the trails aren't mentioned in any guide books. But this must be one of the largest ranges of +9000 foot peaks in Arizona. It took another two hours before I dropped DOWN to 8000 feet in Alpine, Arizona. Air temperature: 20 degrees — eek! No question of camping in Consuela that night.

The only free room in town was at "Tall Wee Wee" (Talwiwi) Lodge. All the restaurants were closed, so Thanksgiving Dinner was leftover cold Coq au vin, sliced tomatoes with Bulgarian pepper, fresh dates and a glass of sherry in my room. Not too bad actually. Then I listened to the elk hunters locking horns or whatever and finally fell asleep.

Next morning there was fog on my windshield--remember fog? And ducks on partially frozen ponds and big fir trees on either side of the road. A couple of times I drifted off and thought I was back in northern Quebec. I passed by Pueblo Park Campground, which has a trail to a mesa top where you can collect gem-quality Bytownite crystals. But the ground was frozen, it was a six-mile drive to the trailhead, and I was driving a 22-year-old vehicle. A bit past my comfort level. Maybe next time. 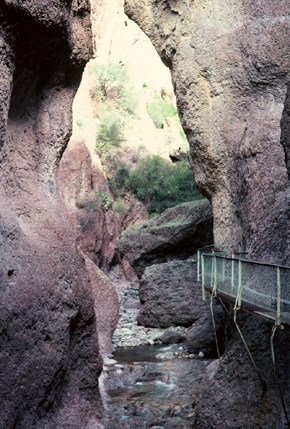 I did drive into Mogollon, which was quite picturesque and much larger than I imagined, but everything was closed for the season. I also hiked to the end of the Cat Walk in Glenwood. I had hiked this trail before but it was even more spectacular than I remembered, especially with the fall colors.

That night I camped at Faywood Hot Springs, halfway between Silver City and Deming. It wasn't much to look at from the road, but the tubs themselves were numerous, deliciously hot and beautifully landscaped. Hot springs attract an interesting combination of people: old hippies, New Age world travellers, and some conspiracy theory-survivalist types who give me the creeps but are basically harmless. On this trip I also ran into quite a few young retirees who live in their RVs and were on their way to spend the winter on BLM land in Arizona or LTVA land in California. I don't know if I could live that life — I think I'd miss the clawfoot bathtub, the creak of the hardwood floors, and cats tiptoeing across my keyboard — but I certainly admire them for doing it.

Saturday it was off to hike at Rockhound State Park, where I think I did find one actual geode, a kind of knobby powdery pinkish egg-shaped stone. But I also spotted a rock shop that I thought I recognized from, "Food-Gas-Lodging," one of my all-time favorite movies. Turns out the entire movie was filmed right there.

I continued on across the border to Palomas, where it was the usual three-ring circus to renew my six-month car permit and tourist visa. It's a game of wills. The border guard's job is to come up with reasons why you can't have a permit to travel in Mexico. Your job is to cheerfully comply with every silly requirement he invents until you finally wear him down, and he has no choice but to issue the permit. Coming prepared with multiple photocopies of every possible document he might demand only makes it worse; you don't get extra points for being a smartass.

I celebrated with a big Margarita and chicken and green chile enchiladas TO DIE FOR at La Tienda Rosa ($7.00 tax included). 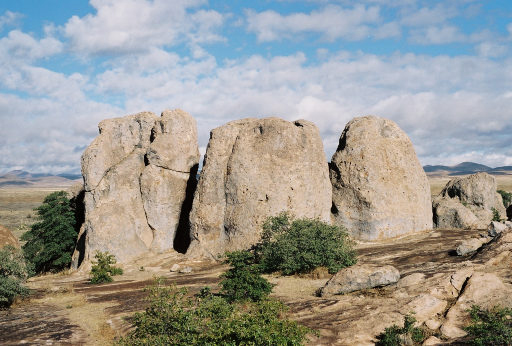 Another night at the hot springs and then a trip to nearby City of Rocks State Park. City of Rocks is an outcropping of volcanic spires and hoodoos that looks like a giant stone hedgehog from a distance. The camping spots are carved into the rock. 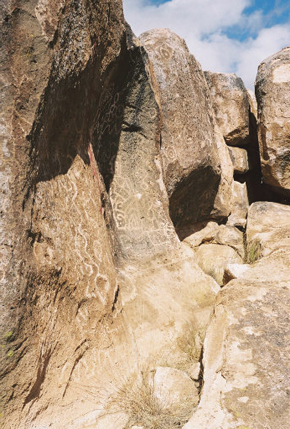 About four miles north of the park, there's the largest collection of pictograms I've ever seen carved into a cliff above the highway. Look for the Pancho Villa graffiti.

I returned to Tucson via Glenwood and the very scenic Mule Creek Pass. Consuela ran great and gave me no trouble at all other than a slightly sticky hood latch. I thoroughly enjoyed my little expedition. Certainly there were things I would have done if I hadn't been alone -- particularly some of the more adventurous hikes. And there were a lot of moments when I wish there had been someone (besides Consuela) to whom I could say, "Wow! Look at THAT!" But overall I enjoyed my own company and felt "alone but not lonely." Mission accompli.