We were packed and ready to go a full week ahead of time. Three days of backpacking meals were bagged and labeled and loaded in my pack. Meanwhile Dennis had loaded the second-hand iPad that now doubles as our GPS with high resolution digital topo maps. We arranged to meet our fellow hikers at Blackjack Campground at the top of Mule Creek Pass on Thursday night, and Friday morning we'd continue to a trailhead near Alma, New Mexico.

But meanwhile the forecast was steadily deteriorating, and by Thursday afternoon the probability of precipitation had increased from 30% to 80% for the first day of the hike. But what's a little rain to people who live in one of the world's major deserts?

I don't know what prompted me to call the ranger station in Glenwood, but when I did, I learned that the same tropical storm that was making headlines in Colorado was also wreaking its share of havoc in Southern New Mexico. The ranger told me there were flash flood warnings in effect for the Glenwood area through midnight Saturday.

"Hmmm," I said, "maybe we'll move this trip to the east side of the Gila Wilderness and do something along Grapevine or the Middle Fork."

"I'm glad you asked," said the ranger. "I just heard that the Grapevine and Middlefork Campgrounds are closed due to flooding.

I spent the last hour before we left Tucson frantically printing maps and directions for a possible alternate trek on the Arizona side of the border, where the chance of rain was only 30%.

We arrived just before dark at Blackjack and found it totally deserted. We had time to gather wood and build a nice campfire and even spend an hour or so enjoying it with Tom and Olivia before the sky exploded into a violent rainstorm. It rained not just cats and dogs, but elephants and hippos all night long. We woke up in a dense cloud, and we could hear a waterfall roaring in the canyon at the edge of the campground. Max, Noreen and Dave joined us after breakfast, having arrived well after dark the previous evening, but fortunately just in time to set up their tents before the storm broke.

Together we reviewed the various options. The sky was clearing. We could take a chance on our original destiantion. Or, we could switch gears and explore Eagle Creek on the Arizona side, where the chance of rain was much less, and where a friend recently made us a gift of detailed directions to a historic ranch. Or, we could do a day hike and then head for the Gila Wilderness on Friday night, by which time surely the storms would have passed and streamflows would have returned to normal post-monsoon levels.

We dialed up NOAA on Dennis' ham radio rig. We called Dave B. in Tucson and asked him to check the extended forecast. We even called the general store in Alma to inquire about the water level in the creek. She said the water was running high, but not exceptionally so. The forecast was also inconclusive; down to 60% POP for Friday, but holding steady at 60% for Saturday as well.

Eventually we decided on a day hike along Eagle Creek, with an option to make for the Mogollons depending on how the weather unfolded Friday afternoon. By then it was nearly 11:00 am.

In dazzling sunshine broken only by a few puffy white clouds, we wound our way through the endless awfulness of Clifton and Morenci and located the tiny backroad that snakes around behind the mine to tumble into Eagle Creek. But at the bottom of the canyon where our babbling brook should have been, there was an angry, oily black torrent of trees and mud about 80 feet across, erasing the route downstream.

About three hours earlier, this stream, which normally carries no more than one or two feet of water, had suddenly swelled to 7000 cfs (or about five feet above normal flow). NOAA was issuing warnings of flooding along the Gila River as a result of the extraordinary discharge from Eagle Creek.

Had we broken camp at 9:00 am as planned and hiked into this canyon, we would have been stuck on the other side — assuming we weren't washed out of the canyon altogether. 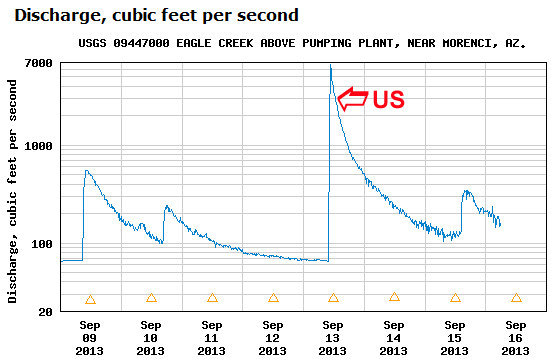 At this point my brain should have processed the fact that Eagle Creek is fed by streams that rise on the Mogollon Rim, where the Bear Wallow Fire ripped through more than 500,000 acres in 2011. Instead, we headed for the trailhead as planned, assuming the rain had stopped and the floodwaters had subsided.

The creek was running hard, with the same oily black discharge as we observed at Eagle Creek. About a mile from the trailhead, two streams converged where the road should have been. Boulders groaned as they rolled over the pavement, and full-sized trees drifted by.

It was the end of the road, and I was out of ideas. But I remembered the Glenwood ranger proposed Pueblo Park as an alternative to hiking in the Gila Wilderness. We backtracked to the Alma Store, stocked up on water, and located Pueblo Park on a map of the Gila National Forest, on a green finger of the Blue Range Wilderness that points across the Arizona-New Mexico border. Partway up the road to Pueblo Park, we spotted a luscious camping area near the confluence of two streams, and made camp just in time to enjoy dinner and some time around the campfire before, once again, the heavens unleashed a violent thunder, lightning and hailstorm.

We awoke to clear, fresh-washed skies in a forest that reminded me what the mountains of southern New Mexico and Arizona were like a dozen years ago, before virtually every major Ponderosa pine forest was scarred by catastrophic wildfires. Our campsite was ringed by fragrant pines towering some 70 feet or more above our heads. A riot of summer wildflowers tossed their lovely heads amid the tall grass and wrapped their tendrils around my ankles as I made my way down to the stream.

Clearly, the bad weather was behind us, and it was all systems "go" for an exploration of Pueblo Park.

We hadn't hiked more than a few hundred feet down the W.S. Mountain Trail before we came to our first problematic stream crossing: a tangle of downed trees and brush at the confluence of two obviously flooded streams. But the water was warm and the sky was blue, so we made a quick trip back to the vehicles for our water shoes and ventured across.

And so it went for the afternoon: one thrilling stream crossing after another in rushing thigh-deep opaque amber water, punctuated by stretches of streamside hiking on a well-cairned trail.

We took a nice long break at lunch and Dennis set up the 80-meter rig, but all we could hear were lightning crashes, and a big black cloud was boiling up on the horizon. Much as I had enjoyed all the time in the water, some of the crossings were at the very edges of our capabilities; any deeper and we'd be stuck in this canyon.

We cut our hiking time in half on the return trip, avoiding some crossings and bushwhacking along the steambank. We even squeezed in a quick trip to Reserve for a beer at Uncle Bill's Bar before retreating to our home base in Cottonwood Canyon, where we were promptly driven into our tents by yet another violent thunder, lightning, rain and even hailstorm, this one lasting even longer than those of the previous evenings. It rained so hard it seeped through the camper shell on the TacoMa, and Noreen dreamed that she was sleeping on a waterbed while the local wash detoured under her tent.

The morning, of course, dawned clear and sunny. Tom and Olivia opted to return to Tucson, while Max, Noreen, Dave, Dennis and I bushwhacked up Cottonwood Canyon in search of a non-existent trail that should have led over a ridge into Dangerous Camp Canyon, but instead just led us to the top of a hill with sweeping views of lush canyons capped by cliffs of buff-colored basalt.

Before breaking camp, we wandered down to the confluence where we found some bathtub sized pools, marveling at the differences between the two steams that passed through our campground; one pale amber and warm, the other milky and at least five degrees cooler.

Our plan was to take a drive up to Mogollon for burgers and slaw at the Purple Onion. But when we reached the turnoff for Bursum Road, it was closed on account of flooding. Of course.

Our fallback was the Alma Grill, but it was only when we backtracked to the store that we realized what must have gone on there the night before. The road was a muddy mess and bucket loaders were wrestling with a giant culvert that had slipped loose from its moorings. The Alma Grill was closed and the owner was busy cleaning up after seven inches of rain flooded the restaurant. A muddy streambed marked the former location of the road we had driven Friday afternoon with the intention of setting out on a two-day backpack. The owner of the Alma Store &mdas the same lovely lady who answered our call on Friday and later sold us maps and bottled water — wondered about the fate of people living along the creek, or those who may have been hiking in the area.

It could have been us.

The next possible stop for a very late lunch was Silver City, where we found every restaurant closed on account of the annuall "Pickamania" festival. But after three days of dodging floods, I guess we had learned to "go with the flow". We ended the day with dinner from a food truck and dancing to the music "Solas".

Here are excerpts from a note from a fellow ham radio operator who follows our adventures with an APRS tracking device:

What an odyssey! Adele was worried about you guys after my discussion with Dennis on the cell phone. I told her that with the experience you both have with desert wilderness and Dennis' go-no-go private pilot experience, that you were in no danger. We didn't start praying until Dennis' APRS went off the air for more than a day and the weather looked really bad where you were intending to hike.

My faith in your intrepidity as serious hikers was rewarded when the truck reported back in Sunday evening when you were stopped in the parking lot, that, according to Google, was an emergency medical center in Safford. Once again Adele was worried but I told her that the Google map was probably old and the building had most likely been converted into a micro brewery or some hole-in-wall restaurant where you guys tend to look for new dining experiences.

We checked again later and were pleased to see the truck was on I-10 headed West. The only thing unusual was the truck ws traveling 78mph, Which is not typical of Den. Well, we made the assumption Marion was probably driving and Den was probably sleeping. Since it was close to our 9:00 bed time we shut down the computer and went to bed.

Marion, thanks for the great video. Dave and Adele.