We were invited to lead a hike with a group of friends from Tucson who were staying at Wilderness Lodge. Why not stay over and continue exploring the area? 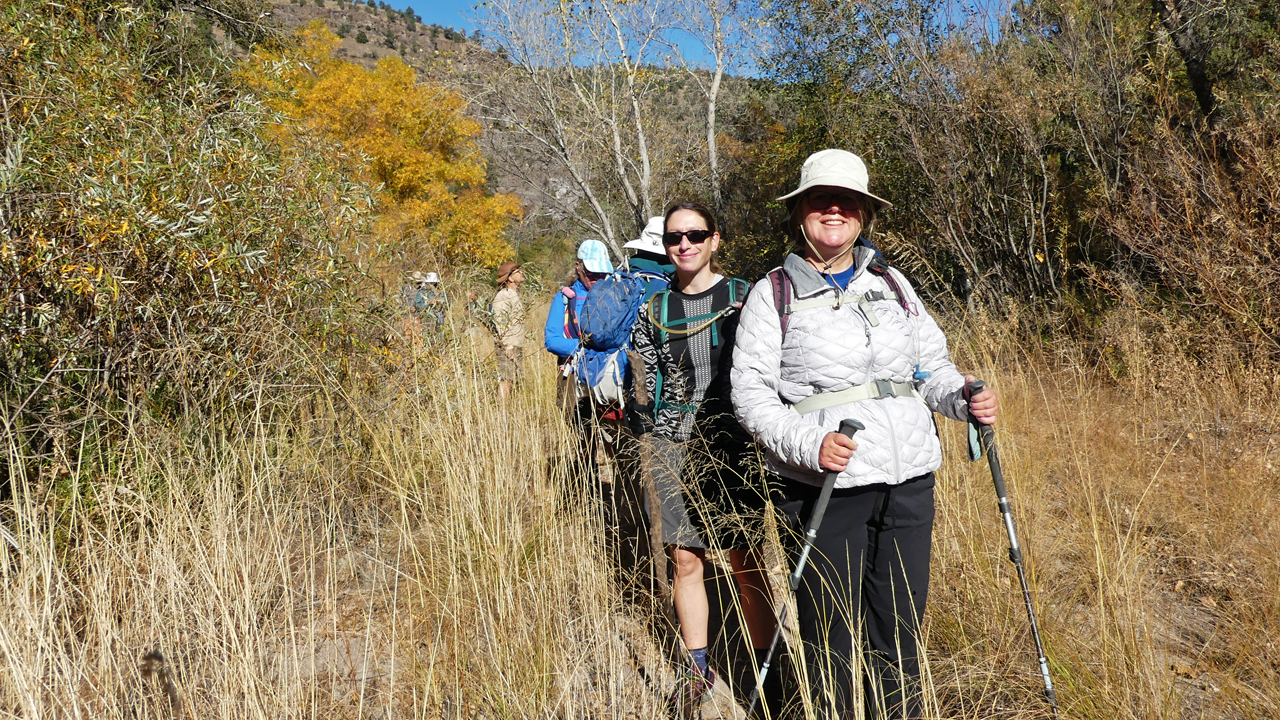 We chose the Gila River Trail south from Grapevine Campground, which we scouted two weeks ago. 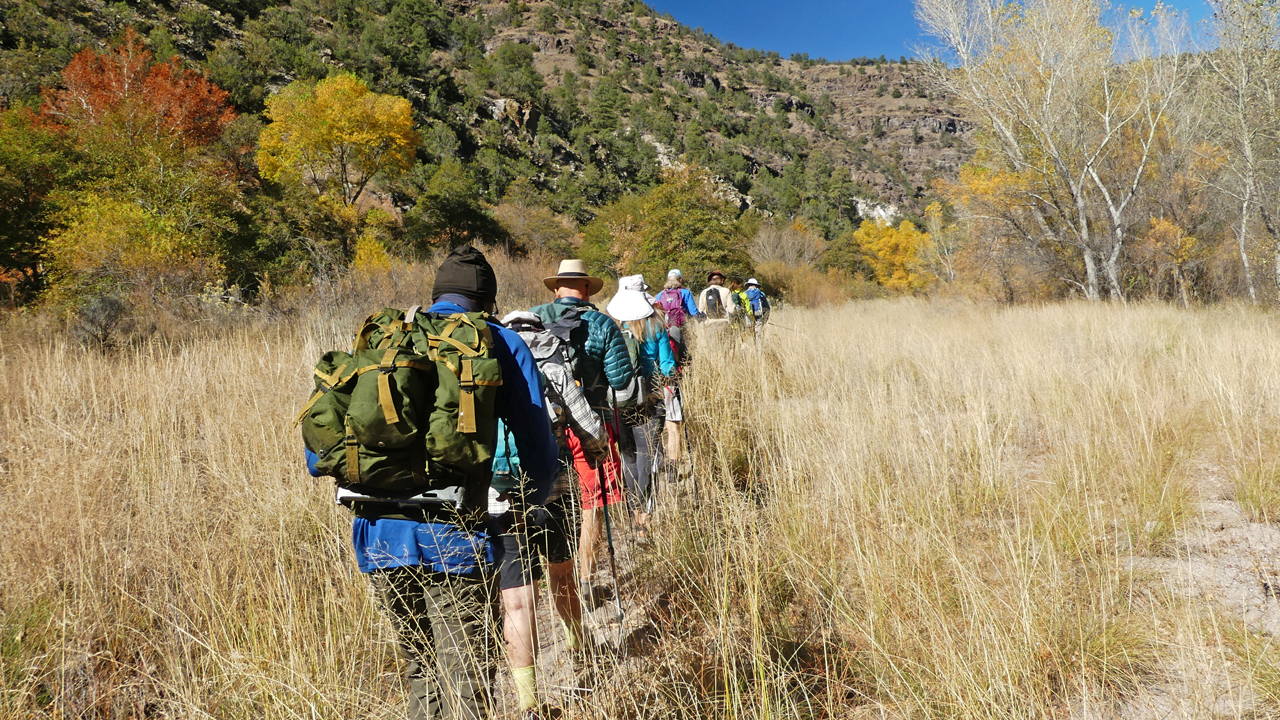 But since then, the temperatures have cooled off considerably. It was 28° when we met the group at 8:30 Saturday morning. 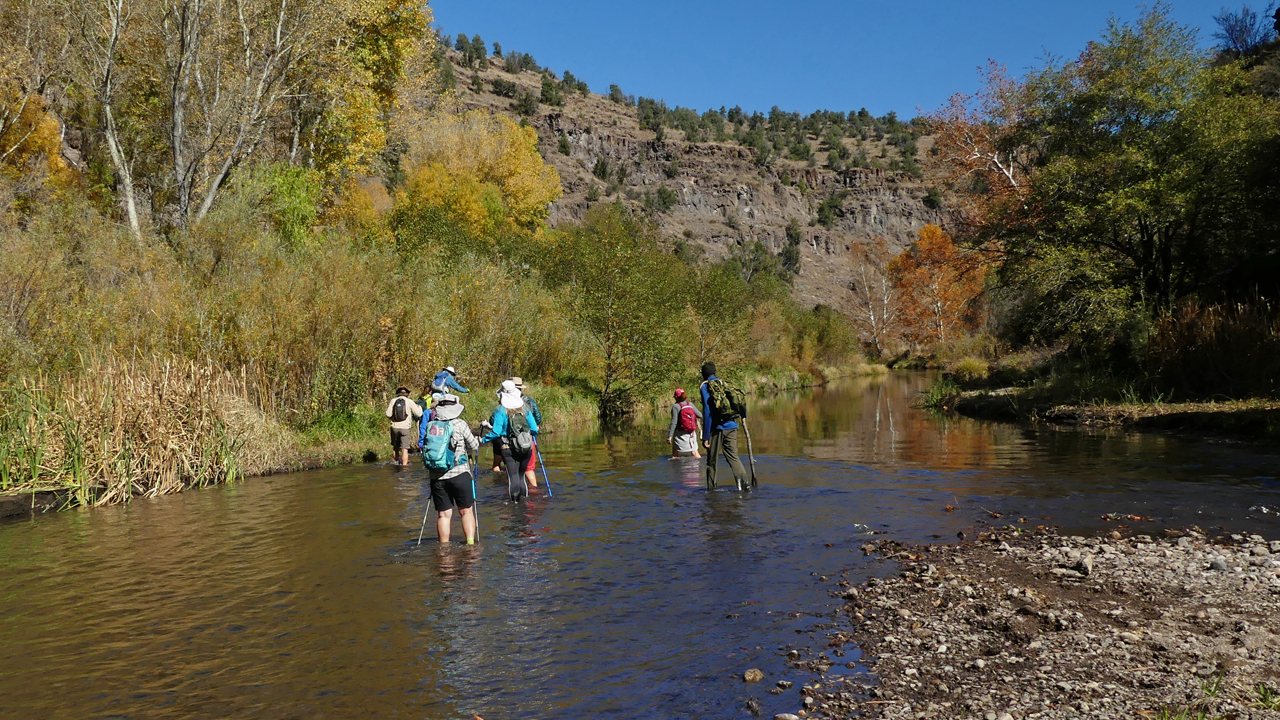 And the water level had not gone done at all. It was still knee- to thigh-deep at most crossings. 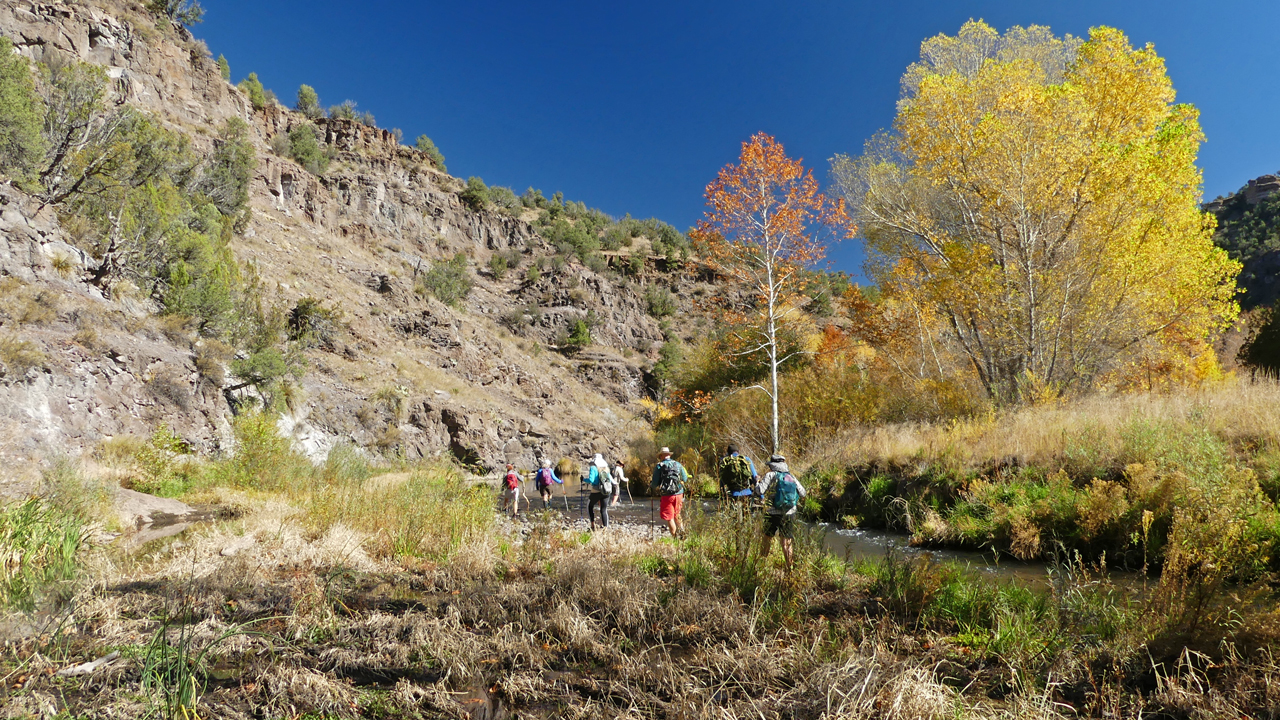 We took a long break at the small warm springs to give everyone a chance to sit in the sun and recover. We ultimately decided to return the way we came rather than continuing to Alum Camp. 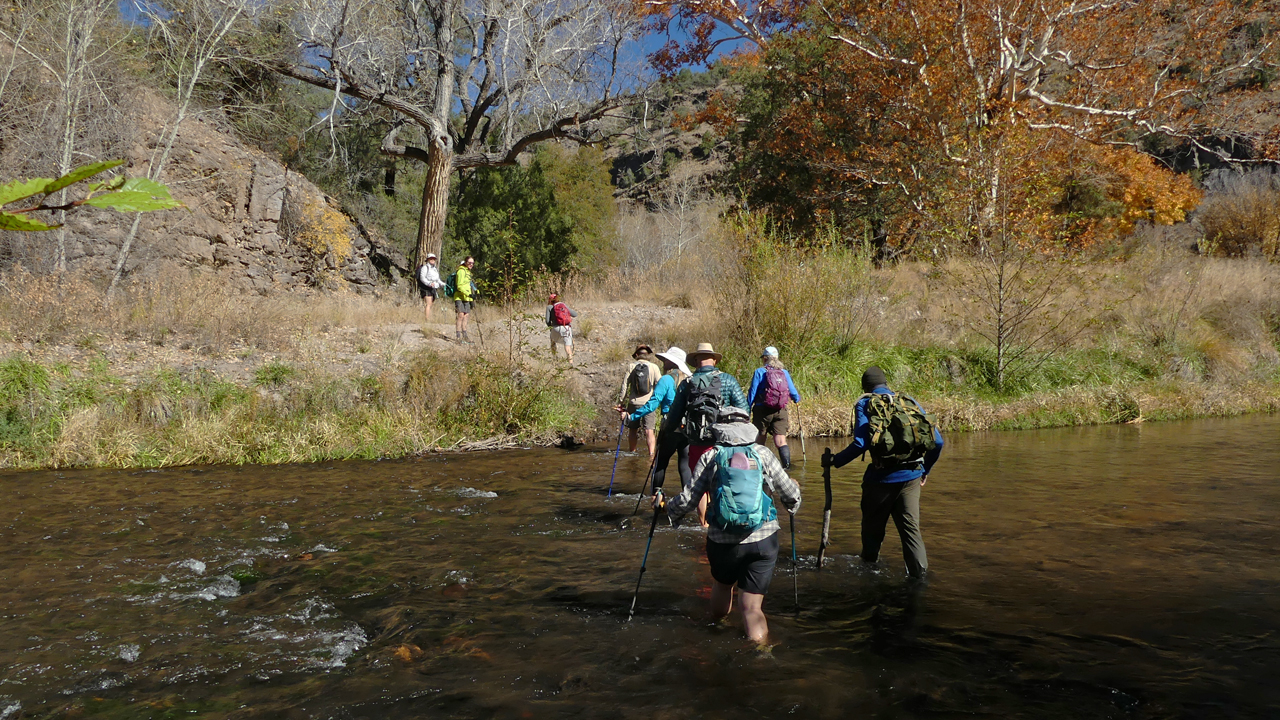 The rest of the group moved on to the Gila Cliff Dwellings, while Dennis and I peeled off and headed for a hot springs on the lower Middle Fork. 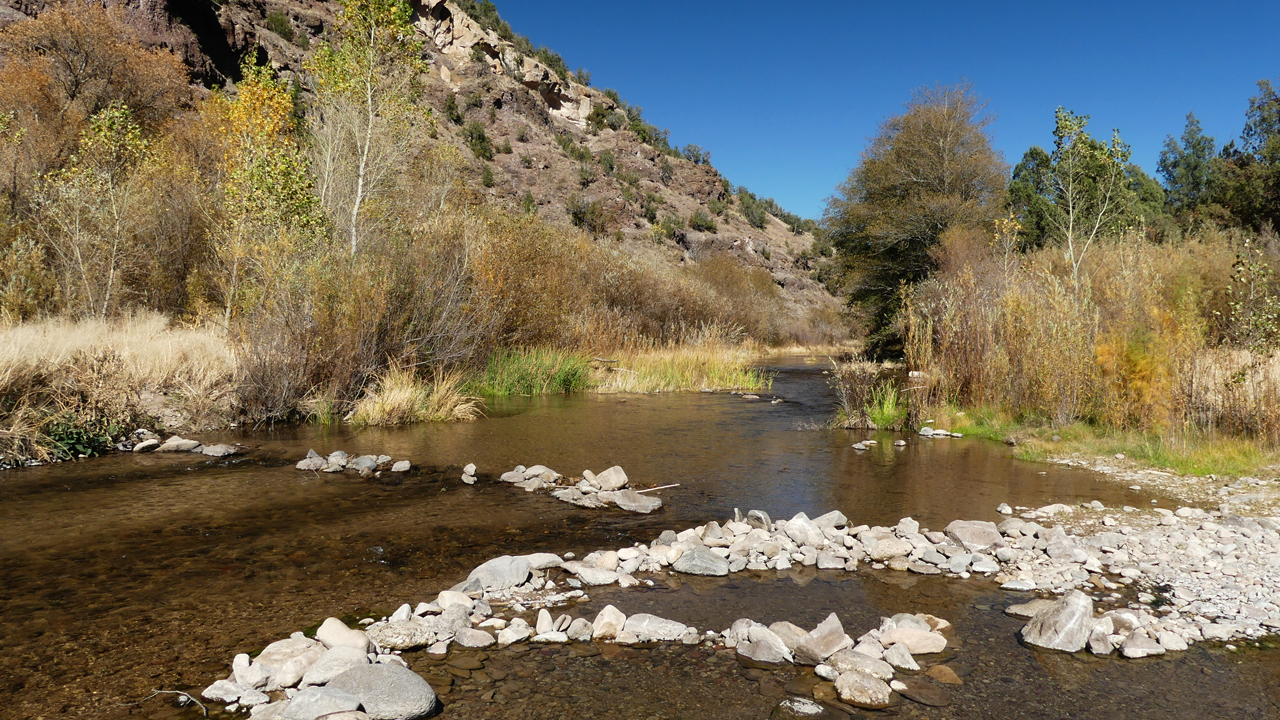 Conditions vary widely here, and these pools are often either dried up or impossibly hot. 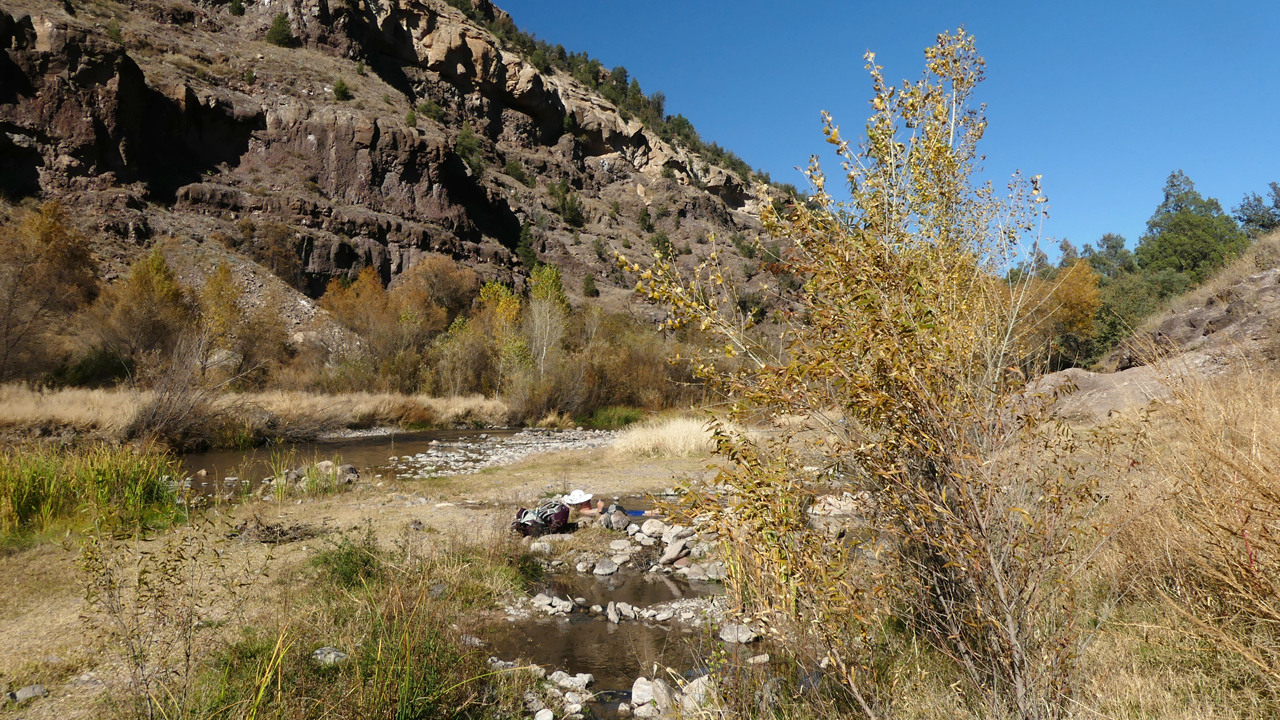 However, someone had engineered a string of pools with decent depth and a range of soaking temperatures. It felt great after our very chilly morning excursion! 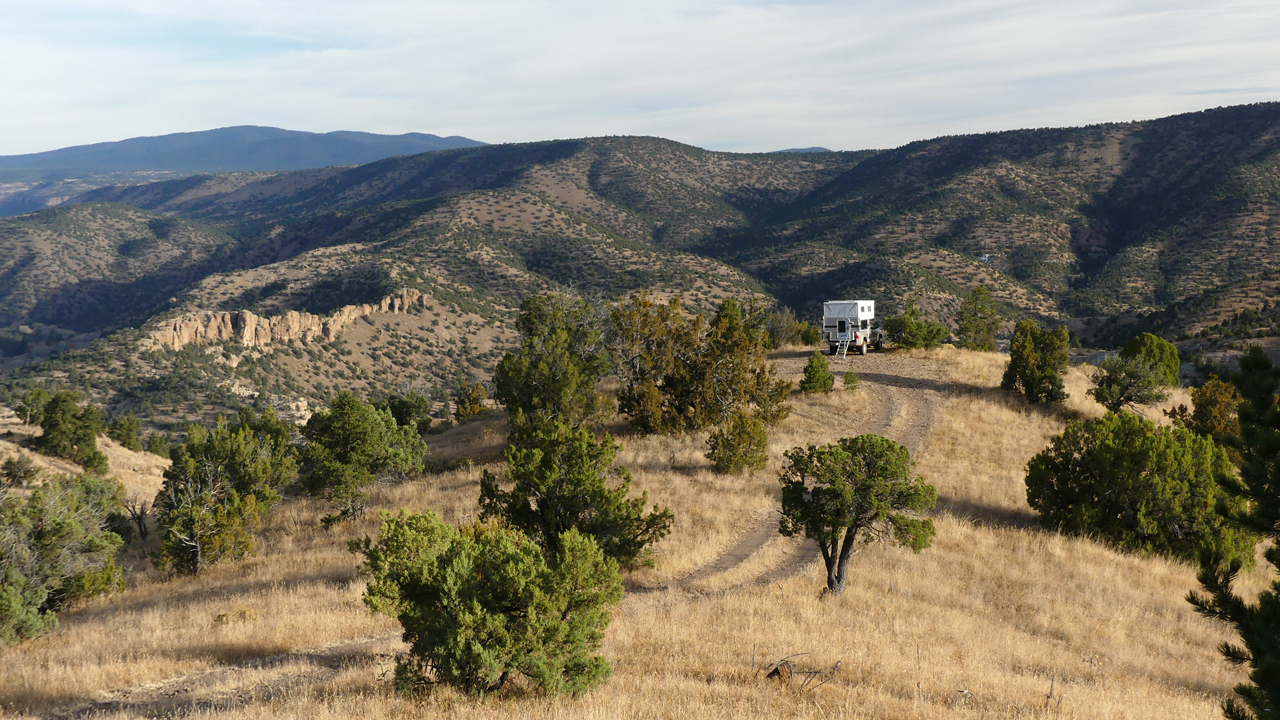 We camped at our new favorite campsite, on a promontory with an incredible view of the Gila River Valley. 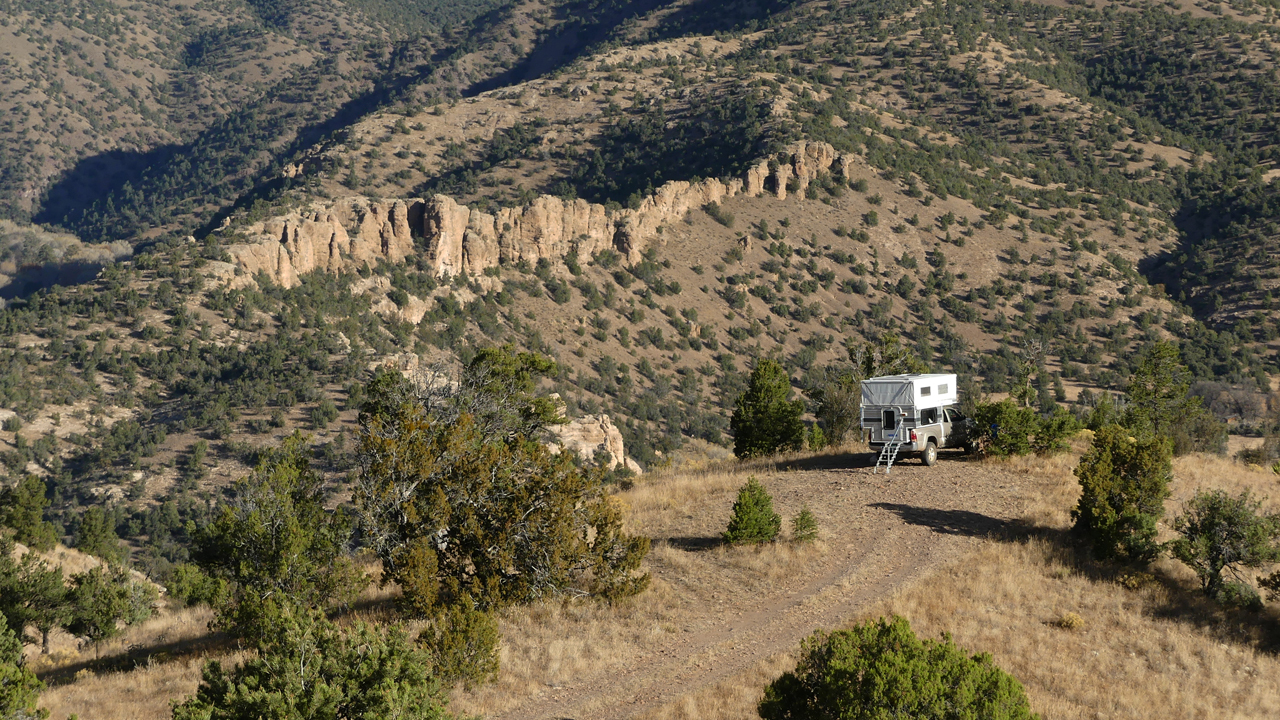 It was a delightfully chilly night, with a gazillion stars and a very visible Milky Way. I've admired these slot canyons for as long as I've been coming to the Gila — more than 20 years! Might this perch provide access? 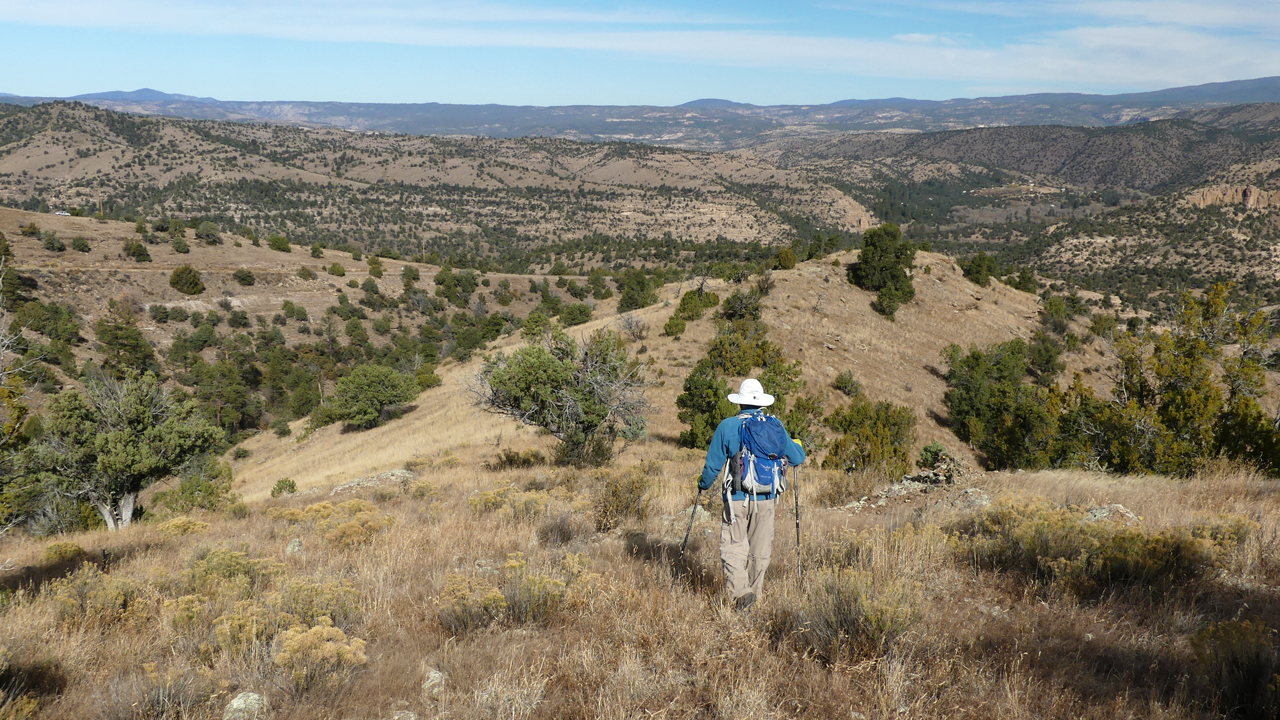 Take it from the top! 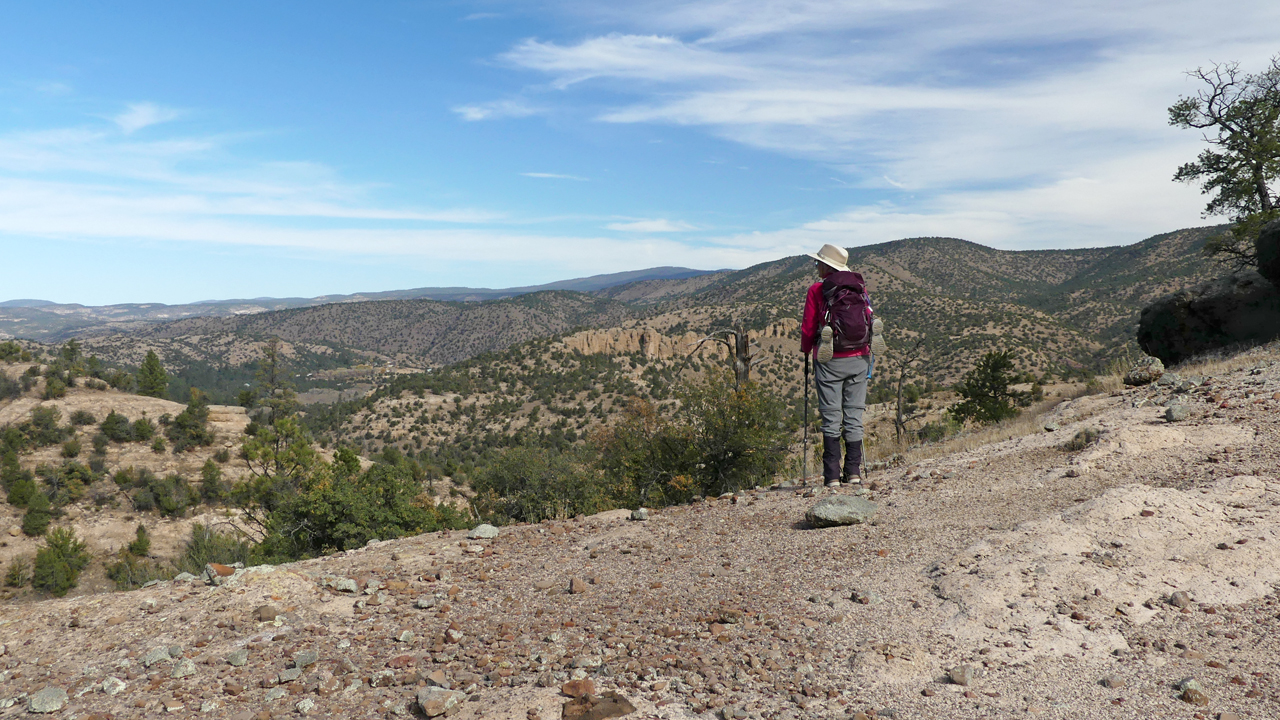 It was relatively easy going along the nose of the ridge, but the canyon walls fall away sharply near the bottom. 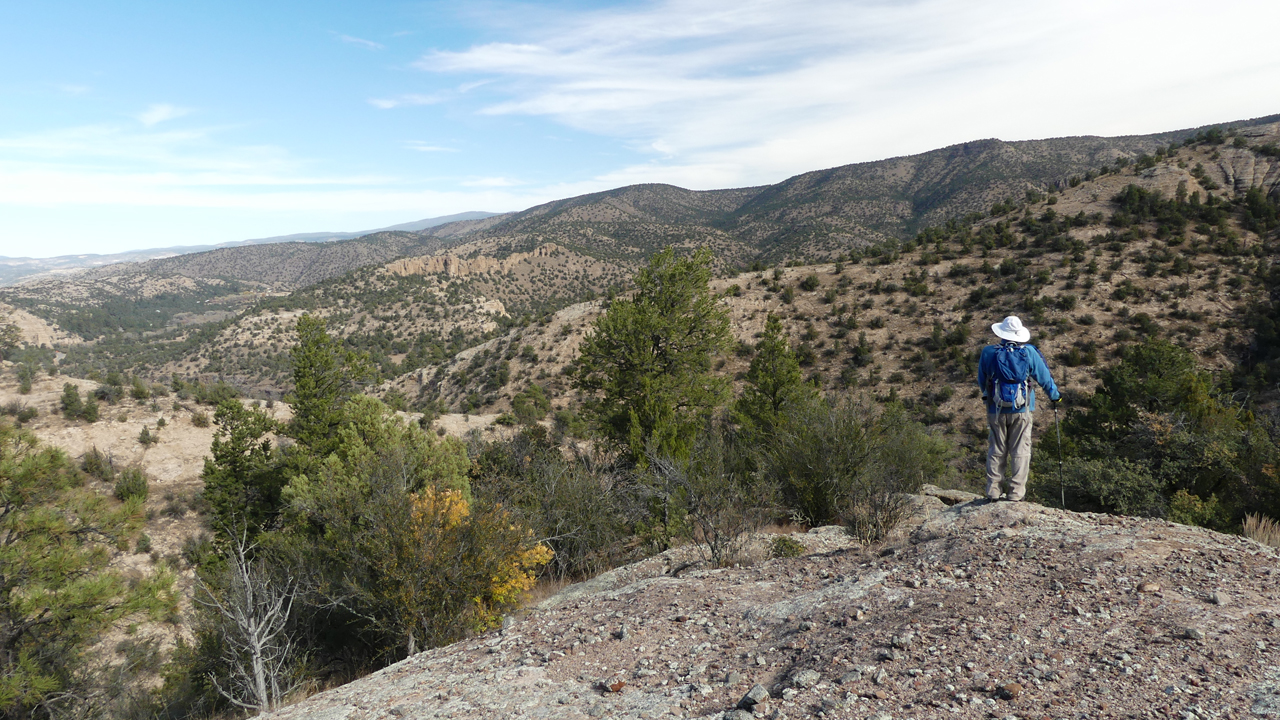 Sure enough, we cliffed out after dropping about 300 feet.

Okay, take it from the bottom! But first, a little puddle-jumping. 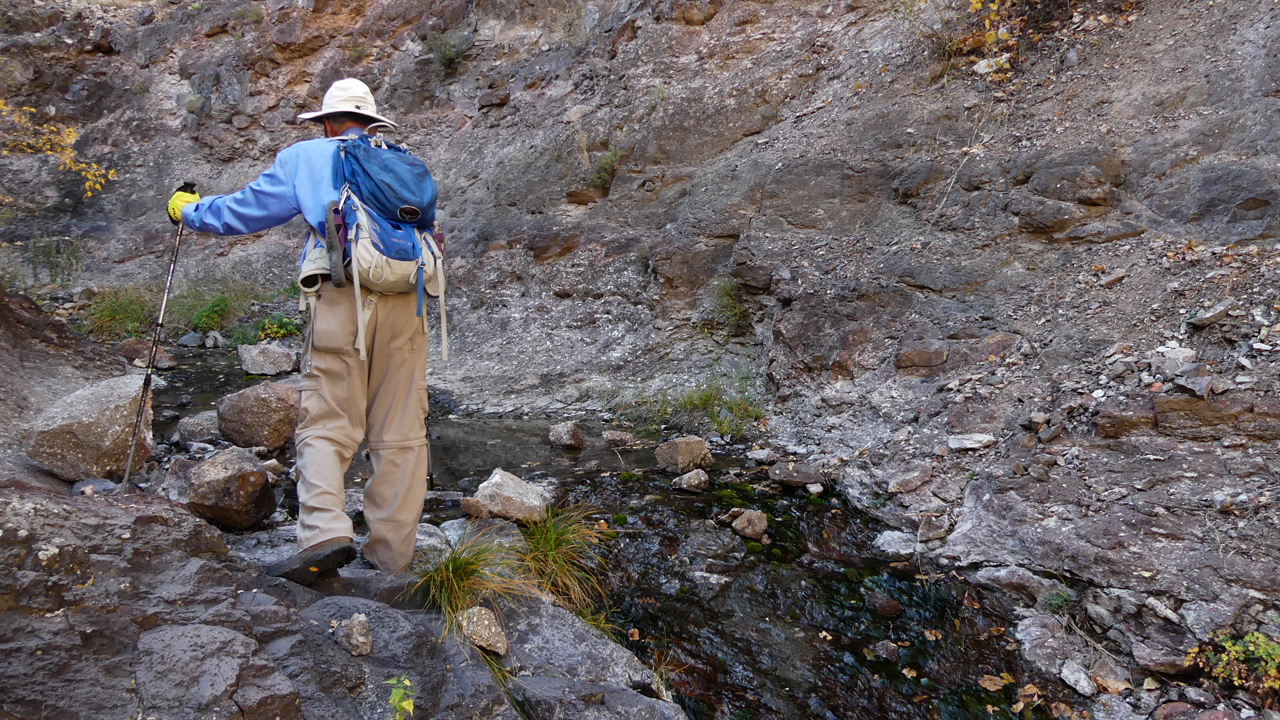 The first part of the canyon was uninspiring — wide and stony, but with a reasonable tread. 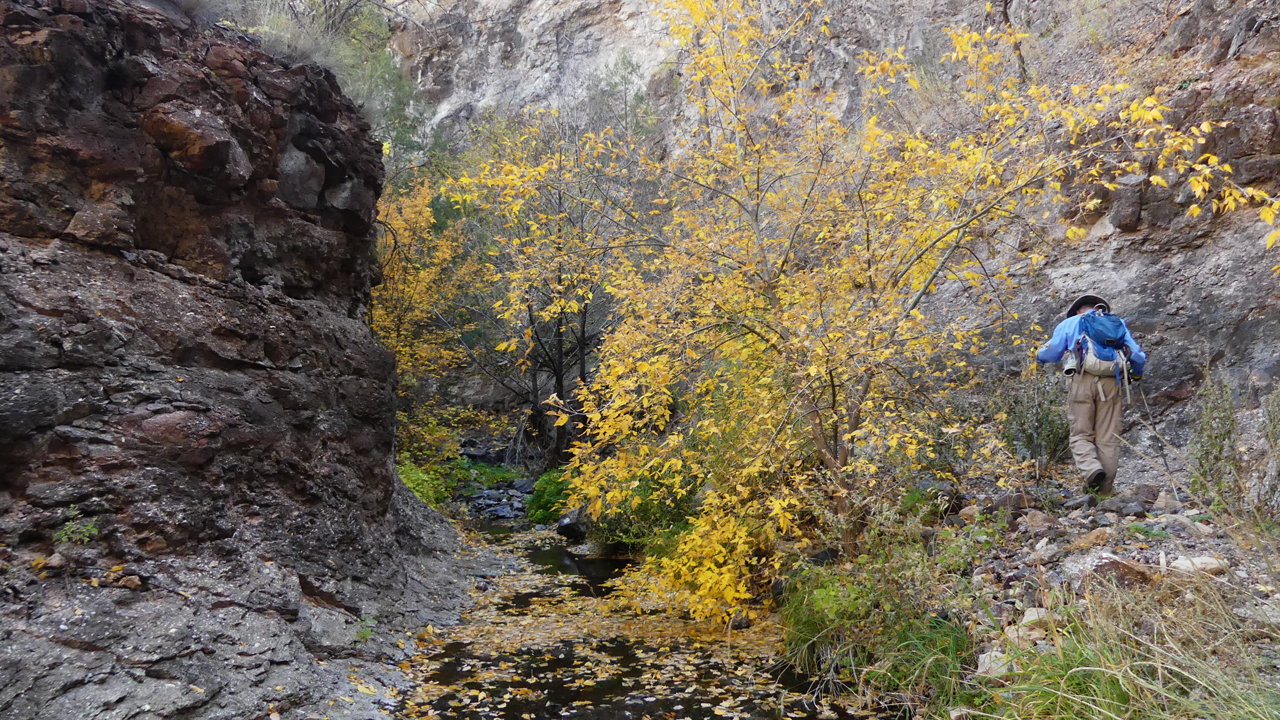 Gradually, the walls closed in, the temperature dropped 10 degrees, and a trickle of water appeared. 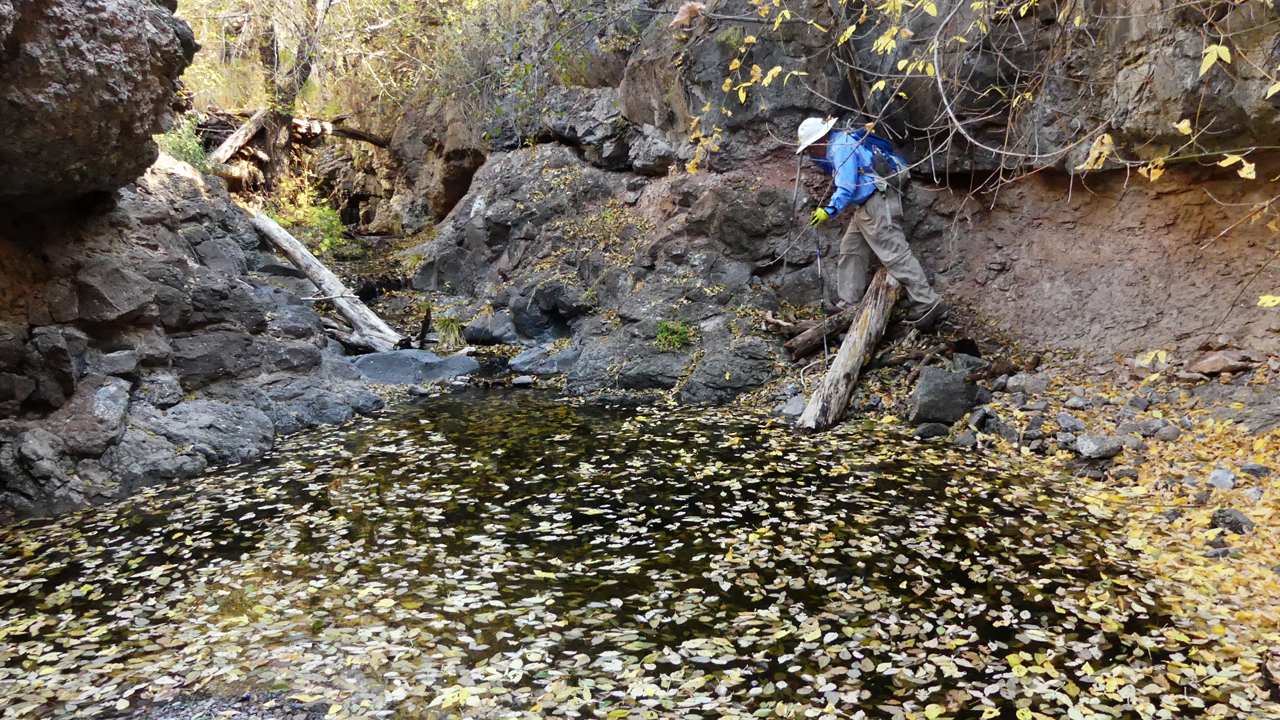 How lovely, with the yellow leaves floating on deep, inky pools! But how about a waterfall?

What a wonderful surprise! When you "play the slots", you never know what you might find! BTW, we learned later that the waterfall was less than 500 feet from where we "cliffed out" earlier in the day.