The Chaco Taco: Is it Camping, or is it a Suburb? 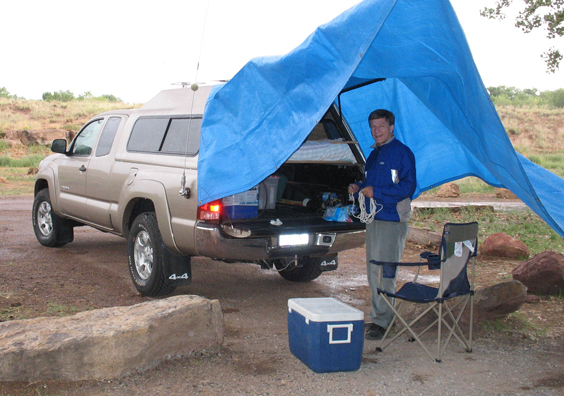 Before: A tarp provides some shelter from the storm while camping near Canyon de Chelly. 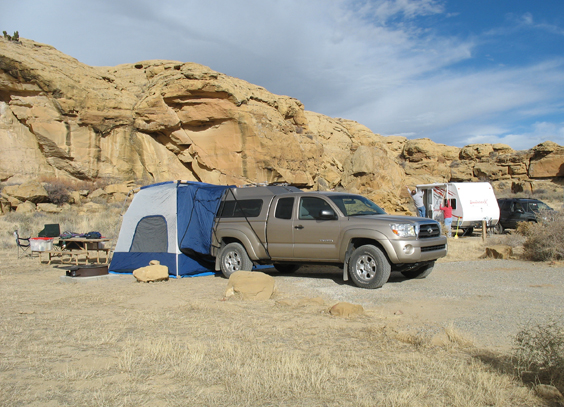 After: Introducing the Truck Tent, a giant nylon condom that cinches over the back end of the truck and provides a full-sized bug- and weather-proof LIVING ROOM. Does camping get any more decadent than this? 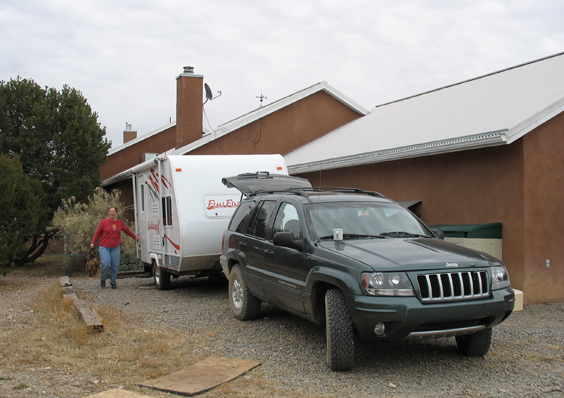 Well, our friends Tom and Ann have taken it to the next level with a 14-foot featherweight travel trailer that includes a refrigerator, stove, shower, gas furnace, microwave and a flat screen TV. 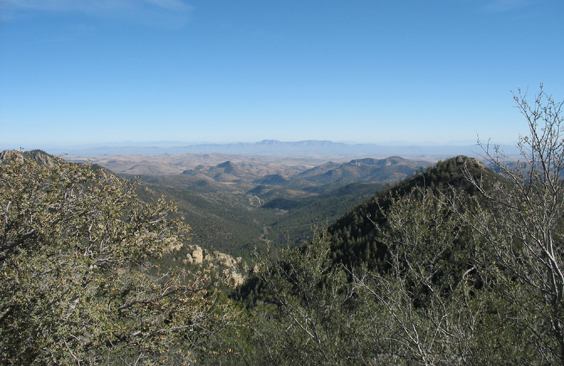 Both rigs made their first big trip to Chaco Canyon over Thanksgiving weekend. We left Tucson Wednesday afternoon, camping at our beloved Faywood Hot Springs as usual. After three good soaks and a chilly night in the Taco Ma, we made our way north via Emory Pass. 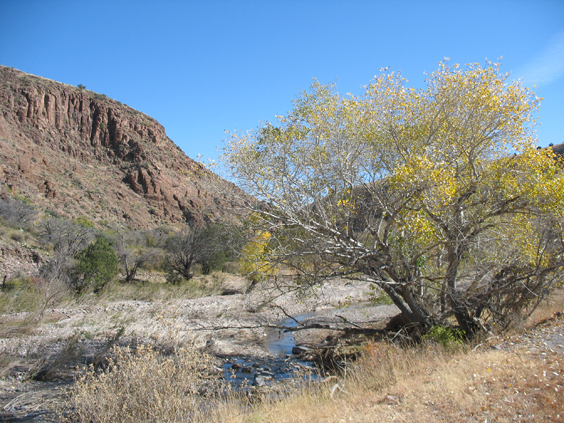 As far as I'm concerned, the Mimbres Valley is one of the loveliest areas anywhere in the Southwest, especially in the fall when the trees lining the Mimbres River glow like big yellow hot air balloons. 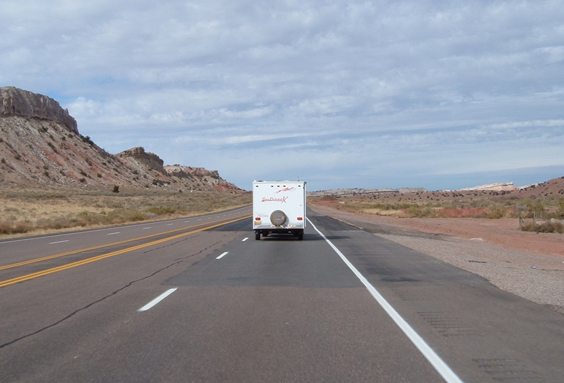 After a memorable Thanksgiving dinner in Edgewood, we packed up the dogs and headed for Chaco! 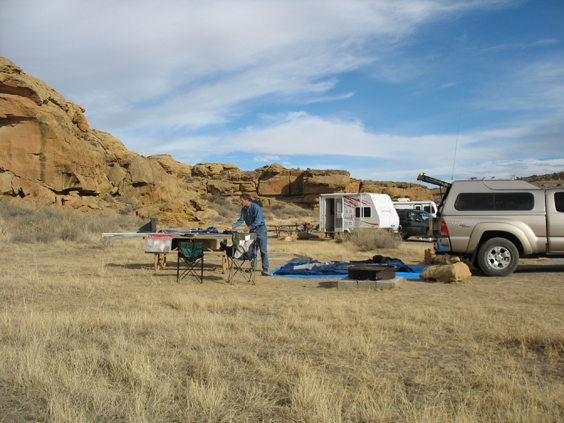 Fortunately we got an early start. Even on this chilly Thanksgiving weekend, there was intense competition for camping spaces in the park. We scored two perfect spots side-by-side at the base of a sandstone cliff. 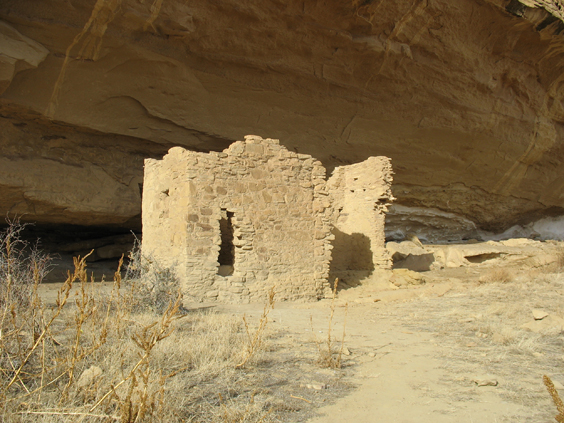 There were Anasazi ruins about 50 feet from our campsite. 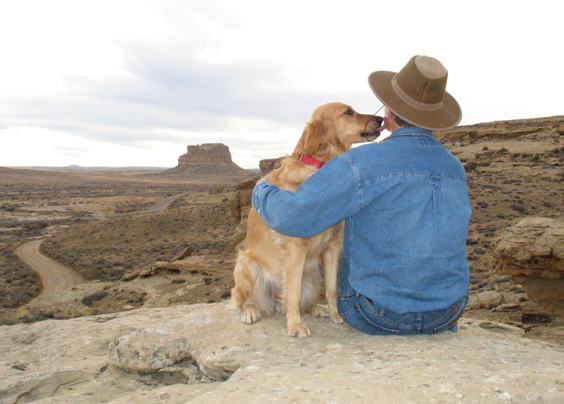 Dennis gets some tongue from Maggie on a sunset stroll to the top of the mesa. 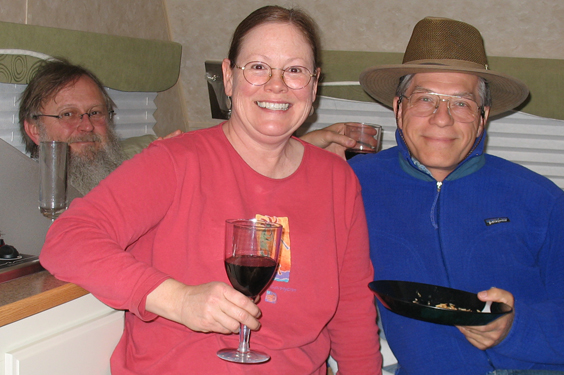 Partying down in the Funfinder. It was plenty cozy with Tom, Ann, Dennis, me and two golden retrievers. 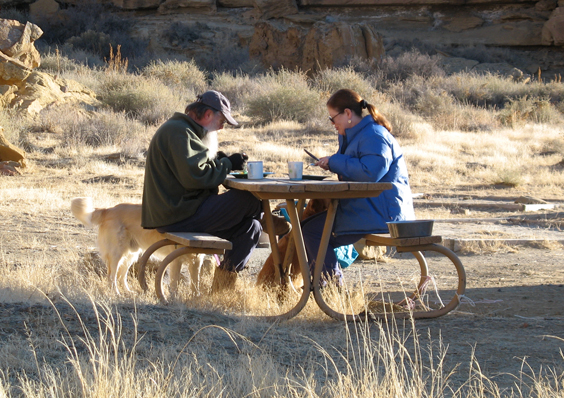 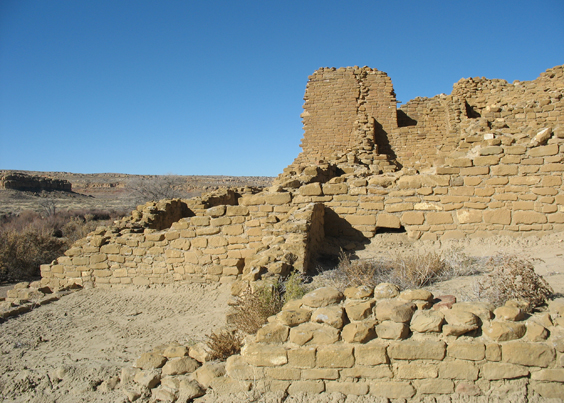 Then it was off to Kin Kletso and one of my all-time favorite hikes, the Pueblo Alto Trail. 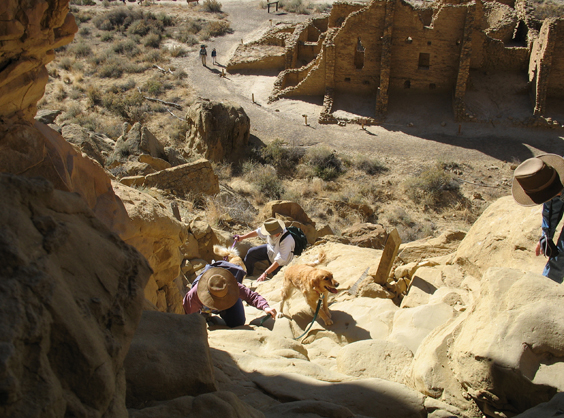 This 6-mile loop trail begins with a short but steep scramble up an ancient staircase in a fissure behind Kin Kletso. 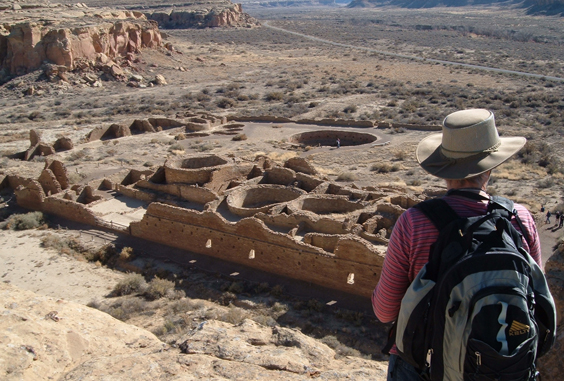 The trail runs along the rim of the mesa, affording bird's eye views of Pueblo Bonito and Chetro Ketl. Now on my fourth trip to the area, I am still dumbfounded by the grand scale of Chacoan architecture. These buildings were the castles of their time in North America, planned from the start and constructed over decades using very advanced masonry techniques. 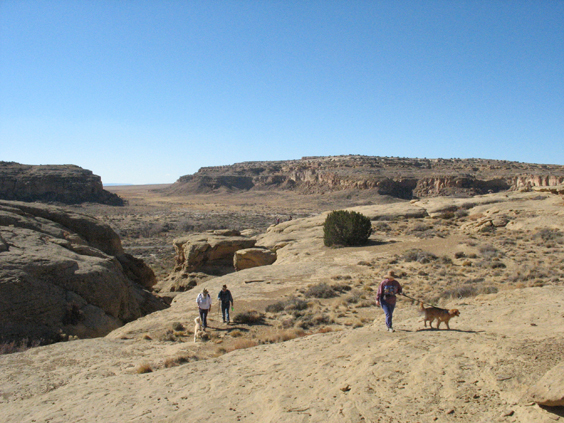 Pueblo Alto trail passes a hand-carved stairway that was part of an ancient system including more than 400 miles of roads that connected Chaco to outlying communities. 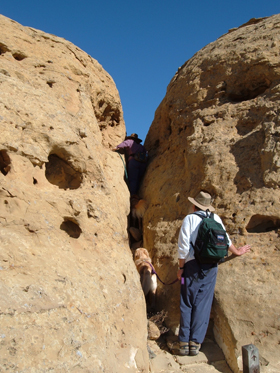 At about the halfway point, the trail swings inland and attains the upper mesa through another keyhole. While we passed easily, Charlie was too wide to fit through the narrow opening at the base of the crevasse. Like the Good Shepherd, Dennis slung 65-pound Charlie over his shoulders, and we were on our way. 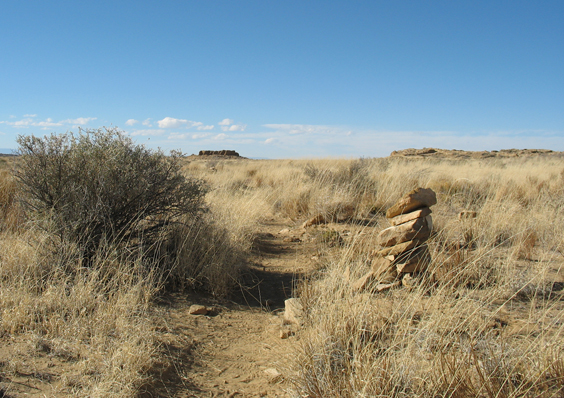 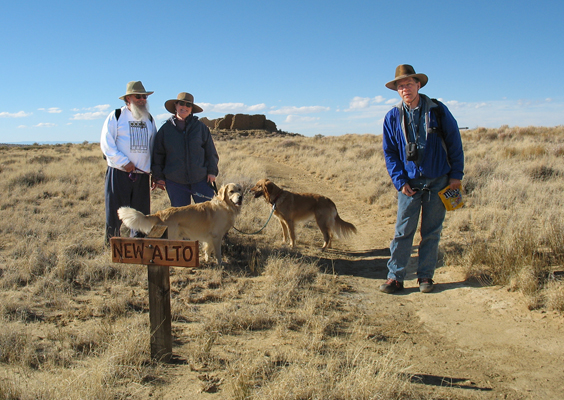 There are two sets of ruins at Pueblo Alto: one from the Chacoan period, and New Alto, constructed in the early 1100s. 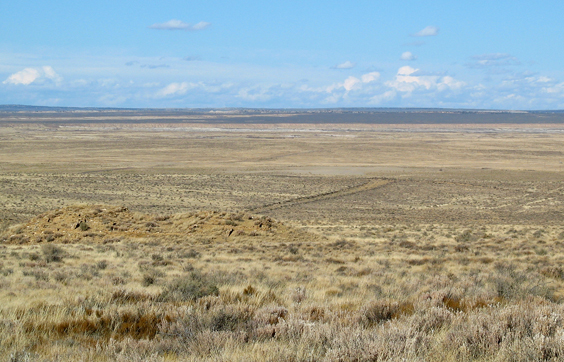 Why would they build in such a forbidding location, so far from water? We asked G.B. Cornucopia, an interpreter and park ranger in Chaco Canyon for more than 20 years. There was — and is to this day — a reliable spring on top of the mesa. Pueblo Alto was also situated at the intersection of several ancient Chacoan roads. With enhanced contrast, some of them are visible in the photo below. 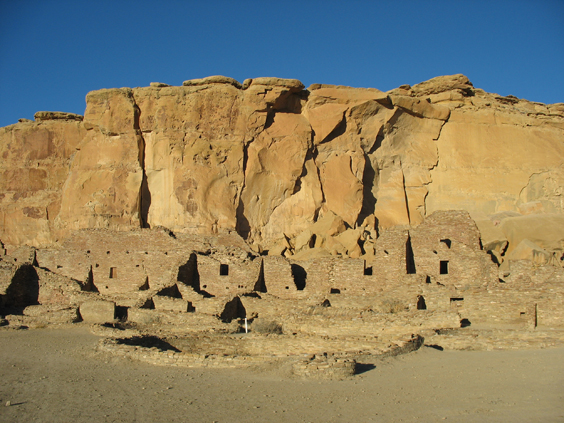 There was just time for a quick tour of Pueblo Bonito before sunset. 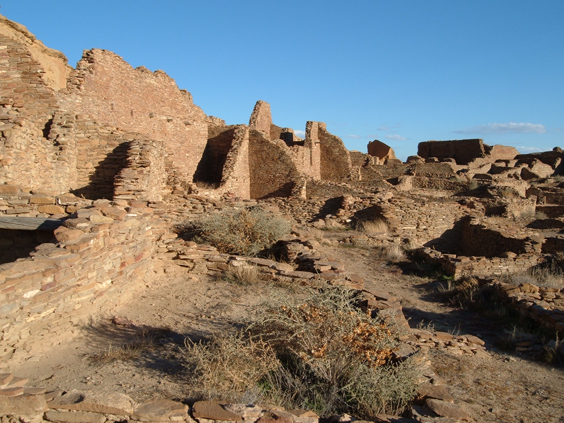 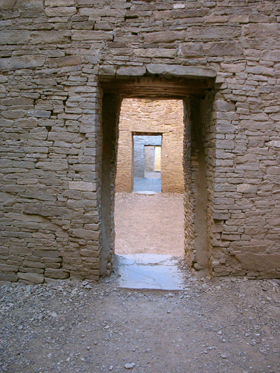 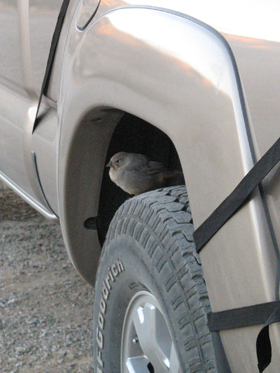 Farewell party in the Chaco Taco. We're looking forward to our next adventure with Tom and Ann.

From Chaco Canyon, we followed Route 7500, a featureless gravel road that goes from nowhere to nowhere. We passed right by the parking lot for the De-Na-Zin, or eastern section of the Bisti-De-Na-Zin Wilderness. There is no correlation between surface roads and most maps of this area.

We decided to give it one more shot and made our way north on 371 to the western, or Bisti Section of the Bisti-De-Na-Zin Wilderness. We were underwhelmed by the weather-beaten sign that marked the entrance to a large mud flat. Where the log book should be, there was nothing but a handful of stones, dead batteries and shotgun shells. I whipped out my new "100 Hikes in New Mexico" guidebook and re-read the glowing description of the Bisti Badlands.

Nothing to do but pack some water and snacks and head up the wash. In about a mile we began to understand what this area is all about. Quoting from 100 Hikes: "The duck-billed dinosaurs who lumbered across the muck 70 million years ago would be flabbergasted to see what's become of their claustrophobic swamp. Gone are the braided streams, giant turtles, and tree ferns; in their stead are rainblow-colored slopes of shale — the erstwhile swamp mud — dotted with living matter turned to stone."

This is one of those areas that makes me wish I knew more about geology. The piles of light gray rock underfoot looked like wood chips turned to stone. The rock in the dark grey veins looked and felt exactly like charcoal from a fresh campfire. In between there were stumps of much harder rock in shades of burgundy and white, with veins of pale yellow that might have been ... fossilized tree sap.

South of Crown Point, Route 371 crosses over an impressive ridge of red sandstone that must be related to nearby Canyon de Chelly.

With temperatures dropping rapidly, we decided against camping in favor of a night at the historic El Rancho Hotel in Gallup.

Constructed in 1937 by the brother of movie magnet D.W. Griffith, the El Rancho Hotel became a temporary home for many Hollywood stars who filmed in the area, including Ronald Reagan, Spencer Tracy, Katharine Hepburn and Kirk Douglas.

On a slow slide back to Tucson, we detoured through the Petrified National Forest and were dazzled by this under-visited national park.

It's hard to imagine that 225 million years ago, this windswept plain was a lush rainforest. 200-foot tall trees were buried in a sea of mud, and the wood was eventually replaced, cell by cell, with multi-hued silica.

Thanks to a tip from Joe of Joe & Aggie's Cafe in Holbrook, we took Route 77 all the way back to Tucson, eliminating Phoenix traffic and cutting our travel time to a mere four hours.