It Was the Worst of Times, It Was the Best of Maritimes

In the summer of 1989, I found myself living alone in a foreign country where I barely spoke the language. Seeking the solace that only a grand adventure could provide, I used the two-week annual "construction holiday" at the end of July to travel by train, ferry and bus from Montréal to Prince Edward Island. I picked up a rental bike in Charlottetown and bicycled across the island to Souris, staying at cozy bed and breakfasts along the way. One of my favorites was Kelley's in Morrell, PEI:

"Mrs. Kelley was a great host, pouring endless cups of tea and stuffing her guests with "bannick" and homemade strawberry jam. She also had a very interesting story to tell. The third Mary Kelley to serve as switchboard operator in Morrell, she occupied that post until 1976, when dial phones were installed. She still had the old switchboard in her living room. When her alcoholic husband abandoned her 12 years ago, she went back to school, got her teaching degree and raised nine children alone. She must have had a very difficult life, but she did not seem at all bitter or unhappy. On the contrary, she radiated warmth and inner peace."

In Fairfield, PEI, my hostess was Flora Campbell:

"Married young, she gave birth to 12 children, only to find herself a widow 16 years ago. For 25 years, she supported her family by harvesting Irish moss, raking it in while the tide was out and packing it in 10-pound bags. Her children worked beside her. She remembers when the pine forest bordering her land was a ploughed field. She watched it grow up year after year, first erasing the distant views of her parents' home, then that of her nearest neighbor, until all you could see was the rooftop, then the chimney, then nothing at all."

The strong women of PEI made me stop and ask myself why I was wallowing in self-pity just because I was alone. With a good income, no family responsibilities and a pleasant life, what did I have to complain about? I made up my mind to focus less on myself, and more on the land and the people I was beginning to discover.

In Souris, PEI, I caught a ferry for the Magdalen Islands, a group of 13 tiny islands in the Gulf of St. Lawrence. 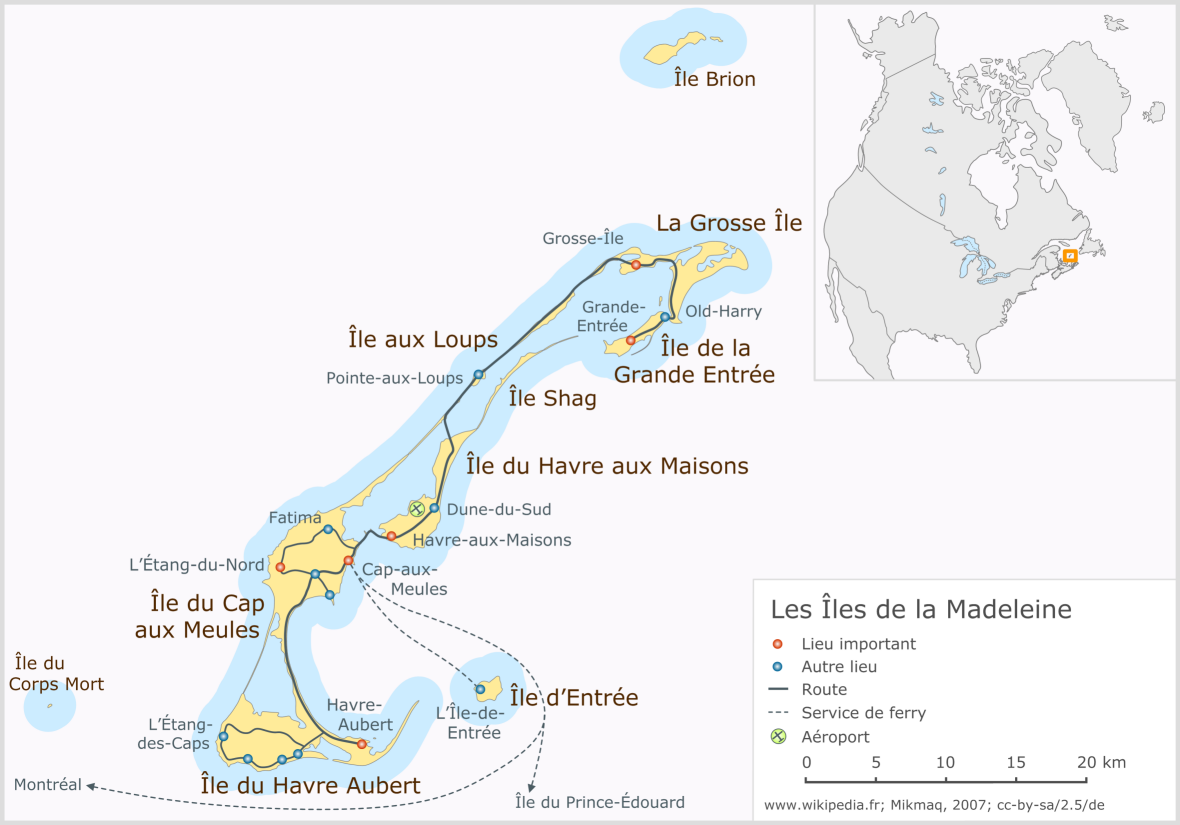 I was unimpressed by the tourist town of Havre-aux-Maisons, which I described as "Cape Cod dubbed in French." But the countryside was dazzling:

"I explored the bumpy eastern shore of Havre-aux-Maisons this morning. Up! Down! Around! The island is sculptured. The road curls around dunes covered in goowiddy and razor-edged grass. Distant views of Île d'Entrée, a red-and-white lighthouse, red cliffs and the endless beach at Dune-du-Sud. And then I was on the dune itself, a narrow ribbon of sand 15 km long. The wind was ferocious, but it was a beautiful sunny day, so I opened my windbreaker, sat up straight on the bicycle and let the wind blow me across the dune. I was rolling along at 20 km an hour without touching my pedals."

My destination was a "base de pleine aire" — essentially summer camp for adults — on Île de la Grande Entrée. I spent five delicious days there, going to the beach every day, taking mud baths that turned my skin a lovely reddish-brown, hiking and eating wild strawberries on my hands and knees. One day we all donned wetsuits and life jackets and let the waves wash us in and out of the "grottos" in the highly sculptured red sandstone cliffs.

The return trip to Havre-aux-Maisons was a 50 km sprint in very high winds. By the time I reached Pointe-aux-Loups, I was already exhausted. My lips were cracked and dry and crows' feet were branded onto my face. I stopped at a casse-croûte, had a sandwich and a pint of beer, and fell asleep in a field. But when I awoke, the wind was blowing even harder.

Even walking was difficult. When I turned my head to one side, it took a conscious effort to turn it back again. The power lines — the old-fashioned kind on wooden poles with all kinds of ceramic doodads — were tearing at their moorings. And then there were the low-flying "sheep". The wind had whipped up so many "moutons" ("sheep" or "whitecaps") that I had to pay attention not to get socked in the eye by the great gobs of sea suds that were flying overhead along with any other loose objects the wind found lying on the western shore. It took me 2½ hours to cover the final 15 km to Havre-aux-Maisons.

Got up early — 6:00 am — this morning to go to Île d'Entrée. It's a good thing I did, because already by 7:30 they were turning people away. And there I was with my bulky bike, looking in vain for "the ferry". It was nothing but a big old wooden fishing boat with a few extra seats, capacity:17 people. On the boat I met Ernie and Mabel Walsh and their daughter Charlene. Charlene, age 14, offered to show me around the island, and I ended up spending the day with her and her friends, and learning about life on this tiny Anglophone island in a Francophone sea. Following well-worn shortcuts through her neighbors' yards, Charlene identified every person and animal we met, and explained how they were related. I noticed that she called everyone by first name only, and treated everyone — children, adults and pets — as if they occupied a position of equal importance in the community. When I mentioned that I wanted to buy some film, Charlene nonchalantly grabbed the key from the owner's house, unlocked the store, turned on the lights and handed me my film, the store's owner appearing long enough to open and close the cash register. Charlene told me many tales, about a crazy woman on a three-wheeled motorcycle who tried to shoot her husband, and a couple whose third baby turned out to be triplets.

Soon we were heading across a potato patch toward a fence that completely encircled the island. "We're not allowed to crawl over the fence," said Charlene, "only the gate. The mayor says so." Charlene led me up a dirt track through the cleavage that separates the island's two breast-shaped mountains, both utterly devoid of trees or shrubs —not even the ever-present goowiddy. Nothing but low grasses and wild strawberries. At the top of the rise, an unbelievable landscape unrolled in front of us. "Big Hill" drops off at dizzying angles a thousand feet to the sea on three sides, and shelters a high valley threaded by small streams that feed two or three small ponds choked with wild irises. Such dramatic relief for such a tiny island!

A handful of dairy cows had worn braided paths into the hillside. They were only milked during the winter, when there was no milk from the mainland. Every spring the children of Île d'Entrée chased them into the hills. They'd return in the fall to spend the winter in four communally-owned barns (three families per barn). Farmers were haying their handkerchief-sized fields as we climbed the mountain, raking the hay into piles that would be stored loose in the barns, except for one fellow who recently bought a baler and now stores his hay in rectangular bales. "He's weird," Charlene declared.

As we walked, she recited the names of the 13 families that inhabited the island — two French, the others English, Irish or Scottish. Charlene and her friends were all fair-haired and freckle-faced, including the famous triplets, who introduced themselves as "Charlene's best friend" (singular, with a giggle).

By the end of the day, half a dozen youngsters and several dogs had joined the group, and they all walked me down to the quai to catch the boat back to Havre-aux-Maisons. Later that night, I'd pass by the island on the ferry to Souris. The children begged me to stand on the deck and wave my red windbreaker, and ask the ferry captain to blow the whistle.

Most of the villagers gather on the quai when the local boat comes and goes. Some were tinkering with one of the island's antique cars, some were tending store, and some were just hanging out. I realized with a start that the islanders were very poor, and that there were no real jobs of any kind — just six weeks of lobster fishing and another four of odd jobs to make the minimum of 10 weeks needed to qualify for unemployment.

Charlene had completed the eighth grade education that the island offered. Next year she'd be sent, at great expense, to boarding school, in French, in Cap-aux-Meules or Gaspésie. She hoped to return to the island as a teacher, but how would her family manage?

As requested, I passed along Charlene's request to the steward on the ferry from Havre-aux-Maisons to Souris. As we neared Île d'Entrée, I noticed the zig-zag pattern of our wake. The captain had altered our course to pass as close as possible to the island! I strained my eyes against the golden light of the setting sun. Was she there? Then I caught sight of a tiny form, jumping up and down at the very end of the point, frantically waving a red jacket. I unfurled my own windbreaker and began waving it with equal vigor. Just then the ferry's deep voice boomed its greeting, not once, but many times. The little girl alone at the tip of the island, the enormous ferry that was her link to the outside world, and the sun setting on a handful of houses tacked to the side of this improbably beautiful mountain in the middle of the ocean.