In searching for places unvisited and untrammeled in the wilderness Nick and I decided implement one of my suggestions and explore the lower reaches of That Creek in Northern Arizona to the confluence with the Verde River. Vot a trip!!! This slight bit of canyoneering involved the usual hiking, up-to-waist-deep wading in the creek, extended rock-hopping, more-than-sufficent bushwhacking, and scrambling over larger rocks, but we avoided the usual obligatory swims by semi-judiciously selecting land routes around them. Estimated distances and on-trail times made the determination of a whopping 1 mph for both out and back a simple calculation. This is Nick demonstrating fine wading and hiking pole technique in an upper portion of the creek. Note the cloudiness of the water in this stretch. The poles REALLY help maintain one's balance while wading and dry-ground rock-ballet exercises as well as probing for rocks and holes during crossings. He specifically requested this photo so his Mom would be sure to get a picture of him. This interesting formation stream right is just opposite the layer-cake appearing, interleaved basalt-ash mountain on stream left that is shown below. It struck me that this was not identical to its immediate companion across the way - something that needs checking out. What a great place! 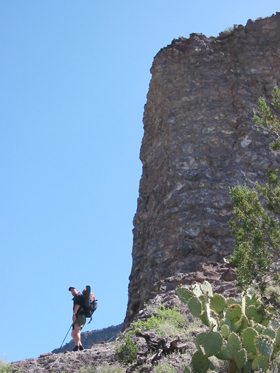 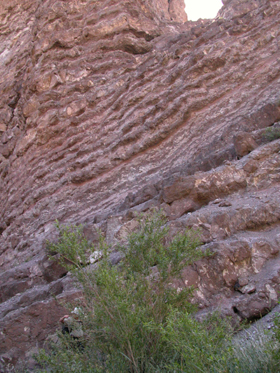 And here is the layer cake. Nick is standing on the nose of a ridge that extended from part way up the "point" of this feature at a sharp bend in the river. These sequentially deposited basalt-ash layers towered for perhaps 35 m above the stream. Certainly one of the most interesting geological features we saw on the trek, one of my friends commented how her son would like to terrorize his mother by attempting to scale the bluff. 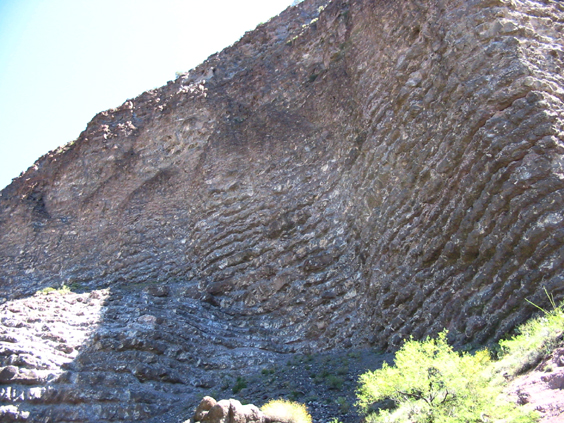 Here the multiple flow and falls show some irregularities and unconformities in the patterns indicating interruptions and perhaps intervening erosion of the deposits. 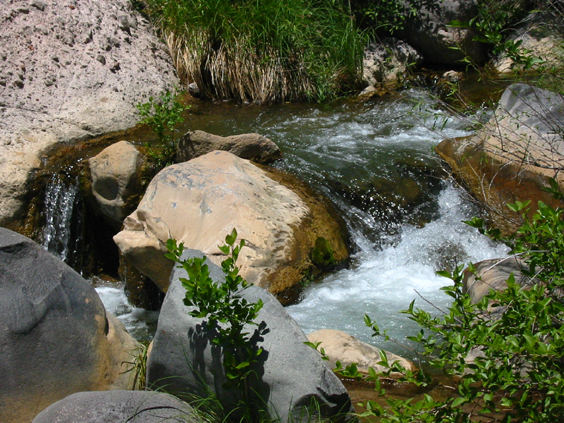 The upper portion of the stream was somewhat turbid, but clarity increased as we worked our way toward the Verde River. Multitudinous cascades and small falls such as this are along the way, with the burbling, gurgling stream encouraging us on, despite being continously whacked-back by the brush. The fall of the river is only about 200 m along the 12+ km run of the creek and we did not encounter any large obstacles along the way. By next time, however, a house-sized boulder may dam up a portion of the stream making the adventure more challenging. Further downstream we saw another great formation - this time with eroded towers displaying the bedding of the tilted layers. 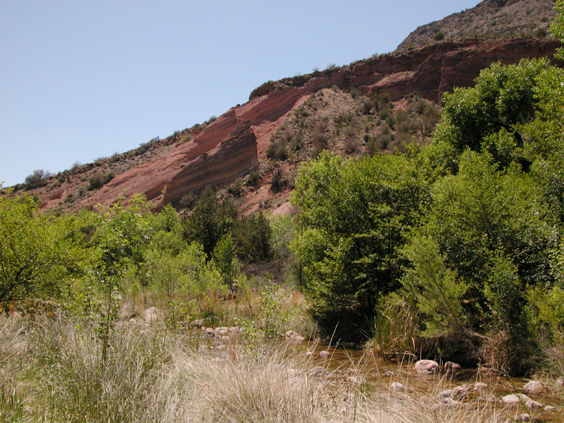 Here is the same formation looking downstream. The reddish beds are more distinct here, but the topography is not as obvious. We knew we were getting close when we could see the confluence from atop a bluff. That Creek in Northern Arizona comes in from the lower left here, merging with the Verde River behind the screen of trees.

About 9 hours after starting out we reached the confluence. We were both VERY glad to arrive and decided we really did not need to explore any further for the day. This view is looking upstream in the Verde with the clear feed of That Creek in Northern Arizona seen in the lower portion of the picture. We were not quite sure where the transition of creek water from turbid to clear occurred, but is sure is evident in the photos. Were we glad to get to the juncture??? This photo shouts "You betcha!" We enjoyed putting down packs, a snack, plenty of water and an extended cooling off period. Then went for a swim. The Verde was distinctly warmer than That Creek in Northern Arizona! At the stream left juncture of was this well-grouted and eroded breccia, appearing for all intents like a paved section of the landscape. While it looks like a poor job for a patio, what an excellent find out in nature. Nick slept "on the rocks" Saturday night while I opted to snooze on a slightly more forgiving gravel bar. Here is the mixing zone - where confluence actually is happening right in front of your eyes. This perspective reveals the upstream area. The peak is the end of Ikes Backbone and sits high above the Verde River. Here is the view downstream - very enjoyable and quiet spot - at least when the rivers and creeks are well behaved.

And as to solitude, after leaving a barking dog at the last campsite along accessible by the road at the departure point, we saw no one else and heard only aircraft. There certainly were features of civilzation about, e.g. quite a bit of trash washed from upstream, but generally the only vestiges of previous vistations were occasional fire rings; intermittent portions of usually barely worn, but cairned treadways; infrequent sections of fence or washed in barbed wire; one abandoned feed trough; an old riveted tank that was apparently used to water horses; and a foundation we happened on up on a bluff near the confluence. Not much evidence for recent visitors with the exception of a substantial amount of black plastic mesh and PVC pipe that Nick and I hypothesize may be belong to someone studying native fish in That Creek in Northern Arizona. There's good reason for it's relative isolation and we have the scars to prove it. 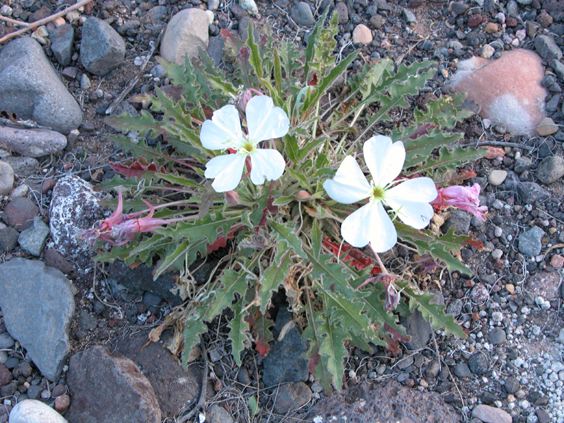 There were a few flowers along the way, but this white primrose will be sufficient to close the page on another worthwhile exploration.