It's tricky planning outdoor activities this time of year. A typical monsoon forecast is "30 per cent chance of afternoon showers", which means "we have no clue." It could be a real gully washer or nothing but a blast of wet dust. When we planned a four-day hiking/camping trip in southeast Arizona and southwestern New Mexico, we knew we had to be ready to improvise.

The first stop was Chiricahua Crest trail. It used to be our favorite summer backpacking destination, but we haven't had the heart to return since the ridge burned up in the Horseshoe Fire of 2011.

We headed up Pinery Canyon Road on a Friday afternoon. Inky clouds hovering above the Chiricahuas combined with a rosy sunset to bathe the canyon in gold and purple light. We had to stop every few feet to take pictures!

It was mercifully dark when we arrived at Rustler Park, so we didn't have to avert our eyes from the blackened ruins of this former high elevation haven.

The next morning Jim and Jacki F from Willcox and Ann H and Miguel S from Silver City joined us for our first venture onto Chiricahua Crest in five years. We were pleasantly surprised. The Crest is virtually shorn of trees, but in the height of the monsoon, young aspens, waist-high ferns and summer wildflowers blanket the slopes. Unobstructed views in all directions reveal the dizzying contours of the Turkey Creek Caldera towering nearly 5000 feet above the Sulphur Springs Valley.

We ate lunch at Round Park, unchanged since our last visit except that the trail was in much better shape. With some trepidation, we made a side trip to Cima Cabin, scene of a very scary encounter with a bear in 2007. We were surprised to find the cabin unlocked and neat as a pin. Gone were the shelves full of rotting food and the layers of rat poop and moth wings. New windows replaced the ones shredded by the bears, but deep claw marks were still visible at the rear of the cabin. Just uphill, we came across a cluster of giant Alice-in-Wonderland mushrooms.

There was a lot of lightning, heavy rain and even some hail on our return hike, but we all made it safely back to the vehicles. Ann, Miguel, Dennis and I headed downhill for dinner in Portal and a peaceful night at Sandy Flat Campground.

The next day we wandered into the Mogollon Mountains via Silver City, reaching Mogollon in time for lunch at the recently reopened Purple Onion Cafe. Although Bursum Road is passable, damage from the flood of September, 2013, is still very much in evidence. Washouts nibble at the undersides while rock slides attack from above. You have to wonder how long this road can be tacked in place when Mother Nature seems so determined to take it out.

With dark clouds piling up in the east, we reconsidered our plans to continue up Bursum Road. We heard from locals that the road was passable with a high clearance vehicle for at least 20 miles, but we also heard that the first seven miles are very subject to washouts.

We ended up camping off Sacaton Road, one of the many side roads into the Mogollons, this one offering access to the Little Dry Creek Trailhead. 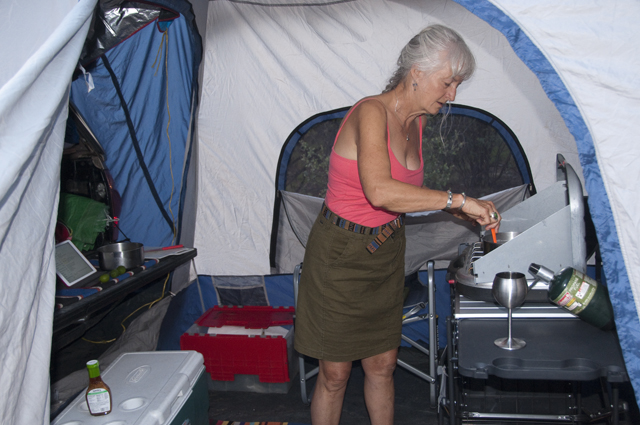 Cooking dinner in the rain by the light of the iPad

For the final day of our monsoon meander, we scouted a trail that has been on our radar for several years. Our last attempt was, fortunately, derailed by the flood of September, 2013. It was worth the wait!

It was such a great trip, we decided to stretch it one more night, and returned to one of our favorite camping areas on the Gila River near Safford. It was 103 degrees at sunset. Only true Arizonans camp in triple-digit heat! We set up the truck tent away from the TacoMa, pulled the mattress out of the truck and laid it on the floor with all the doors unzipped. We stayed up late, knowing the dry desert air would eventually cool off, and took a quick dip in the muddy Gila to cool off before turning in. We were rewarded with an all-night view of a nearly full moon that cast a soft glow on the cliffs below us, silent strobing from a distant lightning storm and a handful of shooting stars.