I lived in Arizona for several years before backpacking the Chiricahua Crest Trail, having read reports of poor trail conditions resulting from a catastrophic fire in 1994. My birthday in 2005 was the first of many expeditions, and our trip report recounts great views interspersed with "naked ridges littered with the bleached bones of burnt timber". We could not have imagined that a few years later, in 2011, the Horseshoe II Fire would tear through the Chiricahuas, burning more than 220,000 acres and turning the remaining forest into charred matchsticks.

Since then, we've stayed away from the Crest Trail except for an occasional day hike. But now nine years have passed, and we decided it was time to return to the Chiricahua Crest to scout the area for a possible future backpacking trip. 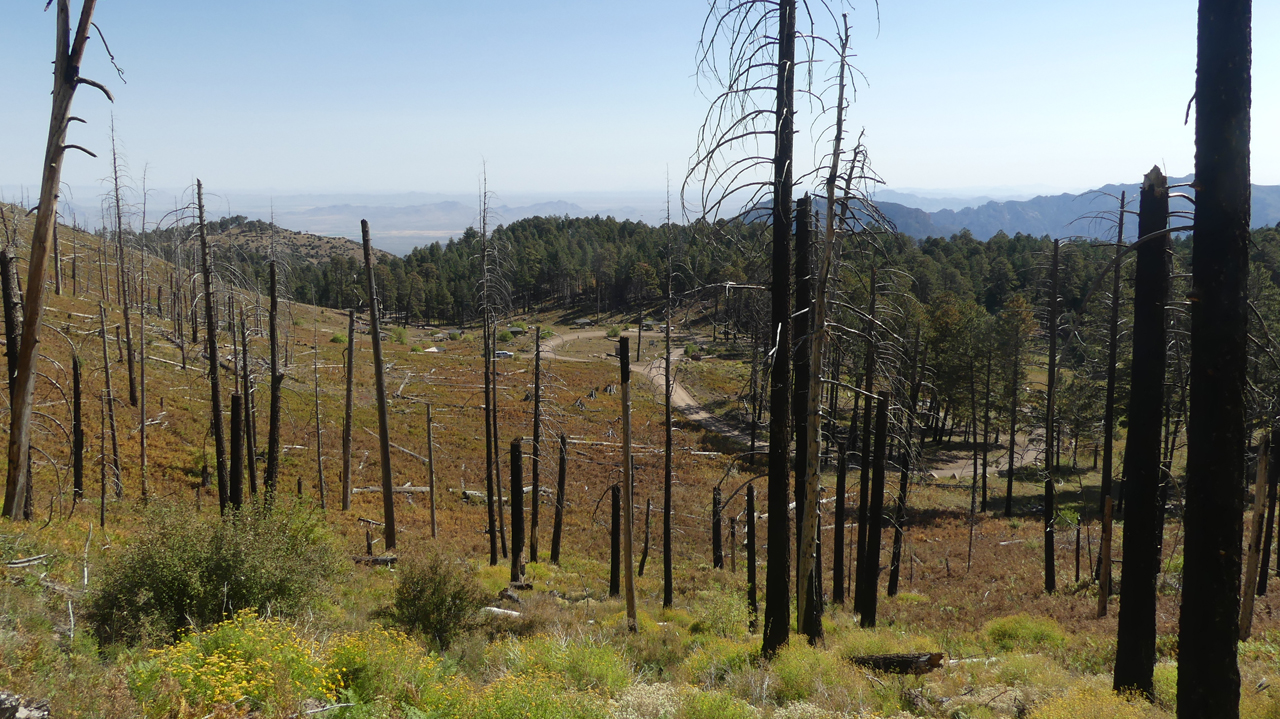 Rustler Park at 8500 feet is the most popular trailhead. For years, this was our preferred location for Ham Radio Field Day, where each year we would usher in the monsoon with a series of violent thunderstorms. Today, there's not a tree left standing in Rustler Park, and the shaded campsites have been replaced with a series of overbuilt picnic shelters. 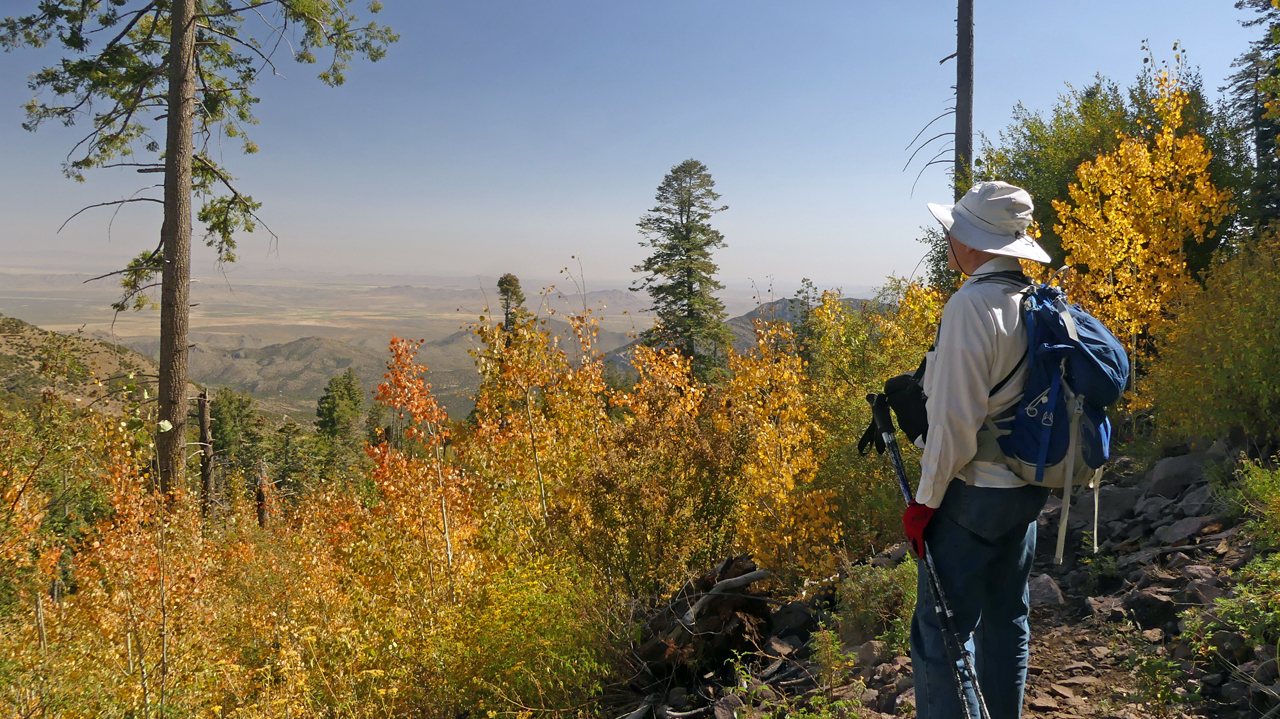 The first mile is a grueling slog through slash and low brush, but at the top of the ridge, the tree cover resumes, and parts of the trail feel almost like old times. 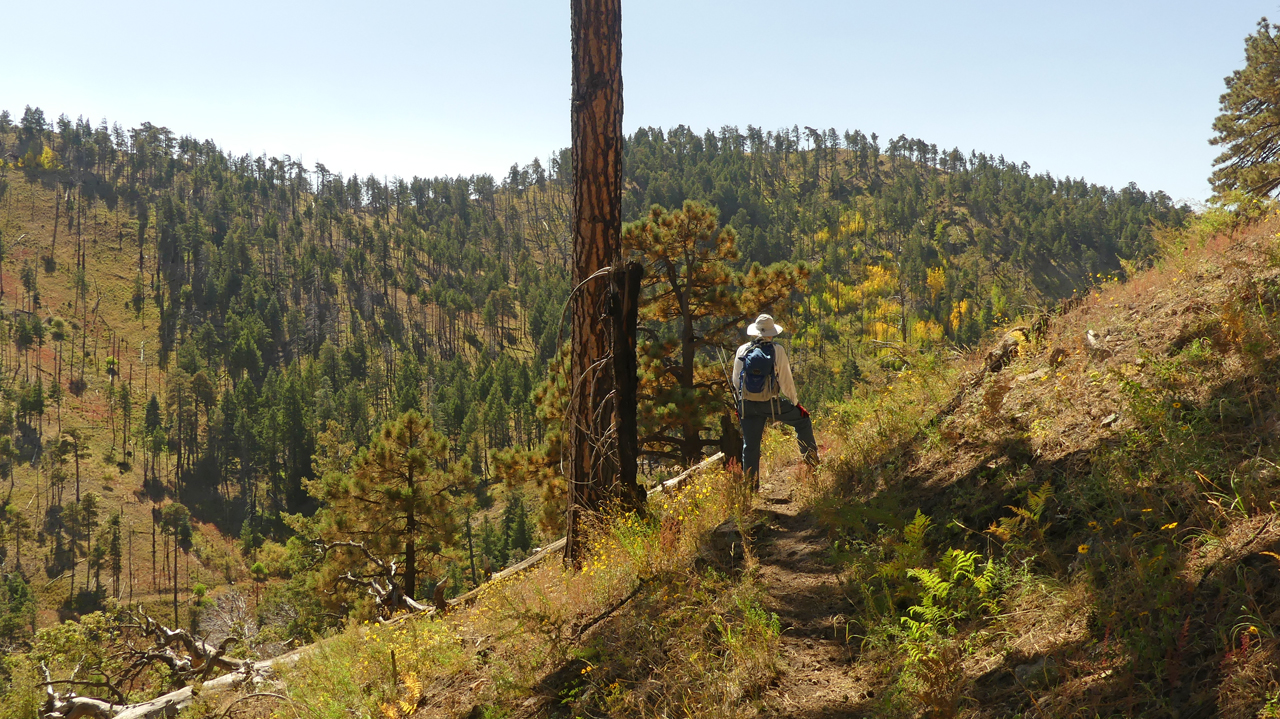 In the intervening years, young and vigorous aspens trees have populated the barren slopes, cloaking them in vibrant color. 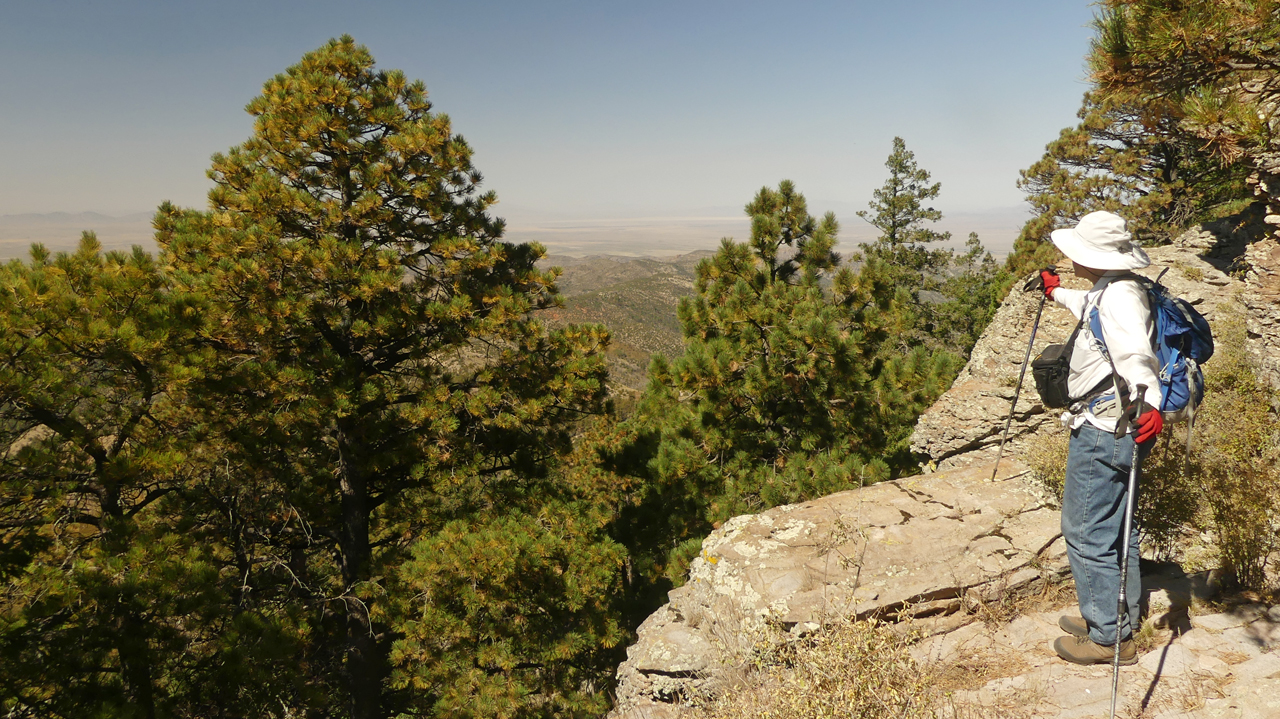 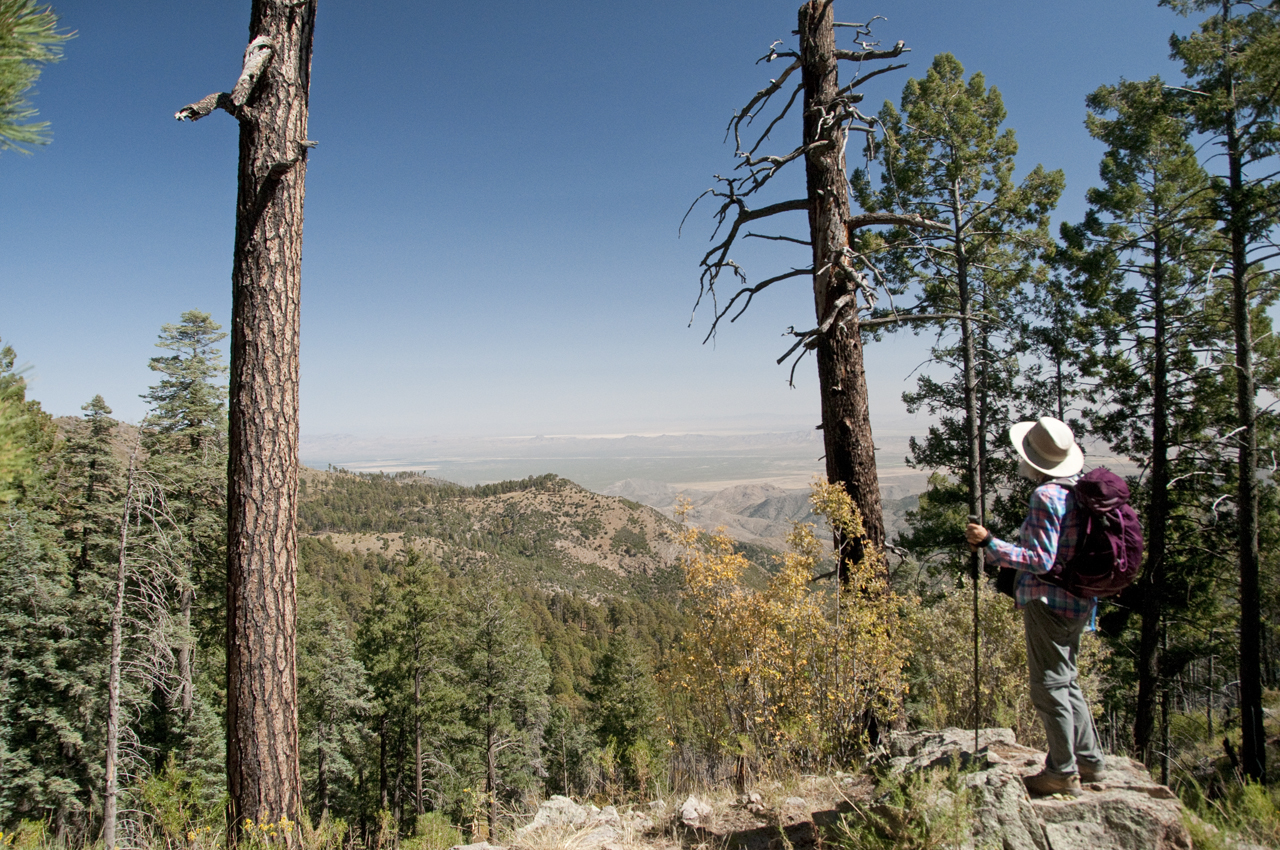 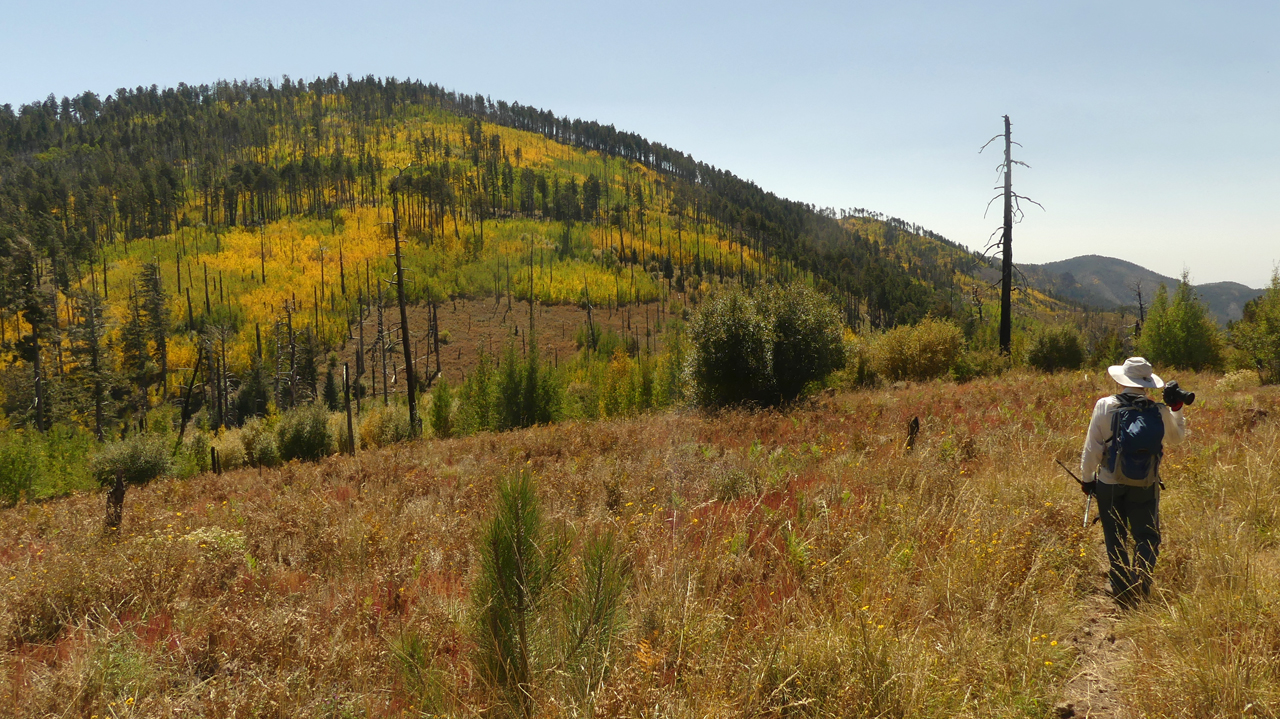 As we approached Flys Peak, the stands of aspen became even thicker and more colorful. 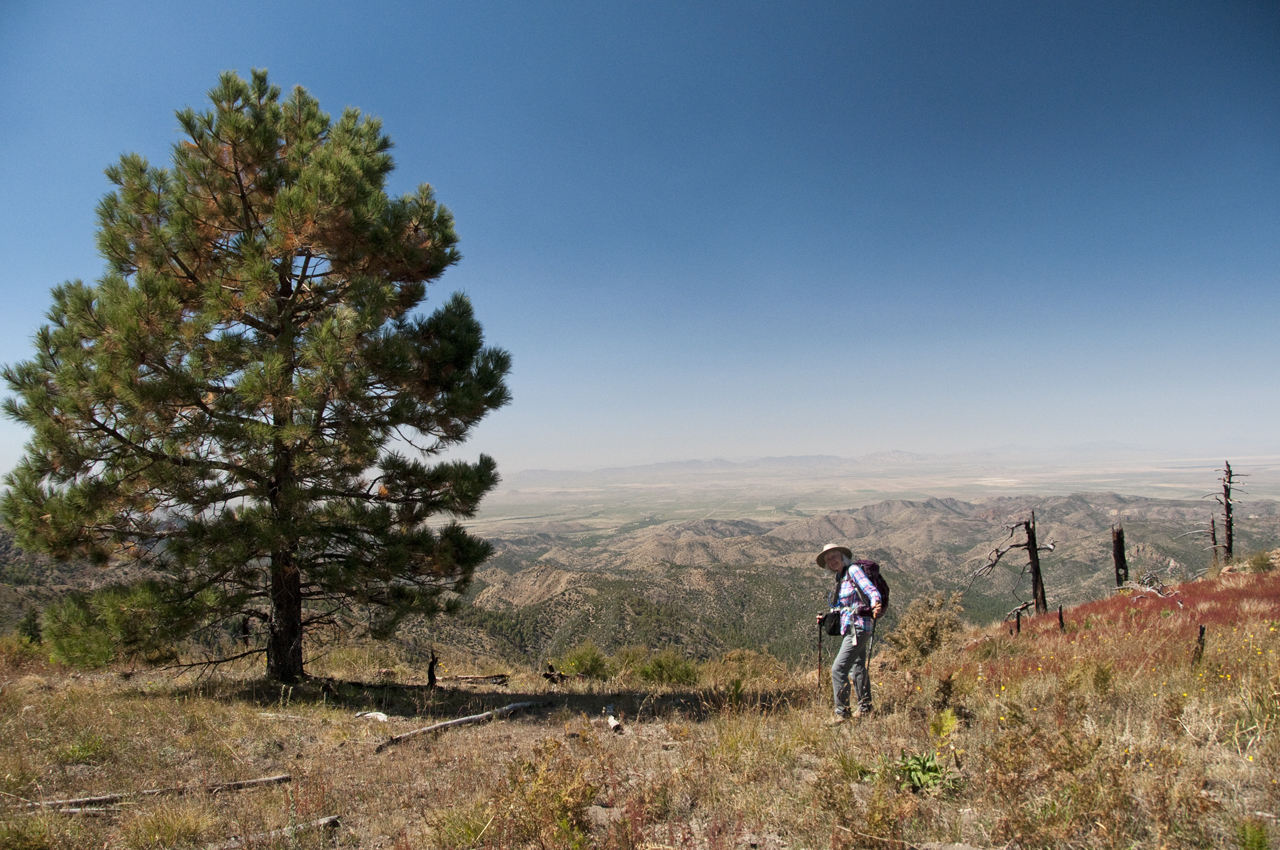 The upside of the recurrent fires is unobstructed views of the steep sides of the Turkey Creek caldera, and the soft glow of the distant playa. 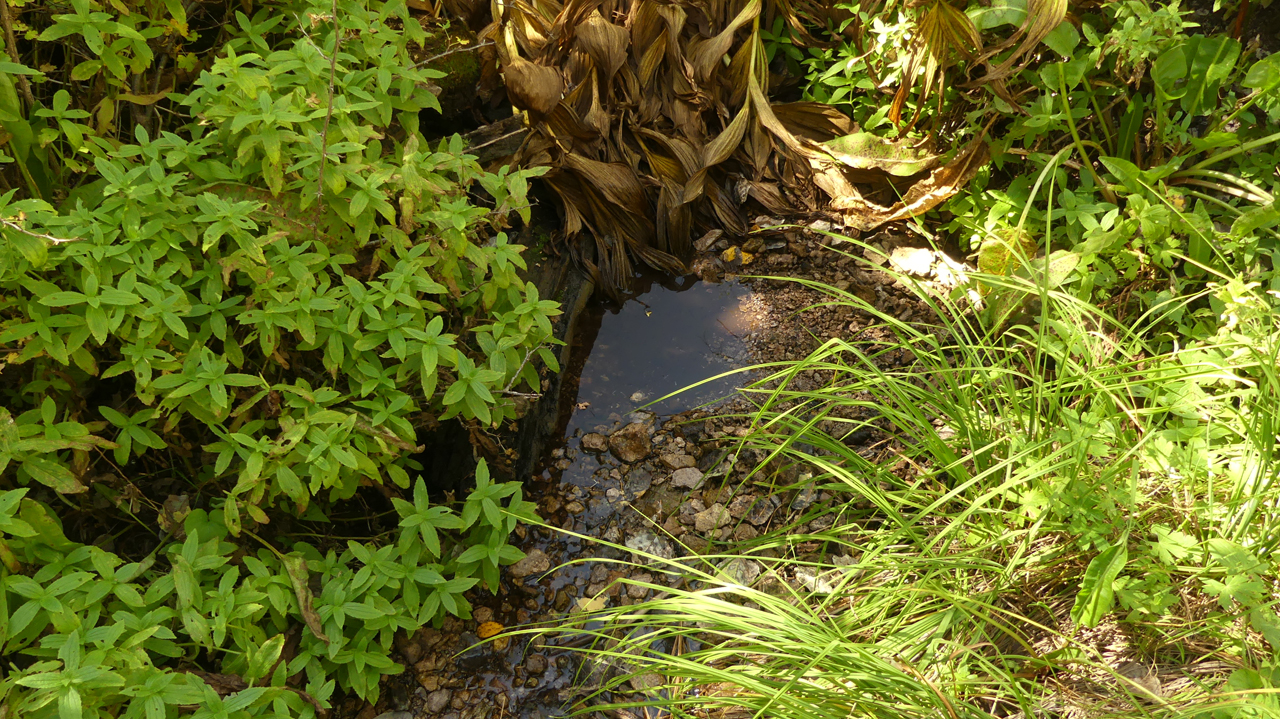 We took a side trip to check out Tub Spring. Just a trickle of water. 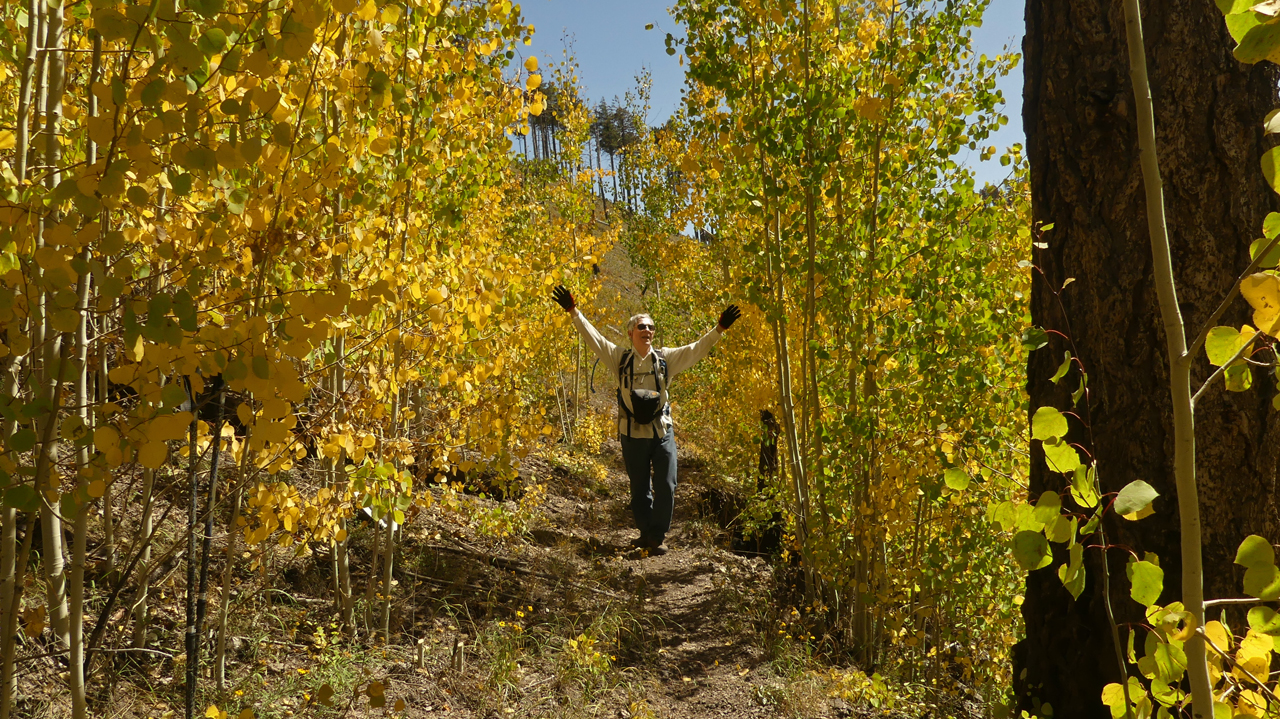 Gaspin' in the aspen!

We had only planned on a five-mile loop to Flys Peak and back, but we were feeling good, so we pushed on to Round Park. The long and steady uphill toward Round Park offers some of the Crest's most dramatic scenery. 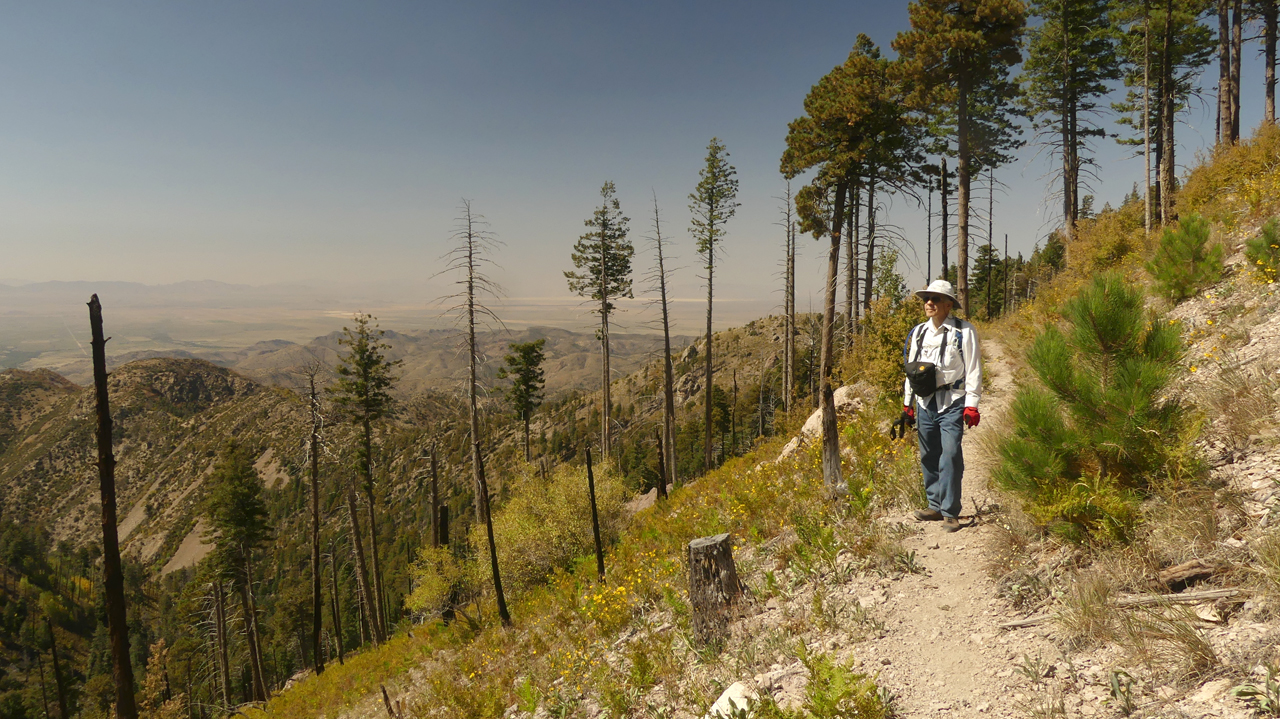 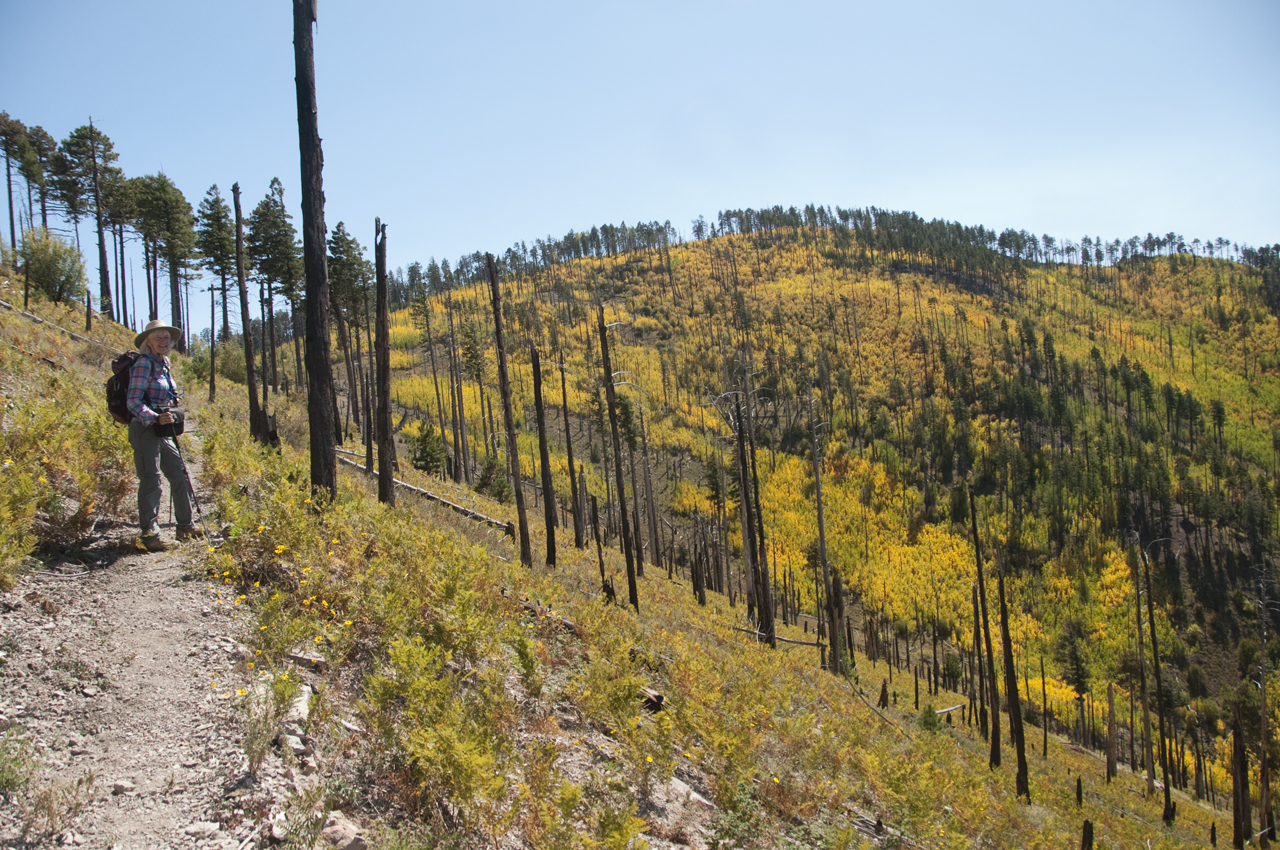 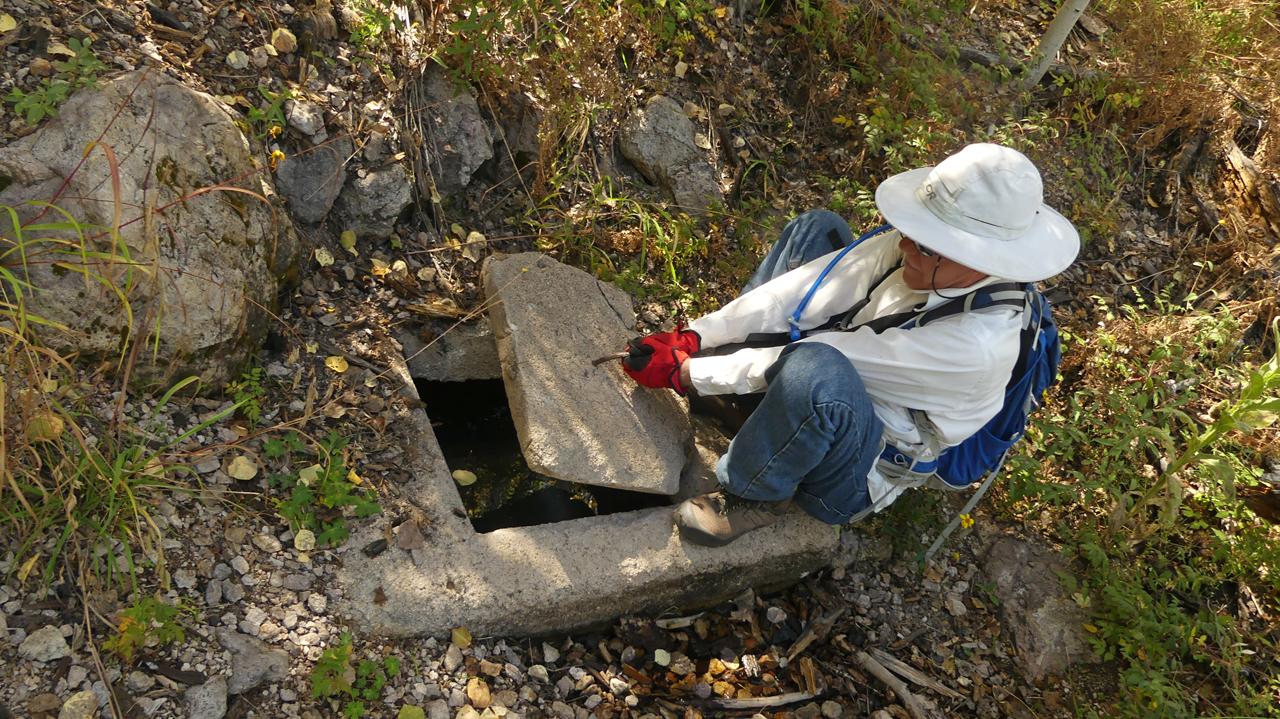 We finally found Booger Spring, well past the mapped location. It was flowing well, and protected by an extremely heavy cement cover.

We took a nice long break at Round Park, at 9200', with jaw-dropping views in all directions. Then we retraced our steps as far as Flys Peak and returned to camp via the Long Park Road. About 8+ miles in all. 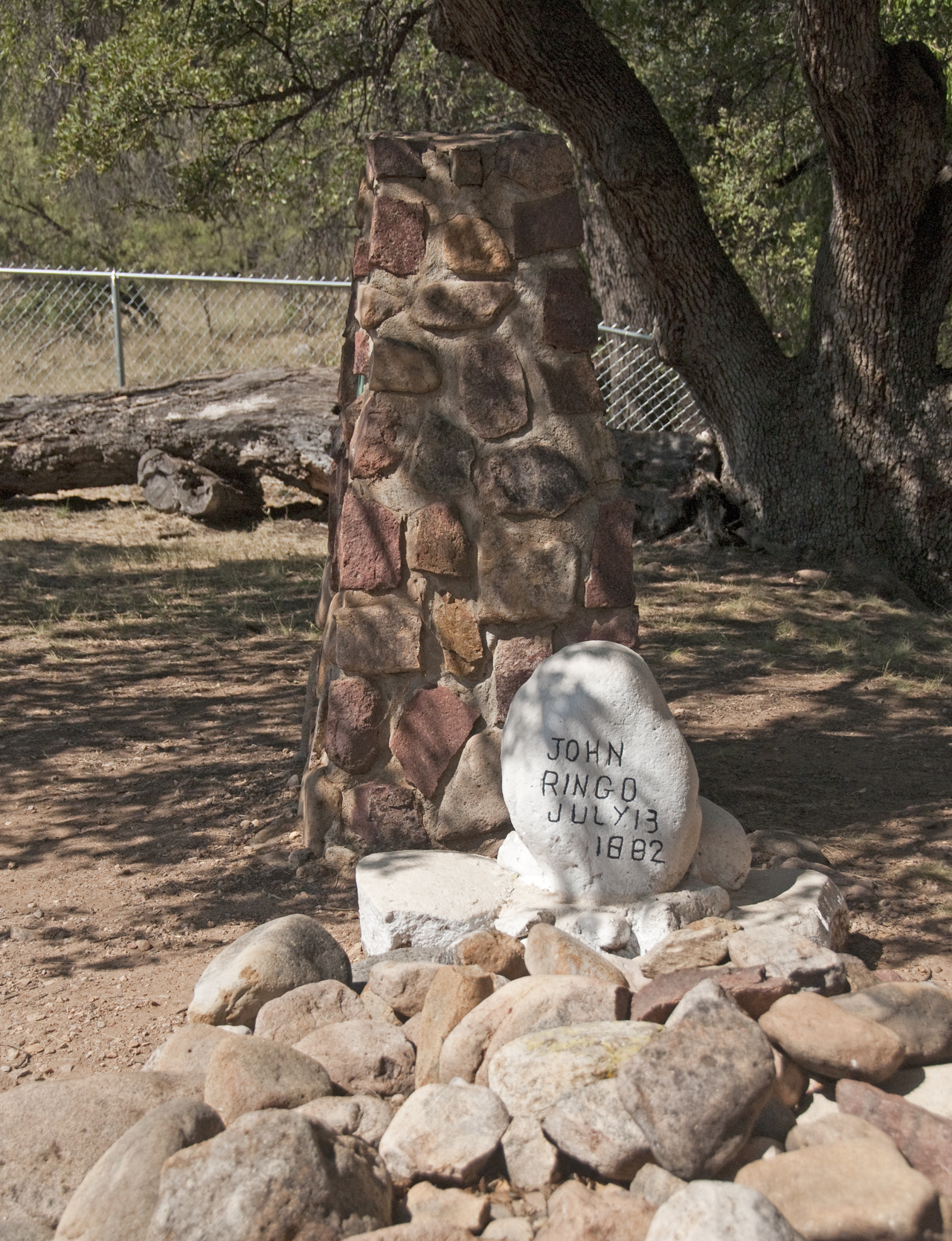 While we were in the area, we decided to explore Turkey Creek Road, which provides access to additional hiking trails from the west side of the Chiricahuas. On the way back we stopped near the Sanders Ranch to view the grave of Johnny Ringo. It lies on private land, but a fenced-in area allows visitors access to the grave. The story of Johnny Ringo paints a man of quick temper and vindictive tendencies who had numerous run-ins with the law. There was a lot of bad blood between him and the Earp family. The story of his death has numerous claimants to his demise, but the official coroner's story seems the most plausible — he committed suicide. His body was found at the base of a large oak. The photo of the grave, above, includes a large oak tree in the background. Judging from its size, it is easily over 200 years in age, making it at least 70 when Johnny Ringo sat against it and squeezed the trigger. 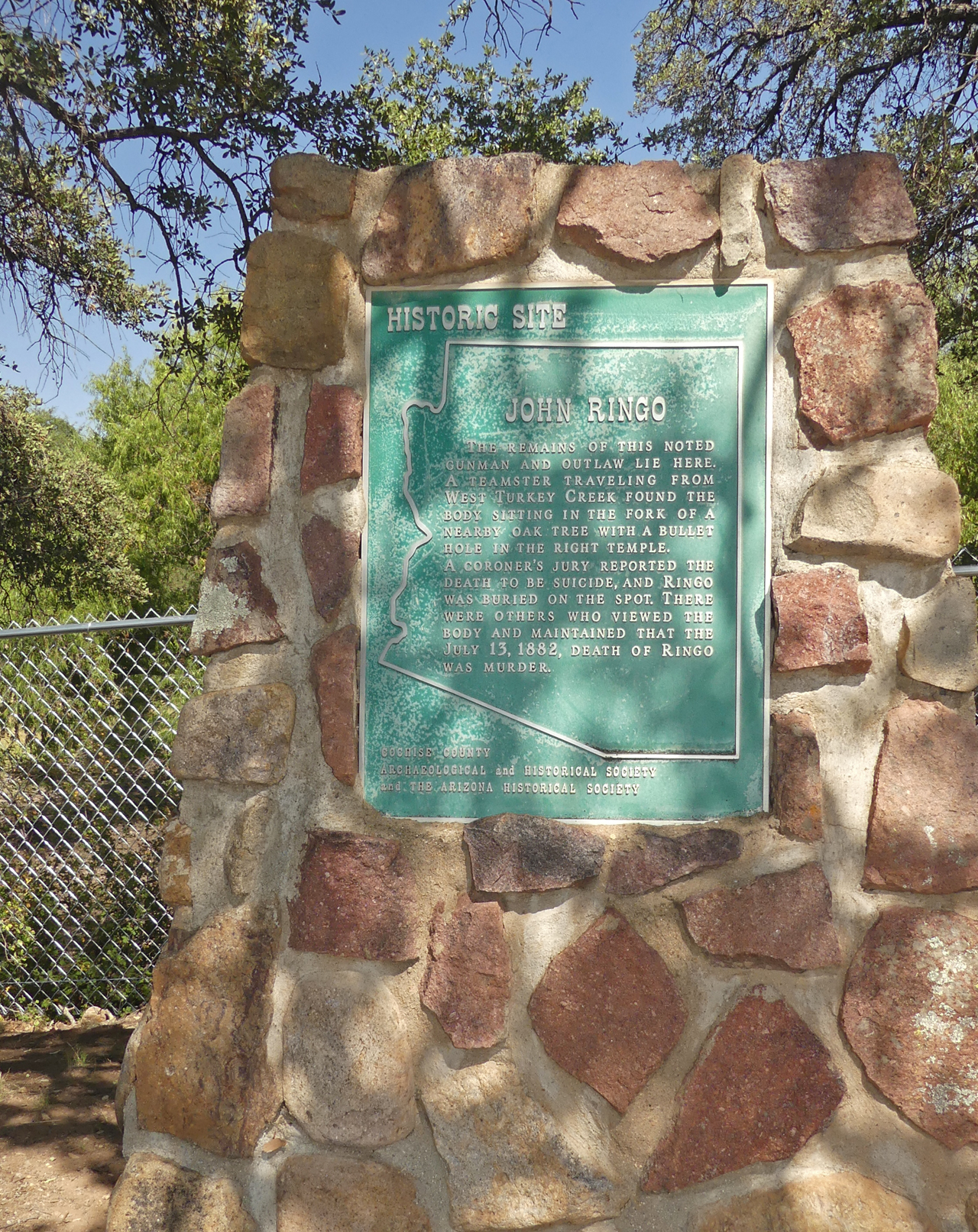 Arizona history, often embellished by numerous chroniclers, remains fascinating. And when you can visit a remote grave of a settler or notorious villain and ponder the time and circumstances of the Old West, you leave all the richer for the experience.