Early one sunny Saturday morning, I awoke to the sound of falling rain ... inside the house. I threw open the door to my office to find my furniture steeping in a half-inch of slop, and water pouring out of the ceiling fan.

Turning off the main valve had no effect, so we emptied the linen closet, removed all the shelves, replaced them with a step ladder and headed for the attic. It was the second in a series of unpleasant surprises. When the roof was last replaced, the discarded materials were simply dumped on top of the old insulation. The attic was a sea of slivers and filthy fiberglas. We eventually located the broken pipe, attacked it with a hacksaw, and capped it off. We would spend the next two days crawling on our bellies, gathering shards of wood and wads of soaking wet insulation and hauling them out a bag at a time through the linen closet. The best part was being caked with mud and fiberglas, but not having any water for a shower.

By the time we had cleared enough debris to locate both ends of the pipe, we knew we were looking at a total replacement. A bit of research sold us on replacing the old galvanized pipe with ¾" PEX (polyethylene x-connected) tubing. Working in severely restricted space, our biggest concern was its inherent kinkiness. We unrolled all 100 feet to encourage it to relax a little before our next adventure. 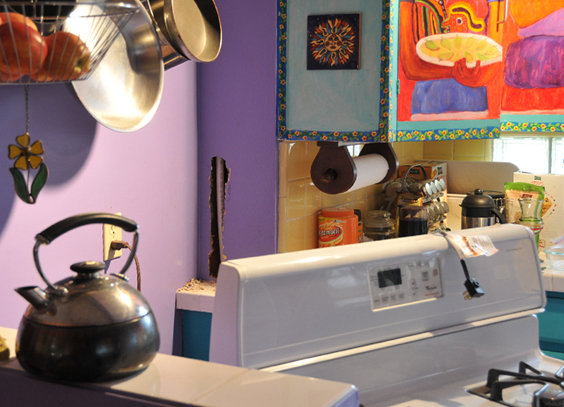 One of the immutable laws of plumbing is that all repairs eventually end up destroying the kitchen. Here's the hole in our kitchen wall, where we had to remove a dead junction box in order to pass the pipe through to the kitchen sink.

After four more days of slithering around like giant salamanders, we eventually replaced 70 feet of pipe, and are once again enjoying the miracle of house-wide hot and cold running water. 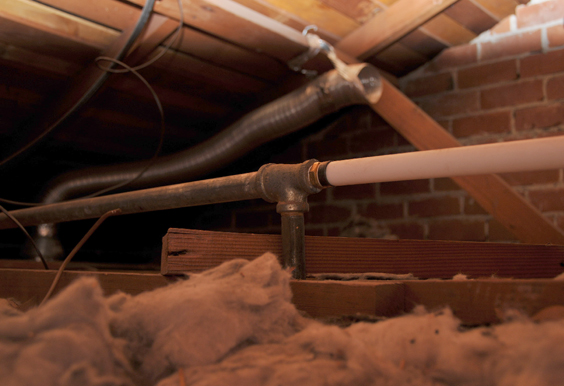 On the plus side, as a result of this project, we acquired some cool new tools — a pex crimping tool and a reciprocating saw. Between the rafters we also found pieces of a Tucson Citizen dated February 7, 1942 — conclusive evidence that the house was probably built in 1941-1942.

Stay tuned for the next installment: reinsulating a 70-year-old house!