Goldilocks and the Three Bares

We had such a good time on last year's early summer hike to Aravaipa Canyon that we decided to make it an annual tradition. This year we were lucky enough to get permits for a weekend when Kathy was in town! 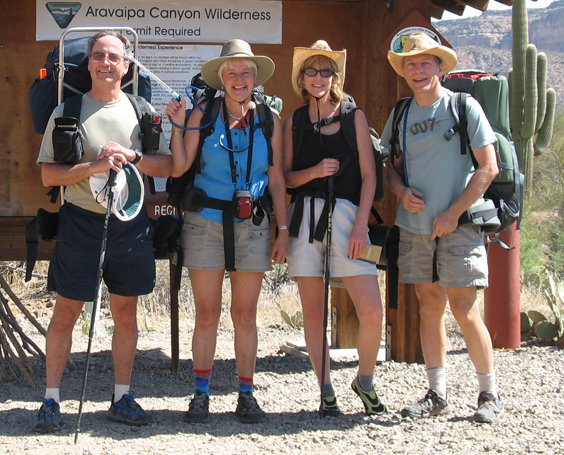 We met David at the trailhead about 9:00 a.m. Since it was Kathy's first backpacking trip in over 20 years, so we did our best to equip her with super lightweight gear. It still took three people to saddle 'er up! I wonder what she's got in there? 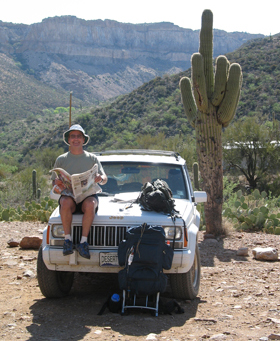 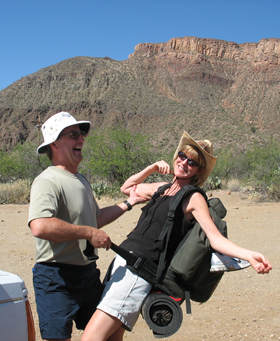 I've been telling Kathy about Aravaipa Canyon for as long as I've known her. Finally, the time was right, and we were sloshing along in ankle-deep water under a cloudless sky. 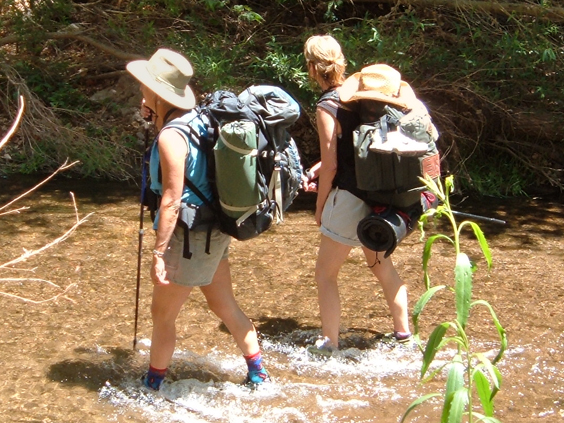 This was my fifth trip into Aravaipa Canyon, and each one teaches me something new. This time I noticed that as we make our way upstream, it's not the cliffs that rise up, but the river that cuts more deeply, revealing layer after layer of the canyon's geology. 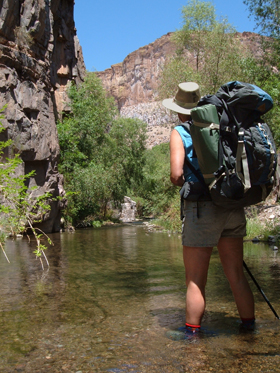 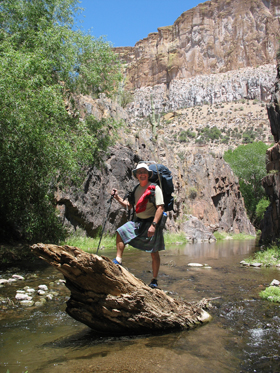 On our last trip, I noticed that there's almost always a faint trail running along the shelf well above the stream. But it's much more fun to walk in the water! 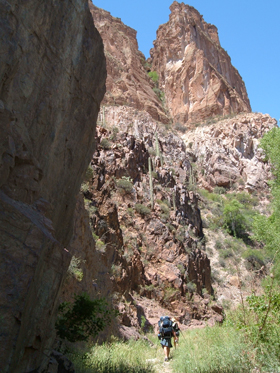 Heavy flooding two years ago flattened the stream and filled in the deepest pools. There's a photo of us wading in chest-deep water, packs over our heads, where today there's only a foot or so of water. But nature is on the move again, and many pools are reappearing, albeit in different locations. 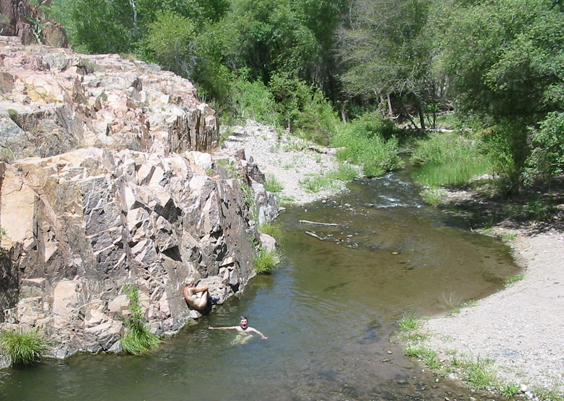 The first good swimming hole is at a sharp bend about two miles into the canyon. We nearly always stop for lunch at this spot. The water was 64 degrees -- warm enough for more than a quick splash! 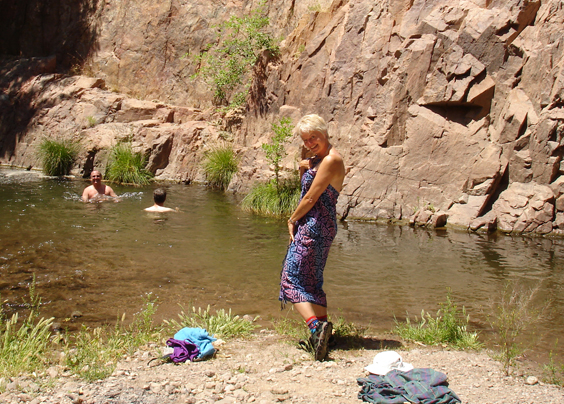 Streamside style: it's all in the accessor-ease! 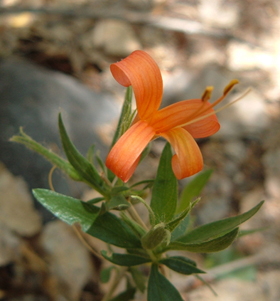 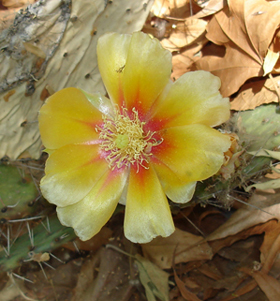 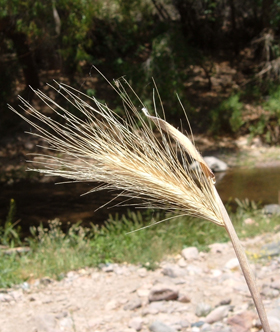 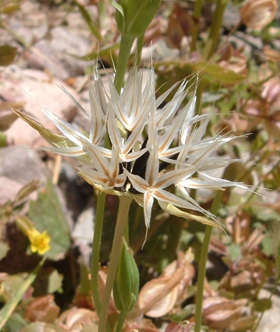 No matter when we visit, Aravaipa Canyon always seems to be in bloom. Here we have a desert honeysuckle and an Engelman prickly pear blossom ... 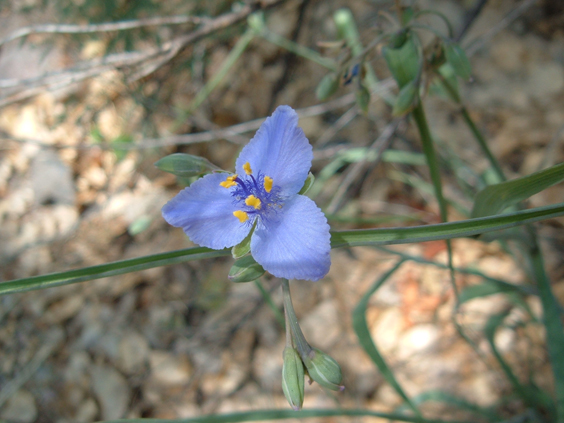 Larry, our consulting botanist/entymologist identified the blue flower as a spiderwort. 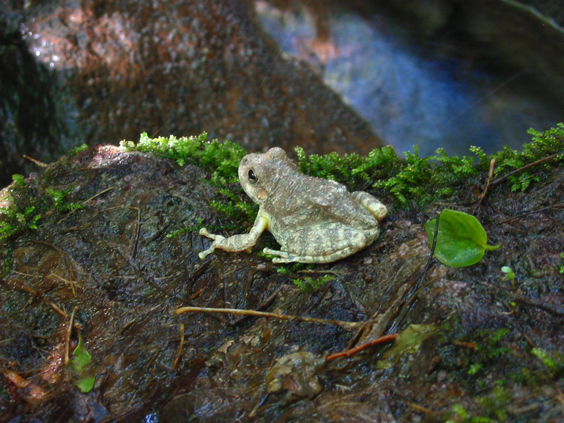 The fauna was equally impressive. The trees vibrated with dippers, goldfinches, cardinals and flycatchers. We saw a pair of coatimundis -- twice! -- during an evening walk. More curious than frightened, they stopped to peer at us several times while silently scampering up a sheer rock wall. 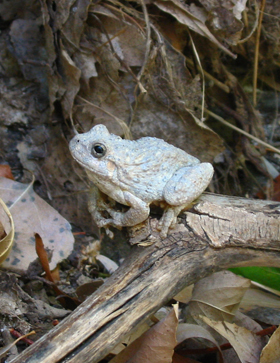 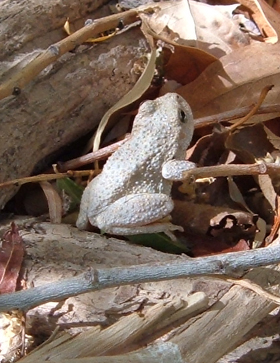 And then there were the toads and the frogs ... 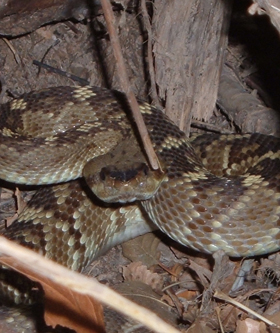 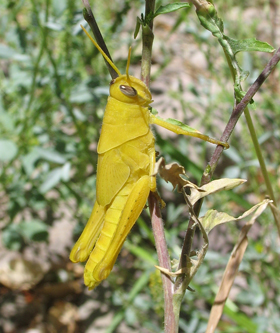 These are the best of the many photos we inflicted on these very patient subjects. 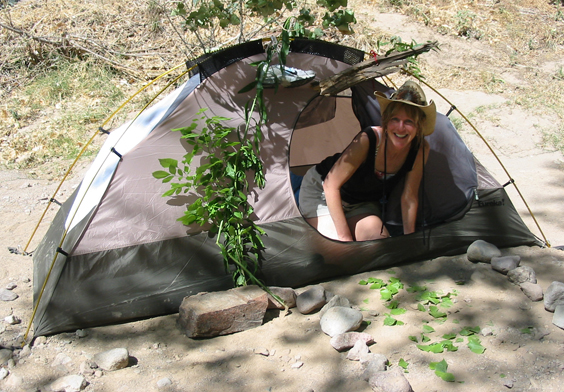 Once again, we appreciated that Western diamondbacks politely give plenty of warning before striking. And check out this cool yellow-green grasshopper! 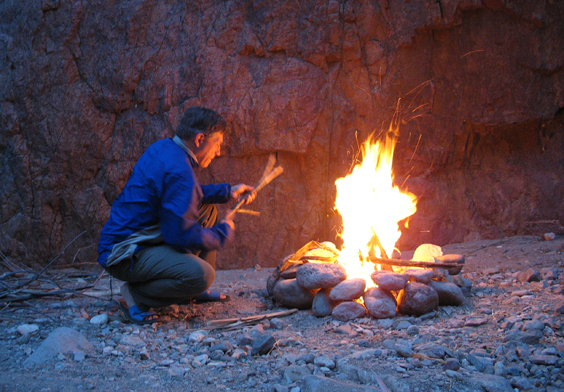 We knew there were at least two large groups in the canyon, so we camped on a gravel bar by a nice swimming hole about one mile short of Horse Camp. Kathy pitched her tent and then promptly redecorated. At dinner, we found out she was packing enough food for a party of 12 (mystery solved). And speaking of party, David had packed in a full bottle of wine and left it to chill in the river! 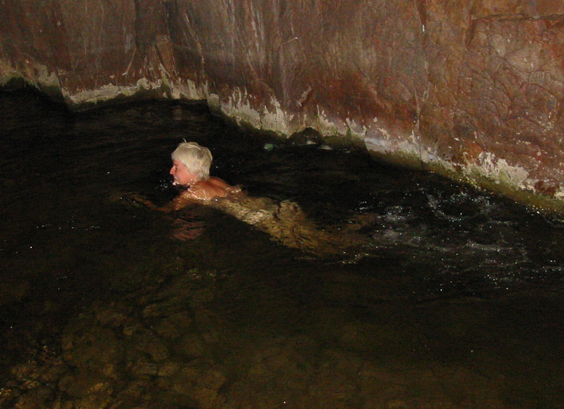 It was one of the most beautiful nights any of us had spent outdoors. The temperature was a balmy 65 degrees. We had a great view of the stars, and the only sound was the babbling and gurgling of the stream. And the splashing of an occasional dipper. 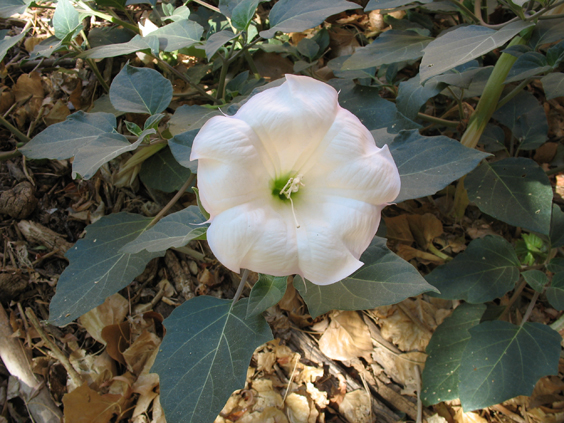 Dennis and I camped in a field of Datura, and several of them opened as soon as it got dark. 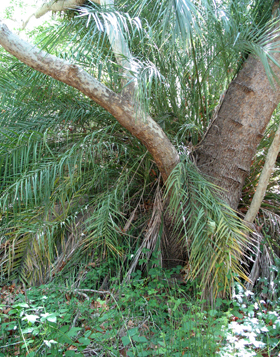 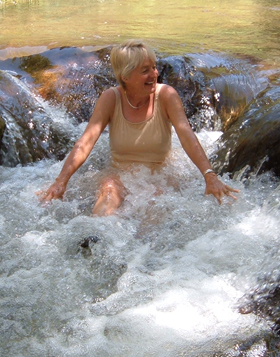 In the morning we explored a small side canyon with a permanent stream. I could swear there were palm trees at the mouth of the canyon. 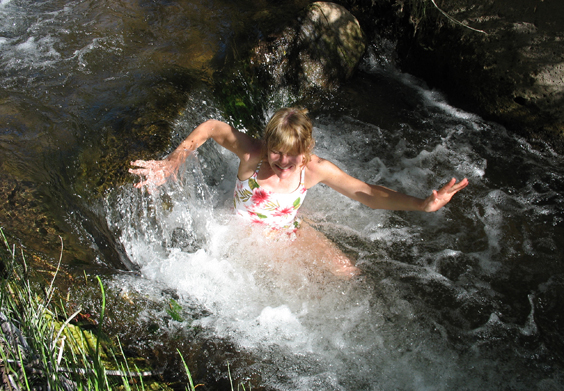 We took our time hiking out, stopping as always to sample as many swimming holes as possible. Even Kathy couldn't resist the natural Jacuzzi. 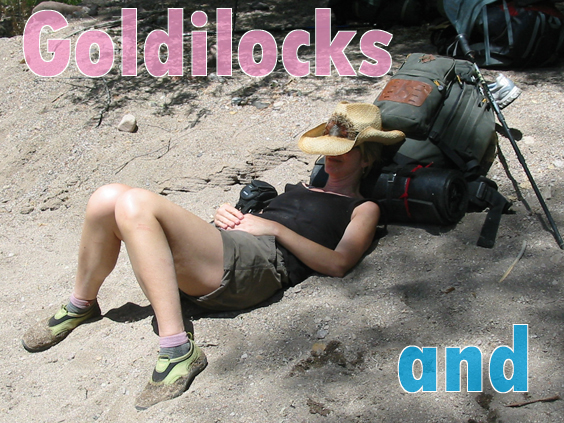 But mostly Dennis and David and I dipped while Kathy hid under her hat (or took pictures on the sly), because we're .. 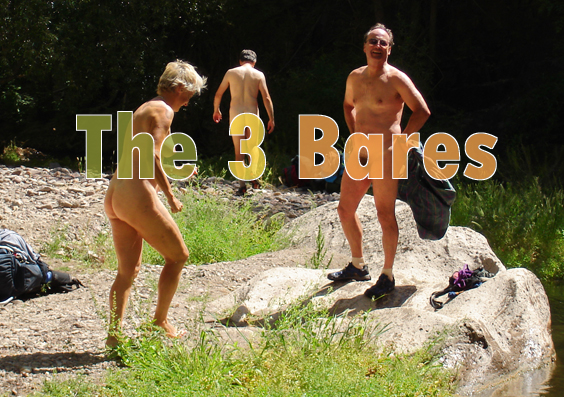 ... Goldilocks and the Three Bares!