Last August after an amphibious hike in Wet Beaver Creek, we made a side trip to the V-Bar-V Petroglyph site, where we were dazzled by a single panel that contains more than 1000 petroglyphs. Our very well-informed guide hinted that there was an equally impressive collection of petroglyphs to the south in Agua Fria National Monument.

Agua Fria is one of our newest and most remote national monuments. Created in 2000, the Monument contains some 450 archaeological sites scattered over 111 square miles. Major sites include the the ruins of seven ancient pueblos that are mostly rubble today, but which once contained dozens or even hundreds of rooms.

This windswept plain seems an unlikely location for a thriving civilization, but the mesa is cut by steep canyons with reliable streams supporting a rich variety of plant and animal life. The area was settled by the Hohokam at least as early as 1000 AD, but in the early 14th century, a group of Western Anasazi known as the Sinagua moved into the areas in large numbers.

The Sinagua hunted and farmed on the mesa, and covered the basalt cliffs just below the mesa with thousands of petroglyphs. The site has been extensively studied by astronomers and archaeologists, and some have concluded that one particularly striking image depicts the Supernova of 1054.

The Supernova of 1054 was about four times brighter than Venus and was visible during daylight hours for 23 days. Its appearance was noted by Chinese astronomers, and was probably also recorded by the Anasazi at several sites in Arizona and New Mexico, including Chaco Canyon.

The exact location of the Supernova petroglyph is a carefully-guarded secret, but piecing together various reports and photos, we developed a theory. And one glorious late November weekend, we put that theory to the test. 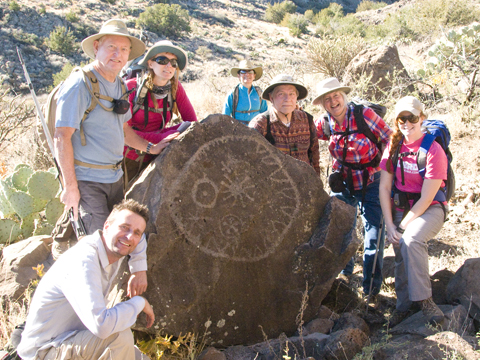